In the Delta, a rapidly disintegrating mangrove forest

Although the Ayeyarwady Delta plays host to the country’s largest remaining area of mangrove forest – 46 percent – here, too, the unique trees are rapidly disappearing and the impact has been devastating. Over the past three decades, about 83 percent of mangroves in the area have been lost, according to Win Maung of Myanmar Environmental Rehabilitation Network. Other estimates are slightly more conservative, at 75 percent.

Myanmar is a known hotspot in Southeast Asia for mangrove loss from aquaculture, agriculture, and logging. As one of Myanmar’s most densely populated areas with an estimated population of 7.7 million, much of Ayeyarwady Delta’s tree loss is caused by human beings. 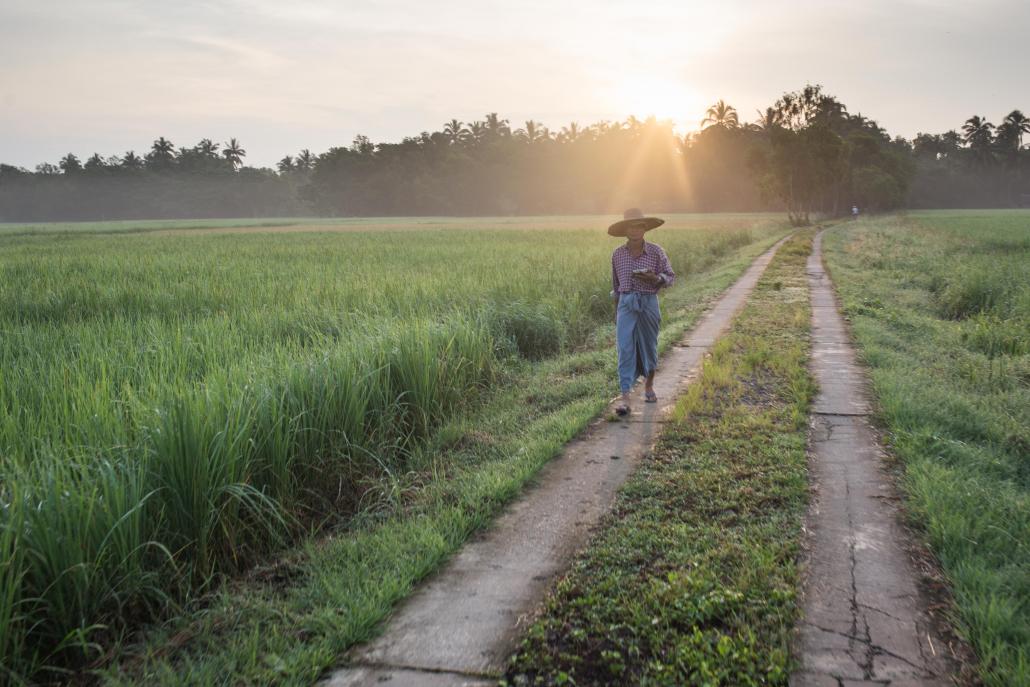 Thirty years ago Ayeyarwady Region was covered in mangrove trees, but due to economic needs the land has now largely been converted into rice paddy fields. (Ann Wang / Mongabay)

What is left of mangrove forests across the delta’s expanse of 13,500 square miles wasn’t enough to play the natural role of buffer when the deadly 2008 Cyclone Nargis hit. The sturdy trees have hardy, massive roots that grow in thick mud and partially above ground and are extremely resistant to high winds and flood waters. Had the Ayeyarwady Delta mangrove forest been intact in 2008, experts believe that thousands of lives could have been saved. Instead, Nargis killed more than 138,000 people.

Today, one small solid tract of mangroves remains nestled in a wildlife sanctuary.

“When you look at Google Earth, there is only one green area left in Myanmar’s Ayeyarwady Delta and that is Meinmahla Kyun Wildlife Sanctuary (MKWS),” said Narissa Bax, a Marine biologist for Fauna and Flora International Myanmar. MKWS is an approximately 53-square-mile wetland mangrove reserve located in Bogale Township in Ayeyarwady Region.

Meinmahla, which means beautiful woman in Burmese, is an area known for its diverse mangrove tree species and saltwater crocodiles. The sanctuary was established in 1986. However, it has been described as one the most degraded mangrove systems or national parks many researchers have ever seen.

Poverty among area villagers, a lack of proper management, and agricultural development are all part of the problem.

In a report published by Fauna and Flora International Myanmar in August 2016, Jean W.H Yong, a mangrove consultant with a background in mangrove plant biodiversity surveys and sustainable agriculture development said as much. According to Yong, MKWS has highly disturbed mangrove forest vegetation with extant pockets of high mangrove floristic diversity. 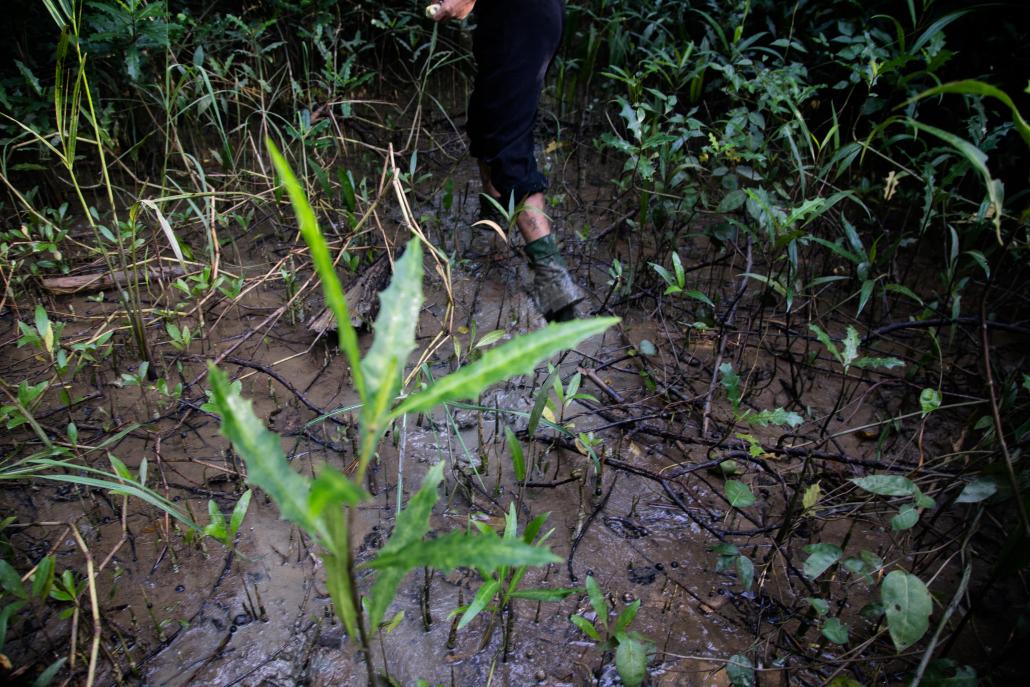 A mangrove forest at MSN island, where groups hope to use the land as an educational centre and nursing ground for various mangrove species. (Ann Wang / Mongabay)

In other words, the highly diverse forest is suffering from intensive deforestation due to human activities.

An undisturbed and old-growth mangrove forest cannot be found at MKWS, according to Yong’s report. Despite the man-made disturbance, MKWS still contains an impressive 29 species in a relatively small area within Ayeyarwady Region.

The report also identified the reasons for deforestation at MKWS and the surrounding area to conversion of land for rice fields, an activity promoted by the government as a way to ensure self-sufficiency in food production, and firewood collection for cooking, shrimp and fish drying, and as a commodity to sell at firewood markets at Bogale and Yangon.

MKWS and the surrounding area was all mangrove forest before being converted into rice fields around 40 years ago, and villagers rely on rice farming, fishing and collecting wood from the sanctuary for livelihood.

“It’s not a situation where you can blame villagers for such behaviour, this is the system that we are working with, especially after Cyclone Nargis, people are extremely disadvantaged and rely heavily on the sanctuary,” said Flora and Fauna’s Bax.

“People simply do not have the means to live beyond human needs and survival.”

There are no residents at MKWS, but there are more than 30 villages on the two riverbanks surrounding it. At one of the villages called La Wine, scenes of poverty are hard to miss. With an estimated population of 600 it is just a 15-minute boat ride across the river from MKWS. Huts built with bamboo act as shelters for families, and there is no electricity or gas, let alone enough chairs or tables – which are moved between homes and the elementary school. Bundles of wood can be seen piled up waist-high by the river bank.

“Those are for household use, for cooking,” almost all villagers say when asked about the wood. Myanmar currently has a logging ban in place that prohibits commercial logging. 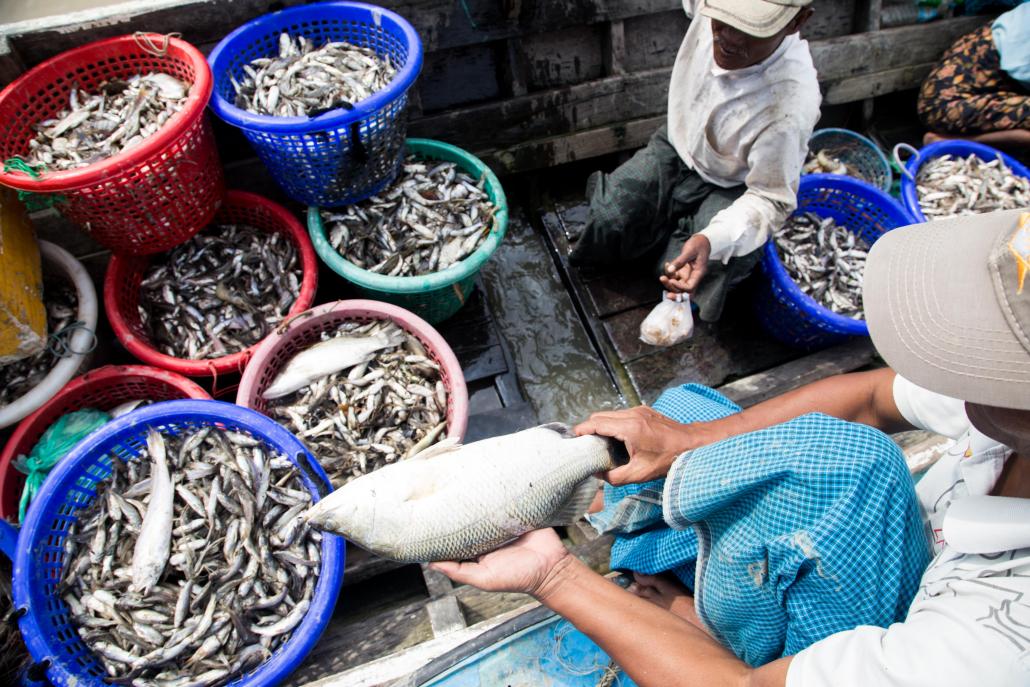 The majority of villagers living in the Delta region are fishermen or rice farmers. (Ann Wang / Mongabay)

“To prevent another major natural disaster, the Department of Forestry told us if you want to cut trees, you have to plant one,” said U Hla Moe Aung, a 42-year-old rice farmer, as he pointed at rows of trees in front of his house which he has planted over the years. He lost his wife and children during Cyclone Nargis.

There are other problems, too. The river is literally swallowing up land.

“Three months ago, someone’s house was there,” U Hla Moe Aung said as he pointed at a piece of land that has become part of the Bogale River. Deforestation is causing the river bank erosion in villages throughout this region. Walking through his village on temporary roads built by sand bags, U Hla Moe Aung shares a dire prediction.

“The government said at this rate, our village will be gone within four years, and we will all have to find a new place to live,” he said.

Planting for the future

Village residents, as well local and international non-profits groups and Myanmar’s Department Forestry are all contributing to planting mangroves in an effort to avert a crisis.

“We plant an average of 450 acres of mangroves in this region every year,” said U Ohn Kywe, a ranger stationed at Bogale with the Department of Forestry. Yet he is frustrated with the process.

“It’s not easy doing the plantation due to the cost of labour, and the land that we are able to plant mangroves on is usually far from each villages, that also adds up the transportation cost.”

Piles of confiscated wood surround the Forestry Department’s office. U Ohn Kywe explained that MKWS is a big area and they simply don’t have enough staff to do patrols, but they try their best.

“It’s a lot of work with very little budget, but we have to do it, because you never know when will the next natural disaster come again,” he said.

“Everyone at the villages you just went to is a wood smuggler,” said U Myint Win, a 38-year-old taxi boat driver who is also part of a local non-profit doing patrols around MKWS. “They take wood from the sanctuary and sell it to middleman or traders.”

U Myint Win says that it’s not even profitable.

“Wood is not a good business, especially around here where all big trees were damaged during Nargis,” he said. “One arm’s length branch can be sold for 20 kyats (about 0.01 cents US) within the village, but the price can be 80 kyats (about 0.06 cents US) when sold in the city, and the thicker the wood is the higher the price.”

None of it is worth even close to ten cents a bundle.

U Myint Win has been a boat driver here since 1999 and has long seen villagers selling the forest off just to survive.

“It’s not a good business at all, but villagers here have no other options. Many of them are rice farmers and fishermen, but the majority of them don’t have the capital to invest in equipment, and earn very little profit.”

He also thinks that because bribery is rumoured to be so common among law enforcement officials, it leaves room for the smuggling business to continue.

“But I can’t be angry at the villagers, if I don’t have this taxi boat to drive, I’ll be doing the same business as them, everyone has to find a way to make a living,” he said.

This article was originally published at Mongabay. Piles of confiscated wood can be seen surrounding the Forestry department’s office at Bogale in Ayeyarwady Region. (Ann Wang / Mongabay)