In search of the great bell

Recent efforts to salvage the Dhammazedi Bell using superstition-laden traditional methods have brought ridicule from some quarters, but for many Mon people it is no laughing matter.

IT’S ONE of Myanmar’s enduring mysteries: The fate of the Dhammazedi Bell.

The bell was reputedly cast in the 15th century by King Dhammazedi, who ruled the Hanthawaddy Kingdom from 1471 to 1492. Made from copper, gold and silver, contemporary accounts said it weighed about 300 tonnes, making it the heaviest in recorded history.

It was placed at Shwedagon Pagoda, in Dagon (now Yangon), which at the time was a small outpost of the Mon kingdom based at Bago.

Having been kept at this sacred site for more than 100 years, the bell disappeared in the early 17th century.

Portuguese adventurer Filipe de Brito e Nicote, known in Myanmar as Nga Zinga, had by then become governor of Syriam, now Thanlyin, across the Bago River from Dagon. In 1608, he looted the Dhammazedi Bell, planning to take it to Syriam to melt it down to make cannons.

On its journey across the Bago River, the barge on which the huge bell was being carried sunk near Monkey Point, where the Bago and Yangon rivers meet.

It has not been seen since.

Some people question whether the bell really exists at all, but it is a story that has captivated imaginations for decades.

The story often re-emerges at times of political tension. Many believe this is a tactic used by politicians to distract the public from other issues taking place in the country. 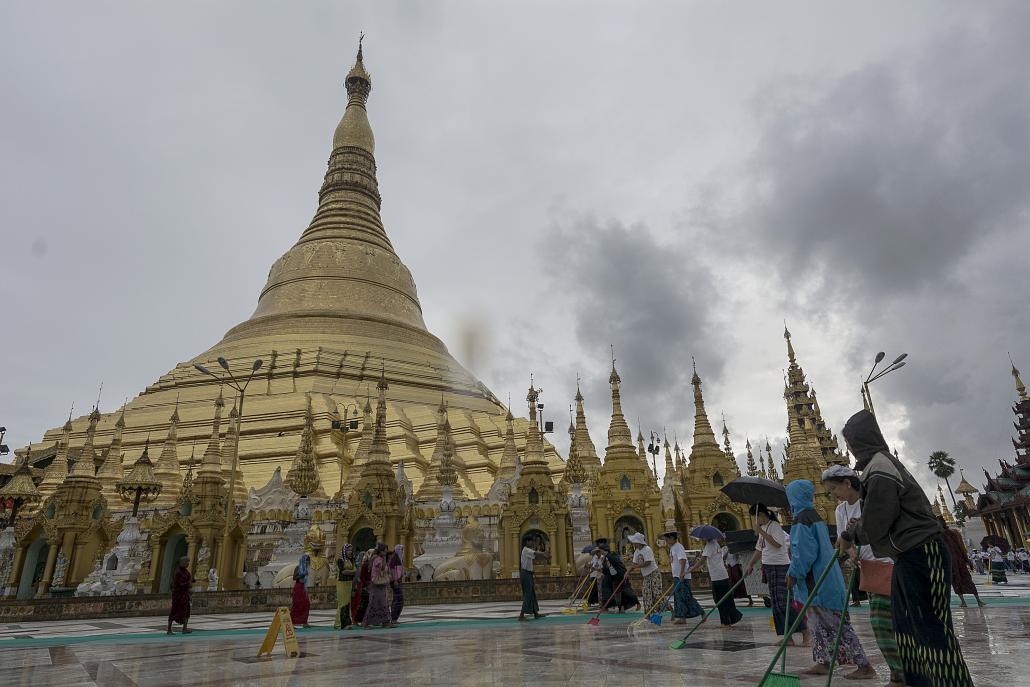 Shwedagon Pagoda, where the Dhammazedi Bell was located before it was looted in the 17th century. (Teza Hlaing / Frontier)

On September 5, 1987, former strongman U Ne Win announced the demonetisation of 25, 35 and 75 kyat notes. In a cash-based economy, this wiped out the savings of much of the population and was a potential spark for unrest against the floundering socialist regime.

Shortly after this event Ne Win announced plans to retrieve the Dhammazedi Bell. But with the country’s economy in bad shape, the tactic backfired. Within months nationwide anti-government protests began, leading to Ne Win’s resignation on July 23, 1988.

July 19, 1997, was the 50th anniversary of Martyrs’ Day. It is a time when the country comes together to commemorate the lives – and sacrifices – of its independence heroes, most notably Bogyoke Aung San.

Aung San’s daughter, Daw Aung San Suu Kyi, was at that point being kept under house arrest at her home on Inya Lake. That year the authorities permitted her to visit the Martyrs’ Mausoleum, in the shadow of the Shwedagon Pagoda, to lay a wreath.

The same day, state-owned newspapers ran front page stories of Khin Nyunt visiting the site where he said the Dhammazedi Bell had finally been found, at the confluence of the Yangon and Bago rivers, thus drawing attention away from Aung San Suu Kyi’s visit to the mausoleum. Over the next two months, consistent coverage was given to the apparent discovery.

It was a time of significant tension for the military government. The United States had less than two months earlier introduced a ban on new investment in Myanmar, while the Association of Southeast Asian Nations was under international pressure to block the country’s membership application. Domestically, food and commodity prices were at record highs, and the government had been forced to reject rumours that another demonetisation was about to take place. 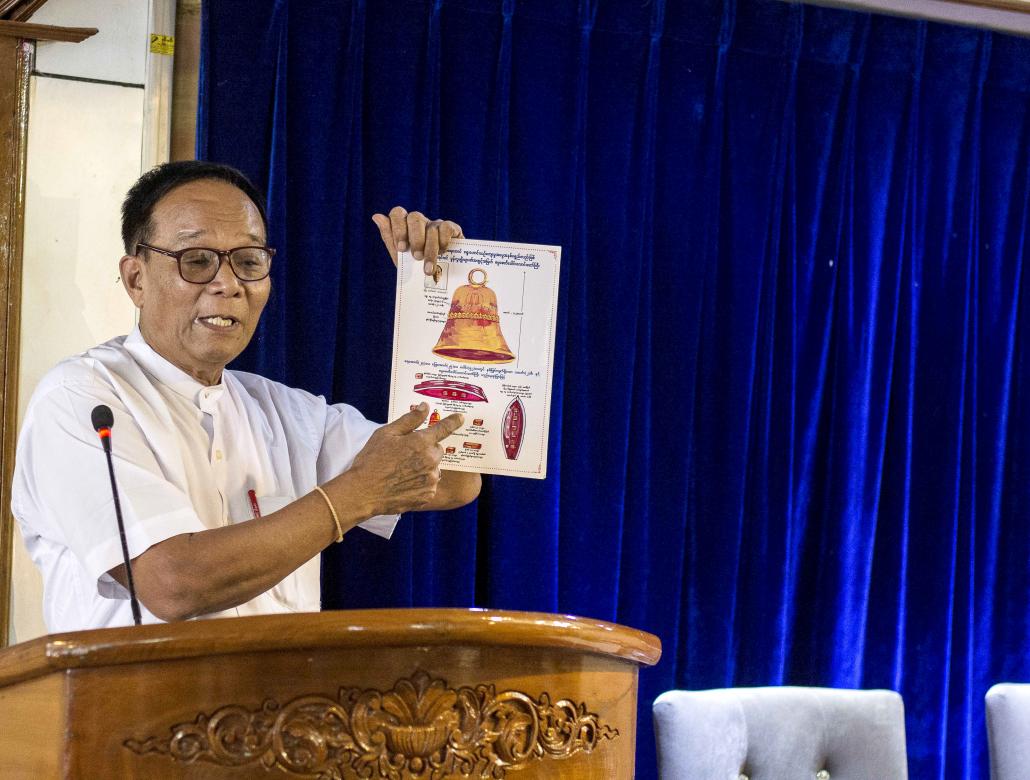 U San Linn, who is leading the latest efforts to find the famous bell. (Teza Hlaing / Frontier)

If the bell was recovered, it would be a great source of pride for the country, the government claimed at the time.

Then, on September 29, all news of the bell disappeared from the state newspapers, which went back to mundane frontpage stories of generals touring the country.

“General Khin Nyunt, an ardent believer in astrology, followed the advice of astrologers instead of trying to retrieve the bell using a modern scientific method,” said Naing Ye Zaw, joint secretary of the Mon Historical Research Society. “He was influenced by a female astrologer and followed her advice.”

The issue returned to public attention under President U Thein Sein’s tenure. In August 2013, U Than Swe, a deputy minister of culture at the time, told the lower house of the national legislature that a Singapore-based company called SD Mark International LLP had made a proposal to retrieve the bell in 2010, at a cost of US$10 million. The bid had been rejected by the government.

Despite some questions about its existence, Naing Ye Zaw says he firmly believes that the Dhammazedi Bell exists. He would like to see it returned to Shwedagon Pagoda, he said.

He pointed to the Kalyani Inscriptions as evidence of the bell’s existence. The stone inscriptions were commissioned by King Dhammazedi and placed in an ordination hall near present-day Bago. While this building was later destroyed by both Portuguese and then Konbaung forces, surviving palm-leaf manuscripts reference a large bell that was donated to Shwedagon Pagoda.

“This is not good for Mon people and it is bad for national unity. Nobody knows where the bell is yet. But it is more than a bell. It is political.”

However, Naing Ye Zaw criticised those who have led previous discovery attempts, saying they had been motivated by a desire for publicity and used outdated methods. He said scientific analysis and modern recovery techniques would speed up the process of finding the bell.

“Even if you know where the bell was dropped 500 years ago, it could not have stayed where it was,” said U Charlie Than, a marine expert who has been involved in discussions about finding the bell. “The river’s course changes an average of 12 miles [19 kilometres] every 100 years, so it might have moved at least 50 miles [80km] in more than 400 years,” he said.

In 2014, a new team offered renewed hope that they had pinpointed the bell’s location. However, their methods were controversial. U San Linn, who led the team, believed a spiritual, rather than scientific, approach was required, because dragons were protecting the bell.

Nevertheless, the search prompted great excitement, particularly when San Linn told the media the bell had been found.

The bell hunt became front page news in many of Myanmar’s most popular private newspapers, pushing stories about the anniversaries of 1988 and the 2007 Saffron Revolution to the inside pages.

The country waited weeks for the team to produce some evidence that it had found the object. None was forthcoming. Many concluded they had been duped.

“It showed the weakness of journalism in Myanmar in those days,” said Ko Thit Nyein, an instructor of journalism and freelance editor. “Newspapers were not able to give guidance to the readers,” he said.

Now San Linn is back. On June 21, he held a press conference to announced plans to restart his search, pledging to return the bell to Shwedagon Pagoda within a few months.

Attempts in 2014 failed because some of the team’s divers made mistakes, he said.

“They had reached the mouth of the dragon hole in search of the treasure of Kingdom of Dragons,” he said at the news conference.

This time, San Linn’s approach has brought widespread ridicule. One wit commented on Facebook that “The UK left the EU because U San Linn is restarting his discovery,” a reference to the United Kingdom’s referendum vote to leave the European Union on June 23.

It might be a joke for some, but it is no laughing matter for Naing Ye Zaw.

“This is a tragi-comedy for Mon people,” he said. “King Dhammazedi, who donated the bell, was an important king in Mon history and the Dhammazedi Bell is significant in Mon culture.”

More seriously, San Linn’s actions have created doubt in the minds of some as to whether the bell even exists.

“This is not good for Mon people and it is bad for national unity. Nobody knows where the bell is yet. But it is more than a bell. It is political.”

A dredging ship used by a local salvage team in the search of the missing Dhammazedi Bell makes its way along the Yangon River. (Ye Aung Thu / AFP)