In northern Rakhine State, a standoff over citizenship guarantees

A standoff over citizenship guarantees and concerns about safety have diminished the likelihood of large-scale repatriation, with government officials saying Rohingya demands are “impossible”.

THE SPRAWLING Hla Pho Khaung transit camp is supposed to be the centerpiece of Myanmar’s repatriation effort – a tangible sign of the government’s preparedness and commitment to welcoming back refugees.

Featuring row after row of semi-permanent shelters, Hla Pho Khaung has the capacity to house up to 30,000 people. It is here that refugees who return from Bangladesh will be sent after passing through one of two reception centres.

But the shelters have been built from a type of plywood; in the heavy Rakhine monsoon, they never really stood a chance. The veneer coating has begun peeling off, exposing the water-damaged timber. On one building, the door – also made from plywood – was hanging wide open. From side on, we could see why: it was so warped that it would never be able to close.

Asked about the state of the buildings, camp director U Soe Shwe Aung said they were being repaired. Frontier wasn’t able to examine all of them, and it’s likely those on the edges of the camp that were most visible to reporters had borne the brunt of the weather. Still, the sorry state of the buildings is an apt analogy for the repatriation programme more broadly, where so much time, effort and money has been expended for so little progress.

And then there are the newer additions to the camp: 90 or so small, durable portable buildings that are each designed to house a single family. Provided by China Aid and unloaded from large ships at Kanyin Chaung near the site of a planned economic zone, they are a sign of China’s growing influence over the repatriation process. 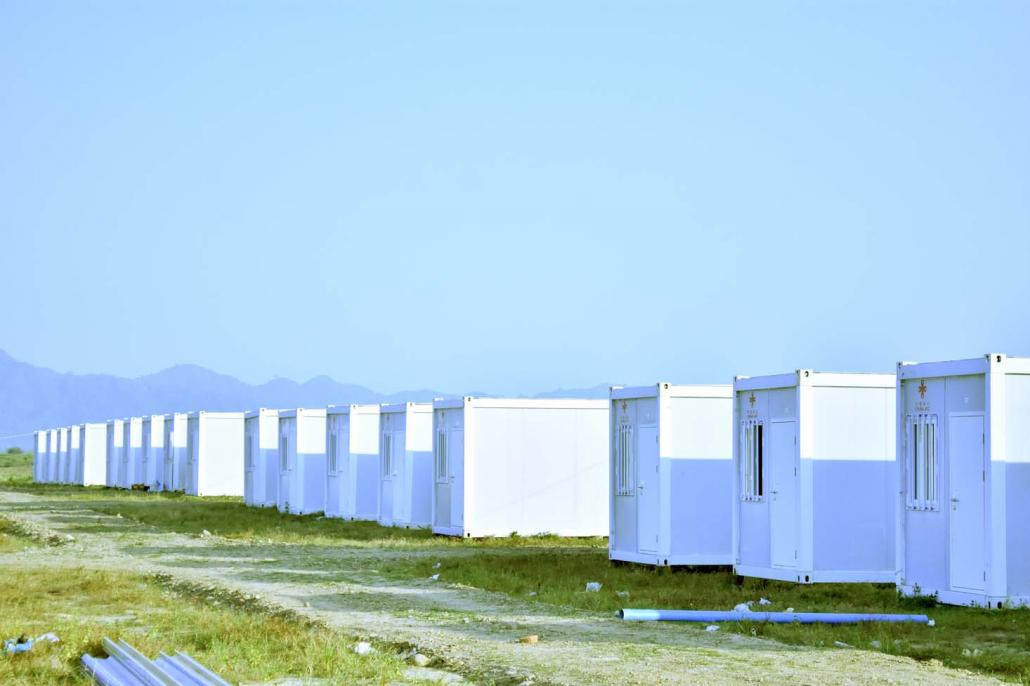 Soe Shwe Aung said the government expects 1,000 more of these portable homes will be delivered to the camp. “When [refugees] arrive, they will be taken care of and protected by the police for their safety,” he said.

Of course, it might not matter what condition the buildings at Hla Pho Khaung are in, because there is little to suggest that any of the 720,000 Muslim Rohingya refugees in Bangladesh are about to return and make use of the facilities.

Repatriation of up to 2,200 verified refugees from Bangladesh was supposed to get underway on November 15 under a bilateral agreement reached in late October.

The Myanmar government agreed to accept up to 150 refugees per day but none of those verified has returned to Myanmar and Bangladesh has so far opted against forcing them back.

The United Nations and other international groups have warned that conditions in northern Rakhine are not conducive for the safe and dignified return of the refugees, most of whom fled Myanmar in late 2017 following attacks by the Arakan Rohingya Salvation Army that prompted the military to launch brutal clearance operations.

When Frontier visited Hla Pho Khaung on November 16 as part of a government-arranged media trip for Myanmar-based media organisations, the camp was almost deserted. Aside from camp officials, we encountered a handful of Muslim men who were congregating around a block of toilets.

Naw Gmawlar, 25, said he came from Inn Din village, which has gained notoriety as the site of a military massacre of 10 Rohingya men that was uncovered by two Reuters journalists who are now in prison.

However, Naw Gmawlar wasn’t in the village to see the attacks. He said that in 2012 he was convicted of several offences, including section 13(1) of the 1947 immigration act for illegally entering or exiting the country. After serving more than five years in Buthidaung Prison, Naw Gmawlar was released under a presidential amnesty in January 2018, he said.

He discovered his family had fled to Bangladesh several months earlier, shortly after the August 2017 ARSA attacks. The Muslim section of his village had been destroyed.

“I’ve had not contact with them,” he said. “I’ve got no idea when they will come back.”

A key obstacle to repatriation is citizenship. The 12 journalists on the trip were taken to a reception centre at Taungpyo Letwe, on the border with Bangladesh. As has become a ritual of these media trips, we were introduced to a row of immigration officers who were ready to process those who return, and shown the equipment set up to collect their biometric data.

Returnees will be forced to enroll in the government’s National Verification Card scheme, through which their application for citizenship will be considered.

Officials said that their citizenship applications will then be reviewed by the Ministry of Labour, Immigration and Population.

U Thant Zin, the deputy director of the Immigration Department for Maungdaw District, said it was impossible to estimate how long it would take to make a decision on citizenship applications.

Speaking at the Taungpyo Letwe reception centre, Thant Zin said the process would “take some time … it’s not an easy task that can be done right away because it is concerned with national security”. 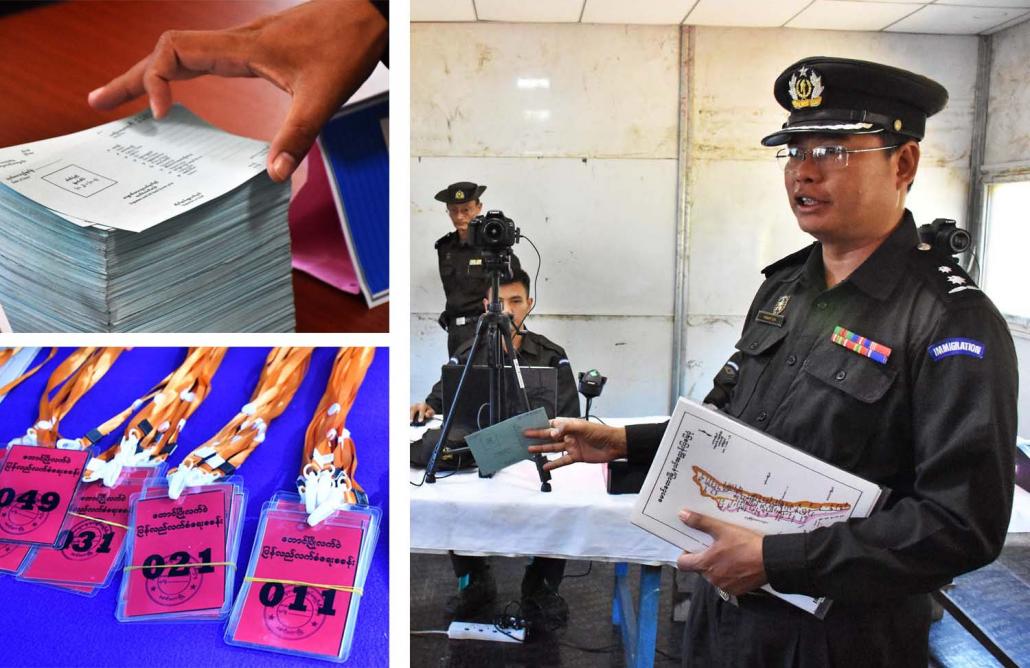 the form that returning refugees will be required to complete. (Steve Tickner | Frontier)

Rohingya community leaders have rejected the NVC process and said refugees will only return if the Myanmar government restores their “full citizenship rights”.

“The promises made by consecutive Myanmar governments concerning the reinstatement of full citizenship have never been implemented,” the Arakan Rohingya Society for Peace & Human Rights said in an October 31 statement.

But Maungdaw District administrator U Soe Aung said that the refugees’ demands were not in line with the Citizenship Law.

Soe Aung said government records showed that Maungdaw District previously had a population of more than 800,000. He said the government believed only 300,000 had left since August 2017, well below the 720,000 that the UN High Commissioner for Refugees says have fled to Bangladesh.

“The government has details for those who lived in Rakhine State in 2016. Only those people will be accepted back … it’s certain that not all of them are from Myanmar,” he said.

Those who do return will stay at Hla Pho Khaung for up to one month, Soe Aung said, after which they will be allowed to return to their original home. That is, if it’s still standing. Satellite images show that hundreds of villages – the overwhelming majority Muslim – in northern Rakhine State were destroyed in the weeks and months after August 2017. The remnants have largely been bulldozed and in some cases security installations have been built where Muslim homes once stood.

Those whose homes have been destroyed will instead be sent to the closest “government-designated” area, Soe Aung said, of which 12 have so far been built.

“They will have to build their own house if they don’t like the one the government builds for them,” he added.

Journalists were also taken to an area known as “No Man’s Land”– a small patch of land that is under Myanmar control, but outside its border fence, and where around 5,000 people have sought refuge since August 2017.

As we approached the border fence, a large group of children could be seen playing in spite of the fierce midday sun. Curious as to who we were, they came closer and peered at us through the fence, laughing and smiling.

The adults wandered over, seemingly more hesitant. A 52-year-old man named Dil Mohammed, who said he was originally from Meidi village, about 5 kilometres away, agreed to speak with us. 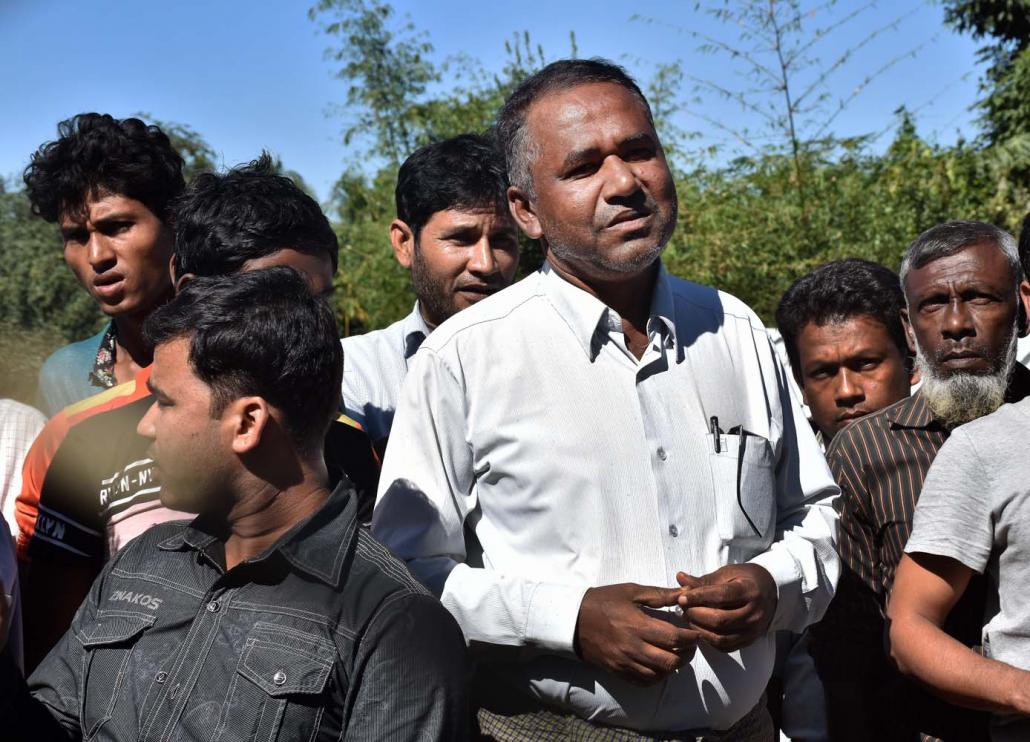 Dil Mohammed (centre) speaks to journalists at “No Man’s Land” on the Myanmar-Bangladesh border, where around 5,000 people have sought refuge since August 2017. (Steve Tickner | Frontier)

Conditions in the No Man’s Land camp are grim; the displaced people who live there rely on food provided by the International Committee of the Red Cross.

Dil Mohammed said they wanted to come back to Myanmar, but needed guarantees on safety and rights.

“Nobody wants to stay here for long time, because it is a dire condition, without proper access to live a daily life,” he said. “[But] at least, we live here safe.”

He explained that they wouldn’t come back unless the NVC scheme was scrapped, because in its present guise they would be considered foreigners if they enrolled. “We are citizens of Myanmar – our mother, father, and many generations of our ancestors are citizens of the country,” he said.

But he suggested there was some room for negotiation on citizenship, saying that even if the government fulfilled only “one to five percent” of their demands they would come back. “So far though they haven’t even met one percent … they are not sincere.”

“We need basic rights and protection, including our citizenship,” he said.

They are also concerned about the threat of prosecution if they return because the government might accuse them of being members or supporters of ARSA.

“We don’t like ARSA and any insurgent groups – we just want to live peacefully,” Dil Mohammed said. “Please inform our leaders – our president and state counsellor – to call us back to our homeland after fulfilling our needs and rights.”

There is little indication though that the government is contemplating a shift in policy to address the refugees’ demands. Maungdaw District deputy administrator U Ye Htut said the authorities in northern Rakhine would continue to wait for refugees to return until they received other orders from Nay Pyi Taw.

“Although no one has come back,” he said, “we are ready and will keep waiting.”