A measles outbreak that claimed dozens of lives has focused attention on the challenge of providing healthcare in one of the country’s poorest and least-accessible areas.

U PAR NWAN, 94, who lived in a remote village high in the mountains of northwestern Sagaing Region on the border with India, was one of the first to die.

He lived in Htan Khaw Lama village, about 65 kilometres (40 miles) from Lahe, one of the main towns in the Naga Self-Administered Zone.

When Par Nwan was buried according to Naga custom on June 6, none of the villagers expected that his death would be followed by dozens more. A measles outbreak in the area had claimed 68 lives by August 25, according to a response team working in Naga.

In Htan Khaw Lama, a community of 343 people, there were another 24 funerals within two months of Par Nwan’s death, including 18 for children aged under five.

The outbreak of the preventable but highly contagious disease highlighted the lack of development in the Naga SAZ, one of the poorest and least developed regions in the country. 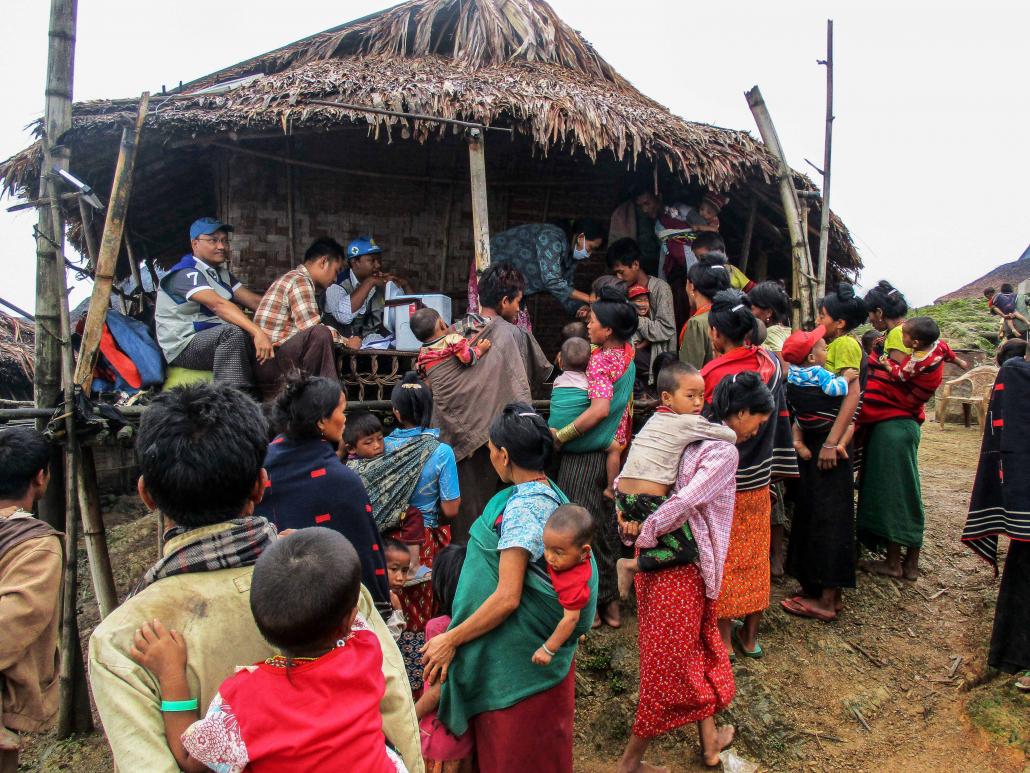 The SAZ was created under the 2008 Constitution and comprises the townships of Leshi and Namyun, as well as Lahe, its administrative seat. While a self-administered zonem the provision of healthcare remains the responsibility of the Union Ministry of Health. But ministry workers do not want to live in the isolated region. The Council of Naga Affairs says fewer than one third of the 309 ministry staff assigned to the SAZ live in the area.

Union Solidarity and Development Party MP U Sarr Mu, who represents Lahe 2 constituency in the Sagaing regional assembly and represented Lahe in the Pyitthu Hluttaw from 2011 to 2016, said that in 2012 there was only one government doctor in Lahe, which has a population of about 43,000. Residents seeking treatment to travel to Khamti, a return journey over the mountains of a day, or undertake a three-day trip by road to Mandalay.

“It is not the first time in the Naga region that people died en masse because of starvation and diseases,” said the Reverend Ksi Mu Khong, a Christian missionary who has lived in the area for nearly three decades. He said two cholera epidemics in the 1980s had each claimed the lives of more than 200 people, who were buried in mass graves.

Strict censorship under the military junta ensured that news of the epidemics in the Naga hills was never publicised. “When we reported such incidents to the responsible authorities, they asked for confirmation but did not provide any assistance,” Ksi Mu Khong told Frontier.

Communication in one of the most inaccessible areas of the country has long been a problem. The 2014 census found that there were only 1,200 telephones in the Naga region, or about one phone for every 102 people. Most phone connections are in the towns and news of health emergencies is dangerously slow to filter out of remote affected communities.

Naga organisations sharply criticised what they said was a slow government response after it learned of the outbreak.

Naw Aung Sann, spokesperson for the Council of Naga Affairs, told a news conference in Yangon on August 16 that it took 33 days for the news of Par Nwan’s death to reach a township-level administrative officer. He said it then took 48 days for the first medical team to reach Htan Khaw Lama. By that time, 16 people had already died.

“No assistance of any kind arrived until 40 people had already died,” Aung Sann told reporters. 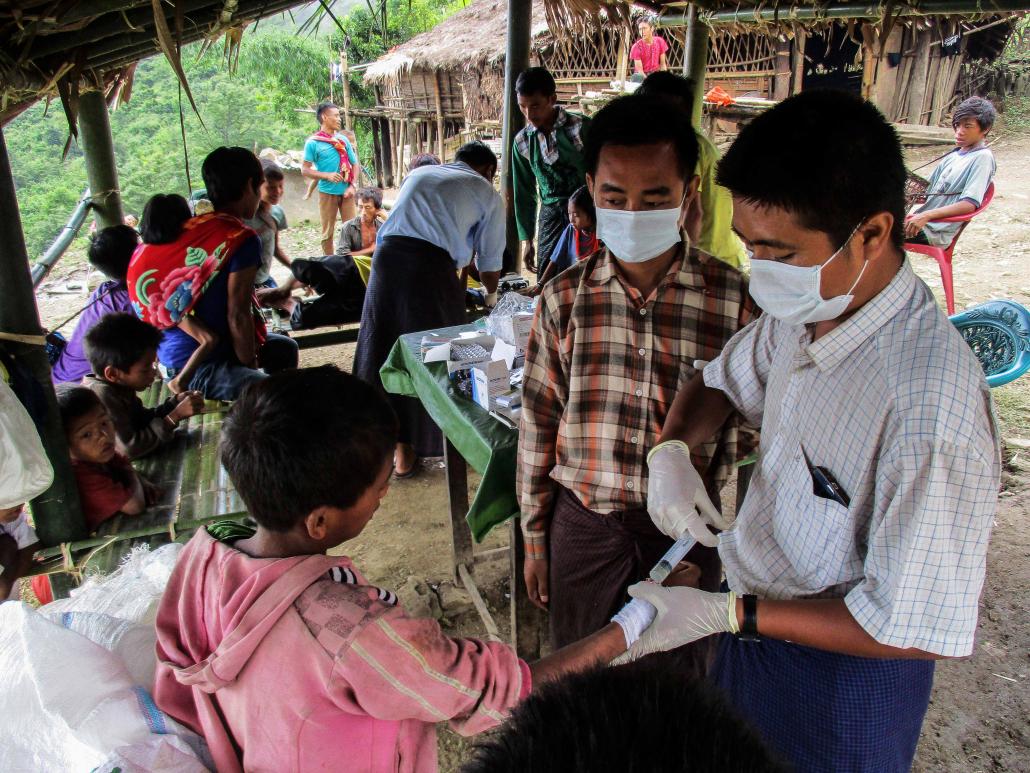 Dr Soe Lwin Nyein, director general of the Department of Public Health, said the Ministry of Health and Sports was alerted on June 20 about the deaths of 25 people from a contagious disease in the Naga region. The ministry confirmed on August 5 that the disease was measles and in a statement a week later said the outbreak was under control.

“The Ministry of Information posted on its Facebook page on August 6 that the outbreak had been controlled, but two more people died that day, so there was a discrepancy with the real situation on the ground,” Aung Sann said. 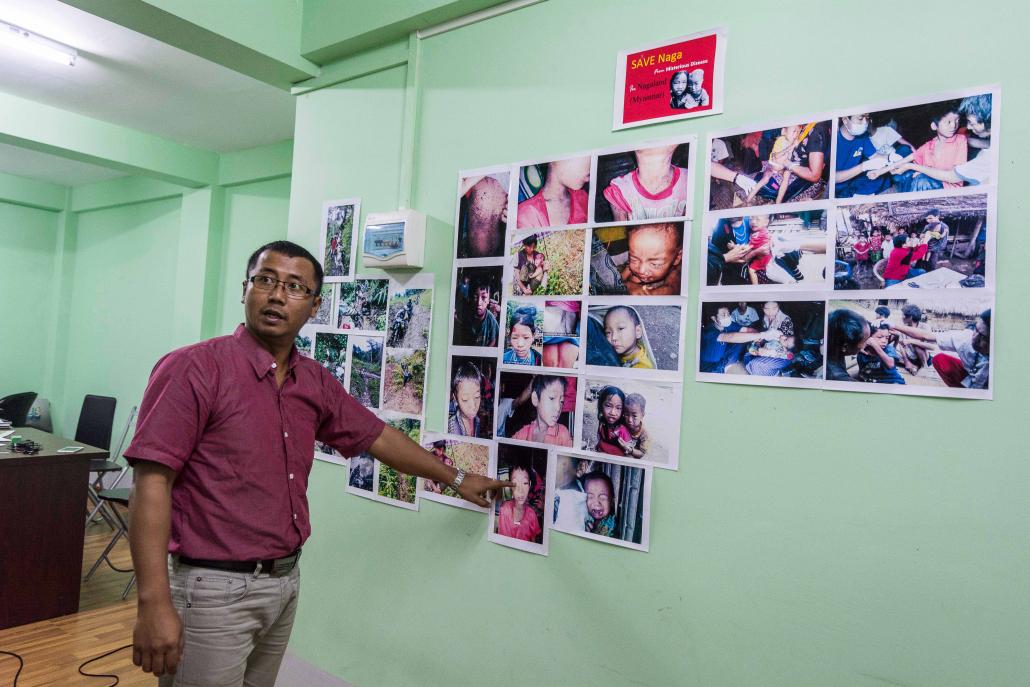 Naw Aung Sann, general secretary of the Council of Naga Affairs, points to photos of children suffering from measles on the wall of the council’s office. (Teza Hlaing / Frontier)

A government statement released on August 13 said a measles outbreak had also been reported on the Indian side of the border in May.

Meanwhile, government plans to send a team to the Naga SAZ to vaccinate residents against tuberculosis have been suspended because of fighting between Indian troops and Naga rebels operating from Myanmar territory.

The two sides had clashed in Lahe Township near Yan Kyein village, one of the communities affected by the measles outbreak, Aung Sann said.

He was referring to a cross-border raid at dawn on August 19 by Indian commandoes, who attacked a camp of one of the biggest rebel groups, the National Socialist Council of Nagaland (Khaplang).

The incident forced the health team, which was travelling in a convoy of motorbikes, to cancel a trip to the area.

Top photo: A measles outbreak in the Naga hills is thought to have been responsible for 24 deaths in the village of Htan Khaw Lama, pictured, in Lahe Township. (Dr Htoo Myint Swe / Frontier) 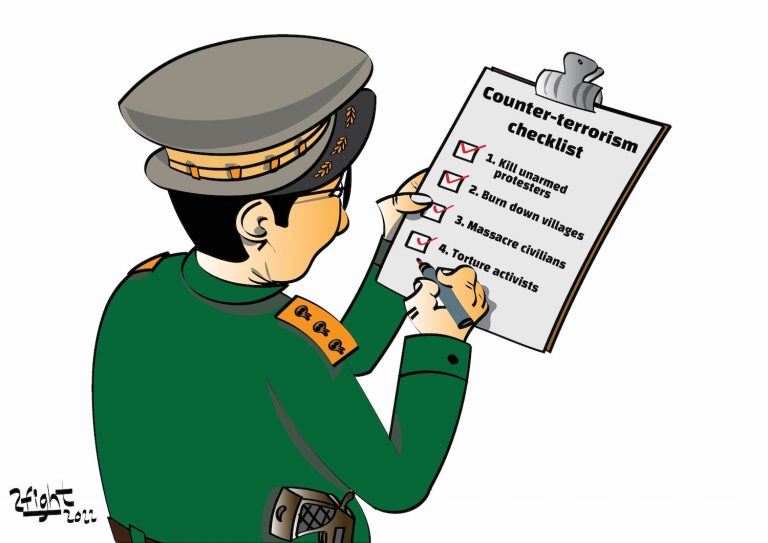