The decision to nominate U Myint Swe as Vice President does not inspire confidence in the military’s commitment to further democratic reform.

The National League for Democracy’s presidential candidate, since the election the subject of feverish speculation, was earlier this month revealed to be U Htin Kyaw, an educated and accomplished man who has been a faithful friend and acolyte of Daw Aung San Suu Kyi through the decades. He can be reliably trusted to exercise the party leader’s will as her proxy head-of-state in the years to come, or at least for as long as it takes to engineer a constitutional amendment to allow Suu Kyi to take the presidency herself.

The NLD’s decision to keep the name of its candidate secret until it was announced on the floor of parliament is yet another troubling sign of how the party operates. It has again been made abundantly clear that the NLD’s central executive committee makes all decisions of national importance, then presents them to party rank-and-file as faits accomplis. This is not sustainable.

The party has more than 800 lawmakers in parliaments throughout the country, answerable to millions of constituents, all of whom were promised last November that the election of an NLD government would be a panacea for all of the country’s countless ills. 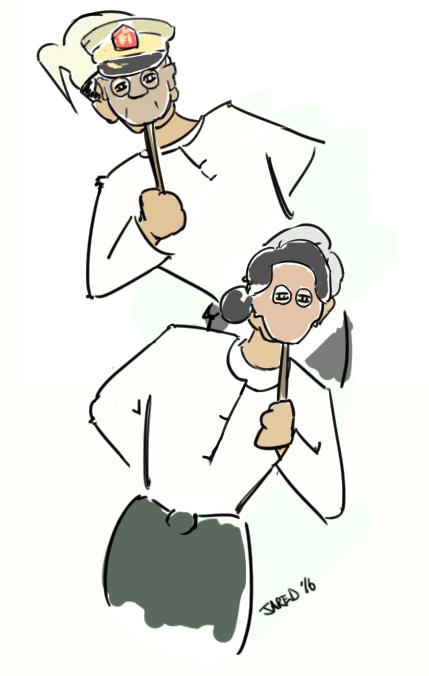 Even if the next government had an unlimited budget and the finest technical minds in the world at its disposal, many of these people would still be disappointed. For any neophyte NLD MP to buck the party line, in the process setting aside deeply ingrained loyalty to their party leader and risking certain recrimination and ostracism by their peers, seems all but impossible at the moment. That doesn’t mean it won’t happen one day.

Yet whatever criticisms can be made of the NLD’s conduct, once again they are trivial in light of the military’s actions. With the announcement on March 11 that parliament’s military bloc had nominated U Myint Swe for the vice-presidency, the Tatmadaw has signalled that it considers defending its own political role to be of far greater importance than acting as a good-faith partner in the next government.

The claim that former junta leader Senior-General Than Shwe remains an active participant in Myanmar’s political affairs since his official retirement has been a favourite trope of exile media editorials and local political commentators for the last five years. Cynics have scoffed, and yet U Myint Swe’s appointment has in one fell swoop breathed new life into these rumours; many US embassy cables have cited the close working relationship between the two men during the junta days.

Indeed, it is difficult to imagine a more provocative choice than U Myint Swe, short of nominating U Than Shwe himself. As Yangon Region Commander, he oversaw the arrest of General Khin Nyunt and briefly ran the military’s intelligence apparatus. He was responsible for the crackdown in Yangon during the 2007 protests. Rising to the Office of the Quartermaster-General before retiring from the military, he remains subject to US sanctions. His tenure as Yangon Region Chief Minister is under a cloud over the questionable awarding of a development contract for the Southwest New City Project.

The selection of a man referred to across the board as a “hardliner” also does not inspire optimism about the next appointees to head the ministries of Home Affairs, Defence and Border Affairs, the three cabinet positions appointed by the military.

The NLD has justified its shroud of secrecy over the party leadership’s internal discussions by claiming it did not want to antagonise the Tatmadaw during the transition to a new government. Outwardly, at least, the party has bent over backwards to suppress any criticism of the military from within its ranks and pursue dialogue with the armed forces in a spirit of deference, respect and reconciliation. If this was the military’s reward, the NLD will soon learn to beware all men in uniform bearing gifts.