The toll of conflict on individuals and whole communities is revealed in documentaries submitted to a recent film competition.

HOPE OFTEN collides painfully with reality, especially in the politics of Myanmar. But eight works that were nominated for awards at a recent documentary film competition were a reminder that young people – including the films’ directors and their real life characters – are still resolute in their pursuit of peace despite decades of civil war and communal strife.

The competition is organised every other year by the Yangon Film School and the Goethe Institut, Germany’s centre of cultural diplomacy in Myanmar. The theme this year was “youth and peace in conflict”. All eight documentaries were directed and produced by students at YFS, a prototype of a multi-ethnic film institution. More than 14 ethnicities are represented at YFS, at which about 40 percent of the students are not Bamar. Most of the stories are inspired by the places where the directors grew up, ranging from a small village in the mountains of southern Shan State to the religiously segregated wards of Sittwe in Rakhine State. This creates an intimacy between the directors and the issues portrayed.

The four award-winners were shown at the YFS’s annual screening on November 27 at the Goethe Institut in Yangon, but all eight nominees have been released as DVDs. Here, I review four that stood out, including two that won awards and two that didn’t.

The winner of the competition’s second prize, the Ruby Award, moves between the divided communities of Sittwe. In the Rakhine capital, Buddhist, Muslim and Hindu communities lived side-by-side before communal rioting in 2012, after which Muslims were moved to closed camps outside of the city or confined to the heavily guarded ward of Aung Mingalar.

Director Ma Shin Thandar grew up in Rakhine and the film could have offered the view of an insider. However, Shin Thandar seems to have purposely chosen the perspective of a curious stranger. The documentary mainly follows the lives of a young Hindu couple, who, despite not suffering the same physical confinement as Sittwe’s Muslims, are nonetheless marginalised and isolated in a context of fervent nationalism among the Rakhine Buddhist majority and sharp distrust between communities. The husband is sometimes assaulted in the market where he works as a labourer because he is mistaken for a Muslim.

From the world of Sittwe’s Hindus, the camera also peers into the lives of the Muslim community, where children younger than seven have spent their whole lives cut off from their neighbours of other religions by barbed wire and armed guards. In one scene, we catch a glimpse of what’s been lost: A teenaged Muslim boy looking towards the camera is asked, “Do you have friends on the other side?” The question barely needs answering.

More surprising is the response when, near the end of the film, the wife of the Hindu couple is asked how she understands peace. The camera locks on the woman’s face while she ponders the question. Then suddenly, yet softly, she replies, “Peace? I don’t understand it.” 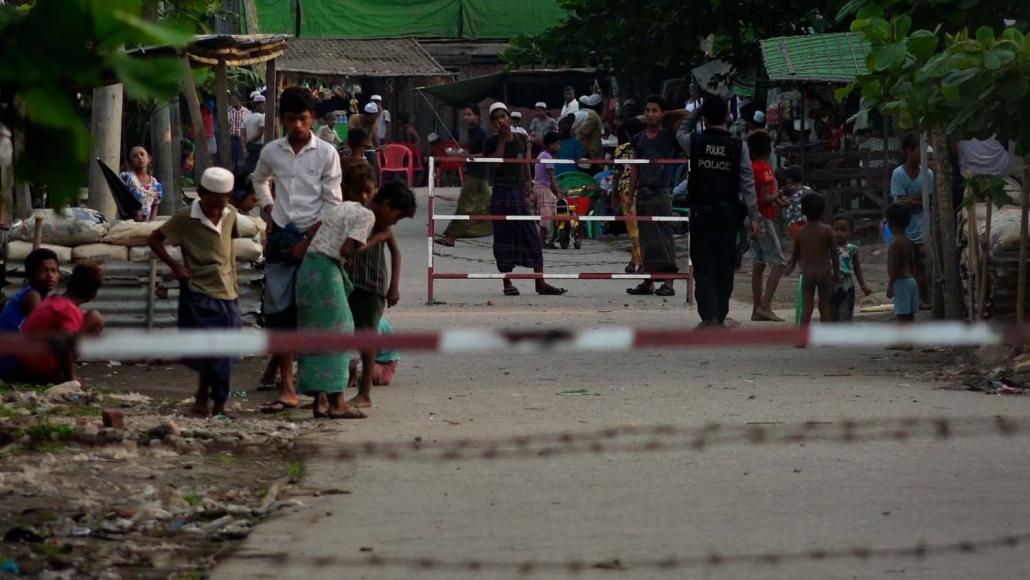 Still from the film Worlds Apart showing Aung Mingalar ward in the Rakhine State capital Sittwe, where Muslims are segregated from their Buddhist and Hindu neighbours.

In director Ko Aung Htet Myet’s fiery documentary, the bespectacled duo that make up the band Angry Folks, Ko Kyaw Zin Linn and Ko Aung Thaung Oo, have realised that love is not everything – and neither are love songs. So, they start to write songs about the lives and rights of people at the grass roots, and perform them at strikes and protests.

In one of their songs, “Which Side Are You On”, which they play at a strike by factory workers in Yangon’s Hlaing Tharyar Township, the lyrics ask, “Hey onlooker, where you stand? Make a choice and tell me.” The film hints that bystanders – those who purport to be apolitical and neutral – can be just as bad as powerful figures who commit rights abuses. Kyaw Zin Linn and Aung Thaung Oo try to awaken political consciousness in such songs as “Fight for Your Rights”, which features these blistering lyrics:

“It doesn’t matter who you vote for, the result is the same. The real power is still in their hands after 60 years. It’s a disgusting game where they’re toying with life and blood. The proof is in the refugees of civil war that resumed in 2011. Instead of crowning the liars, let’s destroy the throne altogether. Let’s destroy the power.”

“Whenever I hear an ambulance siren, I will remember U Tun Myint,” director Ko Mann Pye Phyo Aung told me. A native of Lashio in northern Shan State, his film about Tun Myint and his volunteer ambulance crew won the Jade Award, the competition’s third prize.

Tun Myint, 57 was the former chairman of the Muslim Volunteer Association, which had been providing ambulance and emergency services in Lashio since 1972. After anti-Muslim riots in the area in 2013, the volunteer group changed its name to the Lashio Youth Humanitarian Association, to stress its religious neutrality in helping accident victims.

Whether it be a Bamar drowning in a waterfall or a Shan mangled in a car crash, the young Muslim volunteers led by Tun Myint are filmed rushing to provide help. Sometimes they recover from the jungle the decomposing bodies of drug addicts, whose ethnicity or religion cannot be determined.

In 2013, after rioters stole the group’s ambulances and set them on fire, the volunteers soon recovered from the loss and resumed their humanitarian work. “Helping people is also peace work. Even if he is my enemy, I will help him. He should live too. It is my duty,” Tun Myint says in the film.

On August 17, four months after he was filmed for the documentary, Tun Myint was driving to rescue civilians injured in armed conflict in rural Lashio Township. It was to be his last mission. While returning to Lashio, Tun Myint died from a shrapnel wound to the head after his ambulance met an improvised explosive device laid by an armed group.

At the Anti-Drug and Rehabilitation Camp in Pekon Township, southern Shan State, newly admitted drug users are confined for a few days in an outhouse. Here, a tank of water infused with medicinal herbs is supposed to help them endure the pain of going cold turkey. But besides these rigours, the camp resembles a benign retreat from the world.

The film, by director Ko Chit Moe Pio, opens with a legion of men – from teenagers to the middle-aged – in sleeveless jerseys, performing their morning physical exercises. On some jerseys is the slogan, “Returnee from Hell”, while others proclaim, “A New Lease of Life”.

This documentary provides a glimpse of the drug crisis that is shattering lives in Shan, which remains one of the world’s biggest sources of opium and methamphetamine. The camp was established in 2013 by the Kayan New Land Party, a militia representing the Kayan (Padaung) ethnic group that fought the government before a ceasefire in 1994 and was granted a small autonomous area. The camp, as portrayed in the film, is a beacon of hope for addicts from all religions and ethnic groups, including Muslims and Hindus.

Mountain Camp is, in my view, the most outstanding film in this year’s YFS productions. This portrayal of a diverse group of people living together in a disconnected, off-grid highland area is full of disarming moments, such as a man playing a flute alone or people of different ethnic groups singing around a bonfire. The whole film evokes a sense of peace.

TOP PHOTO: Still from the film Lashio Ambulance showing U Tun Myint, the rescue volunteer killed in August by a roadside bomb while on a mission to help conflict victims.