Ill-equipped hospitals brace for the worst

As the number of coronavirus cases gains pace in Myanmar, there are more questions than answers about the ability of the public health system to respond to a large outbreak.

“HOW MANY PPE (personal protective equipment) suits and ventilators are there in Myanmar and will they be enough?”

Dr Khin Khin Gyi, director of the Central Contagious Disease Prevention and Eradication Sub-Department of the Ministry of Health and Sports, did not like the question put to her by Frontier in a phone interview.

Instead of answering it, she responded with questions of her own. “How many ventilators do you think is enough? How would one measure how many is enough?” she said before adding, “Only six out of 100 people [with COVID-19] need ventilators.”

Evidence from abroad shows that Khin Khin Gyi is correct that only a small proportion of people infected by the coronavirus will need mechanical ventilators to enable them to breathe and improve their chances of surviving respiratory failure.

But are hospitals, clinics, medical professionals and other health workers prepared for a sharp rise in the number of confirmed cases (which currently stand at 14 with one death), and do they have the equipment and other resources they need to cope with an increase?

While government officials were not forthcoming to Frontier on the subject of ventilators, a presentation by global medical and travel security company International SOS on March 24 estimated that Myanmar had fewer than 200 of the machines, as well as only 29,832 trained physicians – a density of 6.1 per 10,000 of the population.

On the ground, Frontier found that hospitals in Yangon and elsewhere are already close to capacity and lack enough ventilators or intensive care beds in isolation wards to deal with even a moderate outbreak of the coronavirus.

Quarantining those at risk of infection is essential to help control the spread of the vrius and the number of quarantine spaces is being increased, with hotels playing a supporting role. However, if there is a shortage of medical personnel and equipment, quarantine facilities will not be able to help those already battling the virus. 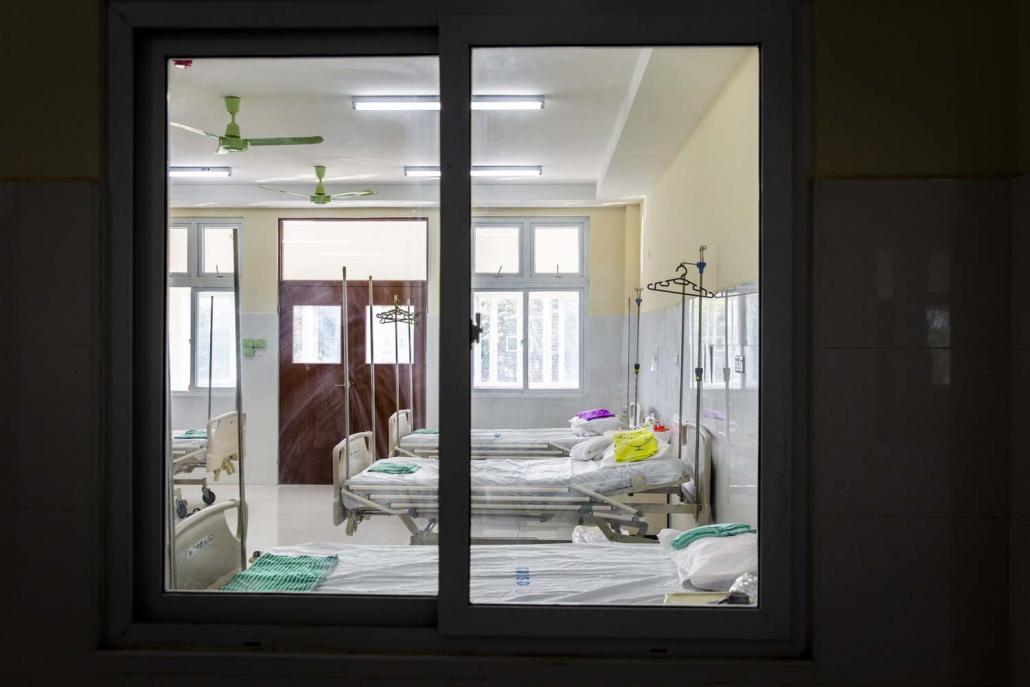 A quarantine room at the South Okkalapa Maternal and Child Hospital in Yangon. Seventeen people were under quarantine when Frontier visited on March 26. (Hkun Lat | Frontier)

One line of defence against the spread of the virus in Myanmar concerns those detected with respiratory ailments known as PUIs, or persons under investigation, who are required to spend 14 days in a hospital isolation ward at a government hospital.

Samples taken from them are tested for COVID-19 at the National Health Laboratory in Yangon, the only facility in Myanmar capable of testing for the virus, and patients who test positive are transferred to the commercial capital’s Waibargi infectious diseases hospital or treated in an isolation ward at another hospital. PUIs who test negative are transferred to a standard ward for their symptoms to be treated.

As of 10:30pm on March 29, Myanmar had 474 PUIs, of whom 10 had tested positive for the disease, with 63 results pending (four more PUIs were confirmed positive on the night of March 30).

A next line of defence is quarantine. All arrivals from abroad and anyone who has been in contact with a suspected case are required to be quarantined in a hospital, a state facility or at home for 14 days. Ministry of Health and Sports officials say anyone showing COVID-19 symptoms while under quarantine will be transferred to a hospital with an isolation ward.

An official said many buildings had been prepared for quarantine since the second week of March, before Myanmar’s first positive cases were announced.

Religious buildings such as monastic schools and mosques, AYA Bank training centres, boxing venues and various Ministry of Health and Sports buildings have been re-purposed as quarantine facilities. Government officials have also been collaborating with the Myanmar Hotelier Association to make hotel rooms available for quarantine.

“We have made many arrangements and have major plans, such as preparing hundreds of buildings for use as quarantine sites in the event of a worse-case situation,” said Dr Aung Tun, a public health expert who studied medicine at Boston in the United States and is a close adviser to Minister for Health and Sports Dr Myint Htwe.

The preparations would allow for up to 30,000 people to be placed under quarantine at various locations in Yangon, said a senior ministry official who asked not to be named, and who emphasised that the sites were for quarantine only and not for treating confirmed cases. 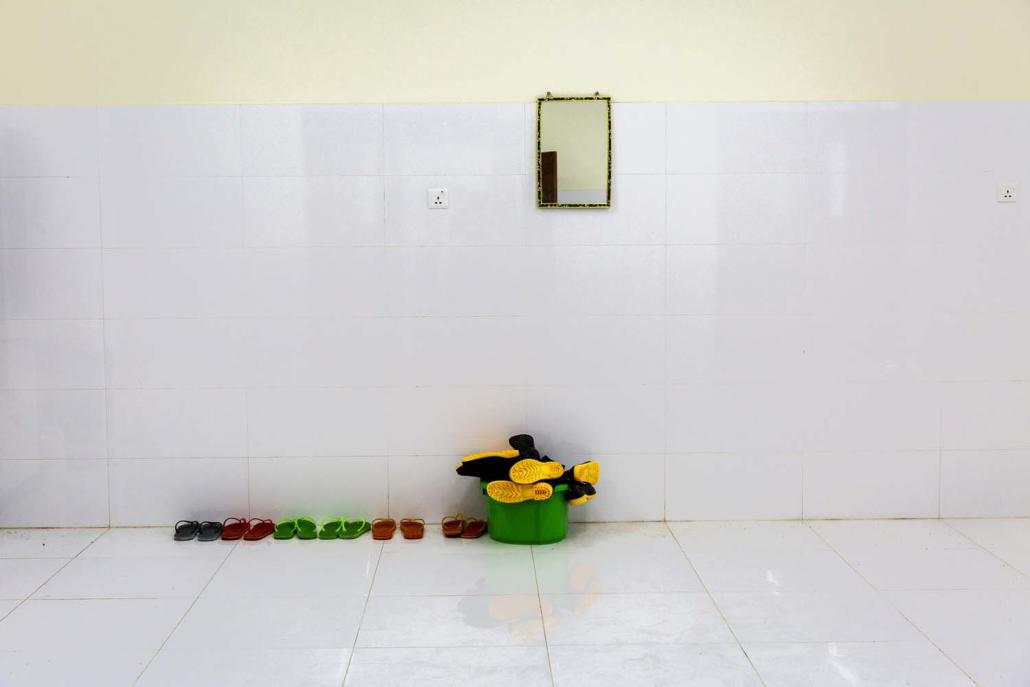 Boots and rubber slippers sit on the floor of a personal protective equipment (PPE) changing room at the South Okkalapa Maternal and Child Hospital in Yangon on March 26. (Hkun Lat | Frontier)

Although the authorities say they have enough facilities for quarantine, the isolation wards in many public hospitals need to be expanded to treat the expected increase in COVID-19 cases.

Yangon’s North Okkalapa Township Hospital, a government facility and a teaching hospital for medical students, has an isolation ward that can accommodate four patients and is equipped with four ventilators. It already has two PUIs in the isolation ward.

The head of the hospital, Dr Kyi Soe, says the isolation ward can be expanded to accommodate between 30 and 40 patients, but if that happened more equipment would be needed. However, Kyi Soe mentioned no concrete plans for expansion.

North Okkalapa Hospital, which is usually crowded, is near the University of Medicine 2 and because it is a teaching institution it is relatively well equipped.

The hospital has a total of 15 ventilators, which are for the exclusive use of each ward and cannot be transferred between them, including to the isolation ward.

“The hospital has other ventilators but we cannot borrow them. We cannot use a ventilator on other patients after using it on a suspected COVID patient,” said a doctor on duty at the isolation ward.

On March 24, a man who lives in Yangon’s Insein Township tested positive for the coronavirus at Insein Hospital and was transferred to Waibargi Hospital for treatment.

Insein Hospital, a government facility, has three ventilators, including one in its isolation ward, and 439 PPE suits. It can accommodate eight PUIs and there were seven at the hospital on March 26. Dr May San Cho, the head of the hospital, had no answer when Frontier asked her how the hospital would respond to a higher number of patient referrals.

Nonetheless, Insein Hospital seemed to be better prepared for an influx of coronavirus cases than other public hospitals. It has established a dedicated team of doctors and nurses for COVID-19 cases that will work around the clock. “We are fortunate that we have not yet been inundated with patients,” said a nurse on duty at the hospital, referring to its limited amount of equipment.

Most of the recent returnees from abroad who are undergoing hospital quarantine have been admitted to the Maternal and Child Hospital in Yangon’s South Okkalapa Township. There were 56 people under quarantine at the hospital on March 23 but when Frontier visited on March 26 it had only 17 patients because the rest were paying to be quarantined in hotels.

The four-storey building being used for quarantine at the Maternal and Child Hospital has free wifi and meals. However, the hospital has not prepared an isolation ward and it has no ventilators. The head of the hospital, Dr Win Maw Oo, insisted that preparations are rapidly being made to increase capacity but did not divulge any details. Though he said the hospital would like to inaugurate an isolation ward, they are waiting for direction from the health ministry. 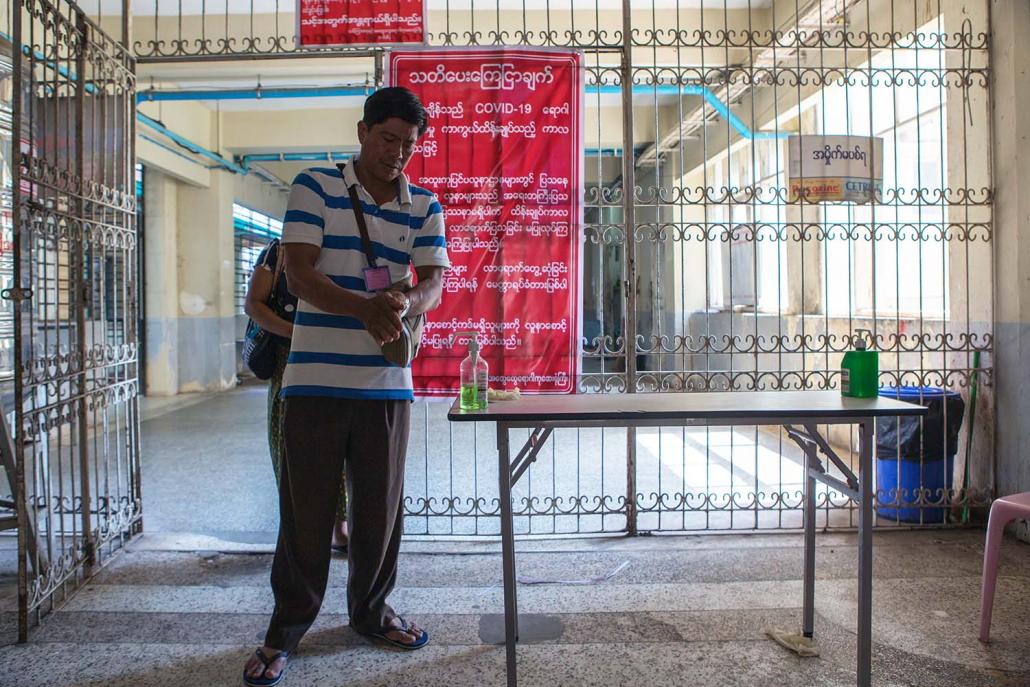 A visitor to Insein General Hospital sanitises his hands before entering the building on March 26. (Thuya Zaw | Frontier)

‘We should be prepared’

Frontier found that hospitals in other cities and towns with PUIs also lack enough space in isolation wards and ventilators to deal with a COVID-19 outbreak.

Pathein Hospital in Ayeyarwady Region, one of the most heavily populated regions in the country, to which large numbers of migrant workers have returned after losing their jobs, has about 220 PPE suits, a six-person isolation ward and three ventilators.

Dr Than Min Htut, the head of Pathein Hospital, said it had to be kept in mind that only a minority of COVID-19 patients with severe respiratory problems would need ventilators. “However, we can’t predict how big a COVID outbreak would be in Myanmar. We should be prepared as best we can.”

Than Min Htut said he was particularly concerned about the annual rains, which usually start in in late May, when conditions that make seasonal flu more common could help the spread of COVID-19.

A doctor who works in the isolation ward at the Taunggyi Women and Children’s Hospital in the Shan State capital told Frontier the hospital contained one ventilator and this was being used outside the ward.

“Why is the ministry not providing [more] ventilators to the hospitals?” the doctor said. “Is it because there isn’t enough money? Ventilators are essential when a patient has respiratory failure.”

However, most of the staff from different hospitals interviewed by Frontier believed they were prepared to relieve the milder symptoms of the disease. Kyi Soe at North Okkalapa Hospital believed there would be an increase in COVID-19 cases in the coming days and weeks but said, “We have reserve stocks of [the necessary] medicines.”

But the risk that the patient caseload could quickly become unmanageable remains grave.

A nurse at North Okkalapa hospital who asked not to be identified said she was worried about the prospect of a massive increase in the workload of health care personnel.

“We are the ones who will be exhausted,” she said. “This is only the beginning. I cannot image how we will cope.”