Identity politics and the Mong Wong

A last-minute decision by the previous government to recognise a Mandarin-speaking community as a Bamar group has generated controversy over one of the nation’s most sensitive topics.

ETHNICITY HAS long been a sensitive subject in Myanmar, but particularly so in recent years as nationalistic, religion-linked notions of what defines citizenship have risen, at times violently, to the fore.

Much discussion has touched on the controversy over the citizenship status of those who identify as “Rohingya”, and whom the National League for Democracy-backed government recently said it would refer to as the “Muslim community in Rakhine State”.

Ethnicity is also at the core of many of the nation’s armed conflicts, particularly as so many different groups maintain their own armed forces. 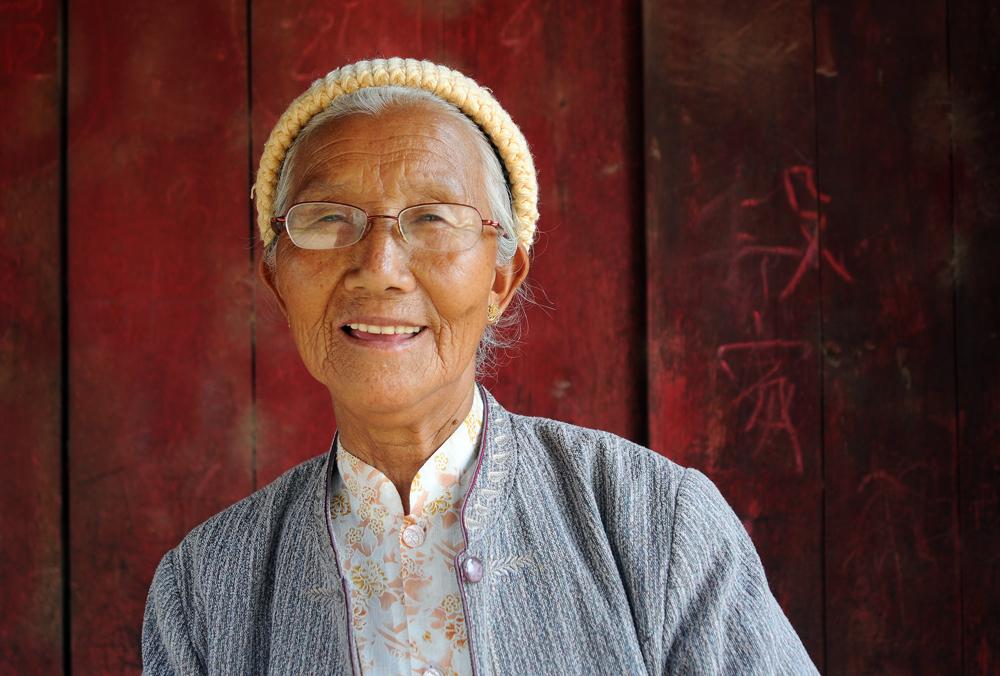 Eyebrows rose in March when one of the last acts of the outgoing military-backed government was to grant a formal change of identity to an obscure, almost unknown group commonly known as the Mong Wong, who live in northern Shan State. Under the decision, members of the group are now recognised on official documentation as the “Mong Wong (Bamar)” rather than “Mong Wong (Chinese)”.

Media reports initially said the Mong Wong had also been added to the list of officially recognised ethnic groups within Myanmar’s borders, taking the total to 136. This only heightened the controversy, but the Ministry of Labour, Immigration and Population has since clarified that the Mong Wong have not been added to the list. This means they are not considered indigenous, which would entitle them to full citizenship rather than naturalised or associate citizenship. 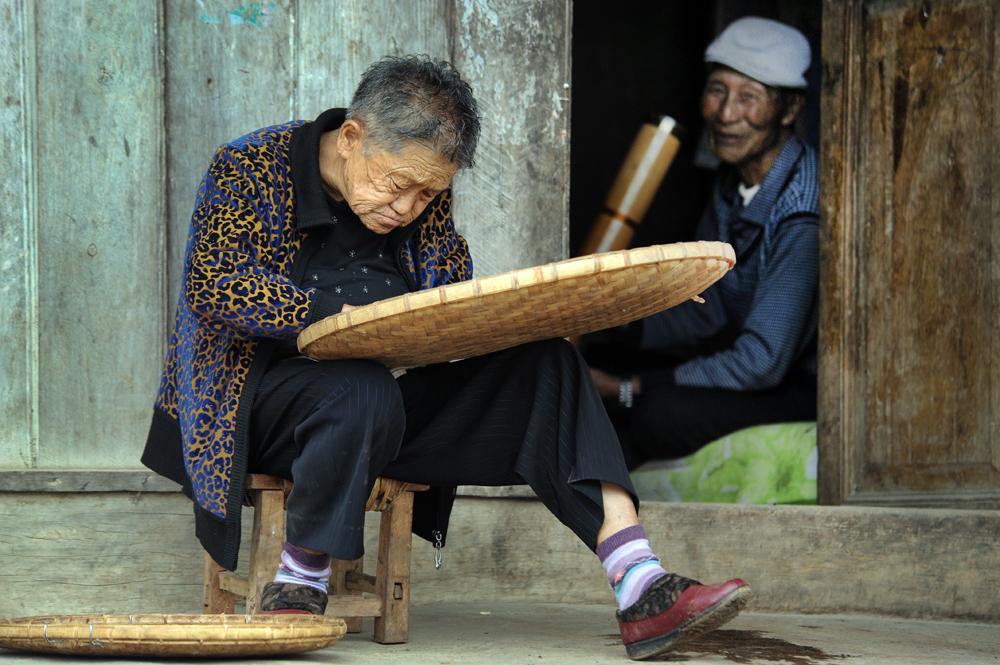 But the addition of “Bamar” to their official name would appear to give the Mong Wong greater legitimacy than other non-recognised groups. It is also surprising, given they are clearly of Chinese descent.

But the history of the Mong Wong people in Myanmar has been shrouded in mystery and controversy. They are estimated to number up to 60,000 and are concentrated in and around the town of Tarmoenye, in Kutkai Township – a fiercely contested region not far from the border with China that is home to many pro- and anti-government armed groups. 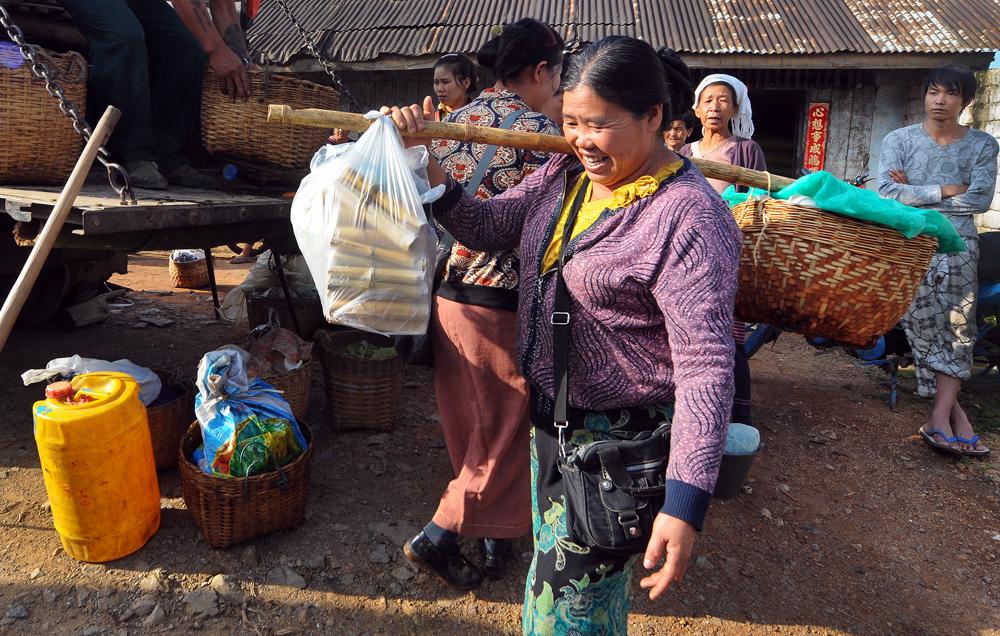 A Shan woman brings her produce to the popular Tarmoenye Sunday Market. Although a predominantly Mong Wong community, the Tarmoenye area is also home to a number of Kachin, Palaung and Shan people. (Steve Tickner / Frontier)

It is also a region notorious for links to lucrative opium cultivation and the broader narcotics trade, although greater efforts have been made in recent years to encourage farmers to cultivate other crops such as tea and vegetables. For former opium farmers, however, the change represents a considerable loss of income.

The decision to recognise the Mong Wong with the “Bamar” designation was reportedly promised during a visit to Tarmoenye in 1998 by then-junta chief Senior General Than Shwe. As a junior officer based in the region, Than Shwe had developed a close relationship with U Myint Lwin, the head of the Tarmoenye militia. Myint Lwin would later become a Union Solidarity and Development Party MP in the Shan State assembly. 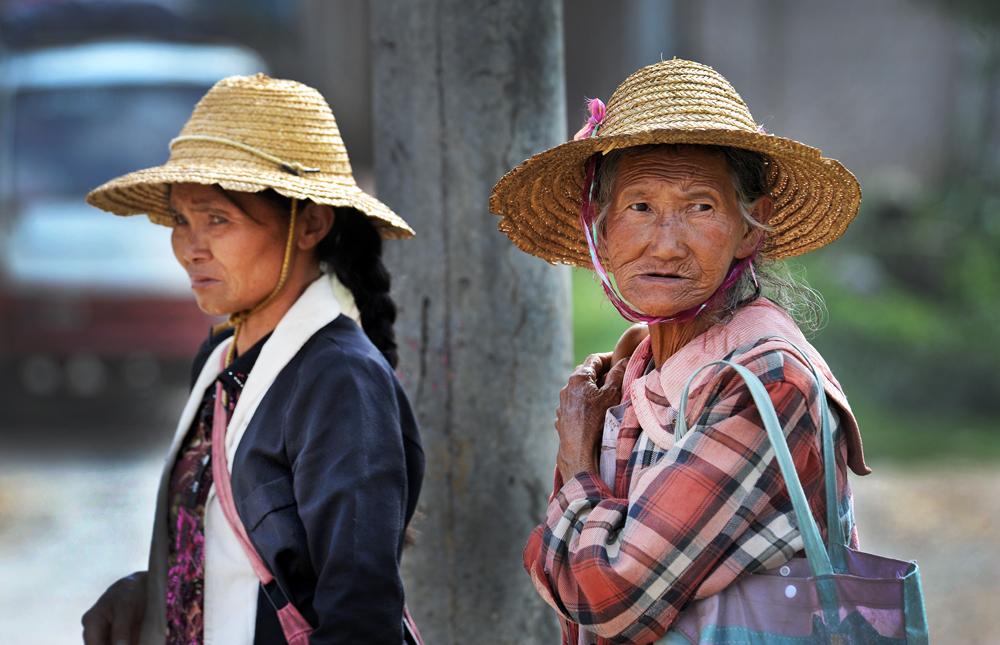 U Thein Swe, the Minister for Labour, Immigration and Population, who was expelled from the USDP earlier this year for accepting a cabinet position in the NLD government, has been quoted as saying the decision to recognise the Mong Wong as a Bamar group was a reward for the support its militia have given the Tatmadaw in campaigns against other armed ethnic groups in the region.

Asked about the Tarmoenye militia, reportedly about 100-strong, residents said they felt safer because of its presence. The militia is also credited with providing the area with previously non-existent electricity and phone connections, and other basic services.

The dress and customs of the Mong Wong show strong Chinese influence and most seem to speak only Mandarin, though some also speak Burmese and Shan. The population of Tarmoenye and its surrounds also includes smaller numbers of Shan, Kachin and Palaung. 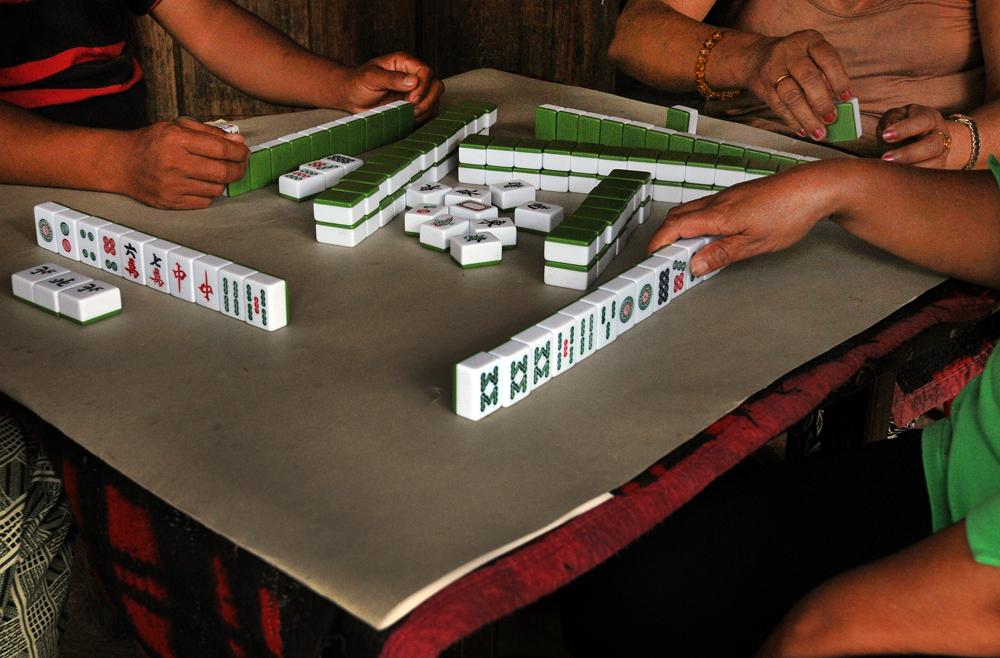 The administration of Tarmoenye, the area’s administrative and commercial hub, from immigration to the police, is firmly in the hands of ethnic Bamar public servants, all of whom declined to be interviewed about local affairs.

The central market area has a distinctive Chinese atmosphere, as seen in the architecture of the older buildings and the colourful signs in red characters adorning homes and businesses.

Traditional Mong Wong attire is blue and black. It was once common for the women to wear full-length, high-collared and buttoned dresses, though this tradition has faded. 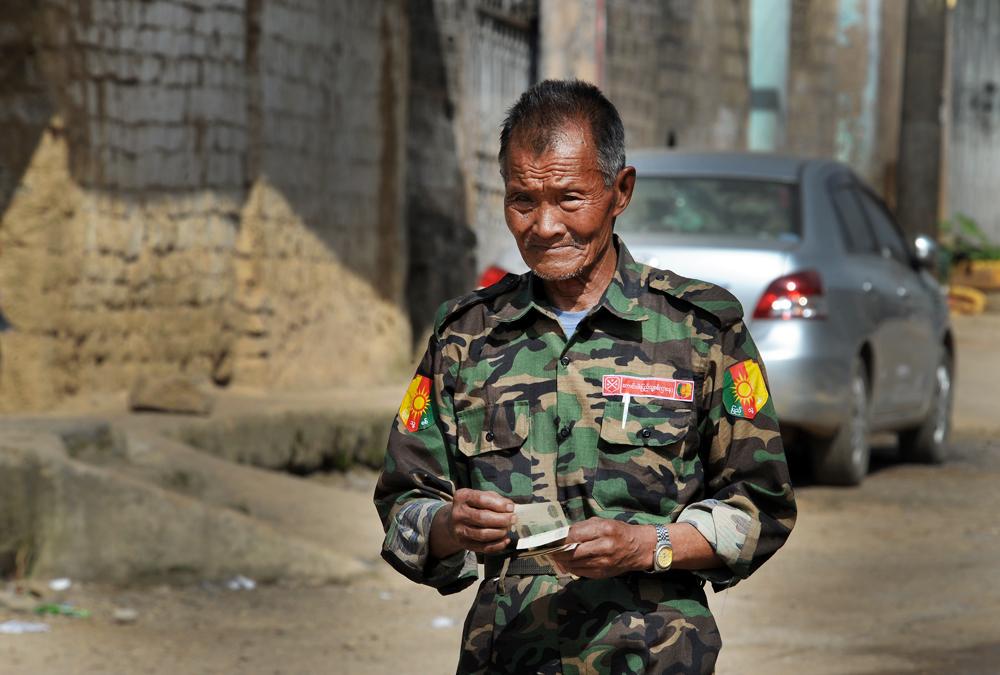 A member of the Tarmoenye militia walks through the town. (Steve Tickner / Frontier)

Mong Wong oral histories challenge the belief that many of the ethnic Chinese in northern Shan are descended from members of China’s nationalist Kuomintang forces who fled into Myanmar after their defeat by the communists in 1949.

Some older Tarmoenye residents say the group migrated to the area from across the border in China’s Yunnan Province about 200 years ago, but it’s not the only theory.

On the question of whether the group is truly Burman, Daw Kin Ling Kai, 42, a Tarmoenye shop owner and mother of six, recited an oral history that reached back more than four centuries. 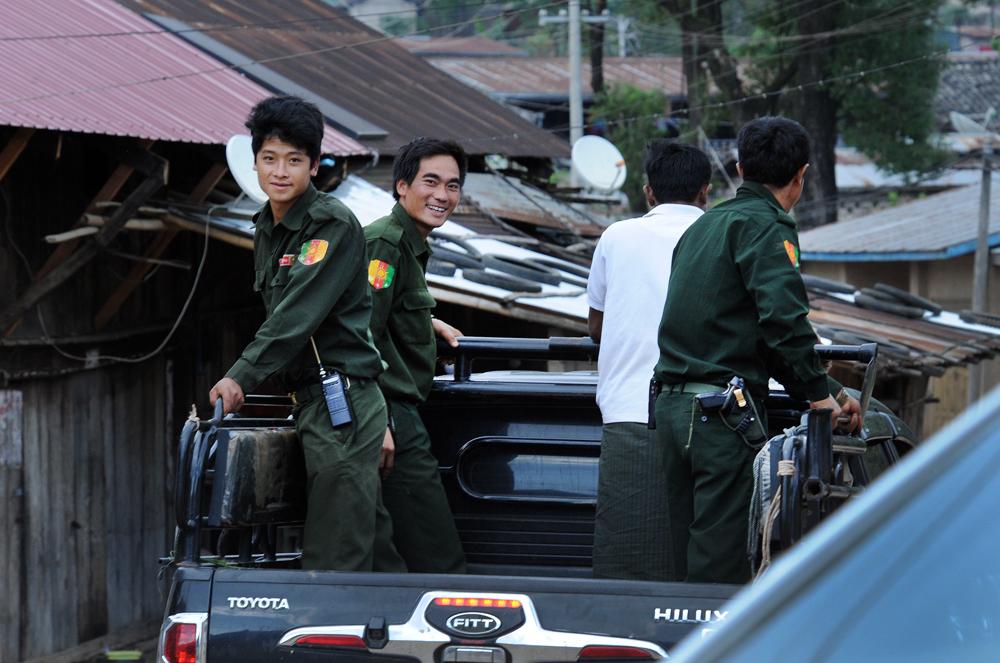 Members of the Tarmoenye militia travel through town on the back of a truck. (Steve Tickner / Frontier)

Kin Ling Kai said that, according to her understanding, in the mid-16th century, during one of the most turbulent periods in Burmese-Thai relations, a Burmese king, possibly Bayintnaung, took his formidable army across the mountains to seize control of northern Thailand.

Along the way the king conscripted ethnic Chinese for his army to use as porters or other labour, recounted Kin Ling Kai.

After the Burmese king was defeated in his first battle with the Thais, one of the ethnic Chinese stepped forward with a suggestion. 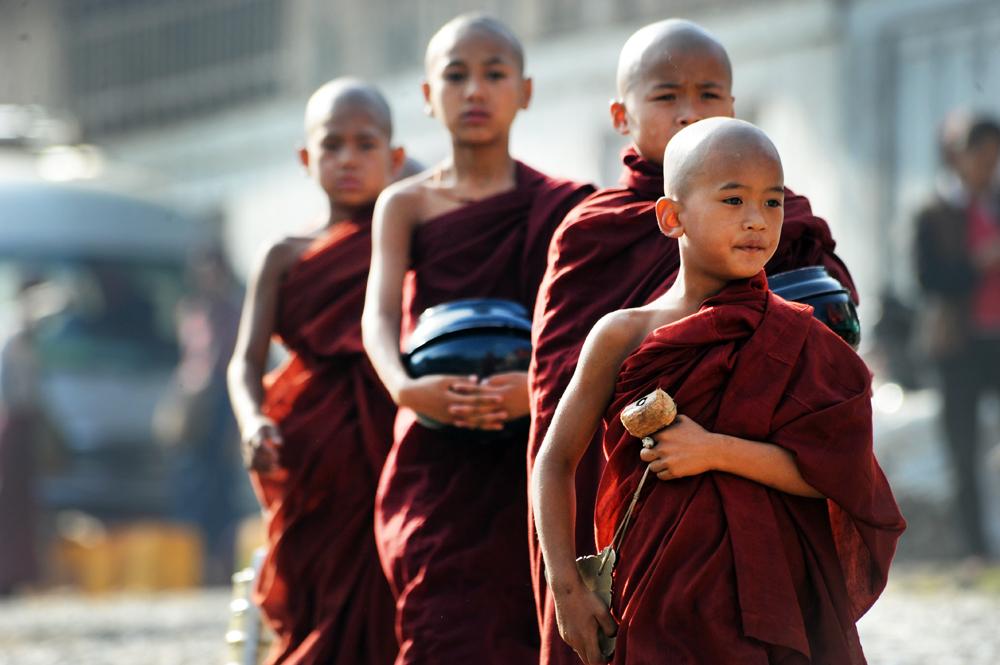 His name was Twang Wu and he was well versed in Chinese military strategy. The advice he gave the king resulted in a victory for the Burmese army.

The king was so pleased with Twang Wu that he offered any reward of his asking.

Twang Wu said his wish was to be able to rule his own people on their own land. Asked by the king where he wanted his people to live, Twang Wu pointed on a map to an area in what is now northern Shan State.

Twang Wu chose well. The region is lush and fertile, ideally suited for agriculture, and the climate is cool and temperate. The Mong Wong have lived there ever since.