KUALA LUMPUR — More than 260 Rohingya arrived by boat in Malaysia on Monday, officials said, despite authorities’ efforts to fight the coronavirus by stopping entry of the Muslim minority.

Fears have been growing in recent months that large numbers of the migrants from mostly Buddhist Myanmar are trapped at sea as countries that traditionally allowed them in turn their boats away.

Many previously headed by sea to Malaysia, but authorities have strengthened maritime patrols to prevent illegal entry by foreigners over fears they could be carrying the virus.

Rohingya usually travel either from Myanmar or Bangladesh, where about one million live in squalid refugee camps. Most of those fled a 2017 military crackdown in Myanmar and thousands have tried to reach other more affluent Asian nations even if it means risky voyages on crowded, rickety boats.

On Monday a coastguard vessel spotted a suspected migrant boat off the northwest island of Langkawi, and was set to push it out to international waters, authorities said.

But as the coastguards approached, 53 Rohingya jumped into the sea and were detained.

On inspecting the boat, authorities found another 216 Rohingya and the body of a dead woman, according to a statement from a task force overseeing maritime patrols.

“Investigations also revealed the boat was intentionally damaged and… could not be repaired,” the statement said, adding this “resulted in the push-back effort being halted”.

Food and water were provided to the migrants and the boat was taken to Langkawi, where all 269 were detained, it said.

Authorities did not say where the vessel started its journey, or how long it had been at sea.

In April, Malaysia intercepted and turned back a boat carrying about 200 Rohingya, sparking calls from rights groups for the government to soften its stance.

Malaysia says it has turned back 22 boats trying to enter the country illegally since the start of May.

The Southeast Asian nation has long been a favourite destination for Rohingya as it is Muslim-majority and already home to a large number of them.

In recent months, hundreds of Rohingya have been rescued off Bangladesh after being stranded for long periods on boats.

In April, two survivors told AFP that 60 Rohingya died on a boat crammed with hundreds of people stranded in the Bay of Bengal, after Malaysia and Thailand both denied it entry. 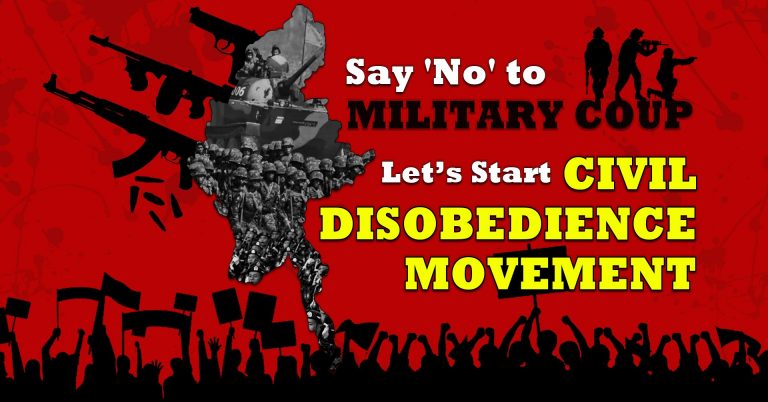 Staff from dozens of state hospitals and medical institutes have pledged to stop working from tomorrow in protest against yesterday’s coup, in what could prove the first major test for the new military regime.
BY Frontier