A senior Htoo Group official says damage to wiring at the Kandawgyi Palace Hotel was the reason why some fire alarms failed to activate during a blaze on October 19 in which two people died.

HTOO GROUP has acknowledged that some fire alarms at the Kandawgyi Palace Hotel failed to activate in October when a deadly fire ripped through the teak structure.

In an exclusive interview with Frontier, U Myat Min Zin, the deputy managing director of Htoo’s Hotel Business Unit, said the alarms failed to go off because the fire had damaged the electrical wiring.

The comments suggest that the fire alarm system had no battery backup.

“Some alarms didn’t produce any sound because the fire … burned the water pipes and electric wires,” Myat Min Zin said. “Because the electricity was cut out, the alarms were only able to produce sound for a while.”

Myat Min Zin said the hotel had a fire emergency plan, under which fire prevention training was undertaken every month and fire drills every three months.

But Myat Min Zin’s comments contradict those made by hotel officials in the hours after the October 19 inferno, in which two foreign guests died, and a guest and a fireman were injured.

At a press conference on the morning of the fire, Mr Raymond Bragg, the chief executive officer of Htoo Hospitality, was quoted as saying that the hotel “has all fire protection systems and all systems work well”.

Another Htoo official, U Htay Lwin, insisted that the fire alarm had not failed. “The fire alarm was working normally,” he said.

No alarm, no sprinklers

Dozens of guests who were staying at the hotel on the night of the fire are in no doubt that the alarm system was not working.

In an open letter to the media, 23 guests said they were “surprised” that hotel management had insisted everything was in working order.

“We did not hear any fire alarms, we did not see any fire extinguishers working.  There was only the shouting of staff as they banged on the bedroom doors to wake us up,” they wrote.

“Some guests got a phone call from reception. Why would the staff need to shout – or make telephone calls – if the alarms had sounded? Some guests tried to set off the fire alarms on floors one to three, but they did not work.”

One of the signatories to the letter, Mr Julian Hussey, said staff also seemed to be poorly trained. “There appeared to be no evacuation procedure or known muster assembly point and the hotel staff seemed to be totally unaware of the exit routes to safe areas,” he told Frontier last week. “It was the hotel guests who were leading the groups away from the fire.” 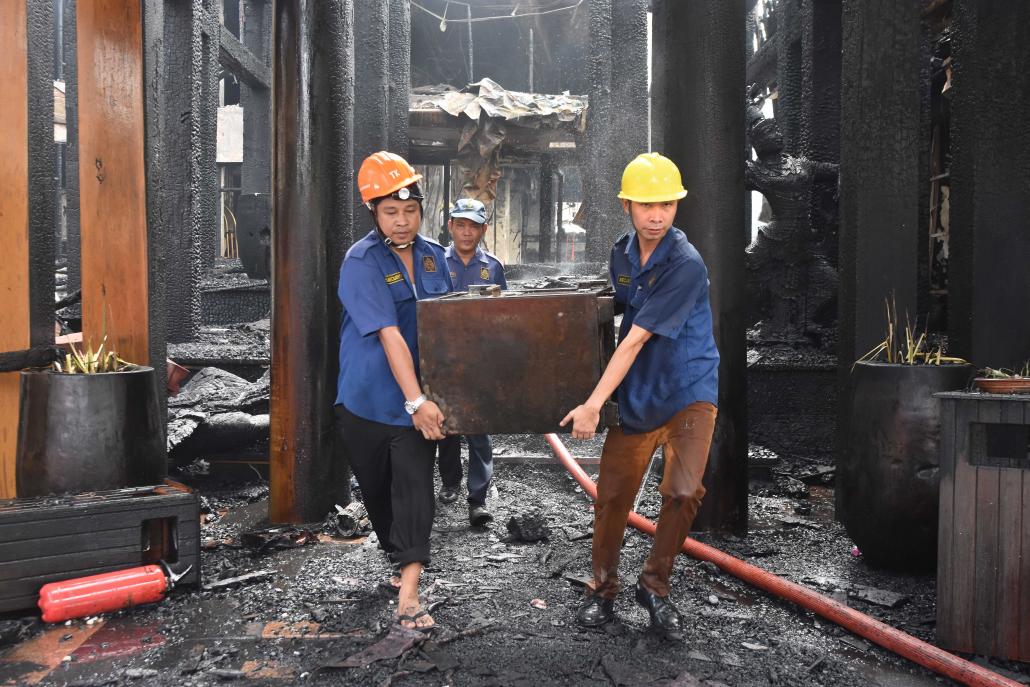 Security staff remove a safe from the ruins of the Kandawgyi Palace Hotel on the morning of October 19. (Steve Tickner | Frontier)

After the fire, most guests assembled outside the Yangon zoo and watched as the blaze gutted the hotel.

They waited for about two hours before being transferred to other accommodation. During that time, they discussed what had happened. In the letter, the 23 guests said that all of those who were standing outside the zoo that morning “shared the same observations of our experience”.

Frontier separately interviewed two other guests on the morning of the fire and both recounted a similar experience: no working alarm or sprinkler system.

In the letter, the guests urged the authorities to “undertake a transparent investigation to establish the full and accurate facts about this fire and to ensure that such a terrible event does not happen again in this country”.

The Ministry of Hotels and Tourism’s 2011 licensing guidelines for hotels stipulate only that they must “arrange fire preventive planning in accordance with stipulations of relevant departments”, “rehearse trainings for fire security services” and have an emergency exit if the building is over three storeys.

A Fire Services Department investigation into the blaze has been completed but not publicly released.

Although the building is in Mingalar Taung Nyunt Township, the investigation was led by the Tarmwe Township Fire Services Department. Both stations declined to comment when contacted by Frontier.

Representatives from the Police Force, General Administration Department, and immigration and tourism ministries were also involved in the investigation.

Shortly after it was completed, the head of the Yangon Region Fire Services Department, U Kyi Win, was transferred to the fire brigade training school at Zee Bin Gyi in Pyin Oo Lwin, Mandalay Region. He could not be reached for comment.

His replacement, U Myo Win, declined to comment because he was not involved in the investigation and had not had a chance to read the report. He directed questions to U Ko Ko Gyi, the head of the department’s Eastern District unit, who could not be reached for comment.

Mingalar Taung Nyunt police who are handling the case said they had received only a basic summary of the investigation, which they showed to Frontier. The document was similar to a report that police file after a minor fire.

The information contained in the summary is basic, stating that the estimated damage from the fire was K37 billion (about US$27.5 million) and the cause was an electrical fault.

Frontier understands that the Fire Services Department told one foreign embassy that it had interviewed guests staying at the hotel at the time of the fire, who reported that there was no fire alarm or sprinkler system, and that the instructions for what to do in the event of a fire were not clear.

Meanwhile, hotel manager U Thiha, 41, who was arrested by the police the day after the fire, remains in custody and is facing charges of negligence and manslaughter.

State-run Myanma Insurance has confirmed that it already paid out K692 million to Htoo Group for the loss of the hotel building and partial loss of an adjoining club.

The Myanmar Times reported on November 19 that Htoo Group held a separate fire insurance policy worth an additional K230 million. Frontier could not confirm this with Htoo Group. If correct, this suggests the fire has left the company about K36 billion out of pocket.

Many guests escaped the fire with nothing more than the clothes they were wearing. Htoo Group transferred them to other hotels around the city and handed each guest an envelope containing K300,000, which the company described as “petty cash”.

At the press conference on November 19, Htoo representatives said the company would cover guests’ losses.

Hussey, who is from Swaziland and was visiting Myanmar on his honeymoon, told Frontier that the company had failed to follow through on that promise. Htoo’s chief financial officer later told guests that they should make claims through their personal travel insurers rather than the hotel’s insurer, Hussey said.

In some cases, guests have been charged for their hotel room on the night of the fire, he said.

“Guests have suffered considerable disruption to their business trips or holidays, as well as have experienced significant trauma from the fire incident itself,” Hussey said.

“Guests feel additional compensation should be made available from the Htoo Group, particularly in the light of their apparent gross negligence towards providing their hotel guests with adequate and functional fire safety alarms and firefighting equipment.”

“Guests were provided with clothes and pocket money,” he said. “A list of articles that were lost or damaged was made and we are working to access the insurance money.”

TOP PHOTO: A firefighter battles the blaze at the Kandawgyi Palace Hotel in Yangon early on October 19. (AFP) 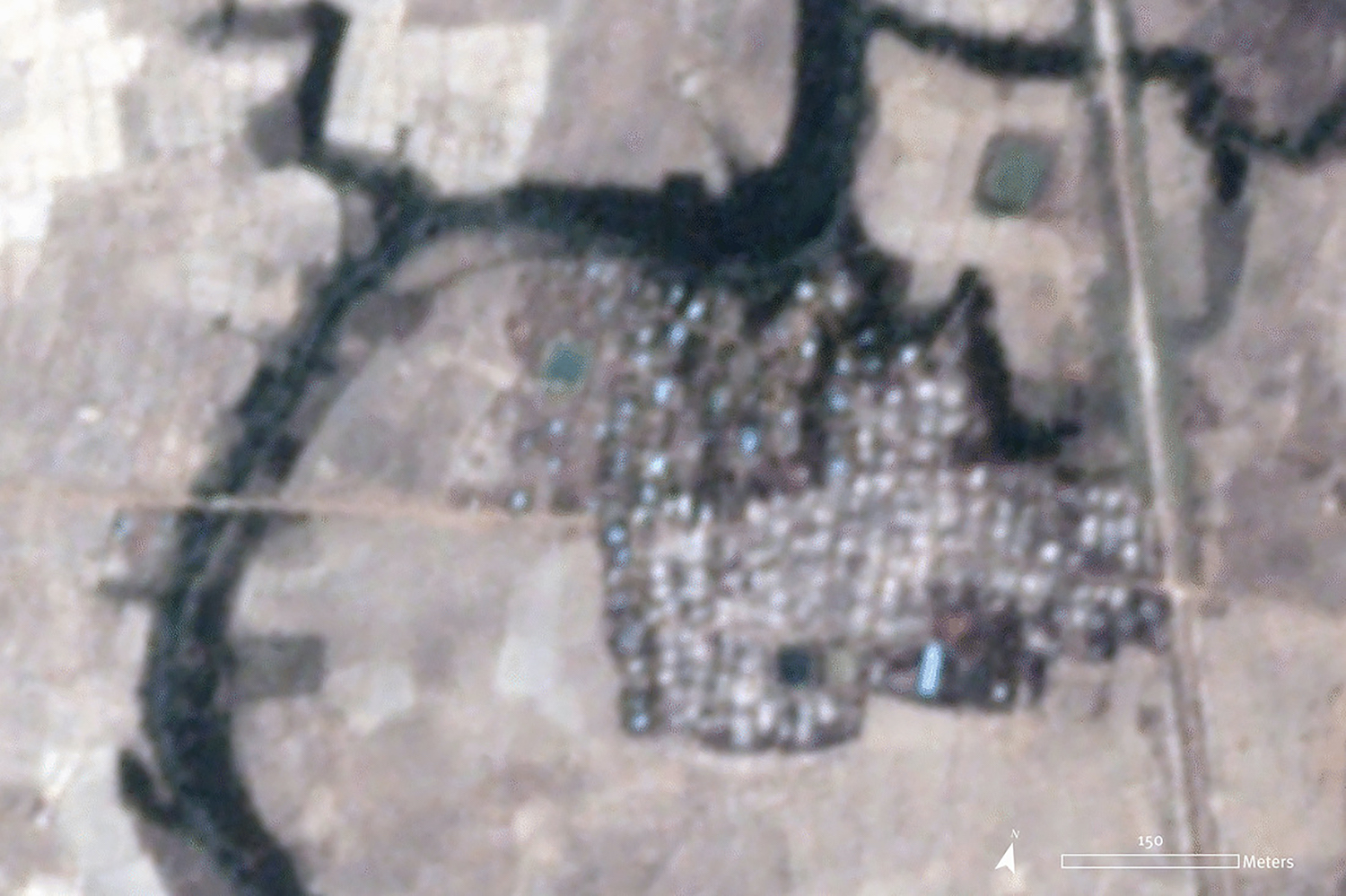