How to win likes and influence people

Four years ago, when she was working in the fashion industry in Toronto, Canada, considering returning to Myanmar and posting on Facebook to drum up a little name recognition, that number would have caught her completely off guard.

“I didn’t expect that much,” Win Min Than told Frontier. “My initial thoughts were, ‘OK, if someone knows me and I get employment, then I can shut this down.’ “

But now Facebook is Win Min Than’s form of employment. Her beauty and lifestyle tips have made her page, “Yangon In My Heart”, one of Myanmar’s top “social influencers” or ­– as they are known to the marketing teams that pay top dollar to feature their brands in her videos, selfies and emoji-laden notes – “key opinion leaders”. 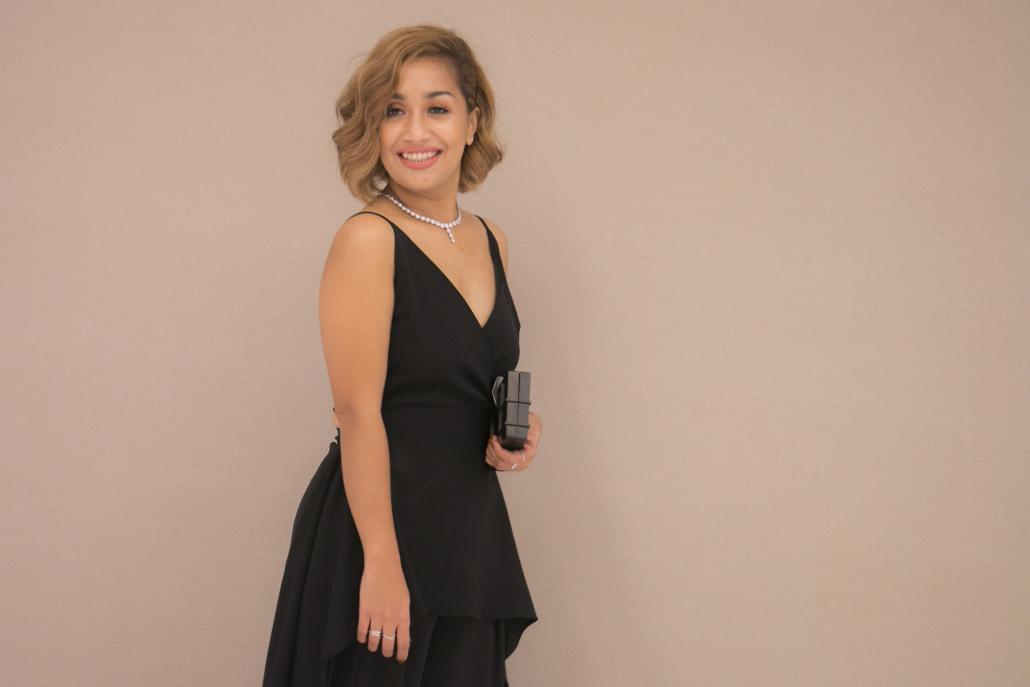 When she set up the Yangon In My Heart Facebook page after returning from Canada four years ago, Win Min Than never expected it to become a full-time career. She now has close to 400,000 followers. (Nyein Su Wai Kyaw Soe | Frontier)

Traditionally, Myanmar’s social influencers have been actors, pop singers or other mainstream celebrities, but in recent years the country has gained a new generation of stars who have racked up hundreds of thousands of followers more or less for doing their hobby.

Topics for the influencers can include cooking, parenting, prank videos or even the afternoon traffic.

Many influencers learn to harness their influence for profit or to support social causes. Pay-rates are on the rise as marketing agencies and corporate sponsors jockey for the hottest names on Facebook.

Win Min Than’s posts are natural and conversational, often set in her apartment, car or at a red carpet event, and always feature the products of her latest sponsor.

A new kind of star

The Facebook celebrity phenomenon in the country is still in its infancy, said Ma Thandar Hlaing, who was an actor and model in Myanmar before moving to Australia in the early 2000s.

Before her return in 2014, she began posting about life in general – health, food, her pregnancy, divorce and then new fiancé, and anything else she found interesting. 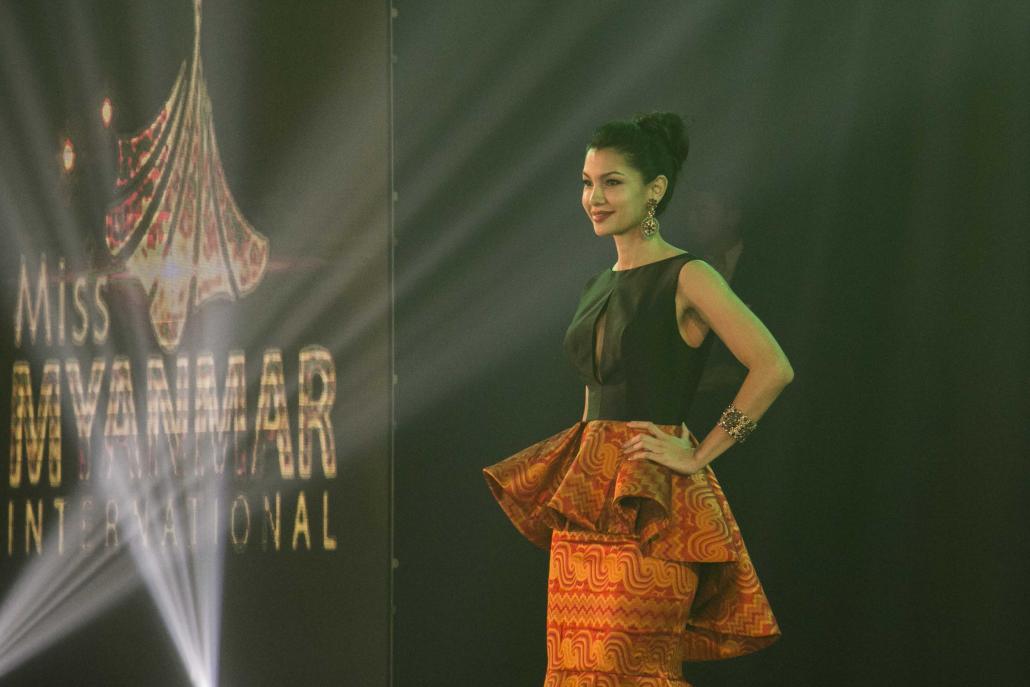 Thandar Hlaing has established herself as one of the country’s leading Facebook influencers since returning from Australia in 2014. (Nyein Su Wai Kyaw Soe | Frontier)

Thandar Hlaing has resumed life as a high-profile model, fashionista and TV personality (in addition to running her new fitness centre “T’s Workshop” in Yangon) but she said it was her Facebook followers, who now number more than 400,000, that put her back on the red carpet.

Thandar Hlaing studies these fans closely. She said the majority are women with relatively high education and spending power, and seventy-one percent of them are aged between 23 and 46.

At first, photos fetched the most buzz on her page, but eventually her audience began to respond better to in-depth text posts.

“I’m trying to wean [fans] off reading too much, because I don’t want to write three or four hours. It isn’t a good time investment.”

“Whatever item I promote, 70 or 80 percent of people I reach will go out and buy it or support it,” she said.

Those percentages are a very rough estimate; the exact extent to which social influencers affect the behaviour of their fans is impossible to measure, said Mr Bryan Lee, Myanmar brand director of OPPO Mobile.

Still, in terms of audience impact, key opinion leaders (or “KOLs” as Lee refers to them) do offer a much bigger bang for their promotional buck.

“The important thing is how can we create interesting content for followers online,” Lee said.

Whereas traditional advertisements are one-sided, when OPPO promotes a Facebook post “we are working by communicating with our target”, Lee explained.

But using Facebook breakouts to carry a brand has its own challenges.

For starters, promoting influencers requires a large amount of trust. A KOL can’t merely posted pre-prepared content; fans would likely notice and treat the post like any other ad.

On the other hand, leaving content to the KOL means there is no guarantee that the post will stay on message. For example, an influencer might post a photo of themselves using an OPPO phone, but make no mention of it in the text post.

“It’s kind of a balance. You need to consider their side and our side,” Lee said. 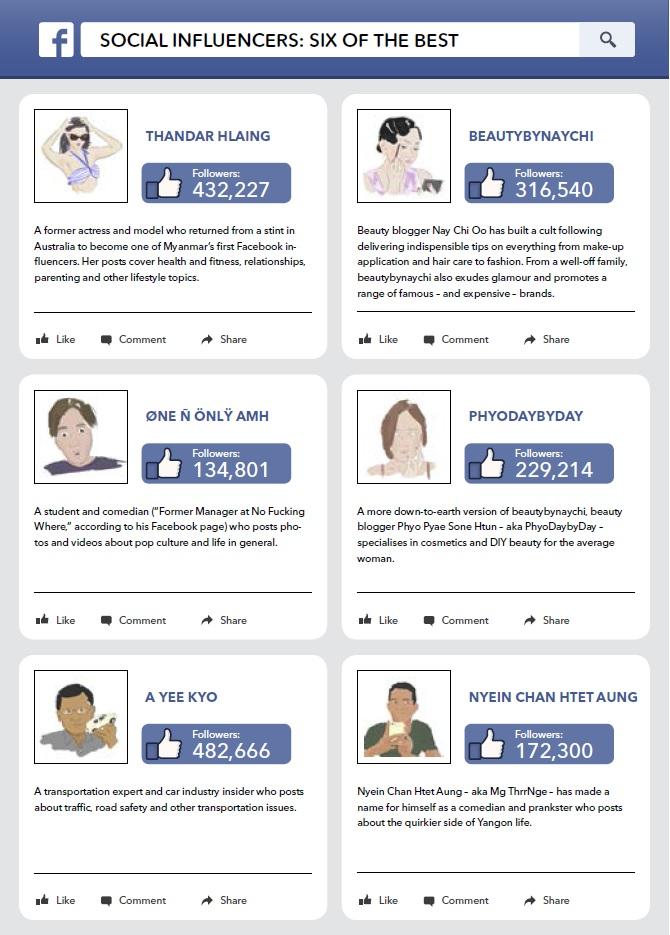 Comedian Øne Ñ Önlÿ Amh (the “Amh” stands for his real name, Aye Min Hein) doesn’t make huge profits from his sketches and parodies; “Just enough for a gift for my girlfriend, something like that,” he said.

But he said he feels “guilty” when he does sponsored content. Even when he knows he isn’t selling out, his fans might think he is.

He described his first paid video: “I don’t like that video. They gave me a script because it had to be in their advertisement plan,” Øne Ñ Önlÿ Amh said. “Now nobody gives me scripts. I do my own ideas.” 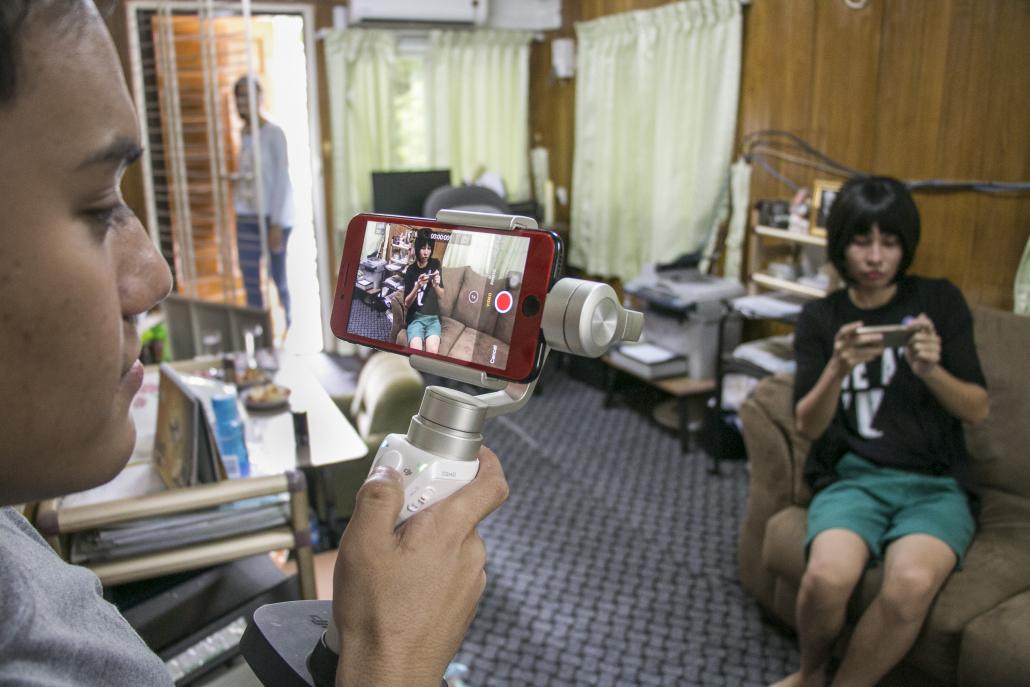 Perhaps more difficult than working with independent influencers is knowing exactly how influential they are to begin with.

Measuring social media success is a delicate art, Lee said. It isn’t enough to track likes and comment numbers; it is important that people are actually talking about the OPPO product.

“You need to check them really carefully. You cannot only check the picture they posted for you; you may need to check the other activities they do online. Some KOLs may post too many promotional things, which hurts their [overall] impact,” Lee said.

Despite these challenges, backing a Facebook celebrity is a great investment, said Mr Christopher Schikler, managing director for the Piyawasa marketing firm, which works with Thandar Hlaing.

However, the fame of Myanmar’s Facebook stars is still relatively untapped.

“A lot of [influencers] are monetising. But a lot of people on Facebook with big followings haven’t figured out a way to make money off of it,” Schikler said. “In every other market, you can post on YouTube and monetise through advertisements, but no one [in Myanmar] is on YouTube … It’s all on Facebook.” 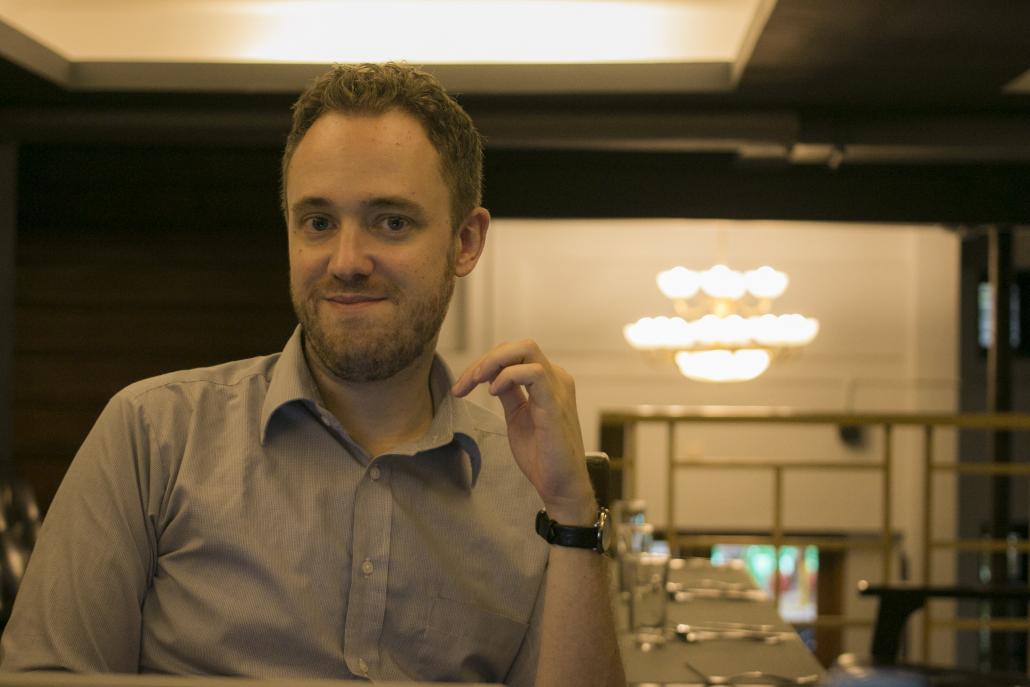 Unlike on YouTube, Facebook users cannot choose to attach paid ads to their submitted content, which means Myanmar’s influencers must learn to promote themselves, either on their own or with an agency.

Schikler added that his agency also tries to draw attention to social issues, and said they try to connect influencers with non-government organisations or social justice organisations to raise money or raise awareness.

But the philanthropic element has yet to be realised to its full potential, he said.

Thandar Hlaing raises awareness for the Start With Me road safety campaign and the MyME mobile education project, as well as environmental issues. She said that even though some influencers do not seem particularly impassioned by these causes, it is becoming more expected to use one’s fame for positive change.

“The social influencers are starting to realise that it is what they must do,” she said.

Win Min Than meticulously curates each post, and has begun working with professional film production crews to ensure that her videos are of an international quality. Yet she worries her fans can’t really tell the difference.

Short, low-quality photos and videos from a computer desk or the back of a taxi usually pull in more or less the same sponsorship fees and the same audience response as her carefully curated content, Win Min Than said.

“I show my skills, but the audience doesn’t know. They don’t understand.”

Bryan Lee argued that Myanmar’s shortcomings aren’t only in quality, but variety and creativity.

“Here, with most brands, they only ask KOLs to take photos,” Lee said. “But in China there are more interactive ways to work with KOLs. For example, you can turn social media campaigns into in-person events, tours and radio interviews.” 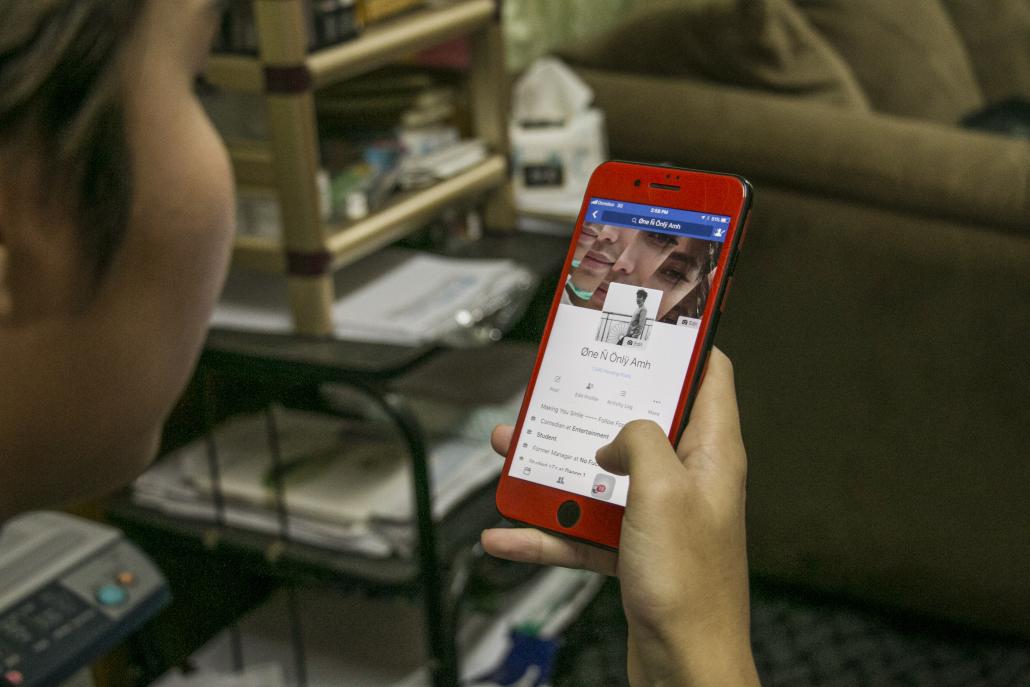 “We are looking forward to the development of mobile internet in Myanmar because it’s happening very fast. All those things that happened in China and Thailand are happening again [in Myanmar],” he said.

In the meantime, Win Min Than will not settle for mediocrity. 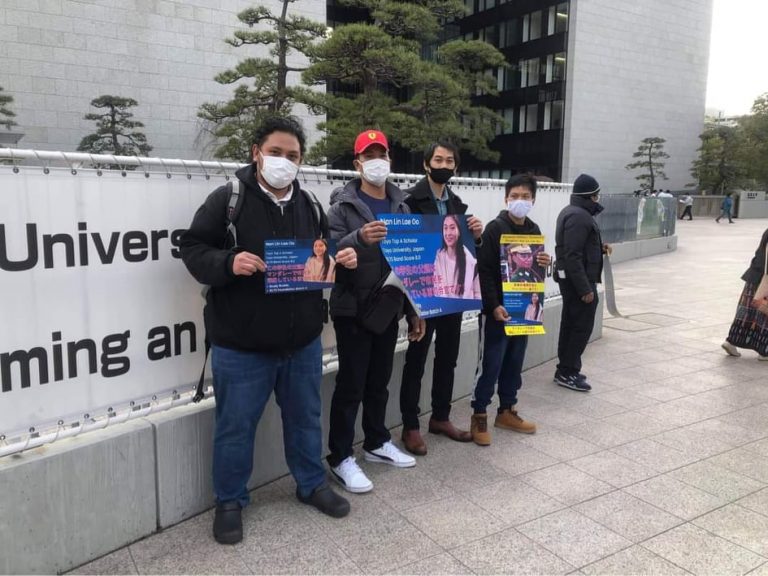 Many see a growing online movement to ostracise the families of Tatmadaw generals as retribution for the decades of social exclusion previous juntas have foisted on the families of dissidents.
BY Sithu Aung Myint