Arbitrary treatment from traffic police has inspired a campaign by a community group to have the motorbike ban in Yangon lifted, a move that has the support of some MPs.

There was no doubt that the policeman coveted the Thai-made Honda, Win Kyaw Maung told Frontier in a North Dagon teashop on July 10.

“He even shouted, ‘Wow! It’s a lovely Yodaya bike’,” he recalled. Thailand is often referred to as “Yodaya” in Myanmar.

“Fortunately, the bike was licensed; if it had not been he certainly would have impounded it,” Win Kyaw Maung said, adding that a friend with a useful connection to traffic police in the area had helped him to reclaim the vehicle from the police station, where it was being temporarily held, after paying a fine.

In 2003, motorbikes were banned in the 31 out of 33 townships in the Yangon municipal area, excepting Dala and Seikgyi Kanaungto, which are across the river from the rest of the city. But enforcement has always been more noticeable in inner city areas than on the outskirts.

In sharp contrast to cities such as Mandalay – whose streets are largely filled with motorbikes, similar to most other Southeast Asian cities – most people commuting to work in central Yangon rely on overcrowded buses, cars being unaffordable for them. Meanwhile, many of those living and working on the city outskirts, which are often poorly served by bus routes, commute by motorbike and risk occasional penalties from police officers in the process.

The traffic police sometimes launch crackdowns, usually in response to reports of crimes being committed by motorbike gangs. During the crackdowns police will impound motorbikes if, like most bikes in Yangon, they are also found to be unlicensed, and will generally fine the owners of licensed ones.

Daw Nilar Kyaw, regional minister of electricity, industry, transport and communications, foreshadowed the latest crackdown in comments made on July 12.

The crackdown on motorbikes defying the 2003 ban would be aimed at reducing accidents and preventing crime, she told the regional assembly in response to a question from unelected Tatmadaw MP, Colonel Nyein Chan Aung.

Nilar Kyaw said motorbike accidents Yangon Region in 2018 had left 184 people dead and nearly 900 hurt, and in the first five months this year had caused 99 fatalities and injured 311 people. There were 51 motorbike-related crimes in 2018 and 11 between January and June this year, most of which involved robbery, the minister was quoted as saying, adding that about 8,000 motorbikes had been confiscated by police over the same period. 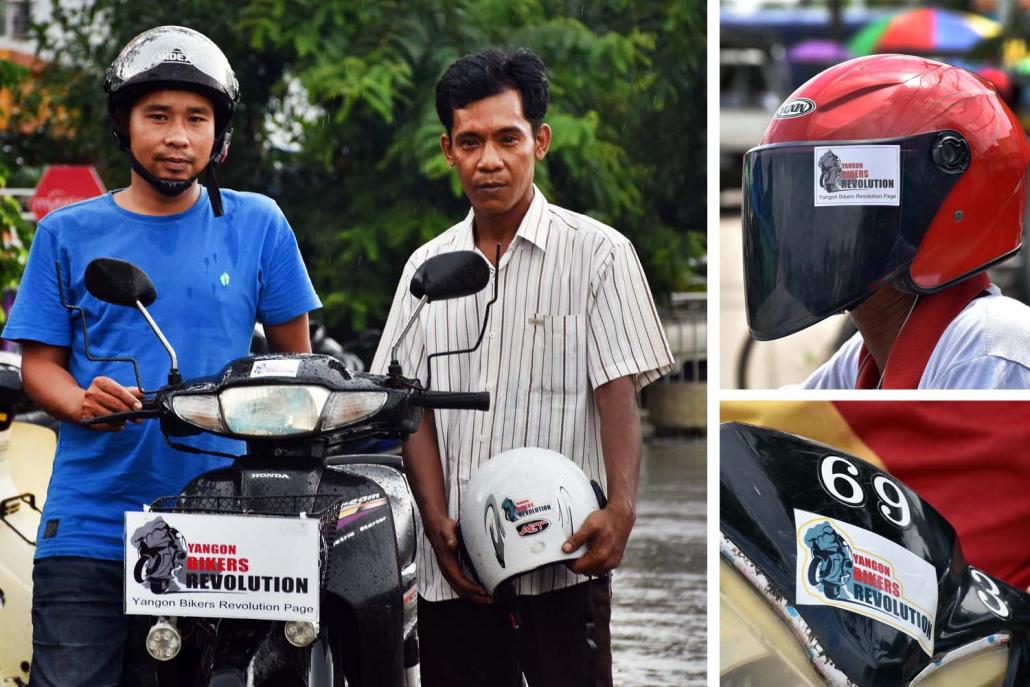 A campaign called “Yangon Biker Revolution” calls for the ban to be lifted in Yangon, starting with North Dagon Township. (Steve Tickner | Frontier)

When police launched a big crackdown on motorbikes in Yangon in the weeks ahead of the Thingyan new year festival in April, Ko Win Maung and two friends, North Dagon residents Ko Nay Lin and Ko Kyaw Lwin Oo, decided to take action, too.

They launched a campaign called “Yangon Biker Revolution” that calls for the ban to be lifted in Yangon, starting with North Dagon Township. They argue that the thousands of people in the outer townships who have come to rely on motorbikes in spite of the ban should be able to ride them as safe, rule-abiding road users – without the threat of what they consider police harassment. In the meantime, they are encouraging motorcyclists to wear helmets, drive safely and stick to general traffic rules, so as to set a good example.

Win Kyaw Maung said fines on bike owners who defy the ban are levied arbitrarily. While many get away with it, “some people have had to pay fines of up to K50,000,” he said, adding that in most cases the police did not issue receipts.

“We don’t believe that the fine goes to the government; instead it becomes pocket money for police,” Win Kyaw Maung said.

“That’s why we are trying to bring people together,” he said, explaining the decision to establish Yangon Biker Revolution. “We want to make it clear,” he added, stressing that the current ban was more of a grey zone that prevented a safe, rule-abiding motorbike culture from emerging in the city.

The group has grown to 150 members in North Dagon, where the campaign was launched, and another 30 in South Dagon, most of whom rely on motorbikes for their daily commute to work, which does not take them through the city’s inner townships.

“The members are conscientious about riding their machines safely,” Win Kyaw Maung said.

At the beginning of May, the group sent a petition calling for the ban to be lifted, and for the police to exercise leniency towards motorcyclists respecting general road rules in the meantime, to Yangon Region Chief Minister U Phyo Min Thein, copying various government departments and regional MPs. More than 600 North Dagon residents signed it

The petition quickly led to negotiations with Yangon’s Eastern District traffic police, resulting in an agreement on May 5 that they would not take action against YBR members that followed road rules and rode their vehicles safely.

Kyaw Maung described it as an interim arrangement before the regional government decides whether or not to lift the bike ban.

Despite announcing a crackdown in July, minister Nilar Kyaw had told the regional hluttaw on June 10 that steps were being made to lift the ban in some outer townships.

“We are preparing to allow the use of motorbikes in some areas on the city’s outskirts; but we have to deal with some Union-level ministries, so it will take time,” she said, adding that there was no actual law banning the use of the vehicles in the municipal area. “The ban was introduced by a municipal decree,” she said. 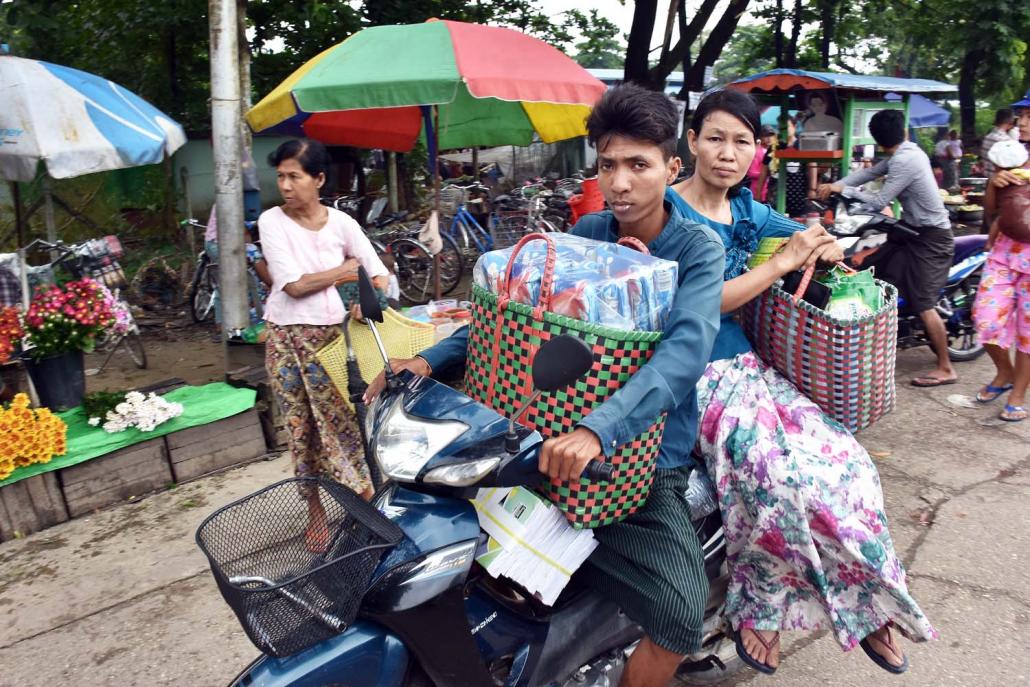 She was responding to a proposal by MP U Yan Aung Min (National League for Democracy, Shwepyithyar-2) for the ban to be lifted in seven outer townships: Shwepyithar, Hlaing Tharyar, Mingaladon, South Dagon, North Dagon, East Dagon and Dagon Seikkan.

Yan Aung Min told Frontier on July 10 that the ban should be lifted as soon as possible because it was out of step with reality.

“People are riding motorbikes anyway despite the ban because they need them for their daily activities so the sooner the ban is lifted the better,” he said.

He added that the ban was discouraging people from buying licensed vehicles, rather than the more common licensed ones.

“The bikes could be confiscated at any time, so why would someone buy a licensed bike, when an unlicensed one is K50,000 to K1 million cheaper,” said Yan Aung Min, adding that the government loses revenue if a machine is not licensed.

Regional MP U Myat Min Thu (NLD, Hlaing Tharyar-2), who is concerned about the use of motorbikes for crime, said strong enforcement was essential, regardless of whether or not the ban was lifted, because the current grey zone undermined the rule of law.

Meanwhile, official policy – where it is applied – remains hostile to motorcyclists.

The General Administration Department office at Hlaing Tharyar, on Yangon’s western outskirts, recently instructed all ward administrators to tell residents that unlicensed motorbikes and fuel-powered three-wheelers would be impounded, and that using a licensed machine would attract a fine of K100,000. This prompted incredibility from the public in an area where the roads are chock full of motorbikes during the rush hour, and where seemingly every household has one.

Frontier was unable to contact the township administrator but a woman who answered the phone at the office said the decision was made on June 16 and the instruction issued on July 2. The explicit objective of the order was to reduce crimes committed with the aid of motorbikes, she said.

Frontier met a motorbike taxi driver in Hlaing Tharyar called Ko Aung Zaw Moe who mocked the move, saying, “Even most administrators use a motorbike, so how can the order be enforced?”

Ko Kyaw Kyaw Tun Aung, a YBR member in North Dagon, is optimistic that the ban will be lifted in some townships.

“The regional government recently lifted the ban on riding bicycles in some downtown areas, which is an encouraging move,” he said.

The decision, which took effect on July 3, lifted a ban on bicycles riding along major thoroughfares such a Pyay Road, though trishaws are still banned from using them.

“If they can lift the ban on bicycles in some downtown areas why not lift it on motorbikes on the city’s outskirts?” Kyaw Kyaw Tun Aung said. 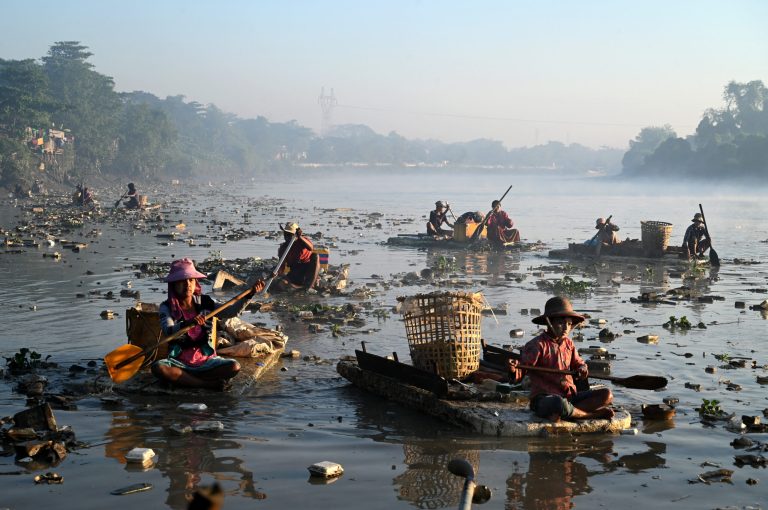