NAY PYI TAW — State Counsellor Daw Aung San Suu Kyi has announced a three-step plan to reboot the peace process at an event marking the fourth anniversary of the signing of the Nationwide Ceasefire Agreement.

The government signed the ceasefire with eight groups in October 2015 but the country’s most powerful non-state armies are still yet to ink the accord, leaving them on the fringes of the formal peace process.

Since the National League for Democracy government took office, the government has signed the NCA with just two additional armed groups. It has also convened just three Union Peace Conferences, despite a requirement that they be held every six months.

The steps are to continue holding the 21st Century Panglong Union Peace Conferences, to involve non-signatories of the NCA in political dialogue, and to ensure that the people are able to enjoy the fruits of peace.

The first step includes three elements: to develop a framework agreement to guide implementation of the NCA, to reach agreement on more points of a future Union Peace Accord, and to develop a plan for continuing the peace process beyond the 2020 election. 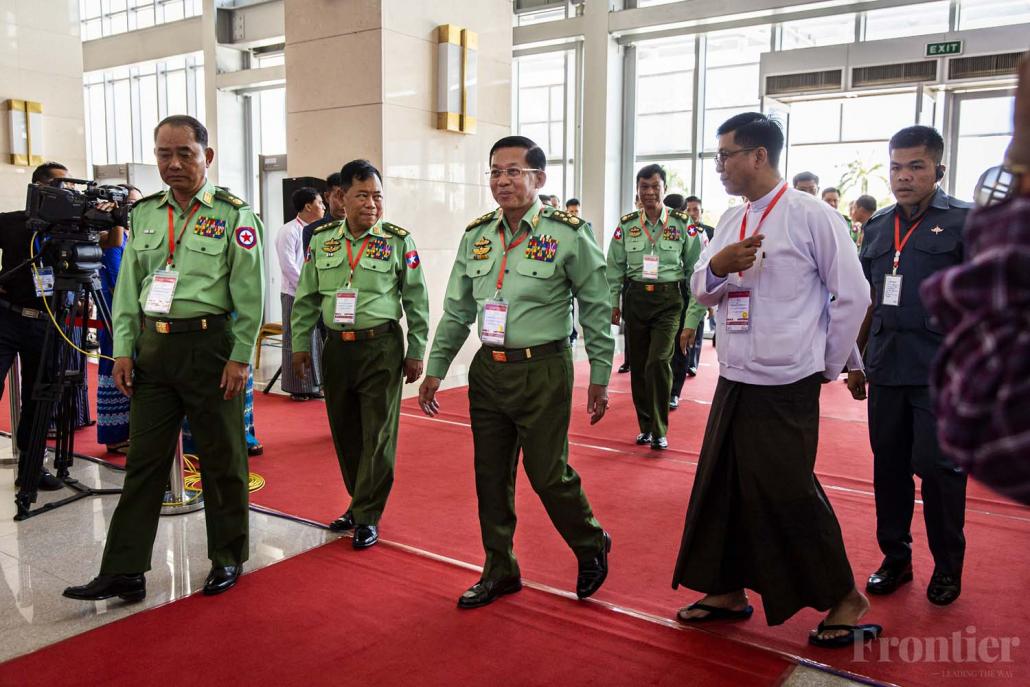 The state counsellor said that to reduce fighting and broaden involvement in the political dialogue, the NLD government would continue to seek the participation of non-signatory groups in the peace process.

“We will strive for the participation and inclusion of the groups who should be participating in the NCA,” she said.

Aung San Suu Kyi said the government had agreed in principle that there should be power sharing, as well as the sharing of revenue earned from taxes and natural resources, and that the states should have constitutions that give them greater autonomy.

However, Tatmadaw Commander-in-Chief Senior General Min Aung Hlaing outlined a different vision for the peace process, suggesting it would be better to focus on amending the schedules two, three and five in the constitution than to push for broad changes aimed at ensuring “self-determination”.

“Instead of the focus on a single desire that is incompatible with the country’s situation, paying attention to the possibilities suitable for our country will facilitate and speed up our peace process,” he said. All Nationwide Ceasefire Agreement signatories were represented at the ceremony except the Restoration Council of Shan State-Shan State Army-South. (Hkun Lat | Frontier)

Daw Saw Mya Yarzar Lin, a central executive committee member of the Arakan Liberation Party – one of the eight groups that signed the NCA in 2015 – said ethnic armed groups wanted equality and for members of ethnic nationalities to be able to determine their own future.

“I don’t want to comment on the senior general’s remarks, but I do want to say that we should have the right to determine our own fate,” she told Frontier at the ceremony.

The Restoration Council of Shan State, the armed wing of which is the Shan State Army-South, and which signed the NCA in October 2015, was the only signatory not represented at the ceremony.

In a statement released on October 27, the RCSS said the Tatmadaw had declined to grant permission for its chairman, General Yawd Serk, to travel by car from the group’s headquarters at Loi Tai Leng to Taunggyi while en route to Nay Pyi Taw, and it had cancelled the trip.

Tatmadaw spokesperson Brigadier General Zaw Min Tun said on October 28 that the military had not granted permission for Yawd Serk to travel by road from Loi Tai Leng to Taunggyi because the route was not safe for the RCSS leader.

However, Yawd Serk had reportedly been planning to hold talks with Shan people in Taunggyi, and in the past the Tatmadaw has sought to block such meetings.

At a sideline meeting on October 28, Aung San Suu Kyi and Karen National Union chair General Mutu Say Poe discussed the RCSS leader’s absence and the importance of holding a meeting of the Joint Implementation Coordination Meeting, a body established following the signing of the NCA in 2015.