A failed cotton project by two crony companies, a Tatmadaw land grab and extreme temperatures this year have contributed to a crisis for the deer population in a central dry zone sanctuary.

THE SHWE Settaw Wildlife Sanctuary, on the west bank of the Ayeyarwady River in Magway Region’s Minbu Township, is home to a growing herd of more than 500 Eld’s deer belonging to a species called Panolia eldii thamin.

The species, commonly known as Golden Deer, and called thamin wah (yellow deer) in Burmese, is also endemic to western Thailand. Though the deer are also found at the Chatthin Wildlife Sanctuary in neighbouring Mandalay Region, their conservation status in Myanmar is “near threatened”.

The Shwe Settaw sanctuary is also famous for its population of the critically endangered Burmese star tortoise (Geochelene platynota), which are endemic to Myanmar’s dry, deciduous forests.

Record temperatures this year in Myanmar’s central dry zone, reaching 47 degrees Celsius and drying up the sanctuary’s pools and ponds, have put the sanctuary’s deer under stress, but other, more human factors are making conservation difficult. Though the Forest Department of the Ministry of Natural Resources and Environmental Conservation is mandated with conserving the deer, the animals are largely grazing on a part of the sanctuary that the department does not control.

In the early 2000s, the ruling junta granted licences to the Htoo and Yuzana conglomerates, owned by the prominent military-linked tycoons U Tay Za and U Htay Myint respectively, to grow cotton on 20,000 acres (8,000 hectares) of the Shwe Settaw Wildlife Sanctuary, which covers 136,500 acres (55,240ha) in total.

The land allocated to the two companies was the main habitat of the deer. “The deer were affected because [most of] the trees on that 20,000 acres were cleared,” the head staff officer of the Shwe Settaw Wildlife Sanctuary, U Thein Lwin, told Frontier.

In 2010, Htoo and Yuzana walked away from the land, saying it was not suitable for growing cotton, and the 20,000 acres was taken over by the Tatmadaw. It also wanted to grow cotton and signs at the entrance to the property say in Burmese, “Tatmadaw cotton plantation” and “Produce while fighting and fight while producing”.

However, there is not a cotton plant to be seen and local residents said the Tatmadaw’s effort to establish the plantation had failed. Most of the land has been cleared to the horizon but Frontier could see deer sheltering in the shade of the few remaining big trees.

A Forest Department source who asked not to be named said that after the cotton project failed, the Tatmadaw permitted departmental staff to conduct conservation activities but it was not a satisfactory arrangement. When departmental personnel wanted to enter the land, they had to seek prior permission from the Tatmadaw each time, a laborious process that held up conservation efforts.

“It’s all controlled by the army, so we have to inform them when we need to do something with the deer or other sanctuary-related activities,” he said.

Frustrated with the situation, the Forest Department tried to induce the deer to move to areas of the sanctuary that are under its control.

Last year, the Magway regional government allocated funds to re-excavate and upgrade a big lake in the sanctuary, a project that forestry staff hoped would entice the deer to leave the Tatmadaw-controlled land. But the deer, being territorial, wouldn’t budge. “Deer are strongly attached to the land they inhabit,” said Thein Lwin. 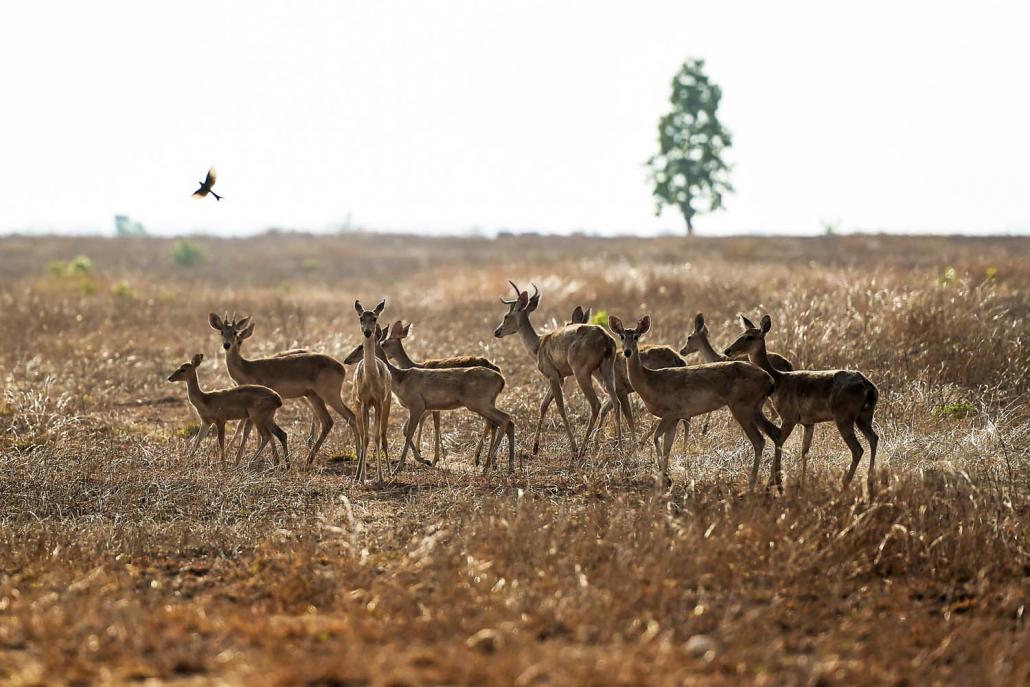 Eld’s deer seen on May 6 roam through the sanctuary, which has lost much of its forest cover, partly due to failed cotton plantations and the dependence of nearby villages on firewood for fuel. (AFP)

The unusually high temperatures this year dried up the sanctuary’s ponds and pools earlier than usual. This prompted urgent efforts by forestry staff to replenish water sources in the Tatmadaw-controlled area, but the department lacked resources.

After Thein Lwin posted a warning on Facebook that the deer were in danger of succumbing to a combination of extreme heat and thirst, a crowd-funding campaign raised enough to help refill the ponds and pools by funding the purchase of petrol and the hire of water-carrying tankers that conveyed river water.

Apart from extreme weather and habitat loss, another big threat to the deer population in the sanctuary, which is unfenced and has no security personnel, is poaching for Myanmar’s illegal but extensive trade in endangered or threatened wildlife. As Frontier was interviewing Thein Lwin, he received a report that some of his staff had found and disarmed 180 snares intended to catch deer.

The sanctuary has about 40 staff, including administrative officers. Up until four years ago it had two sentry posts but they closed because of budget cuts.

Another conservation challenge is the depletion of the remaining forest for firewood by residents of about 40 villages abutting the sanctuary.

“People here depend on firewood because there’s no electricity,” Thein Lwin said, adding that a family of five would normally use four or five bullock carts of firewood in a year.

Thein Lwin said the annual Shwe Settaw Pagoda festival, which usually falls in March, also contributes to deforestation because the temporary accommodation and vendors’ stalls are built from bamboo and timber taken from the sanctuary. It’s something that greatly concerns the department, he said.

According to Dr Thaung Naing Oo, director of the Forest Department’s Forest Research Institute, on average Myanmar lost close to 1.5 million acres of forest each year between 2010 and 2015, an annual deforestation rate of almost 2 percent based on total forest cover in 2010. Thaung Naing Oo said deforestation since 2015 is still being calculated.

Though the Shwe Settaw Wildlife Sanctuary is one of the most forested parts of the dry zone, the loss of many of its big trees means it barely resembles a forest anymore.

The Forest Department has prepared a management plan for the sanctuary in cooperation with Friends of Wildlife, a non-profit group established in 2007 by former staff of the department’s Nature and Wildlife Conservation Division. The plan has yet to be submitted to the regional and Union governments.

“We need more staff who can guard the sanctuary and conserve the forest,” Thein Lwin said, adding that an electricity supply for nearby villages was essential to halt the harvesting of timber for fuel. “Another challenge is to bring the deer to the part of a sanctuary that we control.”

TOP PHOTO: A male Eld’s deer stands alert in the Shwe Settaw Wildlife Sanctuary in Magway Region on May 6. (AFP)