An education centre at a monastery in Shwebo is making a positive difference to the lives of children who have grown up learning how to fend for themselves on the street.

Children in grubby clothes are a common sight as they roam dockyards, markets, railway stations and public places throughout the country. Some of them are smelly and dirty. Sometimes they are alone, sometimes in groups. Sometimes they beg, other times they steal.

When these children approach shops or restaurants, customers carefully watch their belongings. Shop owners shoo them away. Society hardly accepts them, regarding them as urchins or thieves, not offering them an ounce of pity.

No one ever asks where these children come from, where they sleep, what they eat and how they live.

At Shwebo Township in Sagaing Region, squeezed between a state primary school, an orphanage and a monastic school, is a slum whose residents mainly support themselves by recycling garbage or begging. 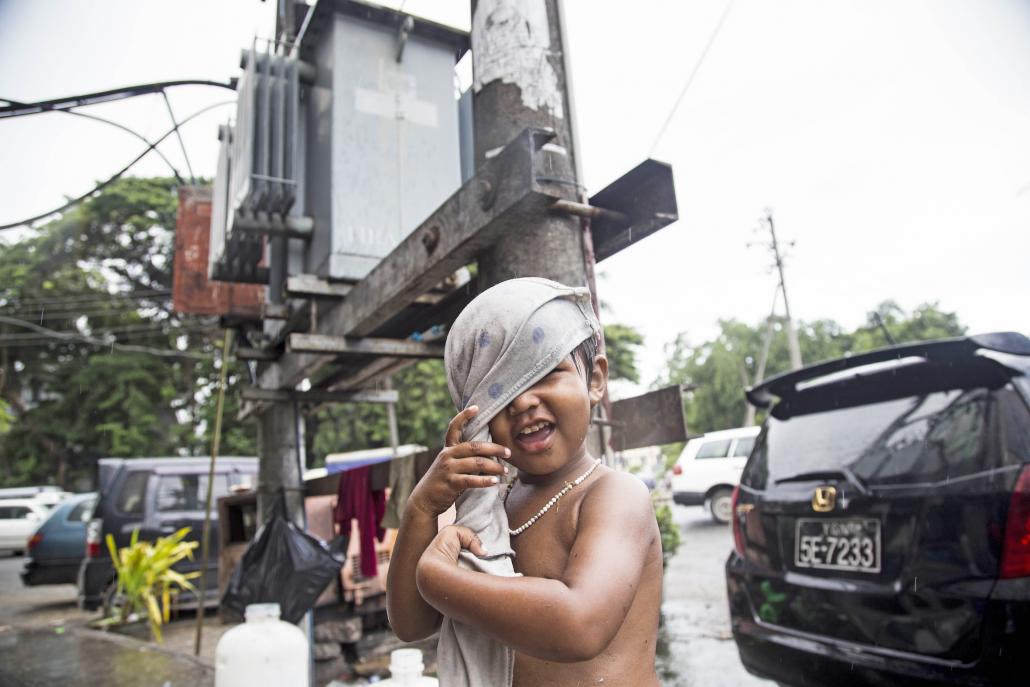 The monastic school was unable to enrol children from the slum but its patron, U Silananda, was aware of the difficulties they faced and wanted to help them.

The children’s plight had also been noticed by the Shwechinthae Social Services Group, a welfare charity established in 2000 in the compound of Shwebo’s Shwechinthae monastery, which is some distance from the monastic school near the slum.

In 2008, Silananda and the SSSG came together to discuss the plight of the slum children. As a result of the meeting, SSSG established the Shwechinthae Child Development Centre at the Shwechinthae monastery compound in August 2009.

As well as giving the children an education, the centre provides accommodation, meals and clothing, and is supported by 20 volunteers, its patron, U Tayzadipati told Frontier last month.

The slum children have diverse backgrounds. Some are orphans, while others have run away from home – in some cases because they were victims of parental violence. Some had a home but their parents could not afford to feed them. Most live on the streets, with no education or vocational skills.

Some of the children cannot read. Some are rough and rude, and have developed bad habits. Many drink alcohol or take drugs, chew betel and gamble. They are not interested in a formal education because they know they would struggle to fit in with the other pupils.

“If we recognise and treat the children as humans, teach them good manners and give them outlets in art and sport to cure their minds, then they might gradually become disconnected from street gangs and crime, and their resentment of society could lessen and their minds might become tender,” said Tayzadipati.

“The street kids’ situation is being ignored. You cannot lock them up to stop them committing crimes,” he said. Shwechinthae Social Services Group has established a school in Shwebo for children who live on the streets. (Supplied)

SCDC members have received training from the United Nations children’s agency, UNICEF, and have studied at a centre hosted by World Vision.

“Nobody wants to live on the street and everyone wants to be at home,” said Dr Win May Htway, country representative of ChildFund Myanmar, an NGO based in Sydney, Australia, that works to reduce child poverty. “Why do the kids end up on the street? One explanation could be that they are not safe at home or with their parents. Why are they not safe at home? If you look deeply, it could be the vicious cycle of limited education, poverty, ignorance and so on,” she said.

Initially, the centre was open three days a week, increasing to four days in 2010. It has been open five days a week since 2011. Classes begin at 10:30am and end at 3pm because some of the children need to spend part of the day working on the streets.

SCDC teacher U Aung Htet said the children were often found carrying weapons when they arrive at school because they felt a need to protect themselves.

“Many people don’t know that although these children have a violent past, they are simple and sweet. When you deal with them, you create mutual understanding, cohesion and trust,” he said.

An early challenge for the centre was that the children found it difficult to concentrate, said Aung Htet. The solution was introducing 15 minutes of meditation before each class, he said.

Daw Mu Mu, another teacher at the centre, said it became easier to build trust with the children and to communicate with them after classes were increased to four days a week. The school also provides accommodation for 40 children.

“You cannot stop the children from going back to the street unless you make them feel at home at the centre,” said Mu Mu, adding that the number of children registered at the centre stood at more than 200.

Initially, SCDC members encouraged children to attend the centre. Then the children took over that role, spreading news about the centre, and it now attracts children from different parts of the country, said Mu Mu. The children are reassured that if they have to leave for any reason there will be a place for them when they return. 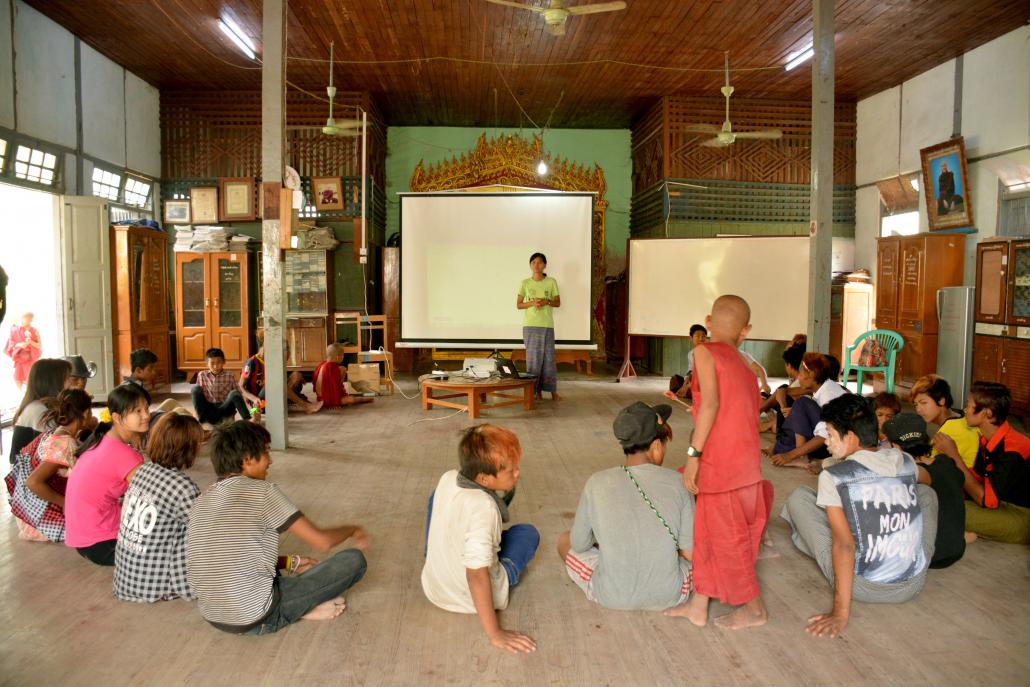 Many of the children have been jailed and are accustomed to using violence to solve problems. Some children, when they are psychologically distressed, cut themselves, she said.

“The children understand violence and bleeding is often the only outlet for them. We need to help them to find other outlets,” said Mu Mu.

A big challenge for the centre is dealing with drug abuse, particularly glue sniffing. When children are high from sniffing glue their behaviour can become reckless and some even attempt suicide. The centre has on occasion faced the disturbing and dangerous situation of having to deal with group suicide attempts.

SCDC staff responded to this problem by introducing a zero-tolerance policy for glue sniffing. It has resulted in many children having to leave the centre. One angry group responded to being expelled by threatening to set the centre on fire.

SCDC offers sporting activities, such as running, and has helped to establish football and basketball competitions with other schools. Participation in sporting activities and the teamwork it encourages has led to a reduction in bullying and glue sniffing, said Tayzadipati.

The centre’s location in a monastery compound with a teaching staff that includes Buddhist monks has provided opportunities for some of the boys to become novice monks, something many of them never thought possible. Ordaining as novices gives them recognition in society and their behaviour and speech changes accordingly, Tayzadipati said.

There was also an improvement in their performance in class, he said. Ordaining as a novice provided the boys with the key to open the door to formal society, from which they had been shunned when they were living on the street.

The school has raised funds to buy a video camera and has introduced classes in photography and filming. The children often go to nearby villages to record special events such as weddings or ordination ceremonies for monks. Gaining community recognition is something in which the children seem to revel, said Tayzadipati. Children toting video cameras were being welcomed in communities that once would have spurned them as street kids.

The centre is also arranging for children who lack Citizenship Scrutiny Cards to receive them, as well as offering vocational training to enable them to earn an income.

Street children are a common presence in Myanmar and there have been calls for the new government to provide them with special education facilities and social services, and ensure they can live in a safe environment. The SCDC has proposed that the government take formal responsibility for street children and child labourers.

The National Education Law enacted in September 2014 covers government schools, private schools and mobile and emergency schools, as well as special education schools, which are defined as institutions for teaching children with disabilities.

Although the law discusses the opening of emergency schools in areas affected by conflict, a lack of development or poor transport, there is nothing that addresses the situation confronting disadvantaged children living on the street.

These children have no signboard to beg for mercy, or for the special assistance they need to receive an education that can help them escape from poverty. What they need is a change in education policy.