From persecution to fiscal pressure for Magway journalists

Financial challenges loom over journals serving residents of a central Myanmar region that was notorious for its persecution of journalists under the previous government.

Five men were busy in a room about three square metres (10 square feet) in Zaylesoe quarter in the heart of Magway, the capital of Magway Region. The wall opposite the door was dominated by a big vinyl sign. It had a yellow and orange background on which was hand-written, Magway Journal.

“This sign was drawn by Win Tun, a cartoonist, who lives in New York and draws cartoons in international publications,” said U Zaw Myint Kyi, 52, the chief editor of Magway Journal.

Zaw Myint Kyi, a correspondent for Radio Free Asia with seven years’ media experience, and his colleagues had been dreaming since 2012 of publishing a journal in Magway, also known as Phanga Myay, “The Land of the Myrobalan tree”, a variety of plum.

Their dream was impossible before the Union Solidarity and Development Party government introduced media reforms in 2012, because Magway Region was notorious for the severe repression of human rights, including those of journalists.

In April 2014, a court in Magway sentenced DVB reporter Ko Zaw Pe to prison for a year on charges of trespassing and disturbing a civil servant over an interview he conducted in a government building.

The charges arose from a visit to the Magway Region Education Department with the parent of a student seeking information about a Japanese-funded scholarship scheme.

In May 2014, Mr Angus Watson, an Australian journalist working for DVB who had entered Myanmar on a business visa, was deported after being detained in Magway while covering a demonstration in support of the release of Zaw Pe. Watson, whose deportation was sought by the Magway Region Chief Minister U Phone Maw Shwe, a retired colonel, was accused of breaching the terms of his visa by participating in the protest, a claim he denied.

In July 2014, a court in Magway’s Pakkokku District sentenced the chief executive officer and four journalists from Unity Journal to 10 years’ jail with hard labour over a report alleging the military was producing chemical weapons at a facility in Pauk Township, a claim it denied. The charges against them included breaching the 1923 Official Secrets Act.

The sentence was subsequently reduced on appeal to the Magway High Court to seven years’ imprisonment. The “Unity Five” were released under pardon by President U Htin Kyaw in April.

As well as being hostile towards journalists, the Magway government scorned supporters of the National League for Democracy and prevented writers and artists from giving literary talks in the region. A speaker at one of the banned events was comedian U Bay Lu Wa, an outspoken NLD supporter.

There were also many arrests in the region of those who spoke in support of constitutional reform.

Under those circumstances, the dream of Zaw Myint Kyi and his colleagues was submerged under explicit or implicit threats from the authorities.

“During that time, when I was planning to publish the journal regardless of any risk to me, those close to the government wanted to be involved in its publication. That’s why I decided not to publish then,” said Zaw Myint Kyi.

It was the right decision.

More than a year ago a fortnightly journal called Myay Latt, a term for central Myanmar, was launched with the assistance of the regional government and became Magway’s first privately-owned publication. Myay Latt has a circulation of about 1,500 copies, down from about 3,600 when the regional government made its purchase obligatory, said its chief editor, U Win Kyi.

Myay Latt is struggling to survive. Its six editors and 25 reporters are not receiving a salary but take a quota of copies of the journal to sell and keep the proceeds.

“We made it publicly owned,” Win Kyi said. “Anyone interested in working as a reporter can contact us; if they don’t know how to write, they can supply us with information. We pay K1,000 a story but they have to sell at least 30 copies of each issue,” he said. The 24-page journal is sold wholesale for K300 and retails at K500.

Myay Latt was followed by Di Khit (“The Age”), which is no longer being published. Win Kyi said it closed because of a lack of experience in journalism, distribution and attracting investors.

Zaw Myint Kyi and his colleagues solved the investment challenge by selling shares in Magway Journal. They offered 250 shares at K50,000 each. The shares sold out, to 40 buyers, enabling the journal to be launched with an investment of K12.5 million.

Zaw Myint Kyi and his team finally realised their dream when Magway Journal was launched on June 10. It is published three times a month.

It is an example of the enthusiasm of journalists in Magway to practice their craft finding expression after years of suppression. It won’t be the last.

The journalists’ association of Magway Region is planning to launch its own journal, to be called MGY.

“We intend to present the regional news through the work of member reporters,” said U Naychi, MGY’s editor-in-charge.

The new publications will face many challenges and one of the biggest will be market sustainability.

U Toe, a bookshop owner in Magway for 11 years and distributor of newspapers, journals and magazines, said he welcomed the local publications but cautioned that they would face difficulties.

“They have come out at a time when the circulation of many newspapers and journals with many pages that are distributed nationally have halved,” he said.

“All the locally-based journals have only 24 pages, including four colour pages. They are doing it because of their interest in journalism but they will struggle. The political situation has calmed down. Newspapers sell best during elections and when they carry reports about issues such as the Myitsone dam in which people are interested.”

Win Kyi is under no illusions about the difficulties facing Myay Latt. “I cannot guarantee I will make money from the news and journal business,” he said.

All the publishers said they were motivated not by profit but a desire to create a platform for the region’s residents to express their opinions and to function as a check and balance on local government.

U Kyi Htay, who runs a trucking and oil business and has the biggest stake in Magway Journal with 35 shares, said he did not expect to gain financially from his investment.

Among the obstacles hampering the development of the journals in Magway is a shortage of competent reporters.

U Win Kyi said part of the problem was that the journals could not afford to pay reporters the same salaries as their counterparts at Yangon-based newspapers. 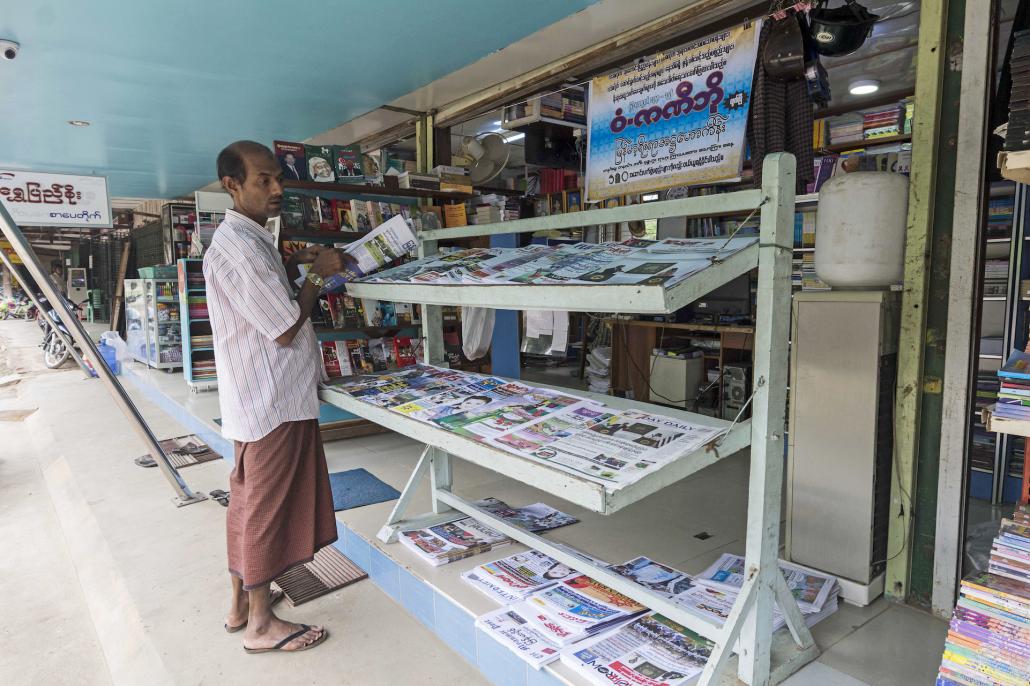 A man flicks through journals at a newsstand in Magway. (Teza Hlaing / Frontier)

U Ye Naing Moe, director of the Yangon School of Journalism, said that although some assistance was available to raise standards, another key issue was financial viability.

“Anyone wanting to start a media business needs to be prepared to make financial sacrifices,” said Ye Naing Moe, who has worked to develop journalism in Myanmar for decades.

“You need to be prepared to pay good salaries to attract the qualified staff you need to produce a product that’s well regarded,” he said.

“It is a positive development to have one or two publications serving the needs of residents and I wish them success, but I worry that independent media will not succeed because of financial reasons.”

Top photo: Staff from the newly launched Magway Journal hoist a sign with the publication’s logo at their office. (Teza Hlaing / Frontier)