From cursed treasure to British warplanes: the buried mysteries of Myanmar

From British Spitfire fighter planes to cursed treasure, Frontier introduces the buried mysteries of Yangon and beyond.

DYNASTIC WARS, encounters with pirates and mercenaries, wars with the British and the Japanese occupation have shaped the texture of Myanmar – and left some of its biggest mysteries deep underground. These are a few of the most tantalising.

The cursed riches of Inya Lake

A water monster and crates of Japanese ammunition are among the items rumoured to rest at the bottom of Inya Lake, created by the British in 1883 as a reservoir for the city’s water supply. The Kokaing Waterworks, as the project was called, flooded the area around what was known as the Inya pond, at the bottom of which was buried a cache of treasure for the forthcoming Buddha. Buried with the cache were inscribed clay tablets prescribing horrible itching upon anyone who plundered the treasure.

Reverend Tin Maung Tun, who lived beside the lake as a boy and spoke with Frontier in 2016, recounted the tales of former residents of the area, who swear they saw greedy treasure hunters and their families covered in hives. The hives persisted until they reburied the sacred treasure at the bottom of the lake.

The Great Bell of Dhammazedi

The location of the Great Bell of Dhammazedi, named after a 15th century Mon ruler of the powerful Hanthawaddy Kingdom, is a classic Myanmar archaeological mystery that treasure hunters still spend millions of dollars trying to uncover.

If the records can be believed, Dhammazedi’s bell, cast of bronze, silver, gold and other metals and encrusted with jewels, would have been one of the largest metal bells ever made. It was plundered from the Shwedagon Pagoda in the 1590s by the  Portuguese adventurer Filipe de Brito, who was based at Thanlyin, formerly Syriam. As de Brito tried to transport the colossal bell down the Yangon River it sank the raft and the barge towing it near a spot called Monkey Point, at the confluence with the Bago River.

Dhammazedi’s bell might be lying under as much as 7.6 metres (25 feet) of mud, assuming the course of the river has not changed in more than 400 years. Nevertheless, everything from sophisticated sonar equipment to the meditative power of monks has been used to try to find it.

Myanmar has a history of bell-recovery. The riverbed rescue of King Singu Min’s bell, which was accidentally sunk by the British, is documented in paintings near its resting place at the Shwedagon Pagoda. 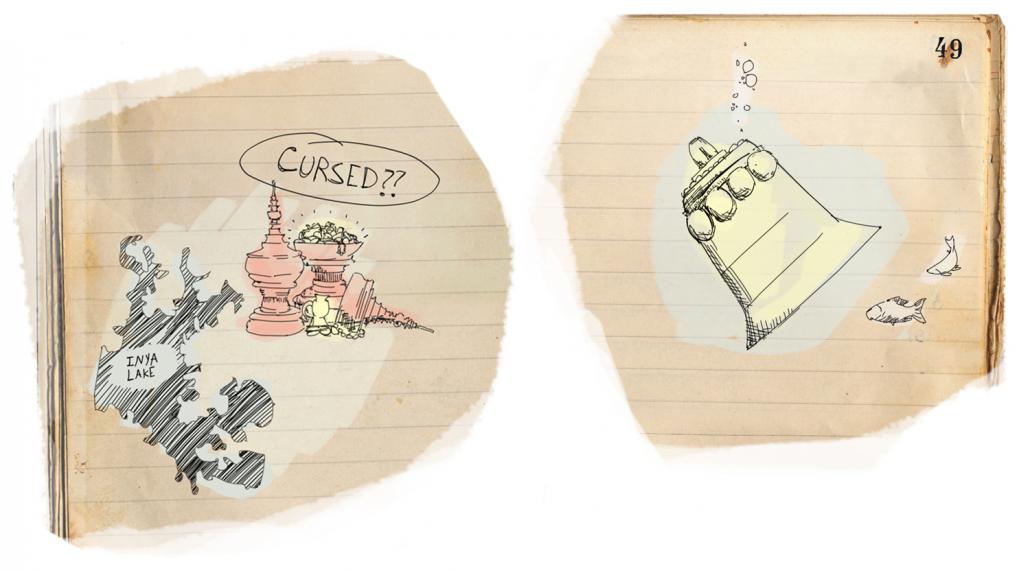 Legend has it that as the Japanese Imperial Army neared Rangoon in 1942 during World War Two, the retreating British air force buried more than 140 Spitfire fighter planes somewhere near Mingalardon Airport to keep them from enemy hands. According to the story, after the Allies recaptured Burma, the British left the planes where they were rather than sending them back to the United Kingdom.

The tale captivated a retired English farmer, Mr David Cundall, who spent years combing wartime records and tracking down witnesses. He finally attempted a dig in 2012 but it was unsuccessful. Cundall tried again in 2013, armed with sophisticated radar equipment and fresh testimony from the grandson of an RAF flight sergeant who had been stationed in Rangoon, but that search was also in vain.

A crumbling tomb near U Bein Bridge at the former royal capital of Amarapura on the present-day outskirts of Mandalay may or may not be the final resting place of a Siamese king. According to Burmese records, King Udumbara (Uthumpon, in Thai) was among hundreds of prisoners brought back by Burmese King Hsinbyushin after he sacked the Siamese royal capital of Ayutthaya in 1767. The tomb was built in 1796 for the king, who had reigned for only two months before abdicating to become a monk. He was supposedly buried at a monastery at Amarapura, in a plot that was gradually assimilated into a cemetery for foreigners and non-Buddhists.

The legend of the king’s tomb was mostly preserved in local lore until 2013, when a team of Thai archaeologists and Myanmar historians excavated the site and uncovered a burial urn decorated in royal style but containing the charred fragments of a monk’s robes. The supposed ashes of King Udumbara were moved to Mandalay City Hall, and the monastery ruins were due to be restored. However, infighting torpedoed the project, with one of the original Myanmar team members eventually dismissing the whole thing as a hoax.

The partly-restored tomb remains largely unnoticed by the throngs of tourists who visit U Bein Bridge. If you want to see it, just ask the locals where the king of Siam was buried. 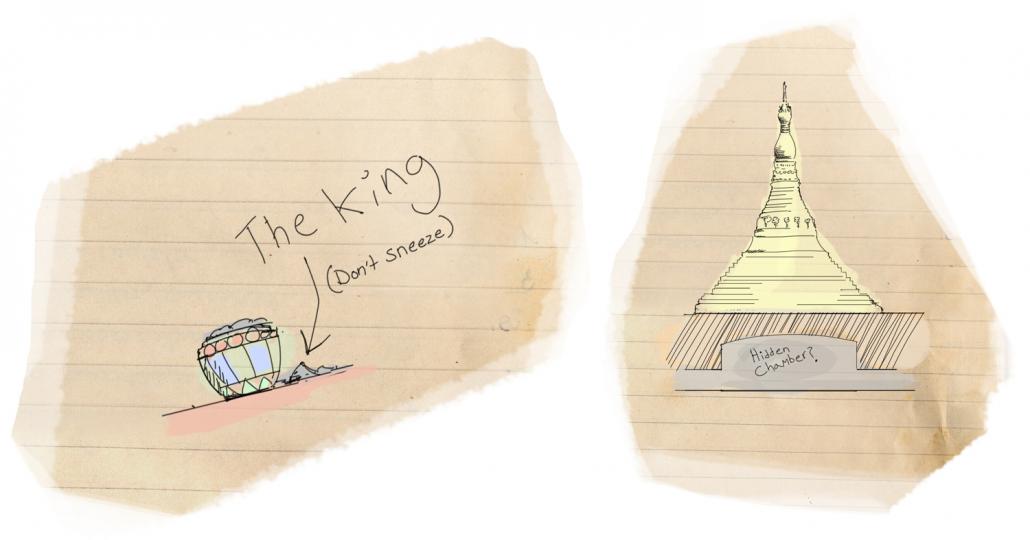 The lost kingdom of Suvarnabhumi

“Suvarnabhumi”, meaning “Golden Land”, is a term in the Sanskrit and Pali languages associated with ancient Southeast Asia. A sort of Hindu-Buddhist Atlantis, historians and archaeologists have long disputed its exact location. Myanmar scholars have claimed that Suvarnabhumi was in their own Golden Land, specifically within today’s Mon State, and was a possible ancestor to the historic Mon-speaking Thaton kingdom, which is believed to have thrived in the first millennium AD. They point to the discovery of ancient bricks and earthenware fragments as evidence, although given that Myanmar is a layer cake of bygone peoples, connecting these artefacts with Suvarnabhumi might be a matter of faith.

The chamber under the Shwedagon

Although an entrance to the Shwedagon Pagoda’s forbidden underground tunnels is in plain sight on its terrace, nobody is exactly sure what lurks within. Legends speak of traps, angelic guardians, an impossible labyrinth of tunnels, and the petrified body of Maung Kan, a mythical hero who turned to stone while trying to steal the Buddha hair relics the central chamber is believed to contain.

In a 1968 interview with the Rangoon-based Mirror newspaper, Mr D S Aparamay, a 73-year-old Armenian who grew up in colonial Burma, claimed that as a boy he wandered into the tunnels and made it all the way to the central chamber. He described a vast, round room containing angelic statues, amazing treasures and, in the centre, a small pool on which floated a model boat, shrouded to conceal whatever relics it may have contained. He said the pool lay in a beam of bright sunlight, perhaps (theorists have surmised) reflected from a network of mirrors connected to the surface.