Fishing for trouble in Myeik

Overfishing, corruption, indebted labour, boats going bankrupt and a lack of scientific data are creating problems for the seafood industry in Myeik.

In the mangroves on Masampa Island, a few miles off the coast of Myeik in Tanintharyi Region, mud crab fisherman Ko Maung Thu is trying to eke out a living. Every day when the tide rises he wades through mud and chest-high water to set his traps. At low tide, he collects his traps and assesses the catch of the day. Like his father, he has been fishing for crabs all his life.

Lately things have taken a turn for the worse. The crab population in the mangroves has decreased sharply compared to when Ko Maung Thu started fishing fifteen years ago.
“Before I would catch 100 viss of crab a week,” he said, referring to the Myanmar unit of weight equal to 3.6 pounds or 1.6 kilograms. “Nowadays I only catch 10 viss. Prices have gone up to K4,700 a viss. Small crabs are the most profitable.”

Ko Maung Thu lists three reasons for the decreasing crab yields: overfishing, not releasing infant crabs, and cutting mangroves to produce charcoal. Many villagers on the islands make charcoal because it’s free and the government does not enforce regulations banning the felling of mangrove trees.

Small-time fishermen on Masampa, where about 200 families, survive mostly from fishing, are facing other economic challenges as well. Many have debts with wholesale buyers that they cannot pay off. At the start of the year buyers, pay in advance, but if the catch falls short the fishermen are left with debt. The debt accrued at the start of the year prevents them from selling fish at better prices to other buyers.

Indebted fishermen can change ‘owners’ by request. When this happens, the new ‘owner’ settles the debt and lends the fisherman extra money, thereby perpetuating the cycle of debt. The fishermen on Masampa earn a pittance, so borrowing is necessary to make ends meet.

Rare fish on the menu

On the deck of an offshore fishing boat moored in Myeik’s port, Ko Ko Win was repairing a net, while day labourers put big blocks of ice into a crusher. Preparations for a new stint at sea were in full swing.

Ko Ko Win hails from Rakhine and is the captain’s assistant. That means he has to make small repairs to machines and take over the steering wheel when the captain dozes off.

The crew of six mainly tries to catch common pelagic fish, he said. “But we catch other fish too; sharks, bullshark mostly, rays, and sometimes dolphin. On the previous boat I worked on we dried and ate the bottleneck dolphins we caught. We couldn’t sell them on the market. Sharks and rays are an easy sell, though.”

Two grinning fishermen on the next boat proved that shark are a common catch by holding up two dead specimens.

Later, on a stroll through Myeik’s dried fish neighbourhood, I watched women smoking cheroots, sitting amid fish blubber as they processed sharks, tilapia, grouper, devil rays and sting rays, and tropical species such as triggerfish and parrotfish. The marine animals were cut up and hung on lines or spread on a tarpaulin to dry. The stench was beyond description.

Nobody thought it unusual that rare fish were being sold to make a living. Alternative livelihoods are scarce. Tourism in Tanintharyi Region has the potential to make a huge contribution to the economy, and to foreign exchange earnings, but is still in its infancy. Basic infrastructure is lacking, and the authorities are hesitant to grant permits to investors. 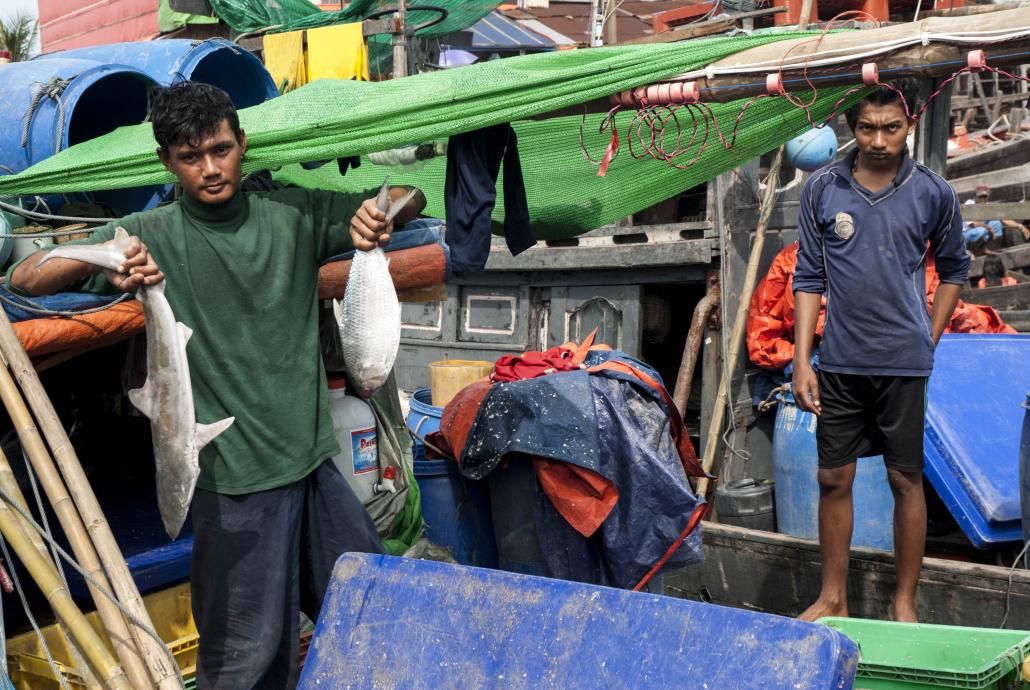 Overfishing has decimated the fish catch. “Ten years ago we caught ten times as much,” Ko Ko Win said. “There are so many fishing boats now. They use better nets and we keep fishing during the time when fish reproduce. We don’t have an off season.”

Ko Ko Win scoffed at the law that prohibits fishing from June to September.

“The offshore big trawlers pay money, so they can keep fishing. We also continue fishing, but we don’t pay.” He said there are no no-fishing zones around Myeik, but fishing boats are warned not to go near the three pearl farms and six naval bases in the region. The navy plays an interesting role in the fishing economy in Tanintharyi, said a Myeik resident on condition of anonymity. He had just returned from Maungmagan, a coastal village north of Dawei, where he had seen offshore trawlers fishing near the beach, well within the 10-mile limit.

“They break all the nets that locals have set near the beach,” he said. “The Department of Fisheries has asked the navy to catch the culprits, but the navy did nothing. Dynamite fishing is common as well. Again: nothing is done about it.”

He also alleged that the navy stops offshore fishing boats on the way to their fishing grounds. They can then either pay up or give fuel. Boats transporting fish for export to Thailand face the same fate, he said.

The fishing industry in Myeik is controlled by a handful of businessmen. The most powerful  is U Hla Than, who owns a soft-shell crab production company called Pyae Phyo Tun, as well as a fleet of fishing boats, cold storage facilities and a shrimp processing plant. He is also the chairman of the Myeik District Fisheries Federation and reportedly a shareholder of Myeik Shopping Mall and the Myeik Future Development Public Co. The latter develops properties and builds roads and bridges.

In 2013, U Hla Than, who is also the president of the Myeik Chamber of Commerce, led a 92-member Myanmar delegation to Samut Sakhon, a centre of the Thai seafood processing industry, to explore investment opportunities in the run-up to the ASEAN Economic Community.

U Hla Than declined to be interviewed by Frontier and suggested asking the manager of the Myeik District Fisheries Federation, U Yan Aung Myint, about Myeik’s fishing fleet.
U Yan Aung Myint said he did not have all the records of the registered fishing boats. Asked what the MFF thinks about overfishing, he said, “I have no idea,” clearly indicating it was not a topic he wanted to discuss.

The Myeik District director of the Department of Fisheries, U Sein Thaung, was more forthcoming. He said that the number of registered offshore fishing vessels in Tanintharyi Region rose from 697 in 2010 to 759 in 2014. In the same period the number of inshore fishing vessels rose from 10,021 to 11,009. Foreign ships were granted licences to fish in Myanmar’s waters, but their number fell sharply from 391 in 2010 to 139 in 2012. No fishing licences for foreign ships have been granted since March 2014.

It is not known how many foreign vessels fish illegally in Myanmar waters. The catches of the foreign fishing boats, which are often better equipped than Myanmar vessels, are not reported.
The Fisheries Department in Myeik District has no information on the fishing stock biomass.

“We only record fish exports,” U Sein Thaung said. “I don’t know exactly if the fish population is declining or not.” 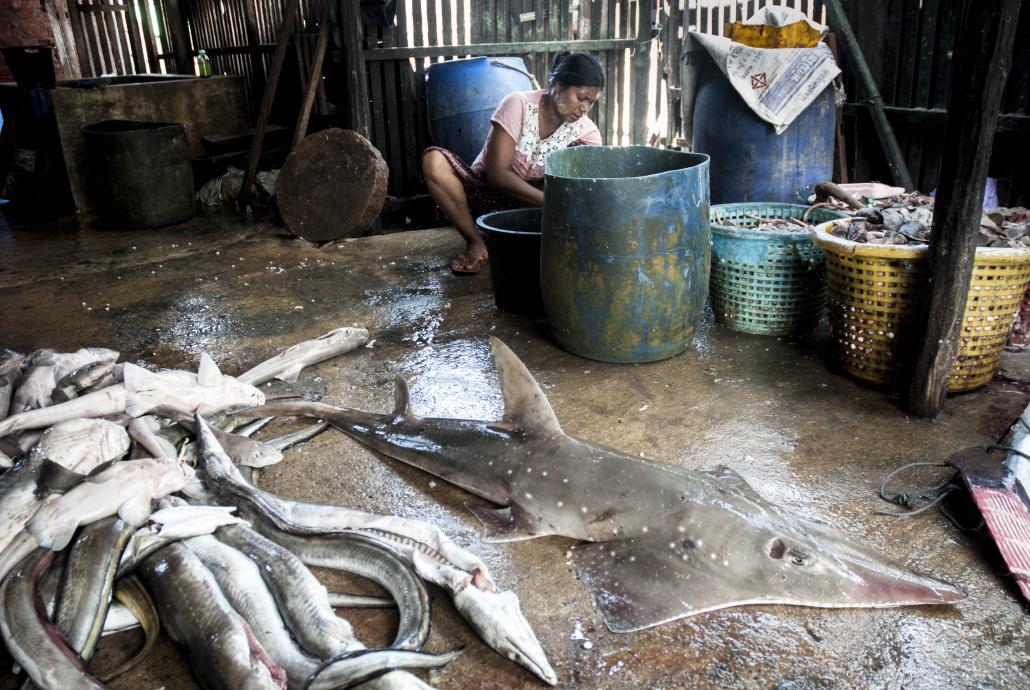 There is a paucity of data on fish stocks in Myanmar’s waters because deep sea research is regarded by the government as being militarily sensitive and has been blocked for 33 years.
However, data was collected in 2013 by a marine research vessel, the R/V Fridtjof Nansen, as part of a project involving the Norwegian Agency for Development Cooperation, the Norwegian Institute for Marine Research and the United Nations Food and Agriculture Organisation.

The data gathered since 2013 has yet to be published, and the government has been relying on research conducted between 1979 and 1983.

Fishing operators are not complying with quotas because they say the statistics are outdated.

In the meantime, U Sein Thaung said the Fisheries Department tries to curb overfishing by issuing regulations and setting a no-fishing period. The department also has plans to establish marine protection areas.

Almost none of the fish landing in Myeik is sold in Myanmar. Small fishing boats sell their catch to buyers who transport the fish to Thailand where better prices are paid. Larger fishing vessels transfer their catch to bigger ships that sail to foreign ports. All the best quality fish is exported. Lower quality fish is processed into ngapi (fish paste) or fishmeal for the domestic poultry industry.

In the absence of reliable data on fish stocks, the only available information is catch statistics and export figures.

In its 2014 report The State of World Fisheries and Aquaculture, the FAO lists Myanmar as the world’s tenth largest fish producer, with significant growth in the past decade. The catch more than doubled from 1,053,720 tonnes in 2003 to 2,332,790 tonnes in 2012, an increase of 121 percent that the FAO described as “astonishing”. It’s worth mentioning that the FAO figures were based on information provided by Myanmar government sources and may not be reliable.

The US-based Smithsonian Institution, an INGO, is trying to gather data on catches independently. It recently concluded a pilot project with a small group of fishermen which involved recording their catch on tablet computers and filing the information to a central database. The Smithsonian is also trying to improve working methods with the ultimate aim of certifying fishing boats and processing plants, a basic requirement for exports to the European Union.

The future may be brighter but the fishing industry has taken a bad turn in Myeik. U Win Myat, the general manager of Aye Yar Na Di Trading, is among those who are not having a good year. His company buys, processes and exports prawns. “We mainly export to Japan and Hong Kong,” he said. “The Japanese like the freshness of our product. But business is pretty bad now. Prices are high at kyat 2,500 a viss, but we have exported 30 per cent less than in 2014.”

Many boats are going out of business, said fisherman Ko Ko Win. “I came here because there’s poverty in Rakhine, and I’ll keep working here as long as I can make a salary. Someday I want to go back and work on a plantation in the land where I was born.”

Title photo: Fish hanging out to dry in one of Myeik’s smellier neighbourhoods. (Hans Hulst / Frontier)