Fishery workers hung out to dry after reporting alleged corruption

Labourers fired by the Department of Fisheries for reporting alleged corruption have tried in vain to seek redress from the Yangon Region government.

LABOUR disputes are common, and often volatile, in Yangon, thanks to burgeoning manufacturing and trading sectors, personnel-heavy government and company offices, and the inconsistent application of labour laws. A steady stream of rural to urban migration feeds a labour pool that is beyond the government’s ability to track, and the overburdening or bypassing of arbitration mechanisms prompts workers to take militant approaches.

Direct action by workers can invite violent crackdowns, but it can also produce wins. One recent example is the sit-in protest outside the Yangon Region government compound staged by more than 200 workers from factories in Yangon’s Hlaing Tharyar Township. This ended on October 23, two days after it had started, when Yangon Region Chief Minister U Phyo Min Thein and regional Immigration and Human Resources Minister Daw Moe Moe Su Kyi met the workers and pledged to help resolve their disputes with their managers over the alleged violation of agreements on pay and unionisation.

However, another group of workers who protested outside the gates of the regional government at the same time got the cold shoulder from the chief minister. Numbering about 50, they were daily wage labourers handling freight at a fish market in Yangon’s Kyimyindaing Township for the Department of Fisheries, which is under the Ministry of Agriculture, Livestock and Irrigation. When six of them complained in April that team leaders were extorting illegal placement fees from newly recruited workers, they were summarily fired by the department for inciting protest.

Though the fisheries department workers were able to meet with the chief minister later, their grievances remain unaddressed. Phyo Min Thein merely told them to comply with a take-it-or-leave-it proposal the department had offered them in June and which the workers continue to reject: accept freight-handling jobs with the department in another township, or stay jobless.

This is in spite of a letter from the regional government, also in June, ordering the department to restore their jobs. The letter also ordered the firing of the team leaders accused of corruption, which suggests the workers’ original complaint had been confirmed, or at least believed.

It’s a paradox that the chief minister was able to intervene in disputes at privately owned factories while being unable, or unwilling, to broker a compromise or impose a better solution for workers who were employed by a government department, and who had lost their jobs for making an apparently credible report of corruption.

However, though the chief minister is nominally the most senior official in Yangon, township branches of government departments, including fisheries, are part of Union ministries; their staff report to superiors at higher levels of the department in a hierarchy that ends in Nay Pyi Taw and formally bypasses Phyo Min Thein’s office. The chief minister’s role is meant to be supervisory, but his authority is made ambiguous by the 2008 Constitution, which devolves political representation and some executive power, in the form of regional governments and parliaments, without devolving administration.

On October 23, the day the Hlaing Tharyar factory workers had their sit-down with the chief minister, regional government staff told the fisheries department workers that he was too busy to meet them as well. Instead, they had to settle with meeting the regional immigration and human resources minister.

Ko Min Zaw was among these disgruntled labourers. He told Frontier that, in January, the Freight Handling Committee of the Yangon Region General Administration Department announced the need for 150 new freight workers at the Sanpya fish market in Kyimyindaing, where 600 in total are required.

He said that five freight workers who had risen to the position of team leaders then acted as brokers in recruiting the new men and registering them with the fisheries department. For this, they took K1.2 million from each new worker, most of whom came from poor villages and towns upcountry, in Mandalay and Magway regions.

Though registered with department, the freight workers are not salaried and are paid on the day based on how many crates of fish they carry. Shifts at the market run from 5am to 10am and typically earn a worker between K10,000 and K15,000 – about twice as much as the typical casual labourer earns.

Min Zaw said that he and five of his colleagues were appalled at the corruption they had seen and reported it in April to Daw Soe Soe, who directs the Yangon Region branch of the GAD, which plays a key coordinating role between different government departments. The workers’ letter named the team leaders responsible: U Tin Ko, U Thant Zin Oo, U Win Soe, U Ye Aung and U Zaw Linn. Min Zaw and his five colleagues were fired by the department a week later on the grounds that they were inciting other workers to protest.

The fired workers demanded justice in letters sent to the office of the chief minister. On June 26, a letter signed by Naw Pan Thinzar Myo, the Kayin ethnic affairs minister for Yangon Region who is often deputised to represent the chief minister, was sent to the Kyimyindaing branch of the GAD. The letter ordered that the allegedly corrupt team leaders be fired and that Min Zaw and his colleagues be re-hired.

On receiving this instruction, the fisheries department fired the team leaders. But for the workers like Min Zaw who had complained, the department proposed its own solution: that they would be re-hired at Thiri Mingalar Market in Hlaing Township, five kilometres to the north, because resuming their Kyimyindaing jobs was out of the question. The workers’ refusal to accept this led to them joining the factory workers at the sit-in, demanding their original jobs back.

Min Zaw said their meeting with the regional immigration and human resources minister on October 23 gained them nothing. “The minister and other officers present told us to just accept the transfer to another township, but we said we didn’t want to. So, the minister suggested that we complain in an official letter.”

For Min Zaw, this response was exasperating: “We have sent official letters multiple times and now they suggest sending another letter.” 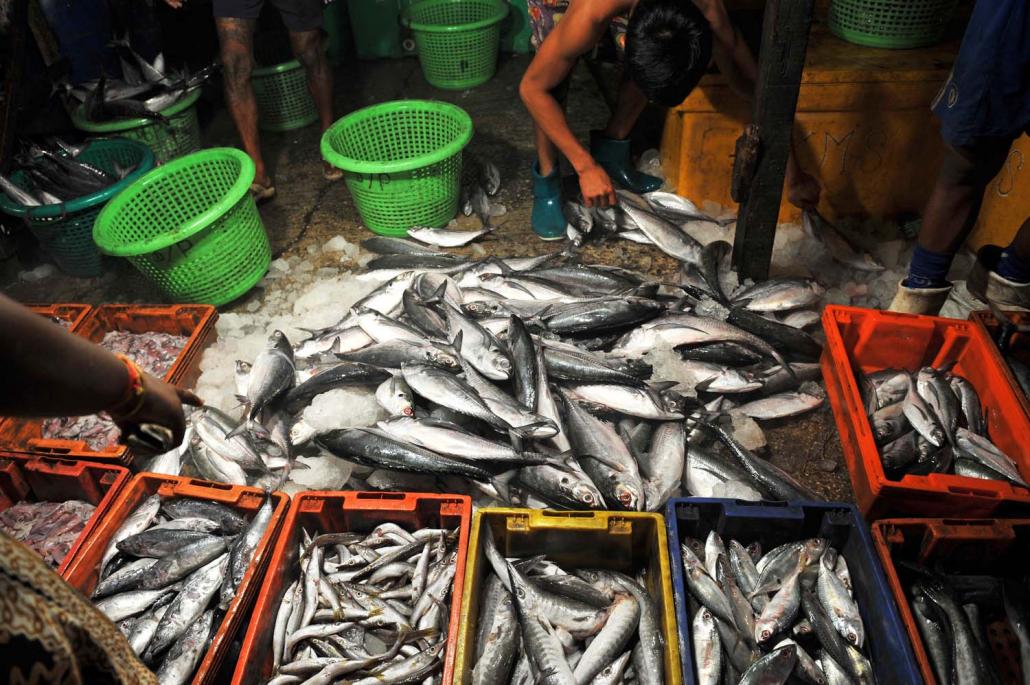 “It shows the disconnect between the regional government and the department in question,” she told Frontier. “The workers at the privately run factories had some success on meeting with the chief minister, but the fishery workers’ case is still dragging on without result.”

Factory workers who met with Phyo Min Thein told Frontier that, during the October 23 meeting, the chief minister had pledged to ensure the resolution of their disputes at the Hlaing Tharyar township arbitration committee, and had said he would warn the factory managers to stick to workplace agreements.

The workers had complained of colleagues being fired for taking part in union activity and that salaries had been deducted after workers took agreed-upon periods of annual leave. Ma Thae Mon, who had been fired from the Kai Shan garment factory, told Frontier, “Our protest was successful and it was worth spending two days and one night in front of the Yangon Regional government office.”

However, five of the factory workers have since been charged by police under section 19 of the Peaceful Assembly and Peaceful Procession law for inciting people to protest “with intent to shatter state security, law and order”, which caries a maximum three-year prison sentence. This suggests the authorities are keen to ward against copycat sit-in protests, despite the concessions made.

Frustrated that they had not made the same breakthrough as the factory workers, 50 of the fisheries department workers on October 29 marched the four kilometres between Yangon’s City Hall and the gates of the Yangon Region government compound in Ahlone Township. At the gates of the compound, the six workers who had been fired staged another sit-in protest.

One of them, U Tun Kyaw, told Frontier at the site that he fully understood why most of the marchers had not stayed for the sit-in. “They have to work for their livelihoods,” he said. “But we were happy to get the support of our colleagues [during the march].”

This second sit-in lasted three days. On November 1, Phyo Min Thein invited them into to the government compound to hear their grievances for the first time. However, for the workers, his response was depressingly familiar.

“The chief minister told us to accept the transfer to another work site, and that it was not possible for us to have our original jobs [in Kyimyindaing] back,” said Tun Kyaw. “He couldn’t even answer our questions about what we had done to deserve this.”

Though the workers stopped their protest after this meeting, Tun Kyaw said they would keep petitioning the government for justice, and planned to send letters to the president and the state counsellor.

Daw Soe Soe, the Yangon Region GAD lead administrator who had received the initial corruption complaint from the workers, told Frontier on November 8 that their case had been “solved” by the offer of jobs outside of Kyimyindaing.

“According to management procedures, we can’t give them back their jobs at the same work site,” she said, reiterating the original justification for firing them: that, if they stayed at the Kyimyindaing market, they would encourage other workers to protest against the fisheries department, using “group power” to press more demands. “If they don’t agree with the decision, they cannot continue as government registered workers.”

She added that transferring to the Hlaing market would actually represent an improvement for the workers, because they could earn more money there. “They have a good opportunity to transfer to another, better work site. We announced their transfer in June, but they haven’t responded to it yet.” 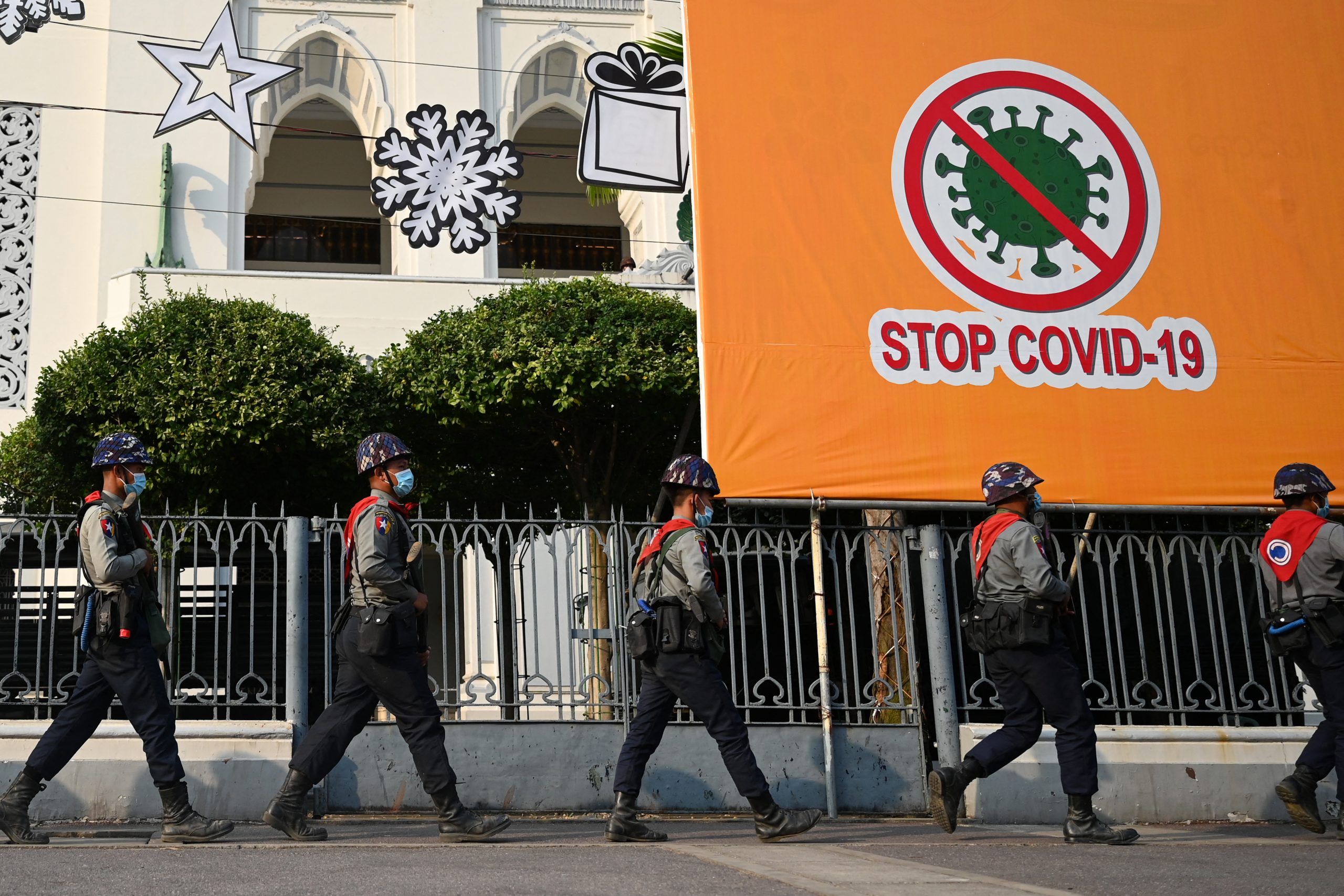