Fighting the odds on Gideon Hill

In the remote mountains of Kachin State, a crack force holds on to a strategic outpost in the face of heavy Tatmadaw offensives aimed at cutting the KIA territory into two sections.

IT’S A foggy Sunday morning and relative calm has descended at the post on Gideon Hill, which overlooks the steep Kachin mountainside. It’s a welcome change for the Kachin Independence Army mobile brigade that mans the outpost; they were shelled several times during the night by Myanmar’s armed forces, the Tatmadaw.

During the lull, soldiers stand around chatting or listen to music on their smartphones. Two men play chess using safety pins from used grenades as pieces. Others prepare for the next offensive, cleaning their assault rifles or fixing propellant powder to 60mm mortar shells.

Lieutenant Utsa Chiang looks worried as he examines the enemy position, in an abandoned village named N’Hkram on a hilltop more than a kilometre away, through a pair of binoculars. “They just finished carrying their 120mm mortar rounds uphill and now they are putting on their helmets,” he said, referring to the Tatmadaw soldiers. “And here comes the officer from under the school.” 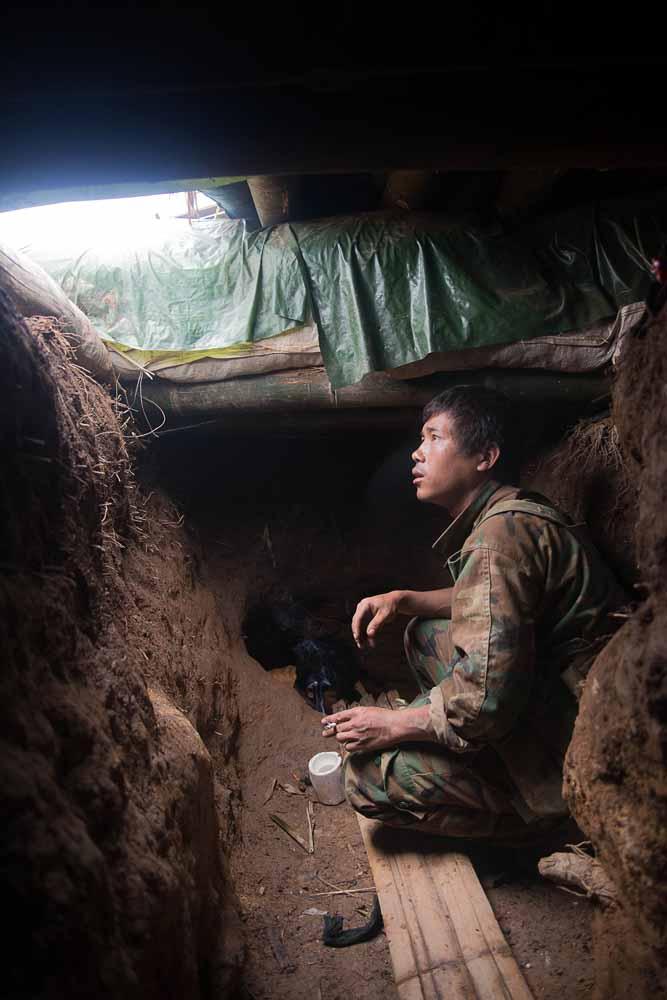 The Tatmadaw officers have set up their command centre in a bunker dug under the abandoned village’s school. International humanitarian law prohibits the military use of schools, but generally only when students or teachers are present. Nevertheless, the Tatmadaw tactics have created a dilemma for the KIA, Lt Utsa Chiang says.

“We cannot shoot back at them,” he tells Frontier. “If we were ever to shell the school, they would make a public scandal and accuse the KIA of war crimes.”

As he straps on a bulletproof vest, the commander of Gideon, a Major “Rambo”, orders his soldiers to their battle positions. With the exception of the two chess players, who are obviously determined to settle their game before the Tatmadaw arrive, the pace picks up at the outpost as combatants gear up and jump into their trenches. When the Tatmadaw mortars sound, even the chess players are at their stations.

Gideon trembles for 10 minutes as the 120mm mortar shells explode on the mountain’s slopes, some in the vicinity of the outpost. Inside the trenches it’s quiet, the soldiers praying and listening anxiously to the blasts in order to gauge the distance between the explosions and their foxholes. Soon the KIA counter-shelling begins, and the two sides trade fire across the mountain range for another 30 minutes.

Gideon was never expected to become a military outpost; until a few months ago, the hill held little strategic significance. “We never had a base here before,” explains the tall and charismatic Major John N’Gan, who commands operations in the area encompassing Gideon. “We just had a small outpost of seven soldiers at the village of N’Hkram.”

But on August 17, the Tatmadaw overran that post and threatened to advance on Gideon. From here, they could continue east along mountain ridges toward the China border and potentially slice the KIA’s territory into two sections. It would also leave the town of Lazin, the second most important after Laiza, vulnerable to attack, and possibly trigger a humanitarian crisis: the nearby IDP camps at Maga Yang would have to be evacuated, while the remote camps near border posts 6 and 8 would be rendered inaccessible.

Maj John N’Gan says the name Gideon was given to the hill in 2013 by two Baptist pastors. Recent events have given this choice a prophetic significance. In the Old Testament, Gideon, a judge of the Israelite tribe, was chosen by God to lead a small force of 300 soldiers against a vastly larger army.

For the KIA soldiers – most of whom are fervently Christian ­– this as a divine sign rather than a coincidence, and it seems to reinforce their determination to hold the outpost.

Instead of 300 Israelites, the KIA headquarters dispatched its mobile brigade, an elite fighting force that has a swooping eagle as its insignia. The brigade took Gideon in a quick operation and has held it in the face of massed attacks. “It was very hard in the beginning,” concedes one soldier. “We were digging and fighting, fighting and digging all the time – under the heavy monsoon rain, in the mud, swarmed by insects and leeches.” 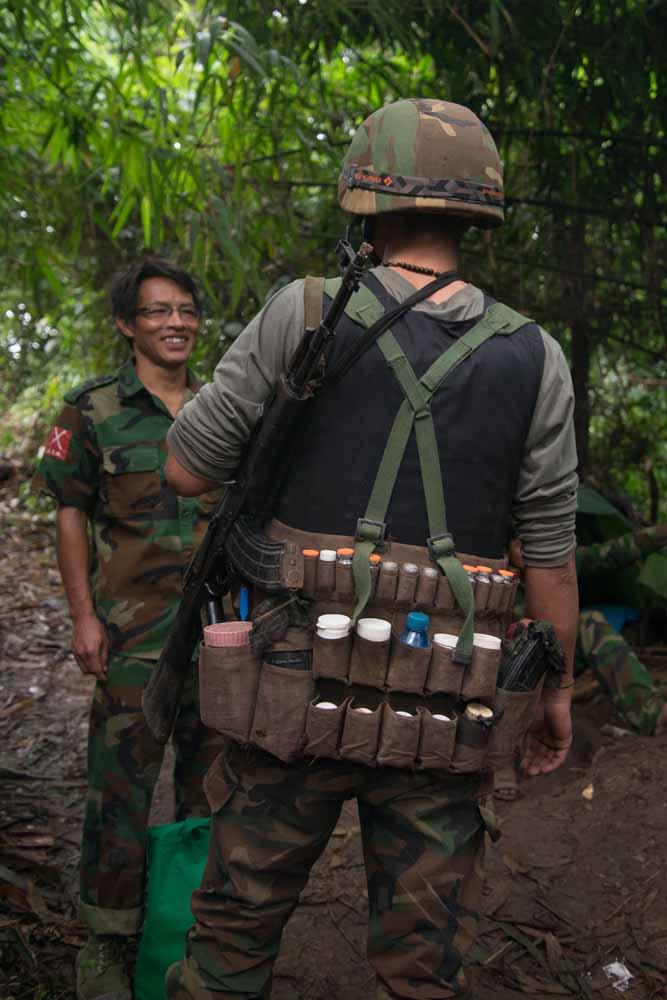 The Tatmadaw reacted in its usual manner: It sent in an overwhelming but uncoordinated force. Wave after wave of Myanmar soldiers were sent uphill,  only to crash up against the Kachin fortified positions.

A handful made it to the top of Gideon – their graves are alongside a bamboo fence near the Kachin lines. KIA officers refuse to comment on their own casualties, but admit that the airstrikes have taken a toll.

Tired of unsuccessful frontal attacks, Tatmadaw strategists instead opted for an attack from the rear. The plan was set in motion in late September but quickly fell apart in the face of a counter-offensive, KIA soldiers told Frontier. Lt Utsa Chiang – a member of KIA Special Forces who once volunteered to fight with the Karen National Liberation Army when Kachin State was too quiet for his taste – says the fighting “lasted one day and was very violent”.

“I don’t know how many soldiers they lost, but after the Burmese army withdrew from the hill we could see a lot of blood and bandages everywhere,” he adds.

Two months after it took on strategic significance, the Gideon outpost remains firmly in KIA hands. For most of the day it’s wrapped in a thick fog, and the KIA soldiers are well entrenched in deep bunkers and foxholes that are protected by barbed wire, spiked bamboo fences and claymore mines.

The trails are muddy but no one dares to walk off them for fear of stepping on an unexploded mortar shell, landmine or punji stick – a sharpened spike stuck in the ground that’s locally known as ma sawn.

Craters from mortars and other explosives scar the hill. The once-dense foliage has mostly been burned away. An unexploded bomb of Chinese origin, dropped on October 7 by a Tatmadaw MiG-29, has become a sort of local landmark – one in front of which seemingly every KIA soldier posted on Gideon poses for a selfie.

Clothes abandoned by Myanmar government soldiers during their retreat hang in the trees or lie in the mud, and the Kachin soldiers proudly show a collection of Tatmadaw insignias taken as war trophies. The morale of the KIA soldiers appears to be high, probably helped by the two delicious warm meals they receive each day.

Though the monsoon has brought many hardships for the Kachin combatants, it has also protected Gideon from the Tatmadaw air force, which is less effective when visibility is poor. KIA soldiers dread the blue sky, preferring instead the thick clouds.

“Once we heard on the radio that bombers had taken off from the airport at Myitkyina, which is only five minutes away. We all went to the bunkers but in the meantime clouds formed around the hills and the planes could not see us anymore. They flew over us in a circle for 30 minutes and then left,” recalls Lt Utsa Chiang.

But the monsoon is over. In Kachin State, the protective clouds are beginning to thin. Senior KIA officers are aware that as the weather improves the Tatmadaw is likely to launch a succession of ground offensives, backed by both aircraft and artillery. The Tatmadaw has finished building a road to N’Hkram that will enable it to transport heavy artillery up into the mountains and is waiting for the mud to dry.

Multiple grenade rocket launchers been spotted in Myitkyina alongside foreign technicians supposedly charged with operating these complex weapon systems. The situation is calm on Gideon, but as a senior Kachin officer puts it, “It’s when they are silent that we have to worry about the Burmese.”

For their part, the KIA mobile brigade stands ready for the next battle. Like the 300 Israelites with whom they share an unlikely bond, they are committed to a fight against the odds.