Breast milk is best for babies in the first six months of their lives but many mothers use formula because they are unaware that it can be detrimental to an infant’s health.

AT HER HOME in Bago Region, Daw Cho Cho Nyein was busy preparing a meal of baby milk formula for her granddaughter, Khin Kyi Mon Khant, who is eight months old.

When Cho Cho Nyein had finished preparing the formula, she poured it into a bottle and began feeding it to her granddaughter, who was nestled comfortably on her lap.

“We have been feeding her the formula since she was 45 days old. We don’t only use breast milk, but also formula, because her mother had to go back to work. Other mothers and doctors have recommended us to use this,” said Cho Cho Nyein.

Three months after giving birth, Khin Kyi Mon Khant’s mother had to return to work so she sent the baby from their home in Yangon to Cho Cho Nyein in Bago.

This is not unusual; economic pressures mean many mothers have to return to work soon after giving birth. While civil servants are entitled to six months’ maternity leave, most private companies provide around three months.

The need to return to work is a major reason why many babies in Myanmar are fed formula, said Dr Lwin Mar Hlaing, deputy director of the National Nutrition Centre, under the Department of Public Health. Some parents feed their babies rice, which is sometimes mixed with the formula. But either can have a detrimental impact on their health, she said.

“Babies do not have well developed digestive systems so breast milk is best,” she said. “It is better than formula. The digestion system can be damaged if they are fed rice in the first six months. Even though it is very soft, it can cause damage, and the baby is more likely to suffer from diarrhoea.”

Lwin Mar Hlaing said that feeding only formula to babies can make them sick, stunt their growth and affect their mental development. It is also important that mothers breastfeed their children within 24 hours of birth, she said.

The World Health Organization recommends that newborn babies are exclusively fed breast milk until they are six months, but a survey conducted in 2015-16 found that only about half of the parents in Myanmar are heeding this advice.

This is not only because of economic pressures, however. Traditional beliefs, lack of knowledge, misleading advertising and incorrect advice from health professionals also encouraged parents to feed their newborns formula and solids instead of breast milk.

Many parents feed their baby a mixture of formula, rice and honey in the first six months, said Dr Thelma Tun Thein, a nutritional adviser.

“It’s bad for their stomach, kidneys and intestines. Mothers don’t understand the disadvantages of it and how it will affect their child’s life for 10, 20, or 30 years. Breast milk is the best.”

She said that some instant formula companies were making false claims that their products can make children taller and improve their intelligence while failing to properly disclose the possible negative side effects.

Thelma Tun Thein said that mothers who work can express and store their breast milk in a refrigerator so it can be fed to their child while they are away.

Not everyone is convinced about the benefits of exclusive breastfeeding, however. 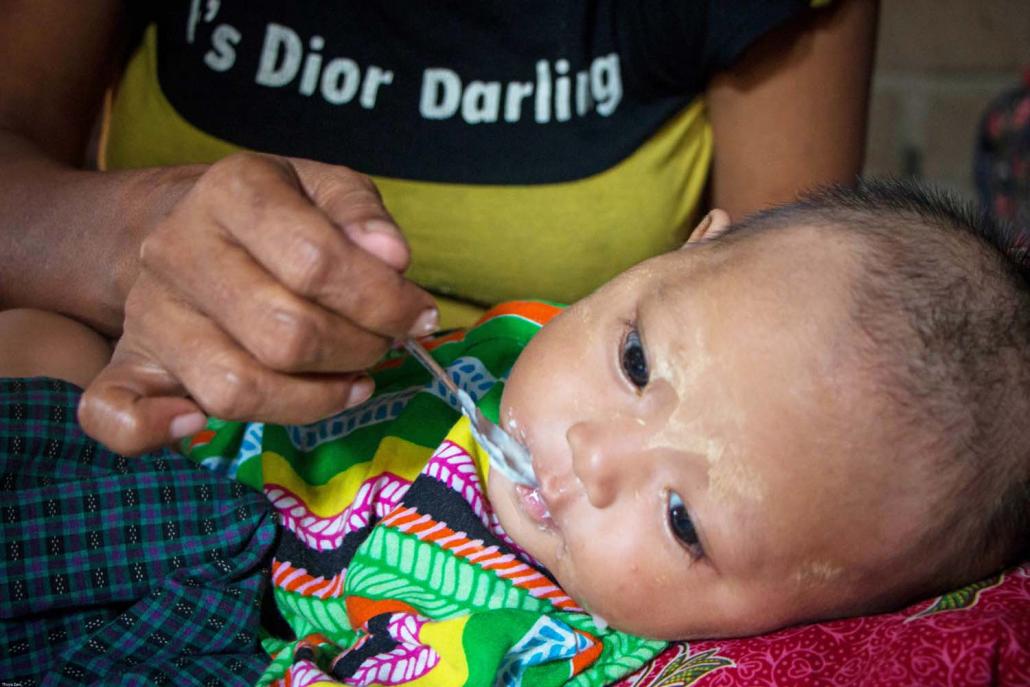 Ma Yu Yu Khaing, a mother of four in Yangon’s South Dagon Township, said she mostly fed her children breast milk, but also gave them a mix of rice and formula once a day.

When Frontier visited her home, Yu Yu Khaing was preparing a meal for her two-month-old niece by mixing rice with water and cheap milk powder. Written on the package of the powder was a warning, in English: “Not to be used as infant milk substitute.”

“The rice is good for the baby,” Yu Yu Khaing said. “Itchy red bumps from mosquito bites disappear because of the rice and the baby gets good nutrition. Nothing [bad] happens to the baby.”

Research by the WHO has also found that increasing breastfeeding to near-universal levels could save more than 800,000 lives a year, most of them children aged under six months.

Meanwhile, research in Myanmar by Save the Children in cooperation with the National Nutrition Centre and other partners found that the number of mothers who breastfeed babies within 24 hours of birth had fallen from 75.8 percent in 2010 to 66.8 percent in 2016.

In Myanmar, many mothers are unaware of the health benefits of breastfeeding for both them and their baby. A major challenge in Myanmar is that many new mothers are advised by medical professionals to use formula, said Lwin Mar Hlaing.

“It is difficult. Some medical staff recommend [mothers] to use formula during the first six months, instead of breastfeeding, even though they know about the benefits of breastfeeding. We are doing advocacy with the government and private staff, but there is little cooperation,” she said.

Ma Thidar, a mother from Yangon’s Bahan Township, said she fed her baby milk formula on the recommendation of a nurse, who said it would make the child more healthy and clever than if she fed breast milk. When she asked her paediatrician, he also recommended using formula and mentioned a specific brand. “He recommended it not only to me but also to all the mothers,” she said.

Later, Thidar learned that exclusive breastfeeding had been proven to be the best option for children. But when she told this to a neighbour who was fretting about not being able to afford formula for her baby, the woman didn’t believe her. “As mothers, our lives are dominated by formula companies,” she said.

In February 2018, Save the Children published a report, Don’t Push It, which outlines methods used by the baby formula industry to undermine global efforts to promote breastfeeding. The report said that formula makers were using dishonest methods to sell their products, and were engaged in a “battle for baby bucks”.

The report highlighted the aggressive marketing strategies of the six companies that comprise about half the global breast milk substitute market, which in 2018 is expected to be worth US$70 billion, up from $15 billion in 1998.

The report accused companies of routinely breaking the International Code of Marketing of Breast-Milk Substitutes, introduced by WHO in 1981. The report said manufacturers were breaking the code by promoting formula in shops, supermarkets and health facilities, as well as online, and that their products were often “labelled with misleading information and images”.

Mr Andy Nilsen, head of communications, advocacy and campaigns for Save the Children Myanmar, said it was important that parents were aware of the benefits of breastfeeding.

“Education is key to everything,” Nilsen said. “If the mother and father understand and really value how important breastfeeding is, then they … will carry on breastfeeding, but if they don’t have the knowledge they won’t do that.”

In August 2018, Save the Children launched a three-month campaign in Yangon, Mandalay and Nay Pyi Taw to promote the health benefits of breastfeeding to about 8,000 mothers.

“We are trying to build a movement to support breastfeeding mothers, but it’s not just about the mother,” Nilsen said. “It’s about the father, best friends, aunties and uncles, the boss at work; it’s about everybody creating a supporting environment so that a mother can breastfeed their baby in the first six months and beyond.”

The campaign also involves working with Myanmar businesses, and Nilsen said that since it began KBZ Bank, one of the most high-profile businesses in Myanmar, had made a commitment to establish breastfeeding-friendly spaces at their workplaces.

Providing such facilities is important.

“When the mother breastfeeds their child, [we want them] to actually feel like they have a supportive environment around them,” Nilsen said.