Fever clinics: the first line of defence against COVID-19

Fever clinics are being set up around the country to check people for symptoms of the viral disease and ease the burden on hospitals, but a planned reopening of schools could force many of them to move or close.

In early April, Dr Mar Mar Kyi from the Department of Medicine at the University of Medicine (2) in Yangon led a training programme for volunteer health workers.

The training led to the creation of the first fever clinic. One of the less well-known responses to COVID-19 in Myanmar, fever clinics have since been established throughout the country.

The fever clinics have a truly frontline role, their main purpose being to screen patients for symptoms of COVID-19 and refer them if necessary to the nearest public hospital for further checks.

The fever clinics were established as a pre-emptive measure to ease pressure on the understaffed and under-resourced health system, which would struggle to cope with even a moderate outbreak of the disease. 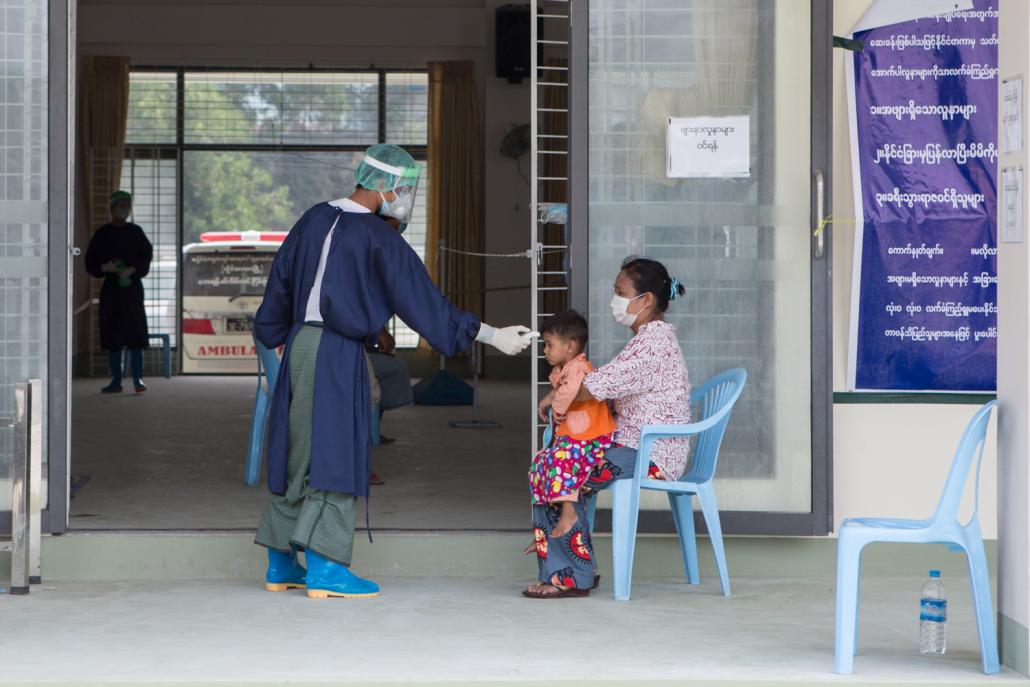 By acting as a screening point, fever clinics also help to prevent anyone with COVID-19 symptoms from going directly to a hospital for examination, which could result in vital hospital staff being quarantined if the patient tests positive.

Fever clinics have since been established in 17 townships throughout Yangon Region with funding from community groups and individuals, said Dr Nay Min Htet, a spokesperson for the clinics established in the region.

Nay Min Htet said he was unable to provide figures for the number of clinics throughout the country because they are operated by members of their host communities.

“For example, a fever clinic in Mandalay was launched by the Myanmar Medical Association (Upper Myanmar), but members of the community in Kengtung [in eastern Shan State] contacted us directly to ask for advice about establishing a clinic there,” he told Frontier on May 15. 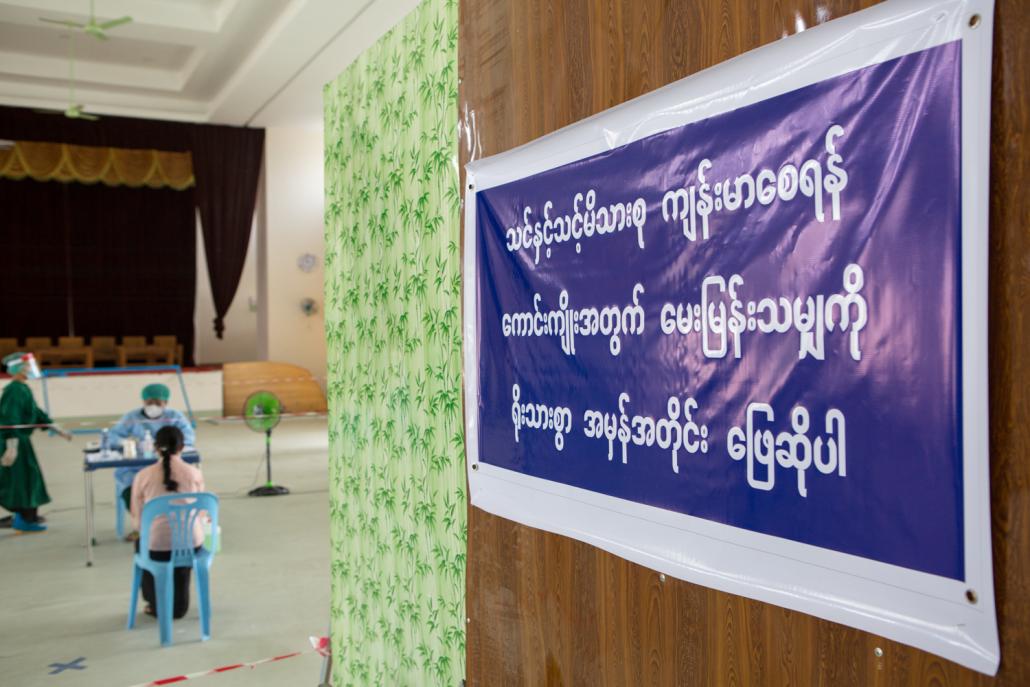 A sign in the Hlaing Tharyar fever clinic requests patients to “Please answer the truth for the sake of you and your family’s health.” (Thuya Zaw | Frontier)

Volunteers and doctors working at the fever clinics in Yangon did not return home for the first few weeks after they opened.

This was because they wanted to avoid any misunderstandings or discrimination in their neighbourhoods following incidents in which medical personnel have been ostracised because of their work with COVID-19 patients.

One of the first fever clinics to be established was at Hlaing Tharyar Township, an industrial area in western Yangon.

Dr Naing Min Htut, who is in charge of the Hlaing Tharyar fever clinic, said he has not returned home since it opened in the second week of April.

“We volunteers are staying in a house nearby,” he told Frontier. 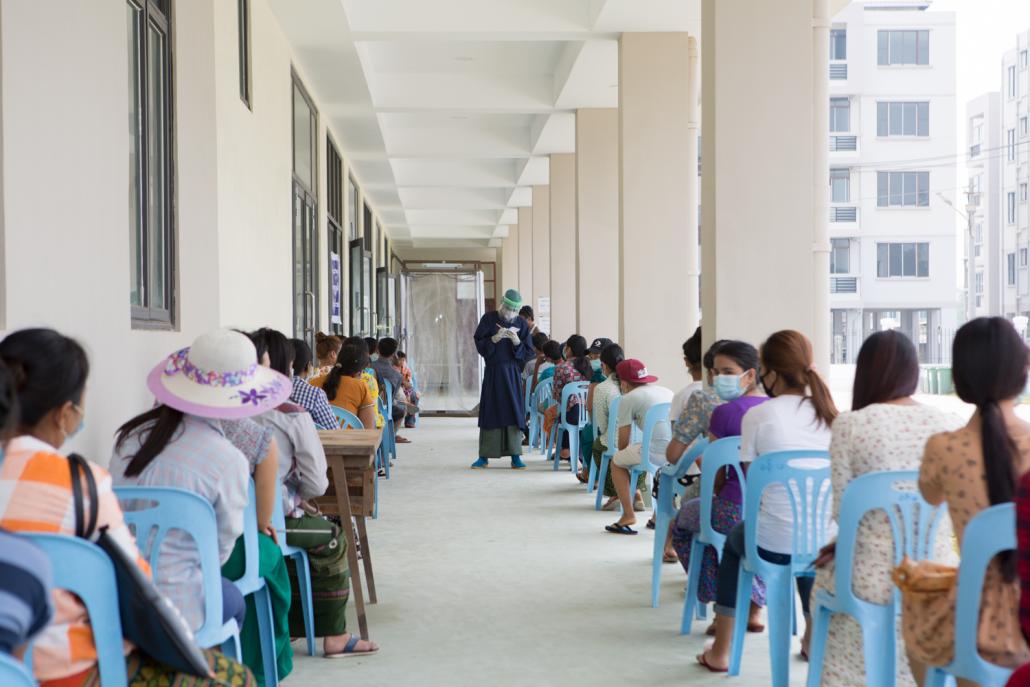 The Hlaing Tharyar fever clinic treated a large number of patients in late April after a translator at a factory in a nearby industrial zone tested positive for COVID-19. (Thuya Zaw | Frontier)

When Frontier visited on April 27, the clinic was dealing with a large number of patients.

Naing Min Htut said the clinic had averaged about 35 patients a day to begin with, but the number had jumped to about 100 a day in late April.

“Most of the patients are not sick, but came here at the suggestion of local authorities,” he said, adding that most of the clinic’s recent patients were from the nearby Chan Yi shoe factory, which has about 8,000 workers.

Workers were encouraged to visit the clinic for checks after an interpreter for a Chinese mechanic at the factory tested positive for COVID-19 on April 26. Their neighbours were scared they might be infected as well, so a local administrator had advised them to visit the clinic and request a letter that they were COVID-free. However, this was not possible because fever clinics do not test for COVID-19 and many of those with the disease exhibit no symptoms.

“We explained to them [workers] that we can’t issue a [certificate] for their health situation,” Naing Min Htut. 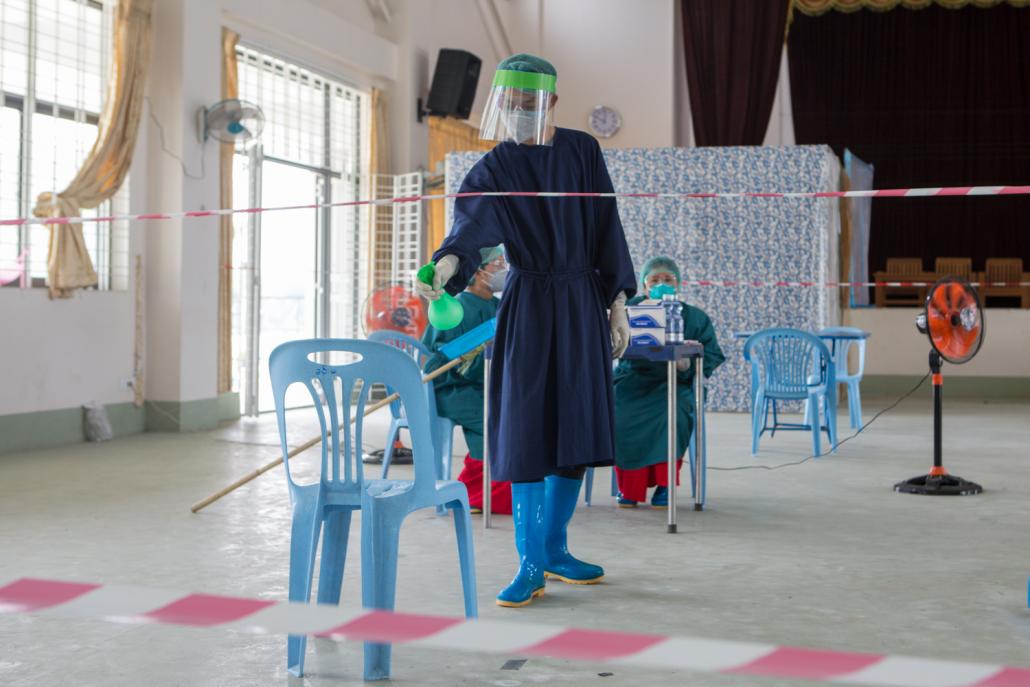 Ministry of Health and Sports guidelines for fever clinics specify procedures for screening patients that mean volunteers will not have to be quarantined if a patient is later confirmed as having COVID-19. (Thuya Zaw | Frontier)

All fever clinics had to suspend operations on April 17 and 18 when the Ministry of Health and Sports arranged training for the volunteers. The clinics re-opened on April 20 after the ministry issued guidelines stipulating that the clinics must be supervised by an assistant or specialist doctor and supported by an assistant doctor, two nurses and two to four support staff.

The guidelines include a list of the equipment that a clinic must have and detail the procedures for screening patients and, if they show symptoms, for arranging for them to go into hospital quarantine. This is important for ensuring that those working at the fever clinics are not exposed to COVID-19, even if a person who attends the clinic is later confirmed as having the disease.

Naing Min Htut welcomed the release of the guidelines. Without them, he said, “people might think that volunteers and doctors should be quarantined if a patient visits a clinic and later tests positive for the coronavirus.”

“We closely follow the guidelines and don’t touch patients,” he said, adding that the clinic did not take more than 15 minutes to complete the health checks. 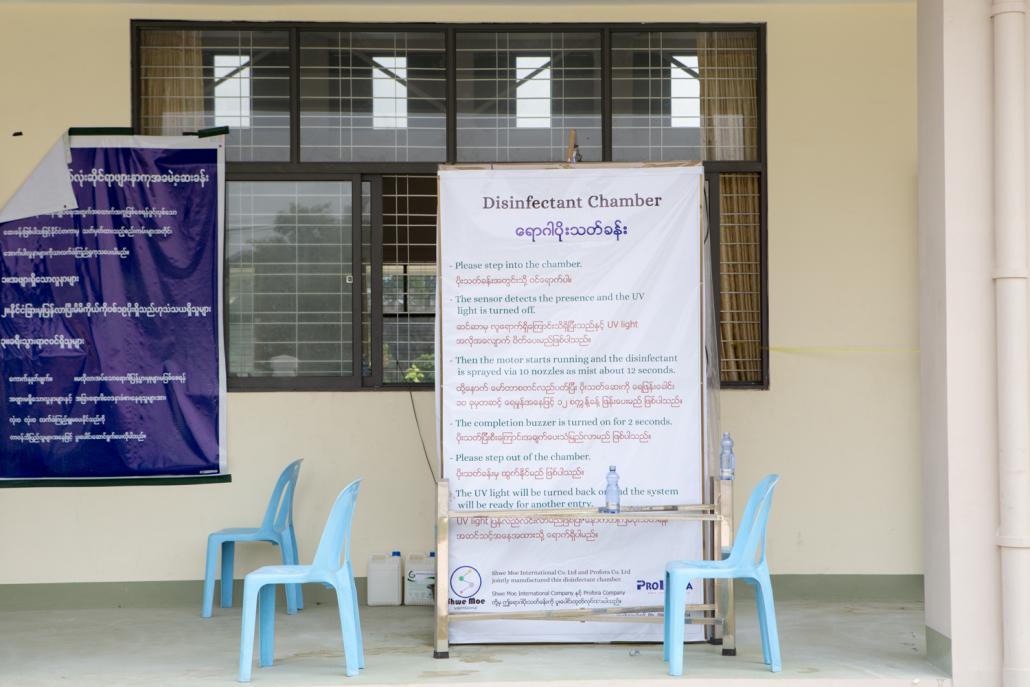 A sign explains how to use a disinfectant chamber. (Thuya Zaw | Frontier)

Nay Min Htet said plans to re-open schools could create problems for some fever clinics, as seven of the 17 in Yangon Region are in the compounds of government schools.

The academic year is expected to begin in July, two months later than usual, because Nay Pyi Taw has instructed state and regional governments to return schools being used for community-based quarantine to the Ministry of Education by June 15.

Makeshift quarantine facilities have been established at thousands of schools throughout the country since March, when large numbers of migrant workers returned from neighbouring countries, especially Thailand. 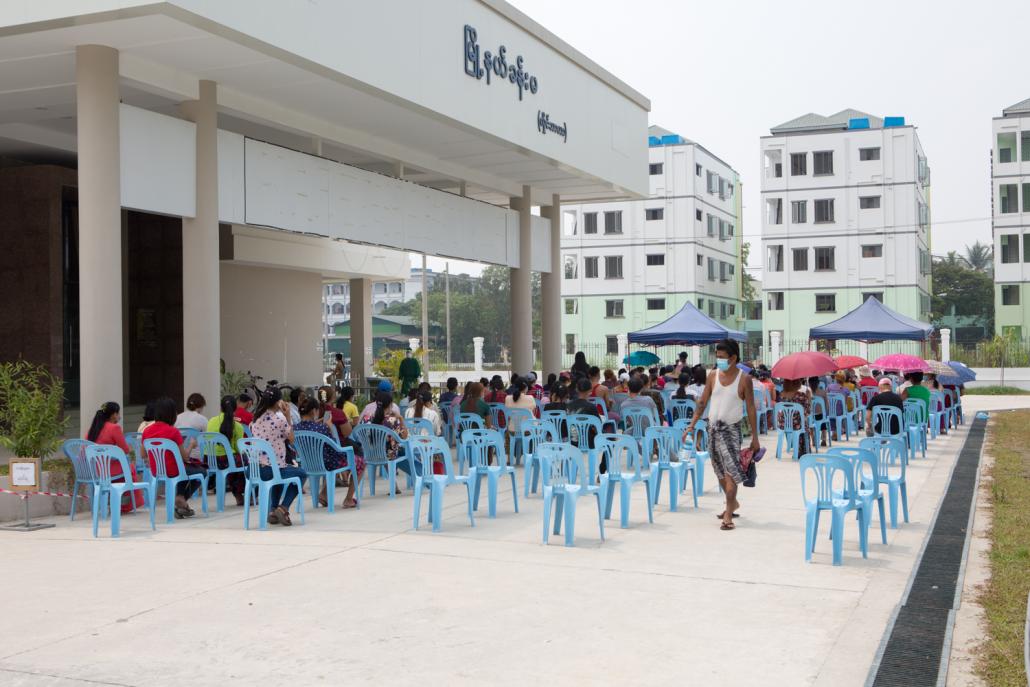 The Hlaing Tharyar fever clinic is in a community hall but almost half of the clinics in Yangon Region are in schools, which means they may soon have to move or close. (Thuya Zaw | Frontier)

On May 12, State Counsellor Daw Aung San Suu Kyi spoke in support of re-opening schools, saying they could not be closed permanently because of COVID-19.

Nay Min Htet said the fever clinics in Yangon were aware of the notice requiring schools to be handed back to the education ministry by mid-June, but were yet to be officially informed.

“If it’s the first step to re-opening schools,” he said, “we may need to find other venues for the fever clinics.”

TOP PHOTO: A volunteer doctor consults with a patient at the fever clinic in Hlaing Tharyar Township on April 27. (Thuya Zaw | Frontier)