Faces of Yangon: On the waterfront

Their backgrounds are as diverse as their circumstances, but the hard-working food vendors at Botahtaung Jetty have in common the dream of a better life. 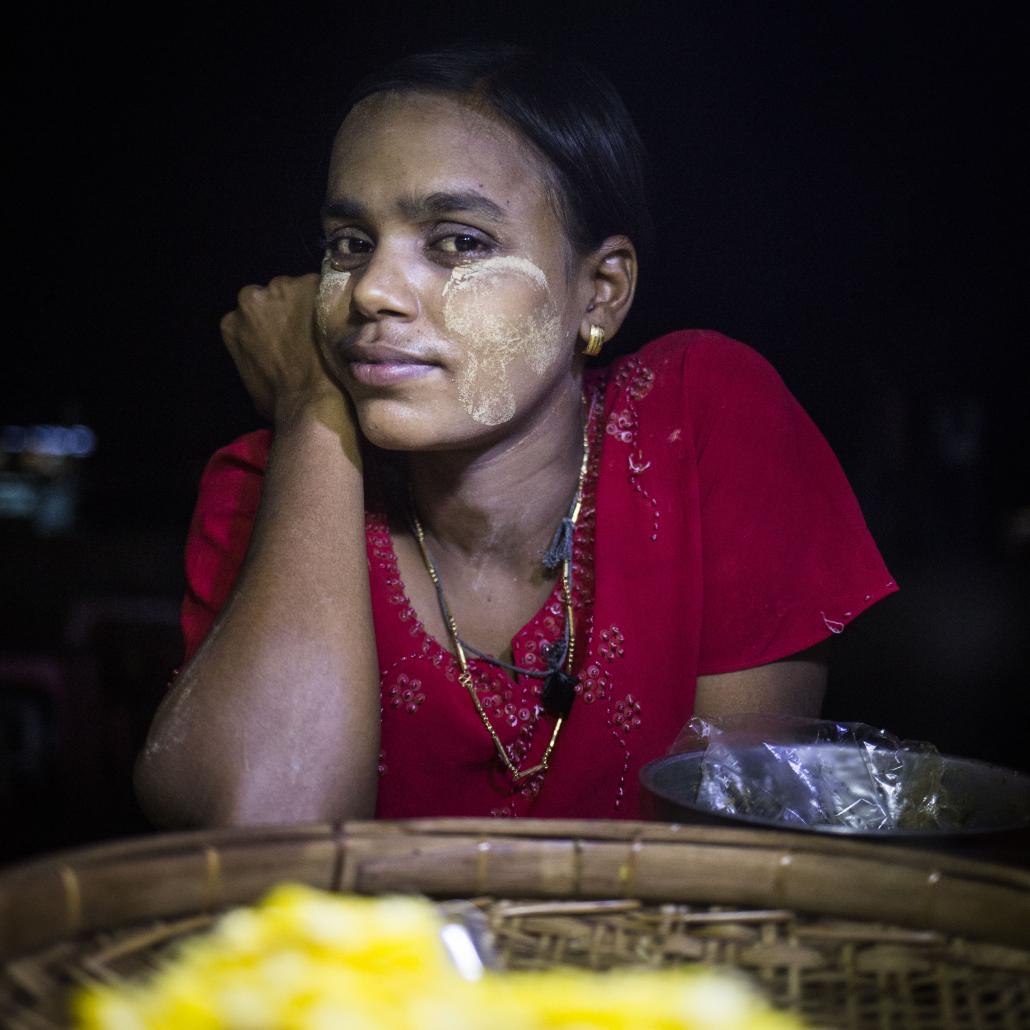 Ma Zin Cho Win’s tea-leaf salad stall was one of the most popular among the dozen or so food vendors’ carts at Botahtaung Jetty in downtown Yangon’s Botahtaung Township.

She likes to chat with customers as she works but her hands are always busy, preparing the ingredients of one of the country’s favourite snacks.

A woman of average height, Ma Zin Cho Win, who was dressed in red and wearing a necklace with a Hindu symbol and thanaka smeared on her face, told of having a series of menial jobs after she married at 16.

Last year, she decided to regain control over her life and established her own business. “I don’t want to work for anyone else,” Ma Zin Cho Win told Frontier. “And if I don’t want to work, I can take a day off,” she said. But the two days she takes off each month are usually devoted to household chores.

Ma Zin Cho Win has no helper. She works a 14-hour day and is always tired, but by the time she heads home after midnight there’s an average of K20,000 in her pocket.

“My husband is out of work,” said Ma Zin Cho Win, adding that he has a drinking problem.

“He hits me, too, but no one in the household stops him,” she said, as tears rolled down her cheeks, shining in the lights on her cart.

Divorce is not an option because she wants her family, which includes two sons, to stay together, and neither is hitting back, because it would make her husband more aggressive. That could lead to intervention by the police, but it would not help the family if her husband was detained for assault.

Ma Zin Cho Win and her family do not have a home of their own. They live with another family in a simple house beside the tracks of Yangon’s circular railway. Ma Zin Cho Win dreams of a better life. “One day I want my own house, with a yard,” she said. 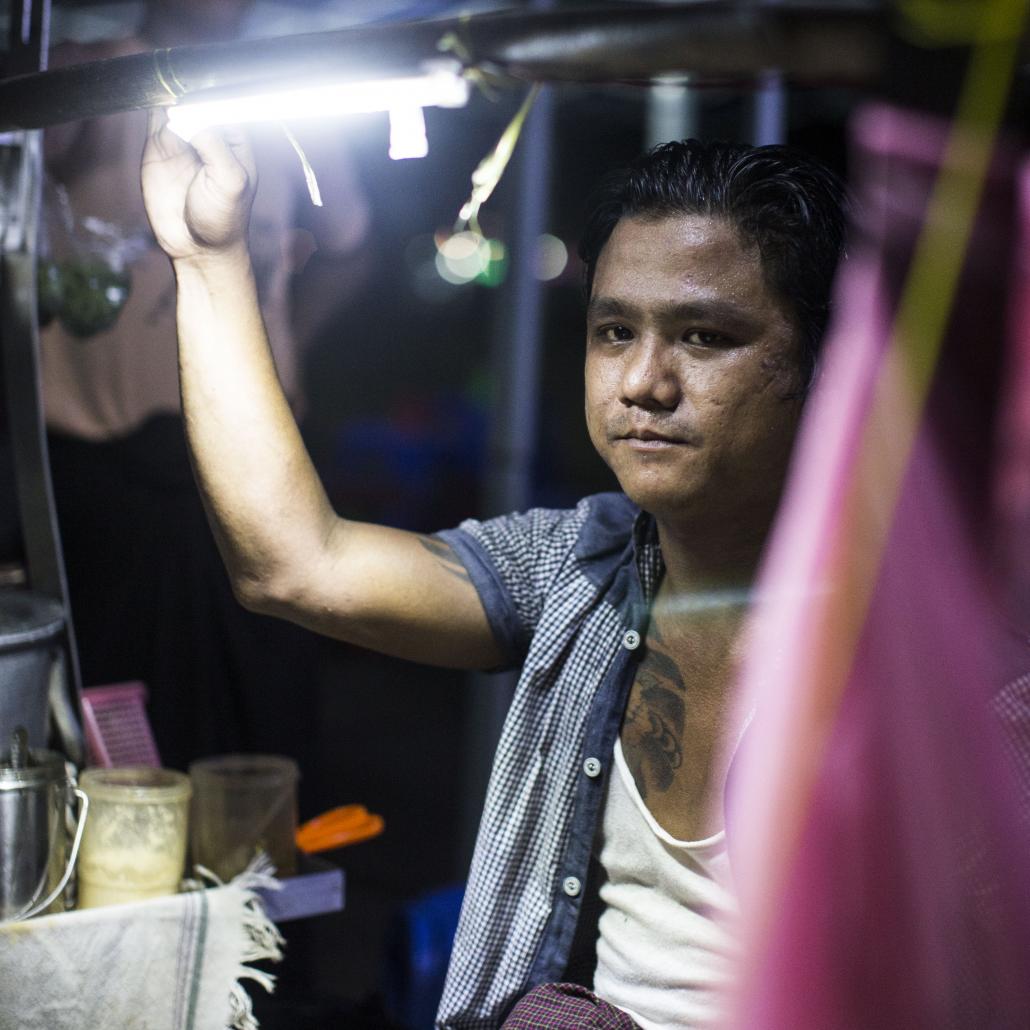 One of the main reasons Ko Nyein Chan enjoys running his noodle business is being able to observe his customers.

Asked about a memorable experience, he recalled a couple’s tiff over a bowl of noodles.

“The couple started arguing while eating noodles at my cart; the situation quickly escalated and the girlfriend was crying so loudly,” he said.

“I said nothing, though,” said Ko Nyein Chan, who has been selling noodles for the past decade. “It’s not my business to interfere in the lives of my customers,” he said.

Ko Nyein Chan sometimes has encounters with poor people, towards whom he shows compassion.

“I also have to deal with customers who eat for free,” he said. “They have no money, so what can I do? I don’t get angry, though, it’s part of life and I see it as helping people in need.”

His noodle cart has baskets on each side, one with various types of noodles and the other containing bottles of sauces and a small, heated vat of soup.

He sits between the baskets, facing his customers and mixes the noodles to order.

Ko Nyein Chan’s goal is to have his own company but he is yet to decide what kind of business to establish.

“I want to get rich, because life with money will be so much easier,” he said. 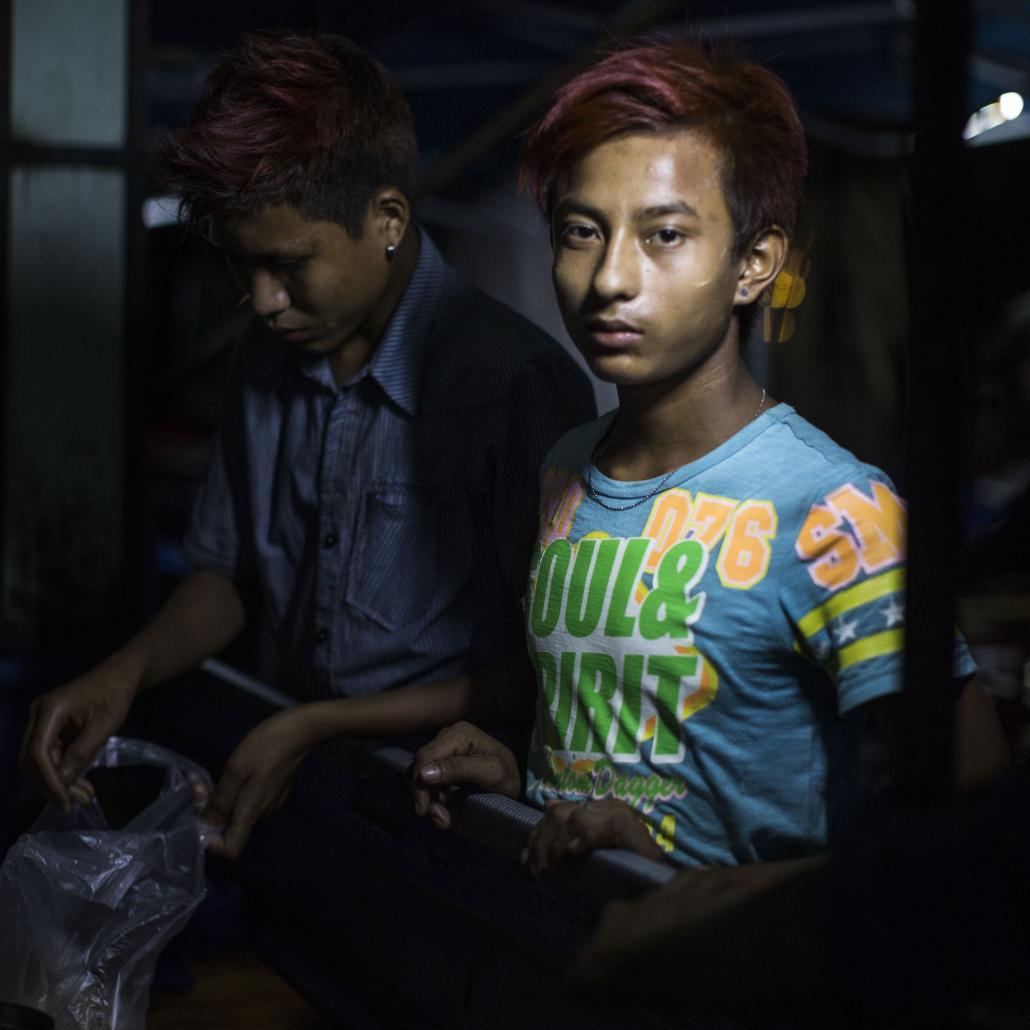 Ko Phyo left Myanmar two years ago and found work in Thailand caring for an elderly couple who lived near Chiang Mai. Asked if he had been apprehensive about leaving Myanmar, Ko Phyo laughed and said it had been exciting to work in another country.

It felt like an adult to be able to earn money and be independent, said Ko Phyo, whose ears are pierced and hair is dyed red.

He returned to Myanmar because he missed his friends, his family and his country. He works with five other teenagers from his hometown as the chef of a food truck at the jetty. Ko Phyo says the best part of the job is living and working with friends. They share clothes, they share a bed and they tease each other for staying up late to call their girlfriends in their hometown.

For Ko Phyo, who has ambitions of going into business on his own, there’s no time now for a girlfriend.

“I’m learning how to be a chef and how to operate a business, and one day I’ll open one of my own,” he said.

When he does have time for a relationship, Ko Phyo said it would not be a Yangon woman. It’s their fashion choices, he said, adding that he disapproves of women wearing shorts or jeans. He can’t stand make-up, either.

Ko Phyo has his heart set on marrying a woman from his hometown, Monywa in Sagaing Region. They are the most beautiful women, he said, and they wear only the traditional htamein and thanaka on their faces. “No girlfriends! It’s all about learning the business,” Ko Phyo said with a laugh, as he dashed off to take orders from customers.