Ethnic politicians and parties will be a big focus of attention in the April 1 by-elections, with some of the most crucial contests shaping up in Rakhine and Shan states.

THE LEADER of the Arakan National Party, Dr Aye Maung, is seeking a comeback to the Pyidaungsu Hluttaw in the April 1 by-election but faces a tough contest in his bid to win the Pyithu Hluttaw seat of Ann in Rakhine State, analysts say.

The performance of candidates in ethnic-based parties will also be a focus of attention in Shan State, where voters in two townships will be casting ballots for the first time in seven years to fill vacancies in a total of six hotly contested electorates.

A total of 95 candidates are competing for three Amyotha Hluttaw and nine Pyithu Hluttaw seats and for seven seats in state and regional assemblies.

The 19 by-elections are being held to fill vacancies caused by the appointment of MPs to cabinet positions or the death of MPs, and in some constituencies where voting was cancelled in November 2015 due to security concerns.

The rumble in Rakhine

Aye Maung, 60, is seeking to fill a vacancy created by the appointment of Union Solidarity and Development Party MP U Thein Swe as Minister for Labour, Immigration and Population in the National League for Democracy government.

In the 2010 election, Aye Maung convincingly won a seat in the Amyotha Hluttaw after defeating four candidates, including one from the USDP.

In 2015, the veteran Rakhine politician miscalculated when he opted to stand for a seat in the state assembly amid speculation he hoped to become chief minister.

Ko Min Min, the chief editor of the Root Investigative Agency, a journalists’ collective based in the Rakhine capital, Sittwe, said Aye Maung believed he lost the election because of plotting within the ANP. 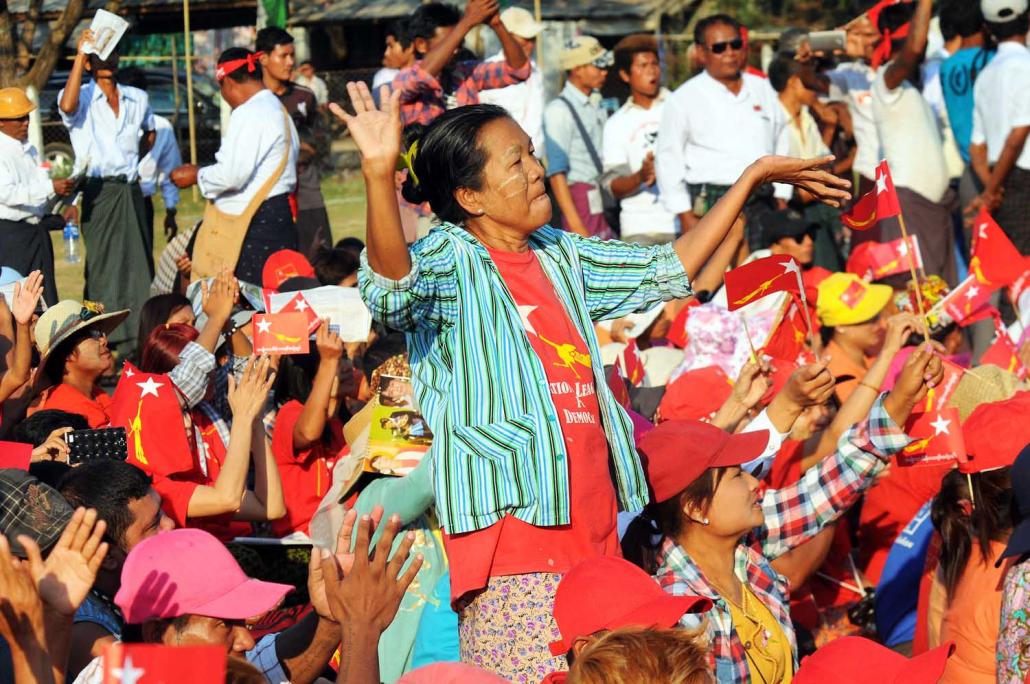 A National League for Democracy supporter dances during a rally in Yangon on March 3. (Steve Tickner | Frontier)

The party was created by a merger in 2014 of the Rakhine Nationalities Development Party headed by Aye Maung and the Arakan League for Democracy, and since last year has been riven by factionalism. Aye Maung’s critics within the ANP say he lost because he did not campaign hard enough.

Min Min said Aye Maung was more popular than the other three candidates in Ann but not being resident in the township was a weakness.

Independent candidate U Zaw Lynn Aung said he was more concerned about his NLD and USDP opponents than Aye Maung.

Aye Maung may have miscalculated when he decided to stand in Ann because Rakhine-based parties have not won a seat in the township in recent elections. The USDP won Ann in 2010 and 2015 and the NLD won the township in the 1990 election that the junta refused to recognise.

Aye Maung told Frontier that winning in Ann would be crucial for the ANP to be successful in the 2020 election.

“It’s like the domino theory. If we won in Ann, we would win automatically in other constituencies,” said Aye Maung, who was sharply critical of the NLD’s decision in March 2016 to appoint one of its members as Rakhine’s chief minister.

The appointment, provided for under the constitution, came despite the ANP’s success in 2015 election when it was the best-performing ethnic party, winning 22 of the 35 elected seats in the Rakhine Hluttaw, just short of an absolute majority, and becoming the third biggest party in the Union Parliament, with 12 seats in the Pyithu Hluttaw and 10 in the Amyotha Hluttaw.

They are among the parties contesting two Pyithu Hluttaw seats and four state assembly seats in Kyethi and Mong Hsu townships, where voting was cancelled in 2015 because of security concerns.

The Shan parties are more popular than the NLD and USDP and will likely do well, said Sai Thiha Kyaw, a Kyethi resident. The SNLD won 24 of the 103 elected seats in the 137-member Shan Hluttaw in 2015 and is the fourth biggest party in the national parliament, with 12 Pyithu Hluttaw (lower house) and three Amyotha Hluttaw (upper house) seats. The SNDP will be aiming to avenge its poor showing in 2015, when it won just one seat.

It may be difficult for the NLD to perform well in the Kyethi and Mong Hsu, partly because residents believe the Union government has been ineffective in halting civil conflict in Shan, said Sai Tun Aung Lwin, a journalist based in the state’s Loilen Township.

Kyethi and Mong Hsu are within the operational area of the Shan State Progress Party, the political wing of the Shan State Army-North. The SNLD has invited diplomats, journalists and civil society groups to observe voting as a precaution against the possibility of the election being disrupted by fighting.

Many of the constituencies in which by-elections are taking place were won by the NLD in its landslide in 2015 but party candidates face a challenge because their leader cannot support their campaign activities.

Daw Aung San Suu Kyi is banned from campaigning under Section 232(k) of the 2008 Constitution, which prohibits government ministers who belong to a political party from participating in party activities while in office.

The NLD campaign has been relatively subdued, with crowds of just a few hundred people attending Yangon rallies led by Pyithu Hluttaw Speaker U Win Myint and party patron U Tin Oo.

The election will provide a limited opportunity to see whether support for the NLD has dipped since it took office, as some observers suspect it has. That may manifest in a lower turnout rather than more votes for alternative candidates, though, because of the perceived lack of a strong opposition party in Bamar-majority areas like Yangon.

The by-elections are also a first test for the USDP after its drubbing in 2015 and the replacement of former president U Thein Sein as party leader.

Under new chair U Than Htay, the USDP has sought increasingly to position itself as an opposition party to the NLD. In parliament it has opposed NLD proposals and activities, while it has also pressured the government on its perceived weaknesses, including security and race and religion.

In November, the USDP and 12 allied parties called on the government to call a meeting of the military-controlled National Defence and Security Council. The joint statement arguing that the NDSC needed to convene because a series of crises, including the attacks in Rakhine State, had put the country’s territorial sovereignty was at stake. 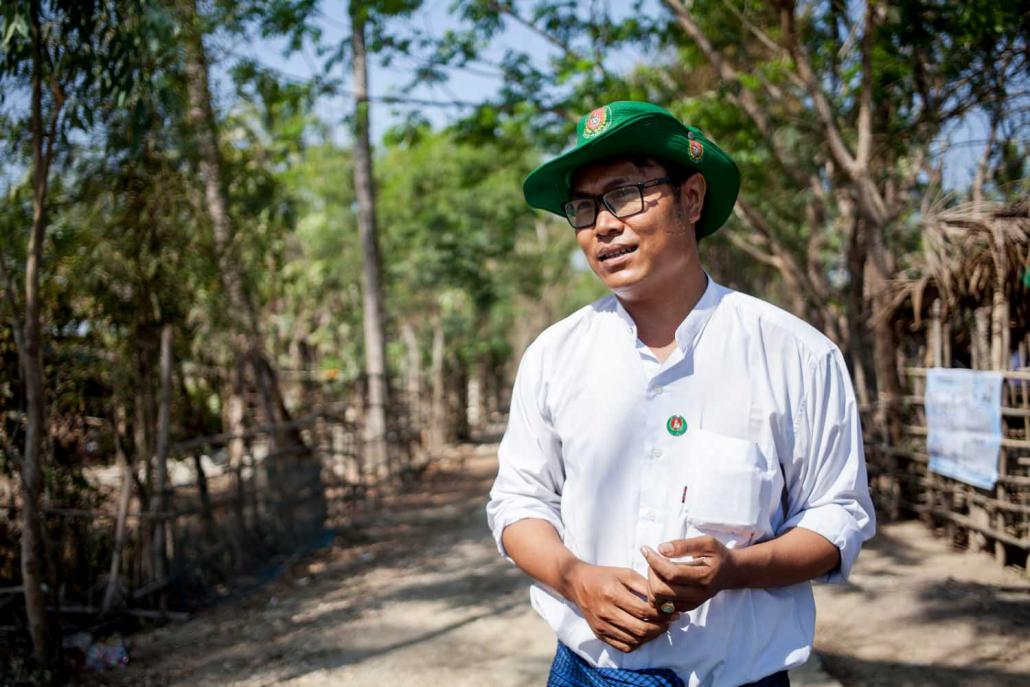 U Kyaw Zin Hein, the USDP candidate in the Yangon Region Pyithu Hluttaw seat of Kawhmu, won in 2015 by Aung San Suu Kyi, said the party was aiming to win all 19 seats.

“We believe that we will win,” he said.

Nine candidates are contesting Kawmhu. Kyaw Zin Hein said the USDP has mounted a carefully planned campaign there because victory in the seat formerly held by Aung San Suu Kyi would give it an important psychological boost ahead of 2020.