A complaint about the tender process for meters has sparked an investigation into corruption at the top of the Ministry of Electricity and Energy.

IT WAS just over a year ago that the Anti-Corruption Commission was praising the minister for electricity and energy for his avowed determination to fight corruption.

Minister U Win Khaing and deputy minister Dr Tun Naing were among 250 officials at a seminar held by the MOEE in Nay Pyi Taw on July 18, 2018, to raise awareness about tackling graft. Also at the seminar was ACC member U Han Nyunt.

“Minister U Win Khaing told the seminar that corruption was the main barrier to national development,” recalled a ministry official, who asked not to be named because he is not authorised to speak to the media.

“The minister said he would never tolerate corruption,” the official told Frontier in a phone interview late last month, adding that the ACC had been pleased by Win Khaing’s apparent commitment.

But then last month the ACC began investigating senior officials at the ministry, including Win Khaing, who has been on medical leave since late June, and his deputy Tun Naing.

On July 10, in response to a letter it received from the ACC the previous day, the Central Bank of Myanmar wrote to private banks seeking information about the accounts of Win Khaing, his wife Daw Hla Hla Mu, Tun Naing, and his wife, Daw Thin Thin Maw. The CBM asked that the banks provide the information within three working days.

In early August, ministry sources confirmed that the minister had resumed his work at the ministry in Nay Pyi Taw.

“It seems there is nothing wrong with their bank accounts because it has already been more than three weeks since the ACC checked the bank accounts,” said the official. 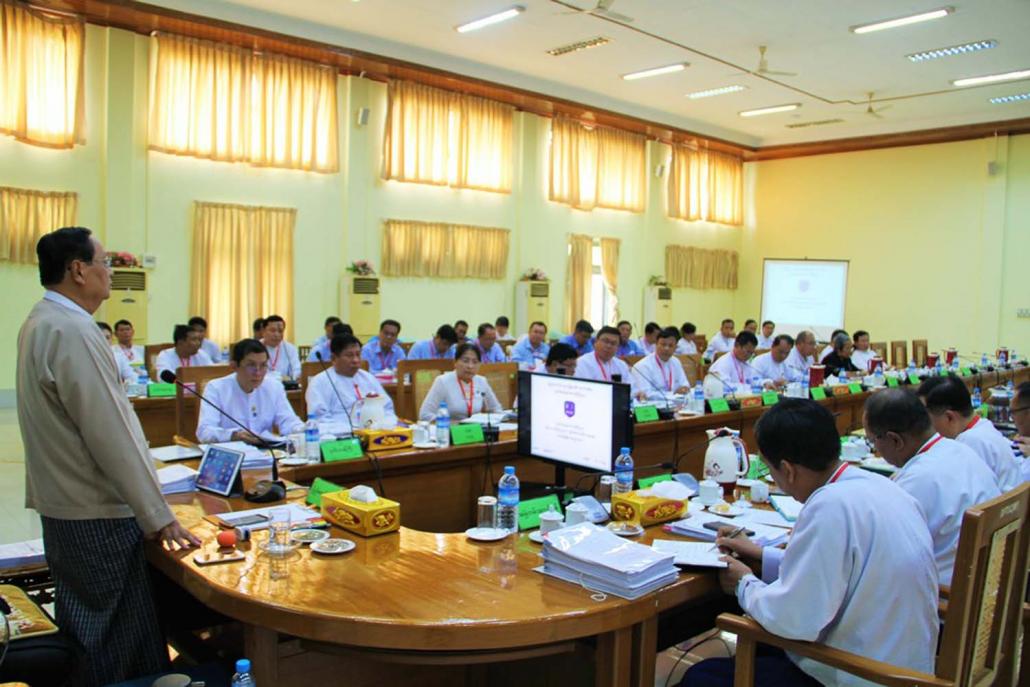 Minister for Electricity and Energy U Win Khaing leads a meeting at the ministry on August 7, two days after returning to work following a period of medical leave. (MOEE Facebook)

The revelation that senior officials in the ministry are under investigation has sparked confusion – and widespread speculation – as to the subject of the complaint.

The ministry official told Frontier that one of the complaints being investigated “involves the tender process for buying digital electricity meters”.

U Myo Aung, the managing director of Ever Meter Co, a large manufacturer of electricity meters, confirmed to Frontier that the company submitted a complaint to the ACC in March 2018, alleging that a tender it participated in had been highly irregular.

Kyaw Soe confirmed to Frontier in late July that the commission had received complaints about MOEE’s tender processes, but declined to comment on the allegations or its investigation.

An assistant secretary at the ministry’s information department, U Aung Kyaw Htoo, told Frontier on August 5 that he could not comment while the investigation was in progress.

He did confirm that minister Win Khaing had resumed duties on August 5 after being on medical leave for about two months.

One private sector executive who is close to the MOEE believes that the corruption investigation involves much more than tenders to buy meters.

The executive, who asked not to be named because of the sensitivity of the matter, dismissed suggestions by Ever that it was responsible for launching the corruption investigation.

“As far as we know the investigation was launched because of a complaint to the ACC that involves billions of dollars,” she said, without elaborating.

One possible focus of the investigation is the ministry’s decision to award notices to proceed to four gas-powered electricity generation projects worth around US$5 billion in early 2018. While no contracts are believed to have been signed for the projects, the decision to issue the notices to proceed was sharply criticised at the time by an opposition lawmaker, who claimed it had violated the instructions of the President’s Office because the ministry had not called a tender.

U Maung Myint (Union Solidarity and Development Party, Mingin, Pyithu Hluttaw) also told parliament in June 2018 that he had heard one of the companies involved, Supreme Group, had employed the wife of former minister for finance and planning U Kyaw Win and also worked with United Engineering, a company owned by Win Khaing.

There has been further disquiet within the industry over the recent announcement of a tender to supply 1,040 megawatts of emergency power in time for next year’s hot season. The Electric Power Generation Enterprise announced the tender in late June with a July 29 deadline, and site visits took place on July 6 and 7. Observers have commented that only companies with inside knowledge of the tender would have had time to prepare a bid in that timeframe. 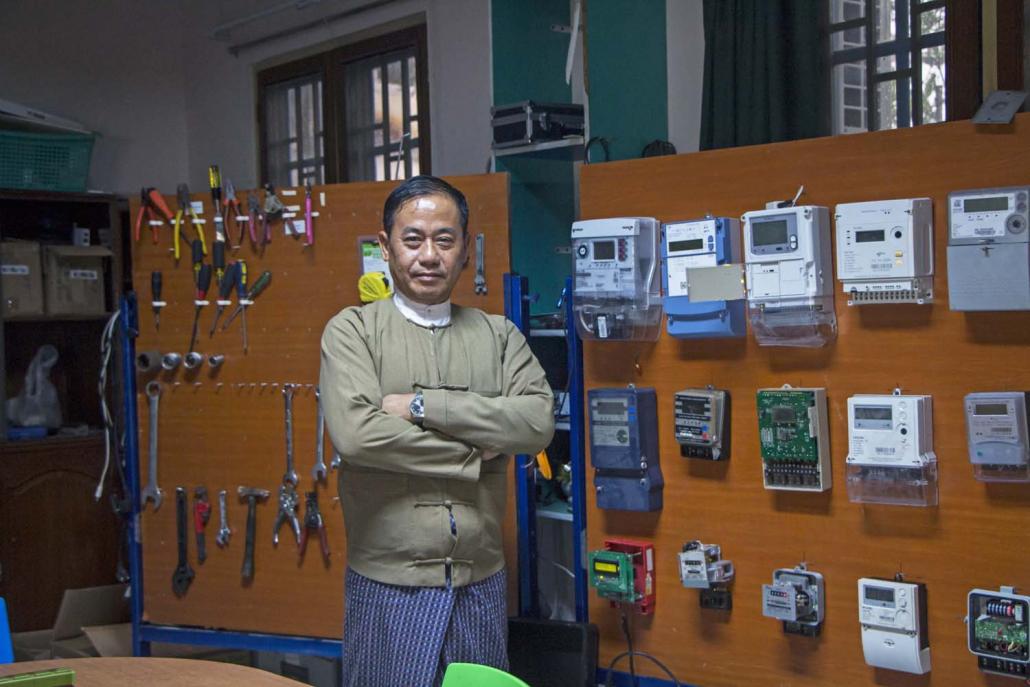 Ever Meter and ESE

The ministry official said Yangon-based Ever Meter had complained to the ACC after unsuccessfully bidding in three rounds of tenders, one in 2016 and two in 2017, to supply digital meters to the Electricity Supply Enterprise.

The official said the complaint had mentioned that ESE deputy chief engineer U Aung Kyaw Htoo attended a football match in England as a guest of U Thet San, managing director of Alpha Power Engineering Co Ltd, one of two companies selected to supply meters to ESE.

Myo Aung from Ever Meter said his company won two tenders, in 2016 and 2017, to supply digital meters to ESE but the results were later cancelled by the ministry ­– decisions that he described as “weird”.

“They said they hadn’t set the specifications for the meters,” he told Frontier on August 2. “The cancellation of the first tender came about a month after U Tun Naing was appointed deputy minister in 2016.”

On January 18, 2018, it was announced that Yangon-based Alpha Power and Junction River Trading Co Ltd, based in Muse, Shan State, were both awarded contracts to supply ESE with four kinds of digital meters, for city, town, village and business use.

The following day, Junction River signed a contract with ESE worth K14.6 billion, while Alpha Power’s contract was for K1.28 billion.

Alpha Power has denied any impropriety over Aung Kyaw Htoo’s trip, saying it had nothing to do with the ESE department that is responsible for meter installation.

“U Aung Kyaw Htoo was not even a member of the tender committee, and the trip was in accordance with one of the tender pre-conditions of the DPTSC,” Alpha Power said in a video posted on Facebook on July 29, referring to the Department of Power Transmission and System Control.

According to Alpha Power, it was a condition of the tender that the winning bidders take ministry officials to visit their manufacturing facilities. The company said that following the award of the tender the ministry had selected three officials to visit the factory in the British city of Bristol that supplies Alpha Power with meters and attend a training programme there.

Deputy minister Tun Naing, and ESE deputy chief engineers Thura Aung Bo and Aung Kyaw Htoo, who were all named in Ever Meter’s complaint, could not be reached for comment.

But Ever Meter’s decision to complain to the ACC about the tender was supported by U Myint Zaw, president of Myanmar Electrical and Electronic Association. When the ACC appeared to not be acting on Myo Aung’s complaint, Myint Zaw submitted one in July to the commission as well as other institutions, such as the Pyidaungsu Hluttaw and the President’s Office.

“We discovered that the technical specifications of the meters submitted by the tender winning companies are a bit different from the requirements specified in the tender,” said Myint Zaw. “The process was not fair and there was no level playing field.” 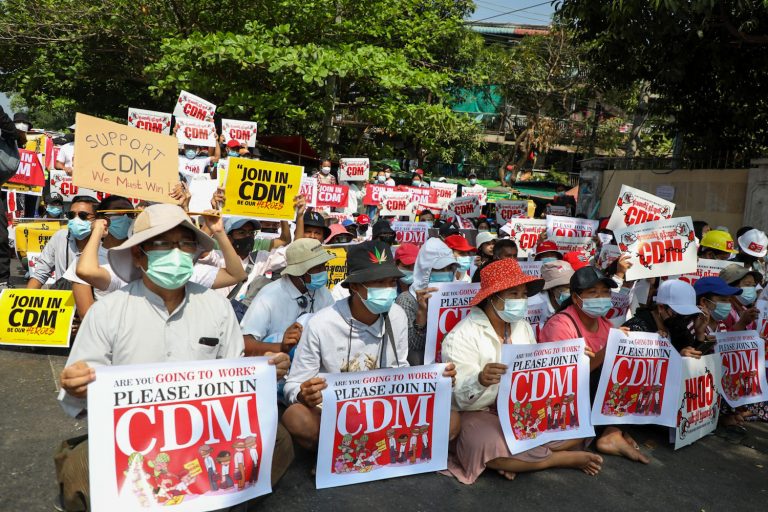 A new Central Bank deputy governor has lashed out at protesters and bank staff who have joined the Civil Disobedience Movement and forced private banks to close their branches, and claimed the military regime is “doing its best” and should be given more time.
BY Frontier