Dramatic arrests in Yangon of four suspects in Mrauk U killing

In the same week that the Rakhine assembly launched an investigation of last month’s violence in the ancient city, four suspects in the killing of the former Mrauk U administrator have been arrested in Yangon.

THE METTA Gon Yee nunnery is located down a dusty, unmade road in Letyetsan village, Thanlyin Township, on the outskirts of Yangon.

It gets few visitors, and until last week was almost entirely unknown by anybody who didn’t live in its immediate vicinity. But on February 1, the Ministry of Foreign Affairs mentioned the nunnery on a post on its Facebook page. The post said that three suspects in the killing of an administrator in Rakhine State two days previously had been arrested there on January 31.

U Bobo Min Theik, who had been township administrator for Mrauk U, was found stabbed to death on a roadside in neighbouring Ponnagyun Township on January 30.

The suspects were all from the same family. U Kyaw Myint, 48, his wife Daw Kyi Kyi Win, 47, and the couple’s daughter-in-law Ma Khaing Zar Hlaing, 20, were arrested at the nunnery. The couple’s son, Ko Min Than Htay, 20, was arrested earlier the same day in Yangon’s Mayangone Township, the Facebook post said.

The nunnery’s abbess, a 71-year-old nun originally from Mrauk U who had lived at the nunnery for the past 12 years, refused to be interviewed, citing the fact that she was deaf.

A group of nuns who had been staying at the nunnery for the last few days as part of a religious ceremony eventually agreed to speak to Frontier on the condition of anonymity.

The nuns said that the suspects had arrived at the nunnery unexpectedly on the afternoon of January 31. They had immediately sought out the abbess to pay a donation of K30,000, the nuns said. 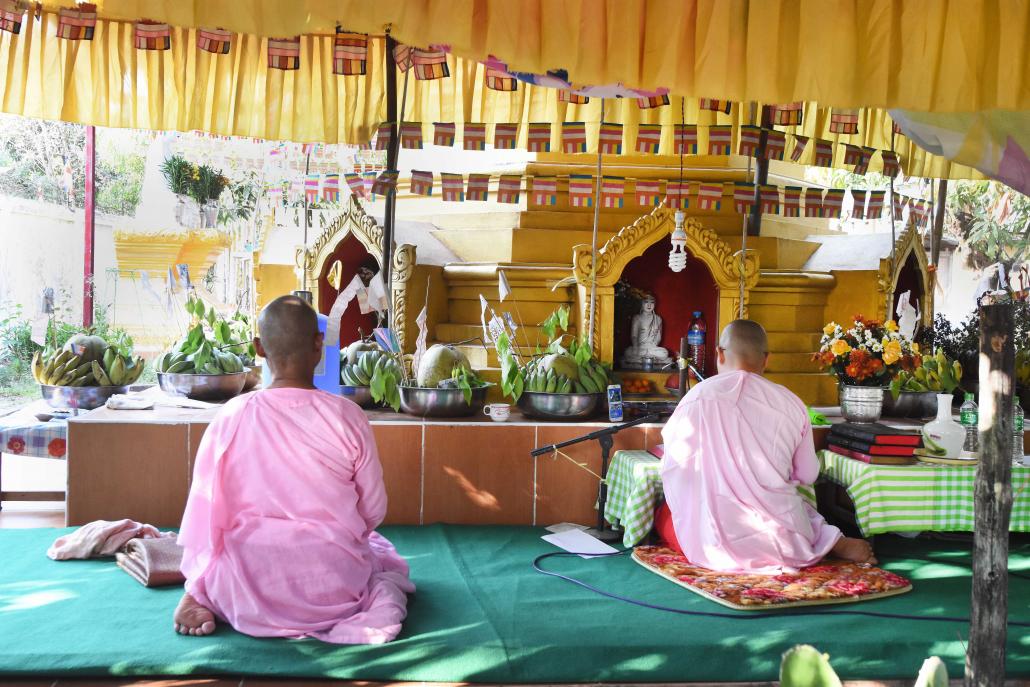 The abbess knew nothing about the suspects’ suspected crime when they arrived, but she had clearly been affected by her encounter with them, they said.

“She told us that even though she was doing a good deed, their sin has impacted her and she has damaged the dignity of her nunnery. She can’t even talk about it,” said one of the nuns.

U Maung Ngay, 65, a household leader at Letyetsan who lives next to the nunnery, told Frontier he had witnessed the arrests.

“At first, I didn’t notice there were police here because of the [religious event],” Maung Ngay said. “Then we saw two police inspecting the car [in the afternoon].”

Later that evening, shortly after 8pm, about half a dozen police cars arrived at the compound and arrested the suspects, Maung Ngay said.

“The [abbess] was frightened by what happened,” he said, adding that police had returned to the nunnery the following day, where they found a handgun, nine bullets, three cheque books and K75 million in cash hidden in a handbag.

The details around the arrests remain unclear, and at the time of going to print police had refused to answer Frontier’s questions related to the case.

According to a statement issued by the President’s Office on January 31, the vehicle in which Bobo Min Theik’s body was found was reported stolen by Kyaw Myint. Kyaw Myint’s two sons and another man were in the car at the time of the accident and fled on foot, the report said, adding that shortly after the incident two men arrived by motorbike and set the car on fire before fleeing.

Bobo Min Theik was township administrator at Mrauk U when the town was hit by violence on January 16. Residents had planned to commemorate the 233rd anniversary of the fall of the Rakhine empire, which had its capital at Mrauk U, but the event was cancelled by authorities shortly before it was due to begin.

Protesters took to the street to protest the decision, and police shot into the crowd, killing at least eight people.

On January 29, the Rakhine State parliament formed a committee tasked with investigating the Mrauk U incident.

The committee is comprised of nine members, including five lawmakers from the Arakan National Party, and one each from the National League for Democracy and the Union Solidarity and Development Party.

U Mya Than, deputy spokesperson for the state hluttaw, told Frontier on February 1 that the committee would establish who had ordered the police officers to open fire, and whether the operation was conducted legally.

Rakhine State Chief Minister U Nyi Pu has said he will resign from his role if the investigation found he committed any wrongdoing, said Mya Than.

The committee is expected to complete its investigation within 30 days, after which it will submit its findings to the state parliament.

“Based on that, we will see if the chief minister keeps his promise,” said Mya Than, adding that much “sorrow” could have been avoided if authorities had made the decision to cancel the Mrauk U event earlier. 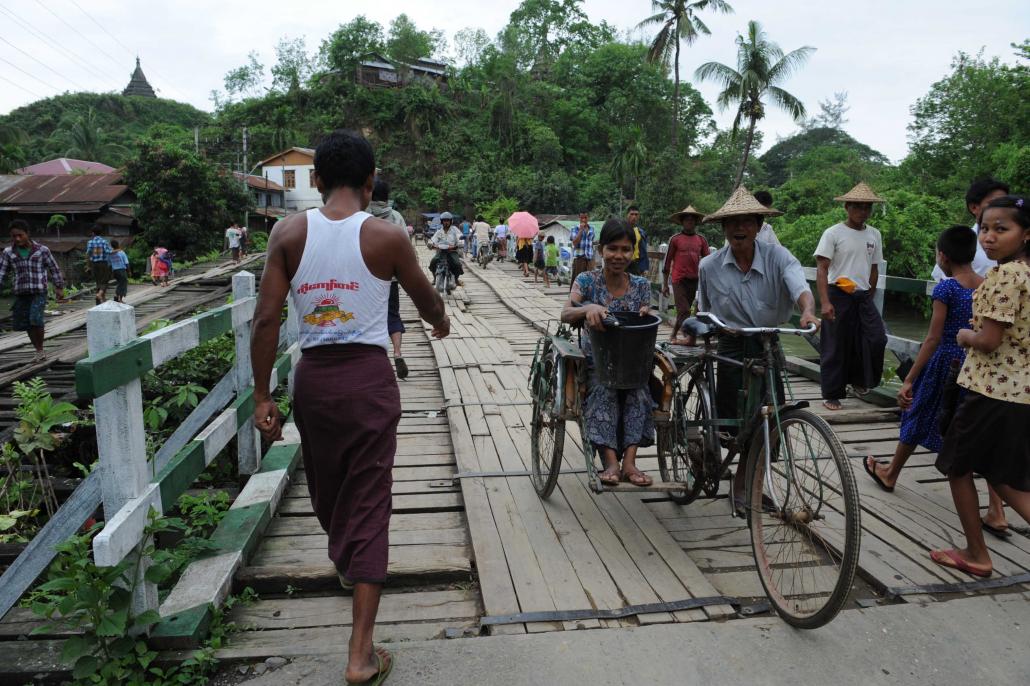 The town of Mrauk U was hit by tragedy in mid-January when security forces fired on protesters who were angry that the authorities had cancelled an event. (Steve Tickner | Frontier)

U Tin Maung Shwe, secretary of the state government, said the Rakhine hluttaw had made the decision to ban the ceremony, and therefore must take responsibility.

On January 23, eight people arrested in the incident and receiving treatment at Sittwe Hospital were arrested and transferred to a prison hospital. They are reportedly being held at Sittwe Prison, charged with destroying public property.

Ma Than Soe’s younger brother Maung Kyaw Min Soe, 17, was one of those arrested. She told Frontier that her brother had been studying at school but had to drop out in 2016 because the family faced financial difficulties.

“My brother does not have a [National Registration] card because he is not an adult yet, but when police filed the [charges], they said he had an [NRC],” she said. “When [the protesters] were brought to jail, no one’s injuries had been healed, so they will face difficulties there.”

U Tun Aung Kyaw, a secretary for the ANP, said that some of those arrested had suffered multiple injuries and were receiving sub-standard treatment in the prison hospital. He said he hoped that the committee would establish the truth about what happened at Mrauk U.

“But the complexity of this case, including the death of the former township administrator, has hindered the committee’s ability to begin the investigation,” he said.