Myanmar has one of the highest rates of diabetes in Southeast Asia and specialists are urging healthy diets and regular exercise to tackle the problem.

“The doctor told me I should exercise regularly, but I don’t want to do that,” said U Aung Kyaw Oo, fixing Frontier with a mischievous grin. In August last year the 50-year-old was diagnosed with Type 2 diabetes after a routine medical check-up.

Although he ignored his doctor’s advice about exercising, Aung Kyaw Oo is being more careful about his diet. He no longer eats food that is too sweet or consumes fizzy drinks, and has stopped smoking.

He also takes his medicine – metformin – twice a day.

“It was an early diagnosis, so my doctor told me that if I watch my diet and take my medicine regularly, then I should improve,” he said. 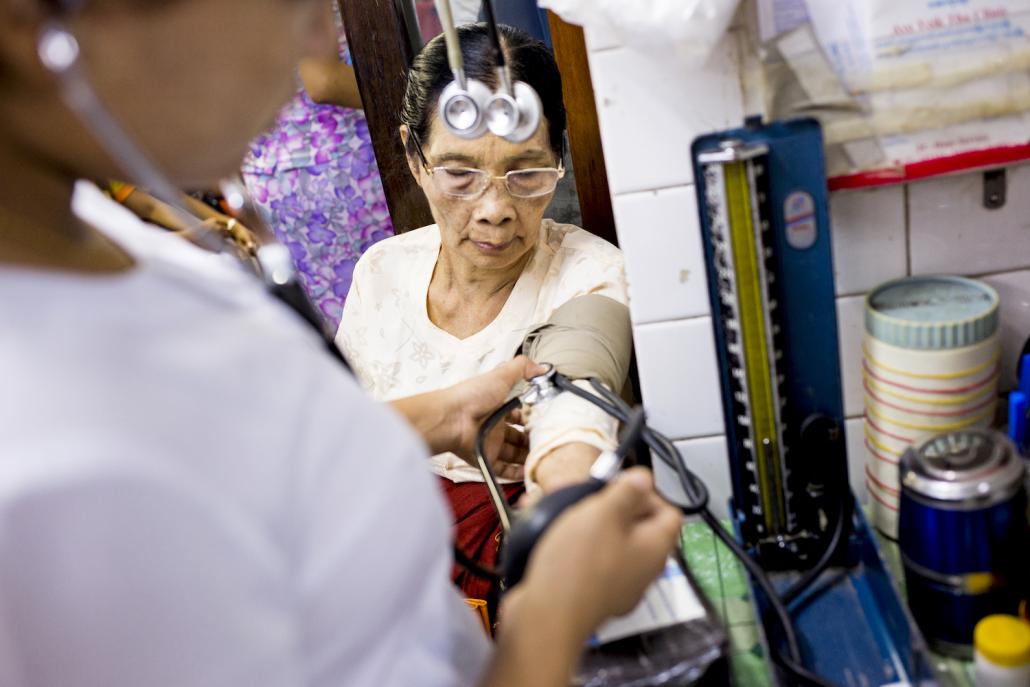 A patient is seen to by a doctor at Aye Yeik Tha Clinic in Yangon’s Pabedan Township. (Ann Wang / Frontier)

Alarm bells about diabetes in Myanmar rang in 2014 when the World Health Organization, in collaboration with the World Diabetes Foundation and the Ministry of Health, conducted a study of non-communicable diseases. It found that the prevalence in Myanmar of raised blood glucose – a general indicator of diabetes – was 10.5 percent, or more than five million people.

The average prevalence rate in the 11 countries covered by the WHO’s Southeast Asia regional office is 8.6 percent and the worldwide average is 8.5 percent. 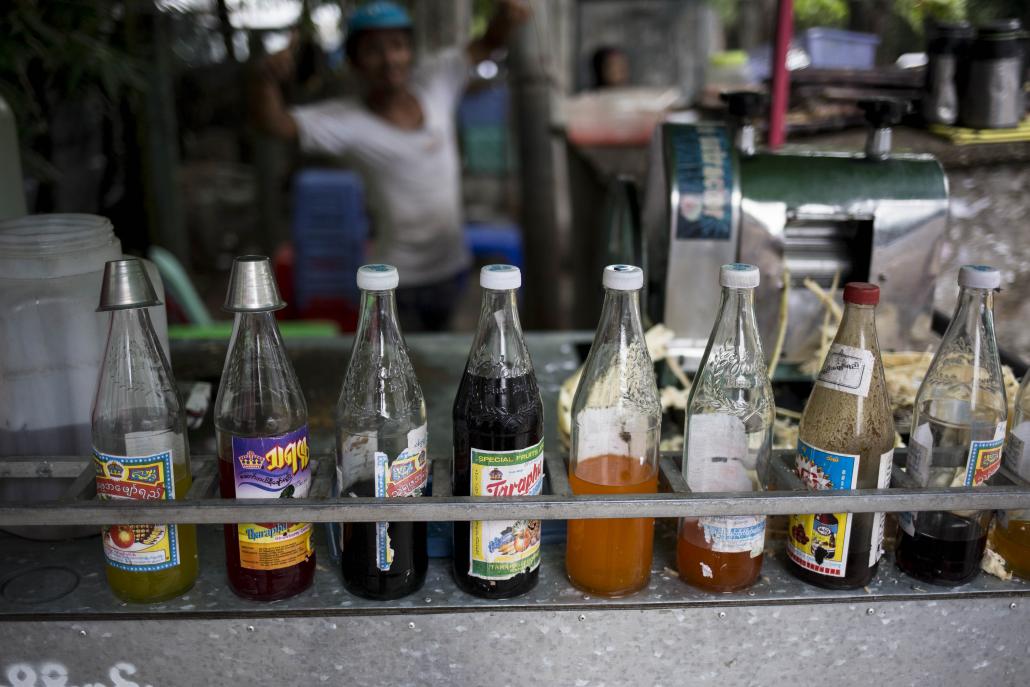 Type 2 occurs in about 90 percent of all diabetes cases worldwide, with the other 10 percent being Type 1, a WHO spokesperson told Frontier.

“Type 2 diabetes develops either when the pancreas produces inadequate amounts of insulin, or when the body does not effectively use the insulin it produces. Type 2 diabetes is more common in people who are overweight or obese,” the spokesperson said.

About 95 percent of the diabetes patients in Myanmar are Type 2, said Dr Ko Ko, head of the Department of Diabetes and Endocrinology at the University of Medicine 2 at Yangon’s North Okkalapa Hospital. The department was the first specialty diabetes centre in Myanmar when it opened in 2012. Another two have since opened, at the University of Medicine 1 at Yangon General Hospital, and at Mandalay.

Referring to the 10.5 percent prevalence rate detected in 2014, Ko Ko said it had increased from about six percent in 2003.

“It is growing quickly,” he said, adding that one of the main reasons for the increase is a change in diet.

“People living in villages are coming to cities and their diets are changing. People have more cholesterol in their diet now. They are eating more fast food and drinking fizzy drinks – especially young people – so this is a major challenge,” he said.

Dr Than Than Aye, a diabetes and endocrinology specialist at Yangon’s Bahosi Hospital, agrees that while changing diets are part of the problem, traditional diets are also having an impact.

“Of course things such as fast food and fizzy drinks are contributing, but we are seeing [an increase in diabetes] in rural areas, too,” said Than Than Aye. “These people do not have access to fast food, but they are still at risk because they do not have enough protein in their diet,” she said, adding that rice, fish sauce and fruit are high in sugar or salt.

But diet is not the only factor.

Aung Kyaw Oo is not alone in spurning exercise. The WHO survey found that 16 percent of the population does not engage in the recommended amount physical activity. With almost no spending on sport and a dearth of public spaces for exercising, this is hardly surprising.

“Type 2 diabetes usually occurs after the age of 40,” the WHO spokesperson said. “Groups most at risk of developing diabetes are adults who are overweight or obese, physically inactive and who consume alcohol and tobacco products, as well as those with a family history of diabetes.” 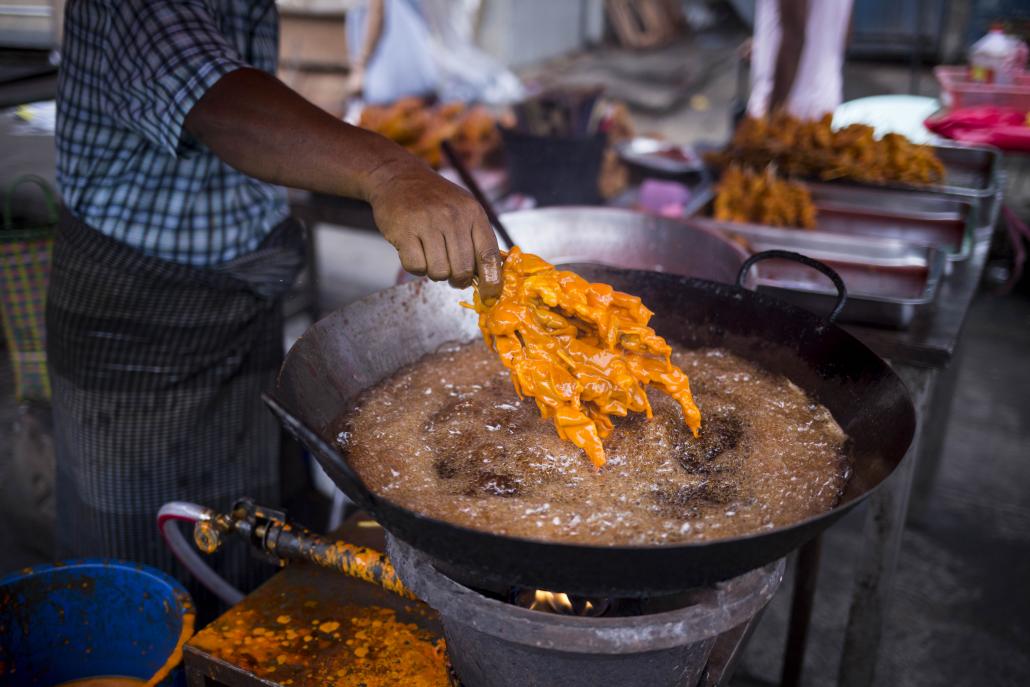 Fried chicken is cooked by a vendor in downtown Yangon. (Ann Wang / Frontier)

A 2016 WHO diabetes profile for Myanmar said the disease accounts for 3 percent of deaths, a figure that Ko Ko says is misleading.

“There are many complications from diabetes, including blindness, strokes, heart attacks, amputation of limbs and kidney failure. So the amount of direct deaths from diabetes seems low, but it is a hidden disease. There are very serious impacts from diabetes,” he said.

During the decades of military rule, health spending was not a priority.

There are indications the new government will devote more attention to tackling diabetes and other health issues.

“The new health minister [Dr Myint Htwe] is talking very seriously about diabetes and cardiovascular diseases in the country,” said Ko Ko. The WHO spokesperson said Myanmar’s health sector “is undergoing many positive developments and transformations,” and that diabetes has been highlighted as a public health concern by the government.

In 2014, Myanmar launched the PEN – Prevention and Control of Non-communicable Diseases – program, in two Yangon Region townships, Hmawbi and Hlegu. The program involves testing for non-communicable diseases such as diabetes, cardiovascular diseases and cancer. Ko Ko said it was planned to implement the program in the country’s 330 townships in five years. 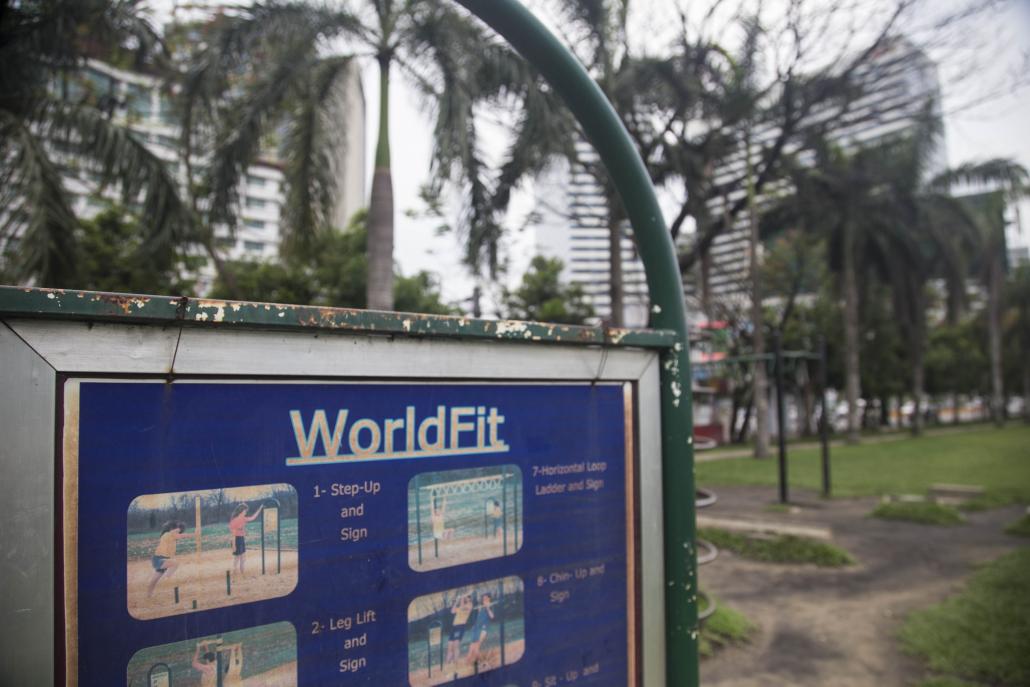 A big challenge for tackling diabetes in Myanmar is a lack of knowledge about the disease, said the WHO spokesperson.

“Many people might not know that they have diabetes,” she said. “Symptoms – which can include foggy or blurry vision, increased tiredness and hunger, more frequent urination and increased thirst, among others – are often ignored for a long time. Early detection is of the utmost importance to living a healthy life,” the spokesperson said.

Than Than agreed, saying early detection was much cheaper than treatment, which is often long-term and costly.

Ko Ko said events such as World Diabetes Day, marked each year on November 14, and government support for national campaigns, had helped to raise awareness about the disease.

The specialist believes the next step should be mandatory testing for anyone aged 40 and over.

“Can we prevent diabetes? Yes,” Ko Ko said. “It is caused by the genes and the environment. The genes, we cannot control but the environment we can. We can inform people that if they do not exercise, if they have a poor diet, if they continually drink fizzy drinks, then they will be more at risk. We need to push people to change their behaviour.”