The archaeological treasures on the plain of Bagan have suffered many kinds of damage over the centuries, including being defaced by visitors behaving like vandals.

KO THAN Htike, a sand-painting artist in Bagan, once found inspiration for his work in a mural in one of the archaeological zone’s thousands of Buddhist temples and pagodas.

The mural depicted a woman playing a harp on top of an elephant while 10 women danced around the animal. The mural, possibly from the golden age of Bagan, between the 9th and 13th centuries, or perhaps added later, was a popular source of inspiration for many of the artists in the area who work with coloured sand.

“When I went to look at it again, I found it had been destroyed,” said Than Htike, who sells his creations outside Bagan’s 11th century Abeyadana Temple. “Someone had scratched it with a piece of metal; it was heart-breaking.”

The temples at Bagan have suffered various kinds of damage and destruction in the past 1,000 years, including an earthquake in 1975 and renovation projects during junta rule that were criticised for not respecting the architectural integrity of the ancient sites.

Disrespectful, unscrupulous or ignorant visitors have also damaged temples, such as by stealing bricks, and the condition of the buildings has also deteriorated over the centuries because of the harsh climate of the central dry zone.

Archaeologists from the Ministry of Religious Affairs and Culture say Bagan has 3,122 temples and pagodas, of which about 400 have murals. 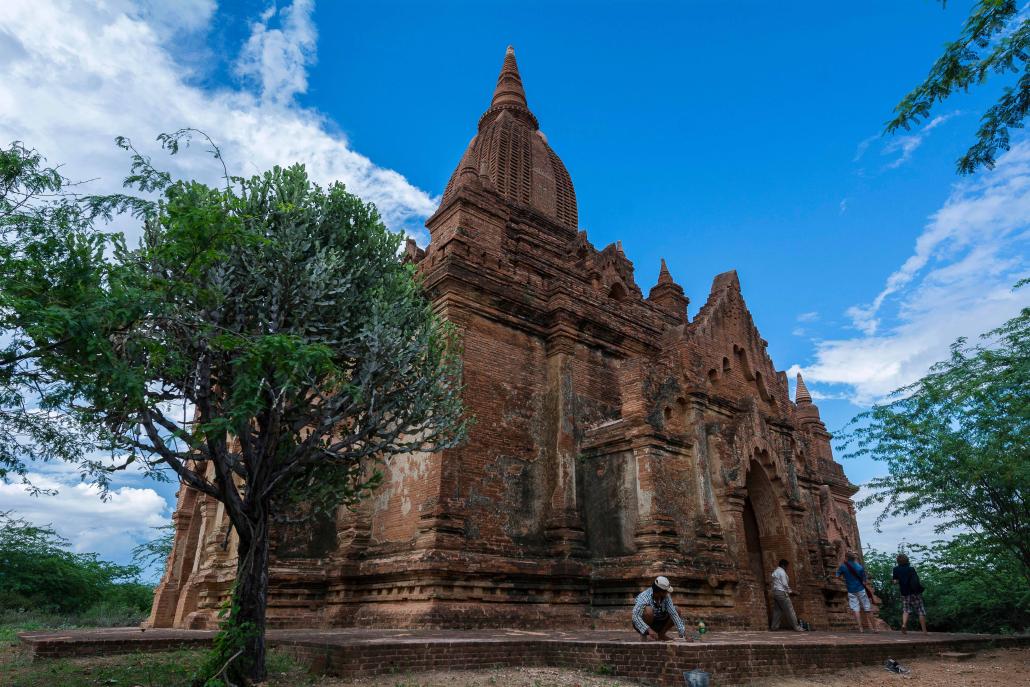 Dr Than Htun, a renowned historian who died in 2005, wrote in Wave Magazine the year before he died that the murals mainly depict scenes from the life of the Buddha or from the Jataka tales about his previous lives.

Than Htun wrote that a German had looted beautiful murals from the Wetkyi-in Gubyaukgyi and Theinmazi temples in the 1890s and they were later sold to the Museum of Ethnology in Hamburg. 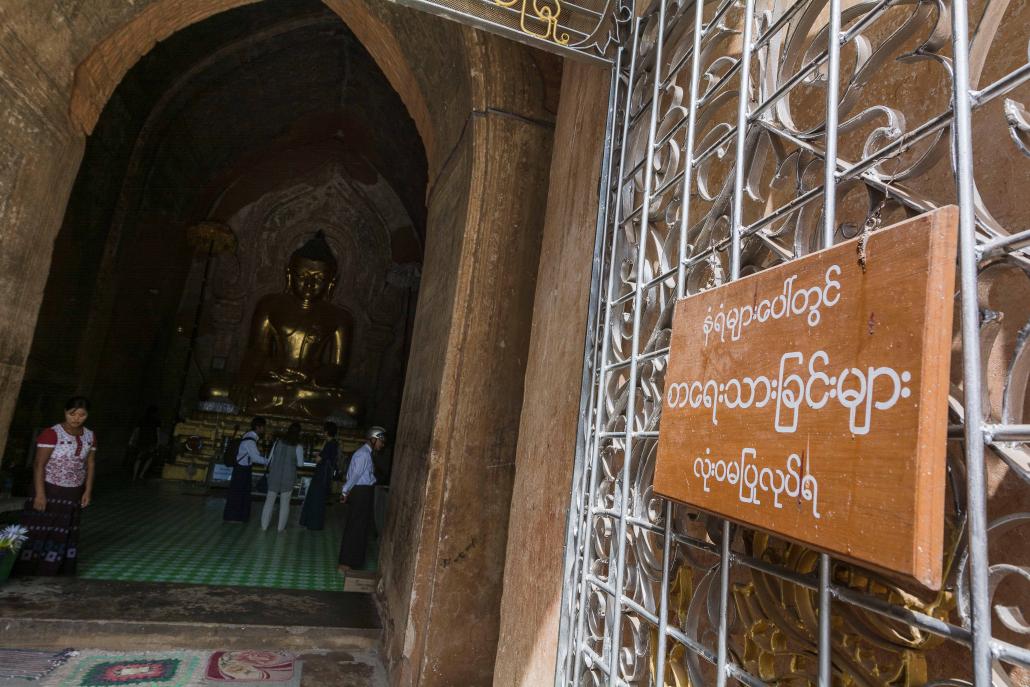 Another human threat to the temples and their art is graffiti. Visitors, many of them lovers, leave messages on temple walls. A recent visitor to the Wetkyi-in Gubyaukgyi wrote, “Aung, what is love?”

“When the tourists saw that, they were disgusted,” said tour guide U Zaw Win Cho.

Graffiti mars the appearance of dozens of temples. As well as being in Myanmar, there is also graffiti in Thai, Japanese, Chinese and English. 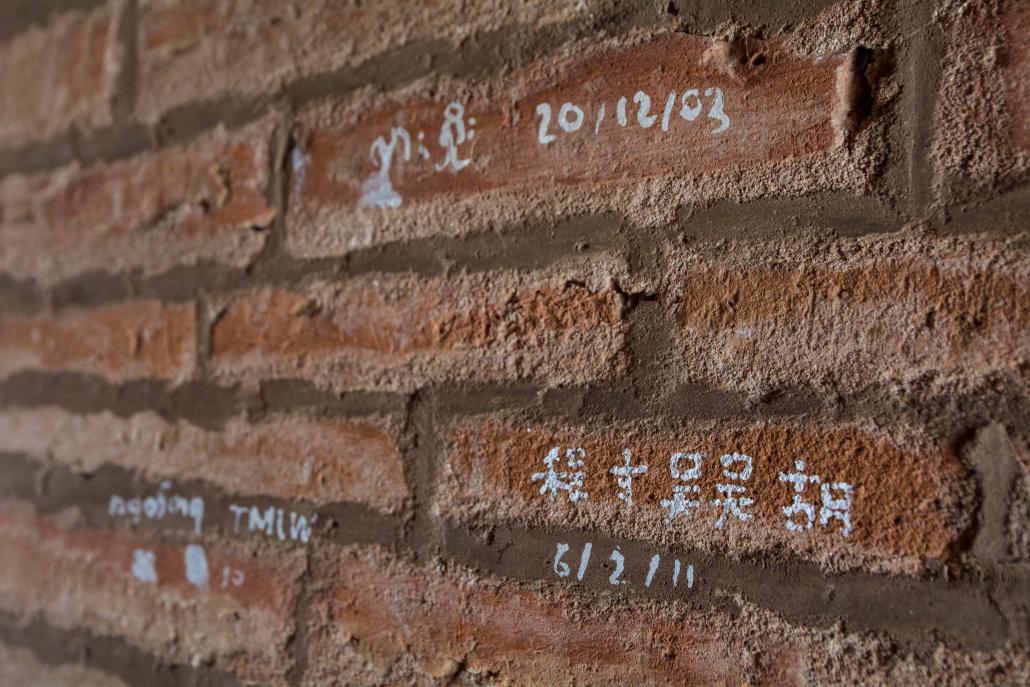 Staff from the Department of Archaeology, under the Ministry of Religious Affairs and Culture, said they often receive rude responses when they catch people writing graffiti.

“When we try to stop people from scribbling on the wall, people talk to us rudely,” a temple guard at Bagan told Frontier, on condition of anonymity.

The department did not respond to an emailed request for comment. 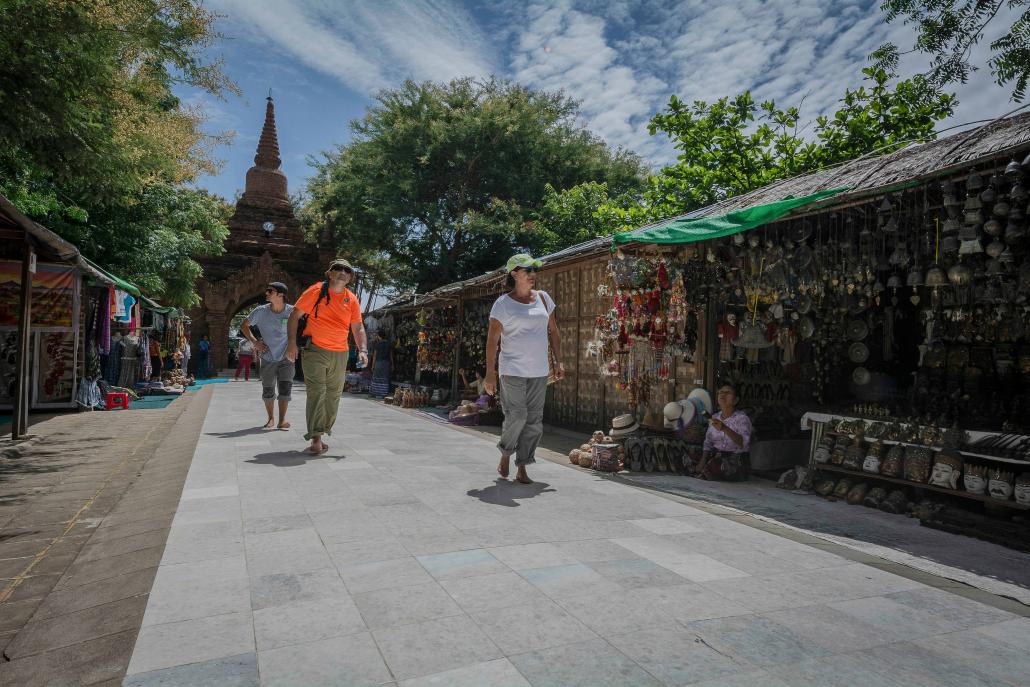 Under the Law on the Preservation and Protection of Ancient Buildings, enacted in 2015, it is an offence to damage archaeological structures or materials. The maximum penalty is seven years’ imprisonment and a fine of K5 million.

The temple-studded plain at Bagan covers about 40 square kilometres, making it impossible to closely monitor all of its archaeological sites. Educating people about the benefits of preserving their cultural heritage is the only sustainable approach to protecting the site’s treasures.

The government has been trying to have Bagan listed as the UNESCO World Heritage Site for two years, but many challenges remain, of which damage caused by visitors is one. 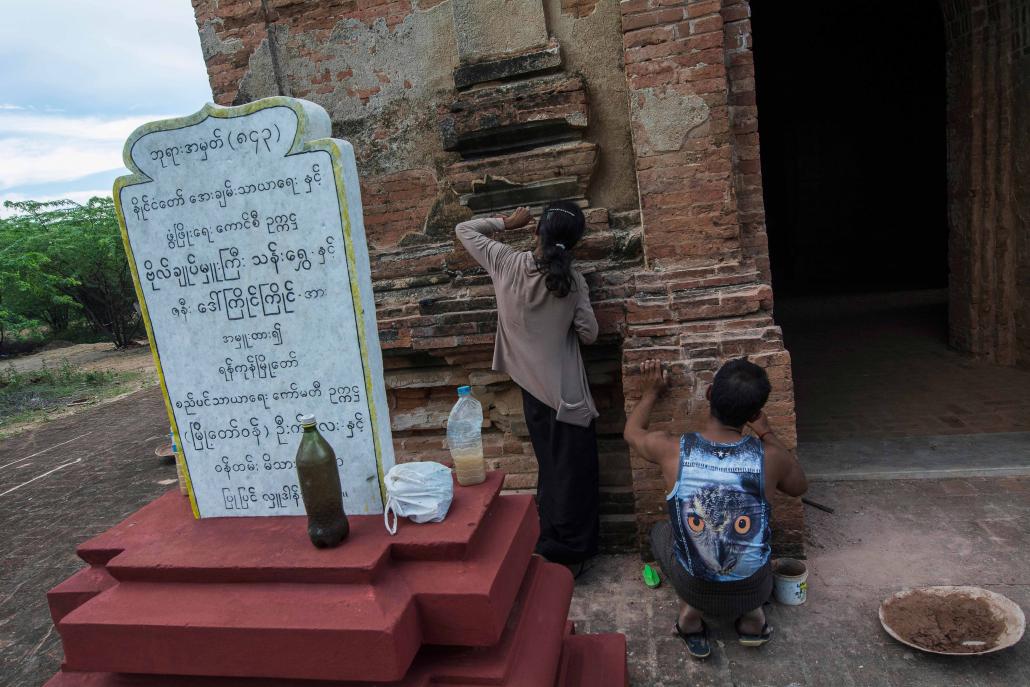 Graffiti has been defacing temples and pagodas at Bagan for generations.

Visits to 20 sites at Bagan by Frontier earlier this month revealed found hundreds of examples of graffiti, including at some of the best-known temples.

Most graffiti records the visitor’s name or their feelings about love, together with the date. The earliest example seen by Frontier was dated December 28, 1958 and the most recent was December 18 last year. 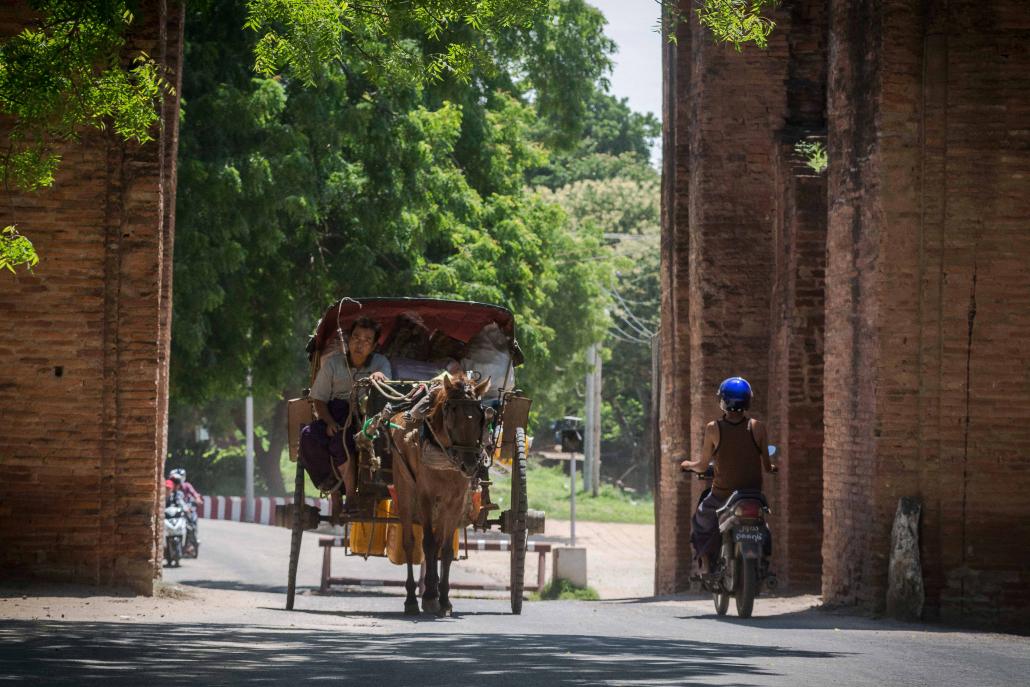 “Mural paintings have been spoilt by rainwater, insects, animals and earthquakes,” said U Myo Nyunt Aung, joint-secretary of the Bagan Heritage Trust. “During the wars [World War II and the civil wars after independence] local people took refuge in the temples. They lived and cooked in them, which spoilt the murals because of the smoke.”

Bagan is one of Myanmar’s most popular tourist attractions and foreign visitor numbers have soared since reforms began in 2011, when it attracted just over 100,000 visitors. Last year 250,000 tourists visited the Bagan Archaeological Zone – in addition to a large number of Myanmar visitors – and it has had about 150,000 visitors in the first seven months of this year. 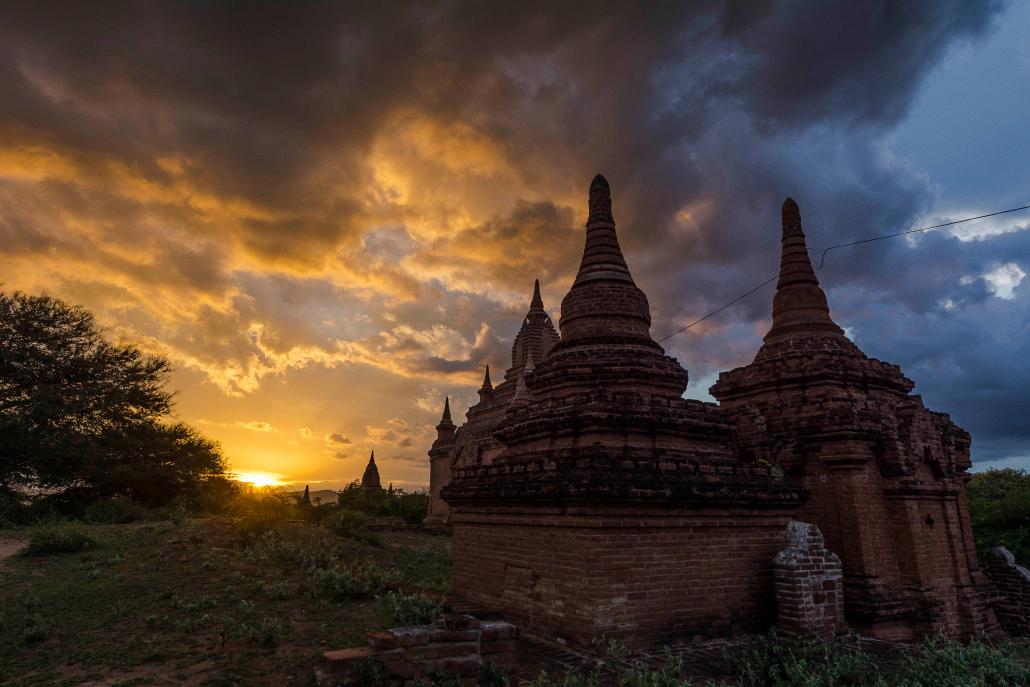 The entrance fee to the zone has risen gradually over the years, from US$10 in 1994 to $15 in 2013, $20 last year and K25,000 as of March 1. Tourist spending at Bagan, including at hotels, shops and restaurants, makes a significant contribution to the nation’s earnings from tourism.

Tourism at Bagan will boom even more if it is granted World Heritage status. But first, it’s time to stop scribbling on the walls of Bagan’s magnificent temples.