Deadly encounter over ‘the stone of heaven’ at Hkamti jade mine

Fossickers are resisting an order to leave a jade mining area in Sagaing Region, where a failed attempt to storm a company site last month left five men dead.

IT’S ONLY about 45 kilometres (28 miles) from Hkamti to the jade mining region around Nansibon village in far northern Sagaing Region, but the road is a river of mud during the wet season and the trip in a four-wheel-drive SUV takes four-and-a-half hours.

Jade mining dominates Nansibon, which in 2014 was granted village status by the previous Sagaing Region Chief Minister, U Thar Aye, a member of the Union Solidarity and Development Party.

Jade mining has a long history in the region, which is southwest of Hkamti, a trading town on the upper reaches of the Chindwin River. It was begun by Shan chiefs and opened up to the private sector by the former ruling junta in about 1995. There was an influx of private companies after 2001, leading to a sharp rise in the number of jade traders from China, as well as fortune-hunting fossickers from other townships hoping to become rich with a lucky find or two.

In about 2006, the discovery of new deposits of jade attracted more private mining companies to the region. The jade at Nansibon is more valuable than that mined at Hpakant, about 160 kilometres over the mountains to the southeast in Kachin State and better known as the main centre in Myanmar for producing what the Chinese prize as “the stone of heaven”. An egg-shaped piece of Nansibon jade that is about two feet high can fetch about K80 million (US$60,000). 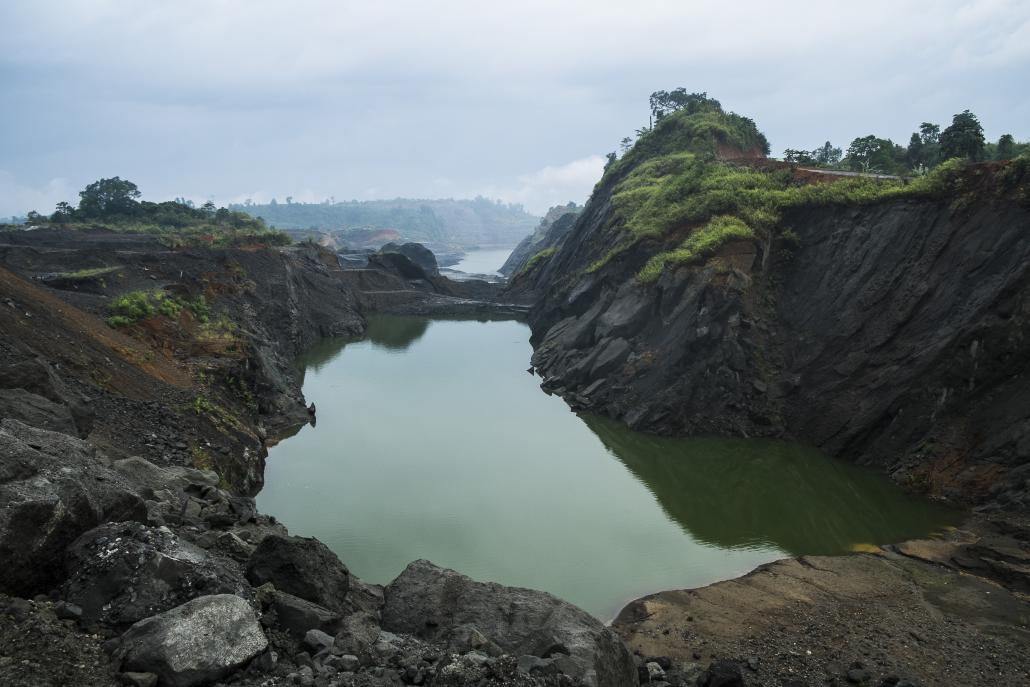 As interest in Nansibon jade continued to rise, more legal and illegal mining operations were established in the region in 2010. Encouraged by reports that villagers were finding jade in the alluvial soil, the number of itinerant workers converging on the area to fossick in mine tailings continued to soar.

The fossickers live in tents and their communities throughout the region are run by administrators appointed by the Nansibon region administrator. Each fossicking area has its own administrator, known as the Oak Gyi, or chief of the jade fossickers. The chiefs estimate the fossicking population at about 20,000 but the Jade Excavation Department puts their number at about 7,000.

In the area covered by Nansibon and the nearby village of Makyankha, there are 37 jade mining companies, including Myanmar Imperial Jade, a joint venture that also involves the military-owned conglomerate Myanmar Economic Holdings Ltd. Myanmar Imperial Jade is the area’s biggest miner, with 97 plots each covering one acre (0.4 hectares), said U Kyaw Wai, deputy general manager of the Jade Excavation Department office in Hkamti.

Other large miners include companies based in Kokang region, a Han Chinese enclave in northern Shan State on the border with China.

Villagers and fossickers scour the tailings deposits throughout the area but they have stayed away from the plots mined by Myanmar Imperial Jade, which they were forbidden to enter. 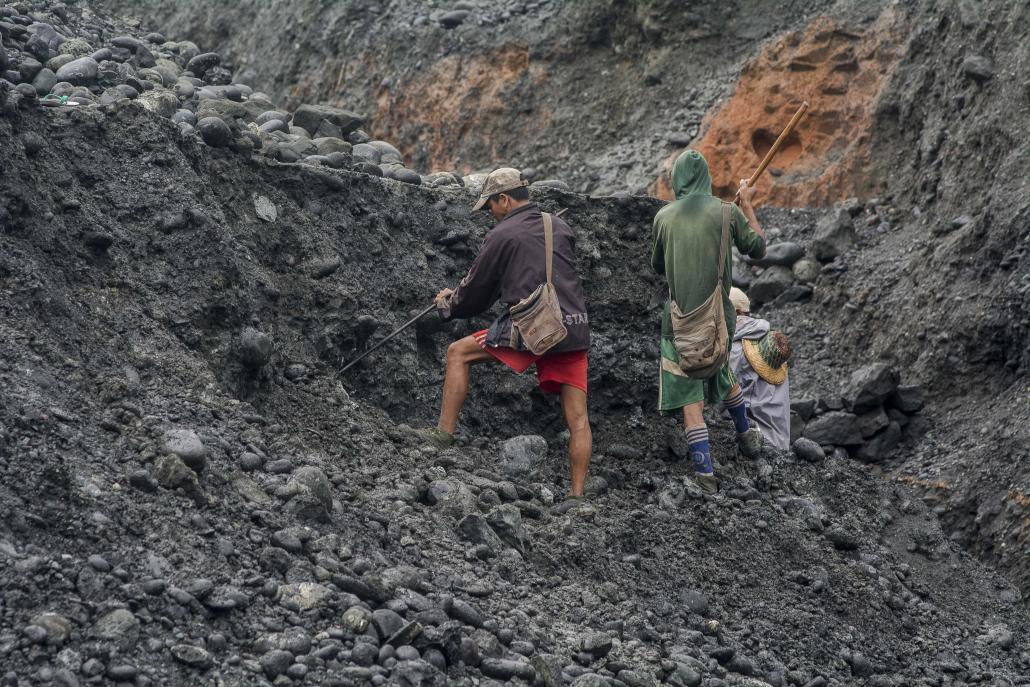 That changed on May 16, when about 300 fossickers tried to enter one of the company’s plots to search its mine tailings.

“We had heard that we could dig for jade at the mine and many people were talking about it so that’s why we went there on May 16,” fossicker Ko Zaw Zaw, originally from Magway Region, told Frontier.

When the fossickers approached a fence around the mine they were confronted by security guards who told them not to enter the site. However, a rumour spread through the fossickers’ camps that evening that they could enter the site and search the tailing’s deposits.

At about 7am on May 17, about 1,000 fossickers had gathered at the mine. On the other side of the fence were about 12 policemen and five soldiers. Tensions rose and a confrontation ensued, in which fossickers broke down the fence and swarmed into the site.

The security forces opened fire, killing one of the fossickers. Enraged, they took two policemen and a soldier hostage.

A fossicker involved in the melee said the hostages had denied opening fire. After a check of their weapons revealed that they were not loaded, the three men were released.

At about the same time, a fire engulfed a pile of disused tyres near fuel tanks in Myanmar Imperial Jade’s compound. It was followed by a volley of gunfire that killed three fossickers, fatally injured another who died en route to hospital, and injured four.

“We have the bullets and can prove who shot us,” one of the fossickers told Frontier. 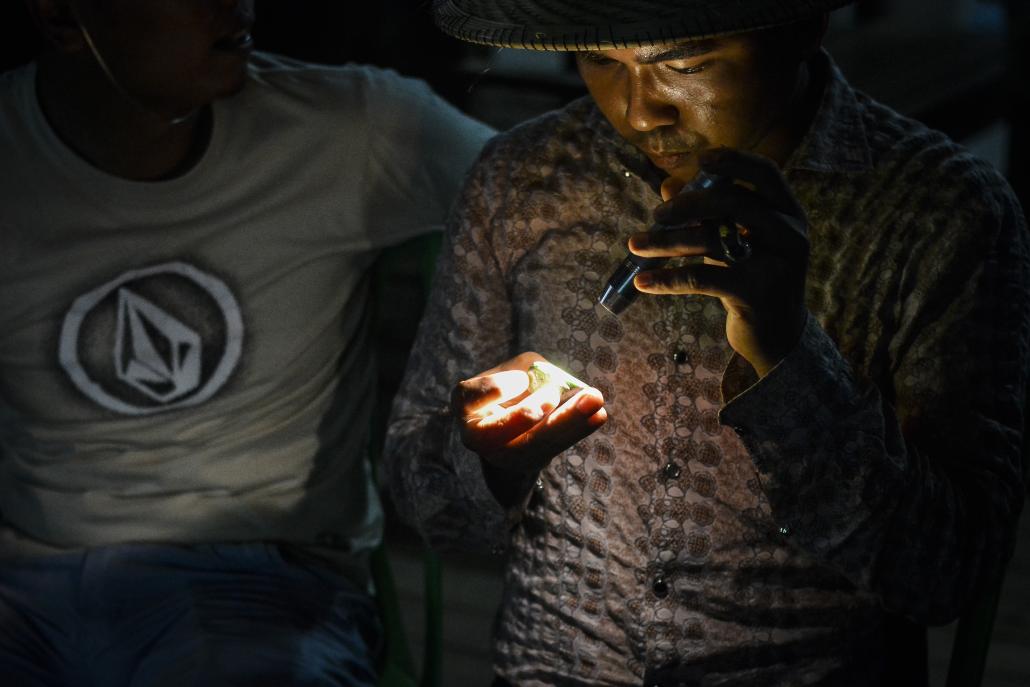 Rumours that fossickers would be able to search the tailings of Myanmar Imperial Jade plots had been circulating ahead of a visit to the area by Sagaing Chief Minister Dr Myint Naing on May 11. However, on May 13 he announced that all mining in the Nansibon-Makyankha area would be suspended until the regional government resolved problems over the fossickers, who ignored his order to halt their activities.

After the deadly confrontation on May 17, district administration officials ordered fossickers to leave the area. When Frontier visited, the township administrator was touring the area, announcing the order through a loudspeaker. He did not enter the fossickers’ camps.

By June 11, only about 4,000 fossickers had left the area, said Kyaw Wai, the official from the Jade Excavation Department office in Hkamti.

“They are leaving day by day. We have no exact plans for them. But we have our rules and regulations and laws. We will act according to the law,” he said.

“They ordered us to leave but we can’t,” Ma Win Win Htwe, 34, who runs a small shop in the area, told Frontier.

“We came here to make a better living because there are no jobs in the southern part of Sagaing and we will stay here as long as we can,” Win Win Htwe said. “When the time comes we will move to another jade mining area.”