Daw Suu, we need to talk 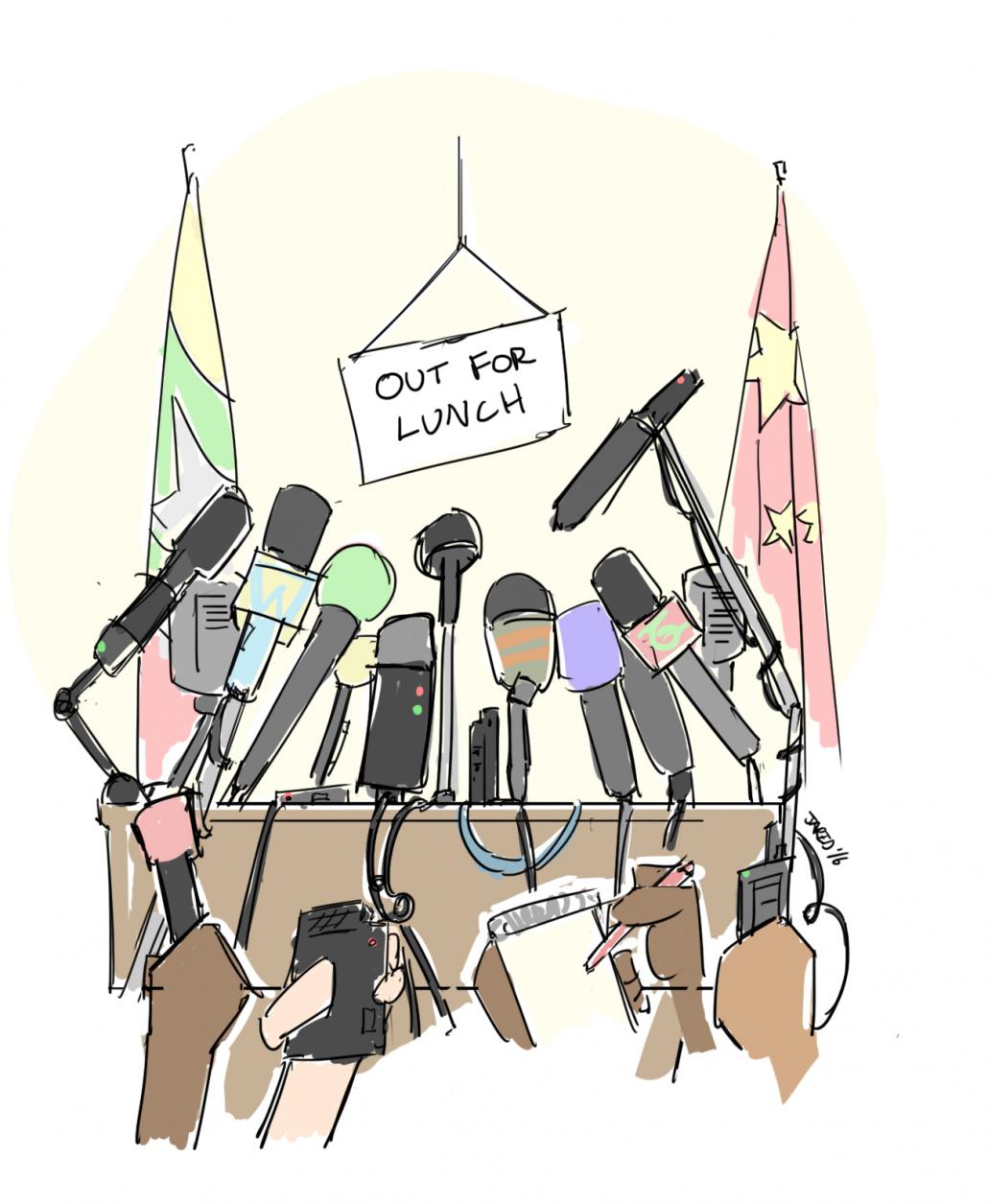 The new government wants their actions to do the talking, but rumour and speculation will prevail if Myanmar’s leaders don’t speak to the people.

MUCH has been written in recent months about the National League for Democracy’s relationship with the media. The party, and the government it formed, have shown little inclination to engage with journalists. Extracting information about plans, policies and even current activities is generally more difficult than under the previous administration – the one that was backed by the military and led by a former general, whose cabinet was also full of former generals.

It wasn’t supposed to be like this. We’ve said it before, and we’ll say it again: If the NLD wants to continue positioning itself as the party of democracy, it needs to show greater respect for and commitment to the values of transparency and accountability.

But this editorial is not about those values. It’s about confidence and trust.

In recent weeks, several sources close to Daw Aung San Suu Kyi have told Frontier that this attitude toward the media begins right at the top. Given that her profile and cause benefited so much from the support of the international media, it is ironic that she views journalists with such distaste. (If you’d like to set the record straight, Daw Suu, we’d love to hear from you.)

The Lady apparently prefers to let her actions do the talking. This is a noble aim, particularly when modern politics is so dominated by hollow spin. But it’s also largely unworkable in an age when people have the internet at their fingertips.

“Trust us” is not going to cut it for long. Even if the NLD gets everything right, most people in Myanmar will not see tangible benefits for years. The rebuilding of the country will be a decades-long endeavour.

Silence, though, creates the perception that there is nothing to say. That there are no coherent plans, no grand strategy – certainly, none of the “real change” promised during last year’s election campaign.

Advisers to the NLD say this is not the case. Policies have been prepared, across a range of important sectors, we’re told. The unprecedented visit of Tatmadaw Commander-in-Chief Senior General Min Aung Hlaing to Aung San Suu Kyi’s residence on Martyrs’ Day suggests that progress is also being made in political negotiations, or at least that the two leaders are forging a working relationship.

Of course, governments do not, and should not, disclose everything. Sensitive negotiations on certain topics should take place behind closed doors, in order not to endanger the outcome. But the default position should be transparency, for better or worse.

The current administration may also have valid reasons for keeping some information under wraps, for now. It is sometimes easy to forget that this country is only now emerging from decades of largely inept military rule, and perhaps as a result the new administration has been hit by unexpected challenges that require its previous plans to be revised. If this is indeed the case, it needs to start articulating what these challenges are.

There is a very real danger that in failing to disclose its plans the government will undermine confidence in its ability to deliver reform. Some would argue that this is already happening, particularly among local and foreign businesses – stakeholders whose support it will need to develop Myanmar’s economy in the years ahead. While the motivation is no doubt noble, the decision to tear up contracts and retroactively apply new standards has understandably made many jittery. Investors require confidence. They also require communication.

The looming launch of the party’s economic policy provides the government with an opportunity to regain some of this lost confidence. Unfortunately, it seems that some still favour a perfunctory release – one that is just for show, to appease the critics. Trust us: it’s only going to have the opposite effect.

The cult of secrecy needs to be broken. In last year’s election, the Myanmar people made it very clear that they want the NLD – and notably Aung San Suu Kyi – to lead the changes this country so desperately needs. Now is the time to impress, to show the people of Myanmar that they made the right decision.

This editorial first appeared in the July 28 edition of Frontier.

The view from Nay Pyi Taw: What it was like covering the coup in the capital