The Yangon Region government hopes a new tap system will help solve water shortages in the underdeveloped township of Dala, but residents would prefer authorities focus on improving more than 100 ponds where supplies are quickly diminishing.

THE RESIDENTS of Dala Township live beside the Yangon River but potable water is so scarce that many say it’s worth more than gold.

A chronic water shortage in the township, which is located just over the river from the downtown area of the country’s biggest city, was even the source of a nasty community dispute that cost a 20-year-old man his life three years ago.

The dispute was over access to a drinking-water pond at the entrance of Kanaung Danake Taw village, a 20-minute motorbike ride from central Dala.

The man lived in the house nearest to the pond and in April 2015, when it was running dry before the monsoon arrived, he verbally abused two women who had come to collect water, local residents who witnessed the incident told Frontier.

Feelings were running high over the issue because the village relied on the pond for its water supply. The man’s outburst led to a melee involving more than 20 people that ultimately caused his death. 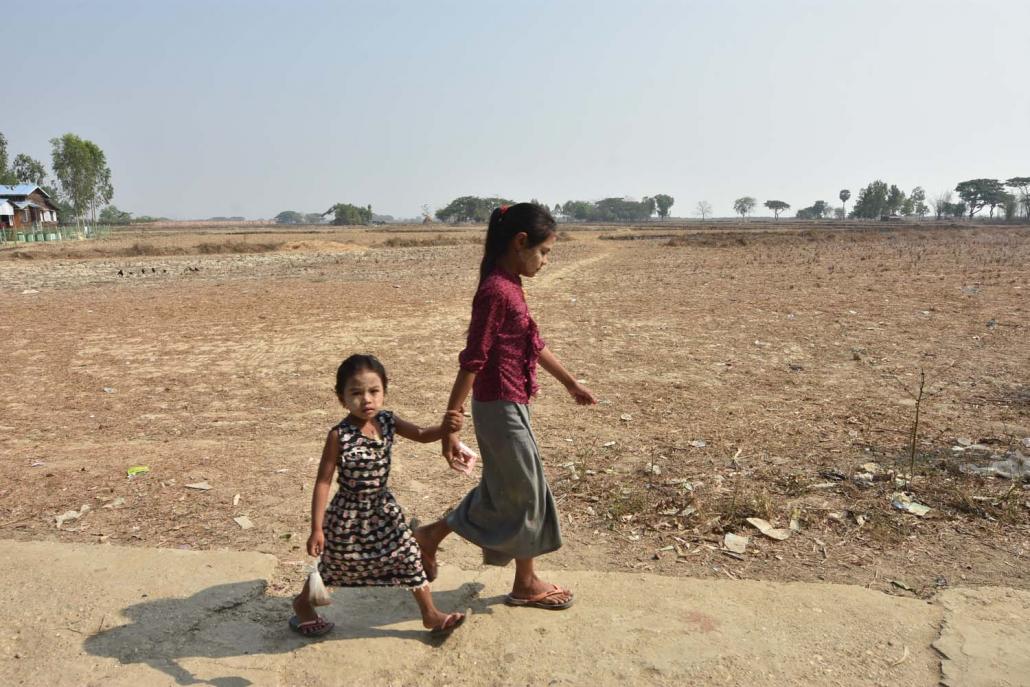 Subsequently one person received a 20-year prison sentence for murder, the residents said. Another four people received 10-year sentences for their role in the killing, and 16 others received sentences of between two and seven years for charges related to assault and trespassing.

“We were all depending on that pond; we don’t have other sources of water,” said U Zaw Win, a resident of Kanaung Danake Taw. “And the house [of the man killed] wanted to control all parts of the pond, and didn’t allow us to take water.”

Zaw Win was charged with trespassing in relation to the 2015 melee but was found not guilty. 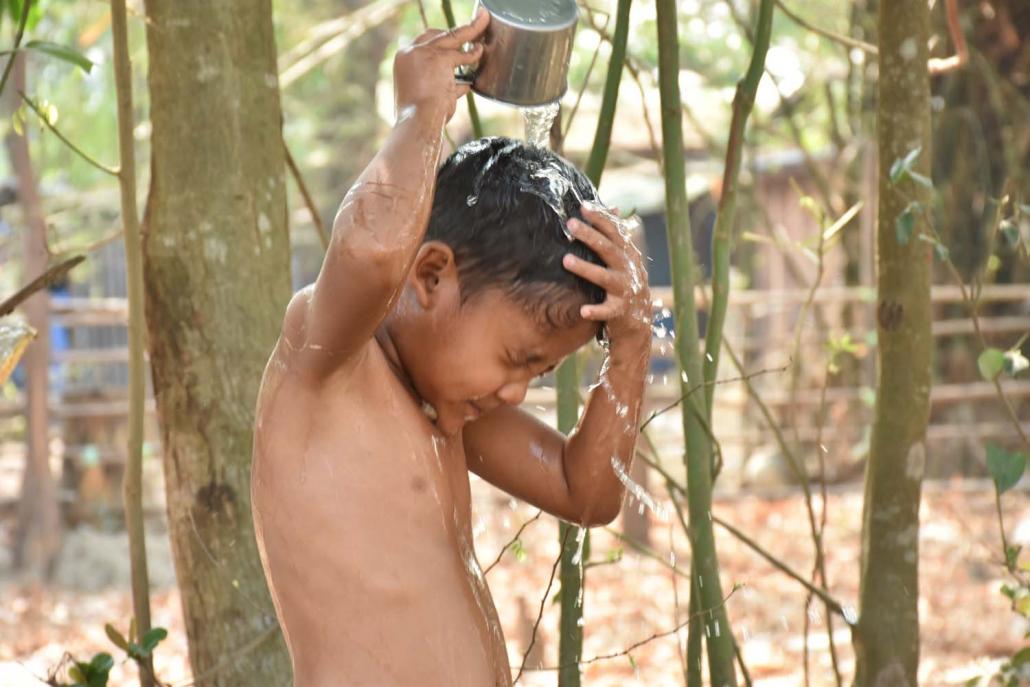 Myanmar’s Thingyan New Year Festival was celebrated across the country earlier this month, much of which involved revelers spending four days drenching each other with water. But for Dala’s residents, the water shortage meant those celebrations were muted, and much of the water that was thrown was of a murky brown colour, they said.

“In central Dala, we used water from the river but those in rural areas [of Dala] couldn’t throw water because there was none available,” said U Tin Myo Latt, a local resident.

According to the 2014 census, Dala has a population of 172,857 people living in 37,912 households. The township’s residents rely on 134 water storage ponds, but their supplies are quickly depleting, said Pyithu Hluttaw MP for Dala U Sein Mya Aye (National League for Democracy). 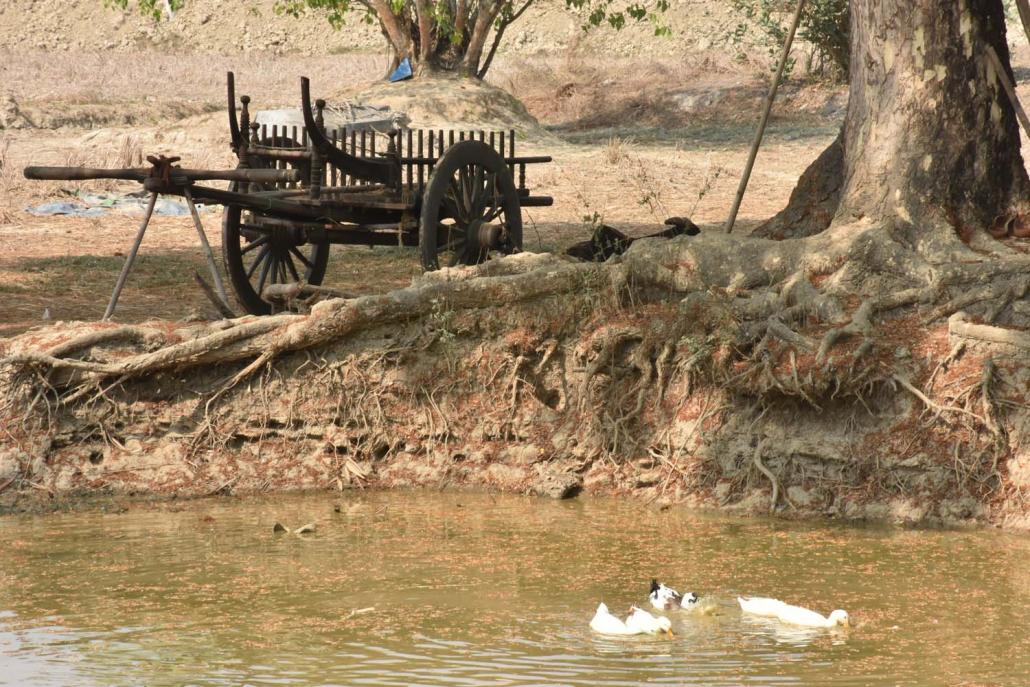 As a contingency, many residents spend the monsoon months filling up buckets of water that they hope will last the roughly seven months between the end of one rainy season ending and the start of the next – but it’s rare for the supplies to last that long.

One local organisation trying to alleviate the water shortage issue in Dala and other parts of Yangon is the Shin Yae Charity Association. Founded in 2015 the organisation plans to donate 40,000 gallons of water a day in Dala between the last week of March and the end of July. 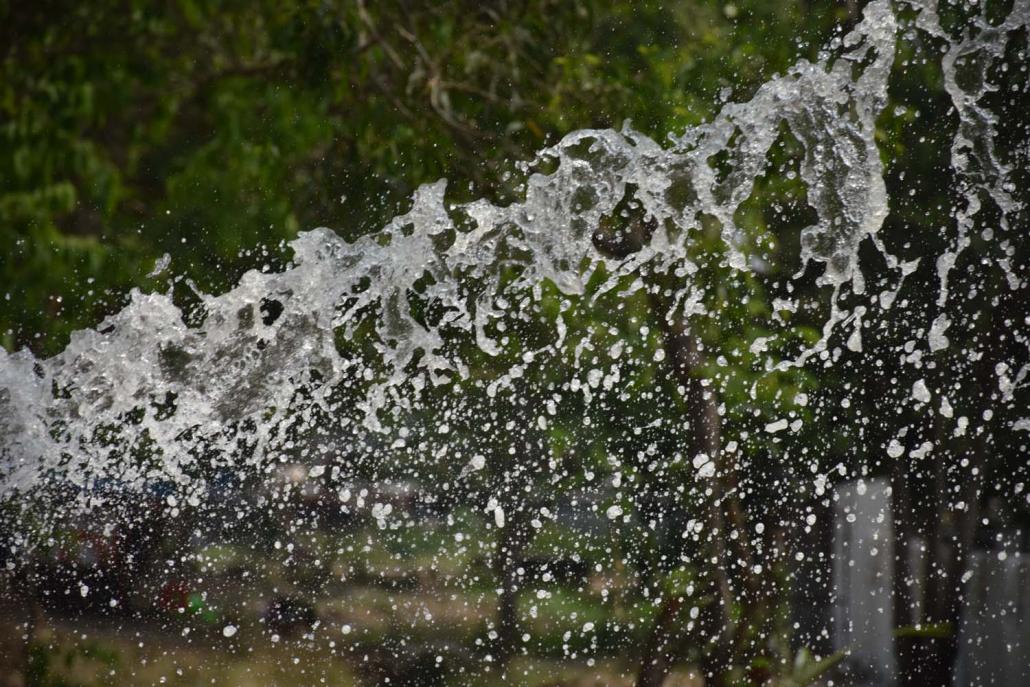 “Nobody drinks that municipal water,” said Tin Myo Latt, one of the residents. “Not for drinking, and not even for washing,” he said.

The Yangon Region government has initiated some plans to deal with the issue, but the impact so far has been minimal.

In June 2016, just months after the NLD’s U Phyo Min Thein became Yangon chief minister, the regional parliament announced two projects that would have the capacity to provide 100 million gallons of water daily across Yangon Region.

According to an article in Eleven Media, a project at the Kokkowa Reservoir in Hlaing Tharyar would provide 60 million gallons daily to 15 Yangon townships, mainly around the downtown area. Meanwhile, Dala would be one of three areas that would receive 30 million gallons daily from a project that takes water from the Toe River, which runs between Ayeyarwady and Yangon regions (the other two areas are Seikgyikanaungto Township and the Thilawa Special Economic Zone). 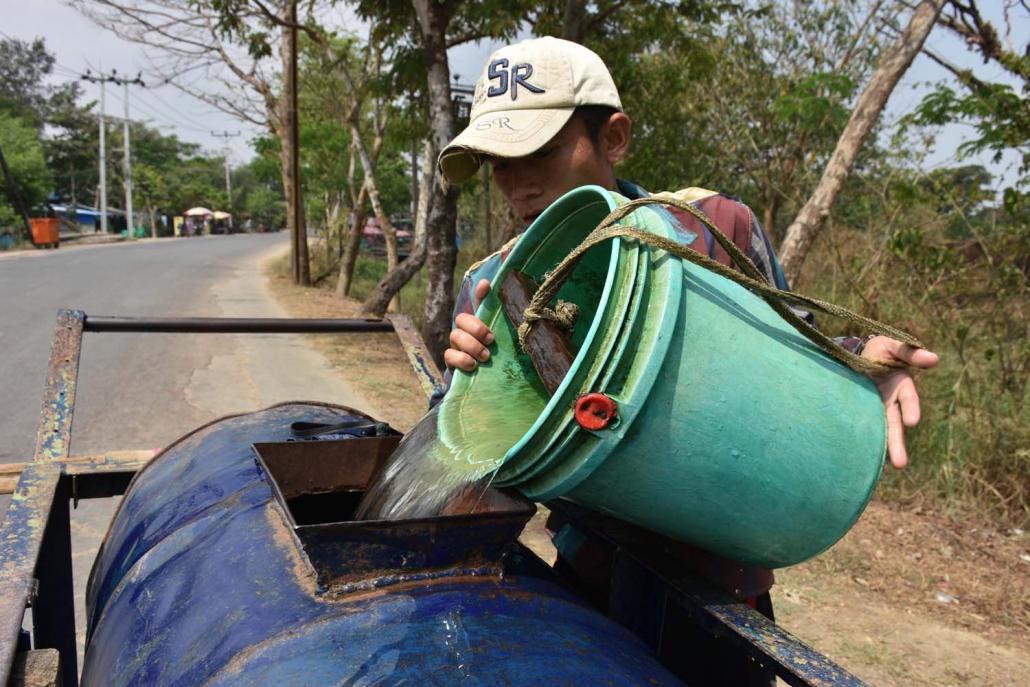 On March 5, Phyo Min Thein attended the opening ceremony of a water purification factory at Sar Par Chaung ward in Dala. At that event, Phyo Min Thein promised that Dala residents would have tap water “within six months”.

But local residents are skeptical, and say the tap system will only benefit those living in urban parts of the township. They have called on the government to first maintain the ponds that are already in Dala, and which are a crucial source of water for people in both urban and rural parts of the township. 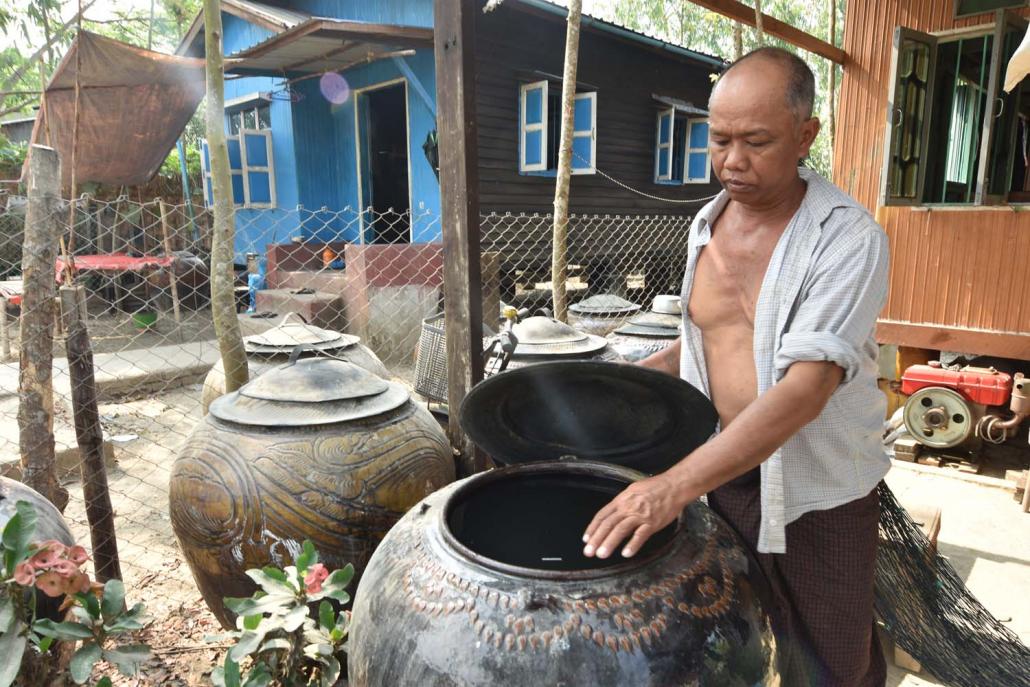 “We welcome [the tap water], but that will affect very few people in Dala,” said U Tun Tun Oo, chairman of the Shin Yae Charity Association. “So I suggest to the government to provide more ponds as a long term plan for those living in rural areas,” he said, adding that the water shortage is an added financial issue for many people who are already poor and living in rural parts of the township.

Sein Mya Aye, the local MP, called for residents to be patient. He added that the government has a limited budget for dealing with water shortages and residents should cooperate to resolve the problem.

“The government will do it, but we don’t know how exactly,” said Sein Mya Aye. “The Yangon chief minister has promised [it will happen], so we need to cooperate and take time to watch it. We hope it will be successful.” 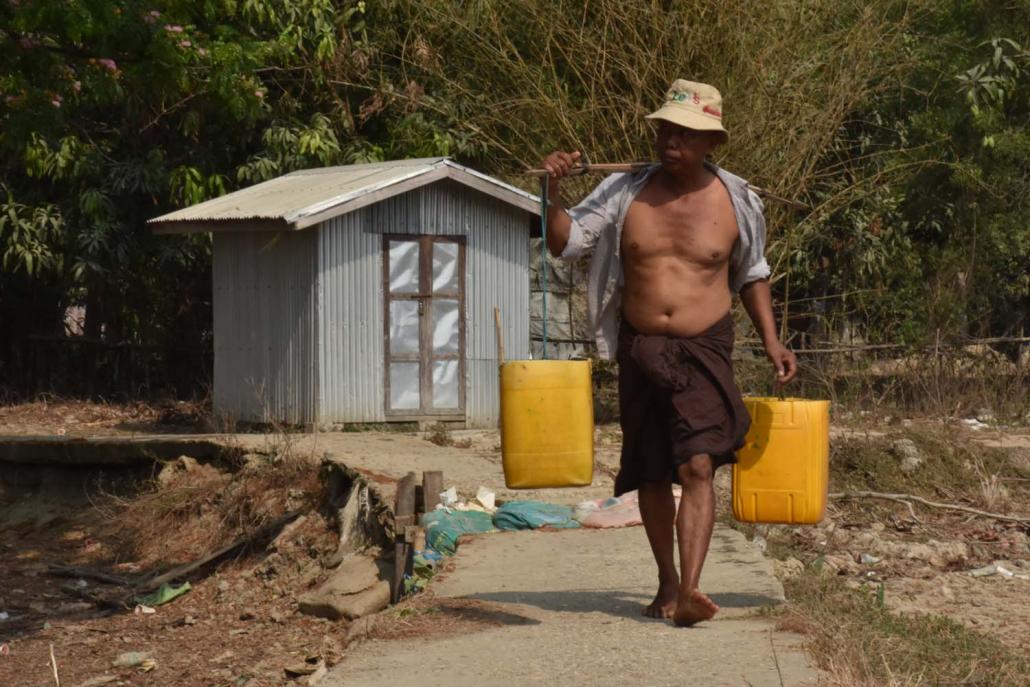 But locals do not appear satisfied. One resident, Tun Tun Oo, said that even though Dala is located very close to downtown Yangon, its lack of infrastructure means “it is like a rural area”.

Because so many of the township’s residents are poor, the tap water project is not suitable, he said.

“Please do more practical work to dig new ponds in Dala for the rural and urban sides. It will have more impact for the people of Dala,” he said.

TOP PHOTO: A young man carries buckets of water from a pond to his home in Yangon’s Dala Township. (Steve Tickner | Frontier)