Heavily made-up men who perform as nat kadaws enjoy broad acceptance in Myanmar society, but it’s a different story for cross-dressing men who sashay on stage as drag queens.

IN RECENT years, gender identity has become one of the most discussed, and controversial, topics in countries throughout the world, including in Myanmar, where an increasing number of people have become more open about expressing non-binary sexuality.

Despite murmurs of disapproval in what is an overwhelmingly sexually conservative society, many young Myanmar people, especially in Yangon, are celebrating new opportunities to embrace their non-binary identity, partly influenced and inspired by more tolerant Western and Asian societies, from the United States and Europe to Thailand and Taiwan.

At drag shows called “Tuesgay” held regularly at O’Thentic Brasserie in Yangon’s inner Dagon Township, and at dance parties hosted by LGBTQ+ (Lesbian, Gay, Bisexual, Trans, Queer and others) &PROUD at a different location each month, members of the LGBT community can relax and be themselves. The highlights of many of these events are lip-syncing performances by flamboyant drag queens wearing extravagant make-up and outfits sparkling with sequins.

However, cross-dressing by men is hardly a new phenomenon in Myanmar, where it is associated with the cult of nat worship that predated the arrival of Buddhism here and now lives alongside it.

Nat kadaws, the men and women regarded as the spouses of nat spirits, function as mediums between the mundane world and spiritual realm of the nats, and perform at special festivals and other events wearing elaborate costumes and make-up.

The annual Taungbyone festival, named after the village 20 kilometres north of Mandalay where it is held before and during the August full moon, in the month of Waso, attracts scores of nat kadaws and thousands of nat worshippers from throughout the country for exuberant celebrations.

Performances by nat kadaws, in which they enter a trance signifying possession by their guardian nat, are believed to convey important messages to their audiences. 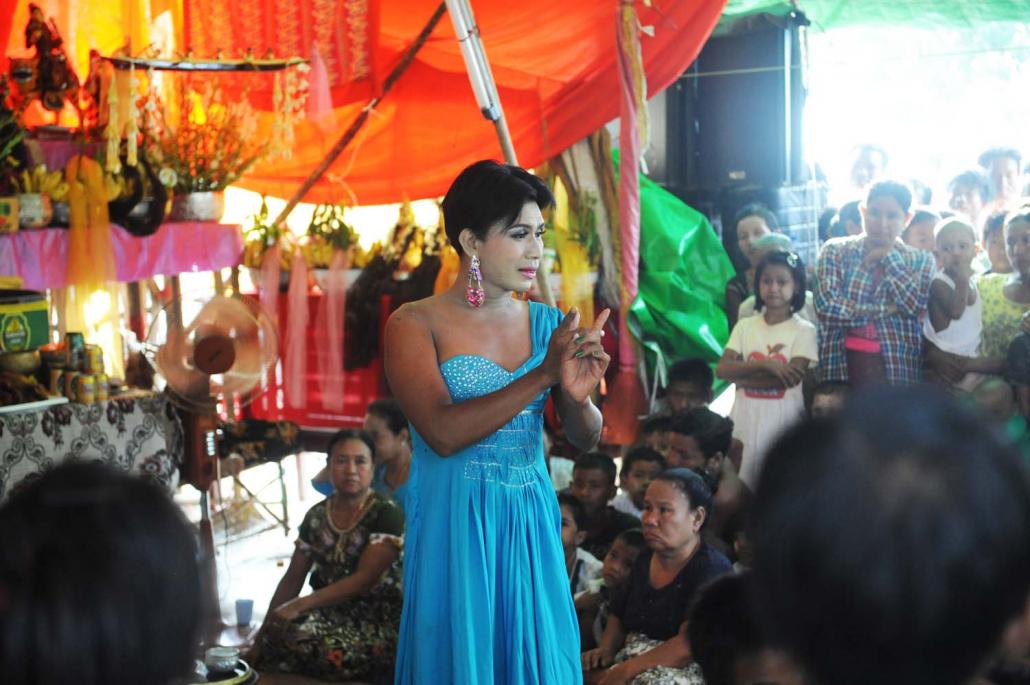 Nat kadaws are men and women regarded as the spouses of nat spirits. (Steve Tickner | Frontier)

When the nat kadaws go into a trance, members of the audience begin peppering them with questions about the future and requests for advice on the best school to send their children or how to ensure success in business. The sponsor of the performance rewards them with offers of money, drink and food.

There are many similarities, as well as differences, between the world of the LGBTQ+ community and that of nat kadaws.

“Nat” can refer to a plethora of nature spirits inhabiting the natural landscape, but in the context of nat kadaw it denotes the ghosts of mythical or historical personalities who hold grudges because they died violent deaths. By the 11th century, Bagan king Anawrahta had arranged them into a pantheon of 37 Great Nats.

Cross-dressing by men has been a staple of theatre and entertainment in countries around the world. It is a feature of traditional Chinese opera and the ancient Japanese theatrical performance known as kabuki. It was commonplace in Britain during the age of Shakespeare because of a taboo on women performing on stage, and today the character of the “dame”, played by a man in drag, is a fixture of British pantomime performances at Christmas time.

In European and American cities in the early 20th century, female impersonators performing on stage – the progenitors of what are today called drag queens – were associated with an underground gay culture that came gradually into the open as the century progressed.

International drag culture has had a visible influence in Myanmar. Ko Aung Zin Soe, 23, whose drag name is “Arial James”, told Frontier he was “inspired and encouraged” by “RuPaul’s Drag Race”, an American TV series featuring creative make-up and fashion contests for gay and transgendered men and hosted by famous American drag queen, actor and entertainer RuPaul Andre Charles. Aung Zin Soe is proud of a pair of thigh-high boots he made from black cloth, on which he sewed colourful buttons and attached heels.

While performers in drag shows often emulate famous entertainment personalities and lip sync their songs, nat kadaws act as mystical brides and channel voices from the spirit world. But, while said to belong to “tradition”, nat kadaw performances themselves have been influenced by international trends.

Performances have always been marked by fast-tempo percussive music played by traditional Myanmar orchestras, as well as frenetic dancing by the nat kadaws and audience members, but these days electronic dance music is part of the mix. 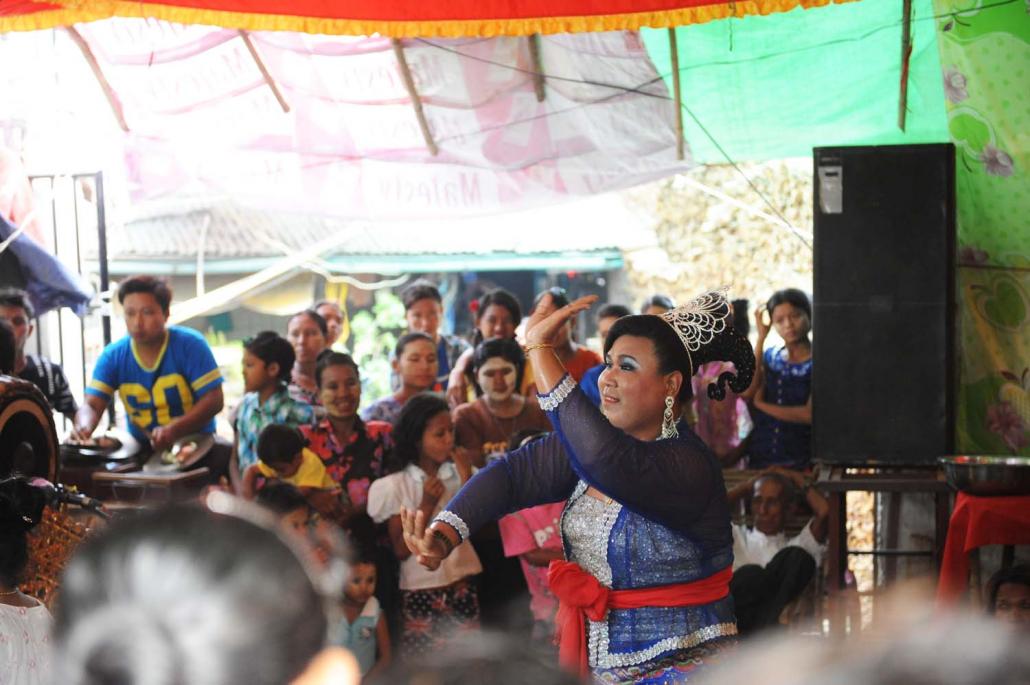 Nat kadaws function as mediums between the mundane world and spiritual realm of the nats, and perform at special festivals and other events wearing elaborate costumes and make-up. (Steve Tickner | Frontier)

In Myanmar’s predominantly Buddhist society, there is a belief that someone who is gay is a victim of karmic retribution for the sexual abuse of another in a previous life. Most people regard gays as being inferior and many people who come out as gay are rejected by their families.

In Myanmar, gay and transgender characters usually appear on TV and in movies as figures of ridicule and derision, said Sai Maung Oo, 26, the festival production officer at &PROUD, who said the way they are portrayed is one of the “major issues” that the organisation aims to tackle this year.

But while gays and people who reject gender norms often suffer scorn and rejection by society, nat kadaws are esteemed as powerful figures – the most successful of them are highly sought after and command high fees. About 85 percent of the population believes in nat worship, claimed Ms Tamara Ho, associate professor in women’s studies at the University of California, Riversdale, in “A Cartography of Nat Kadaws”, published in 2009. Entrenched belief and tradition appear on the surface to be out of balance with contemporary harmful stereotypes.

Both drag artists and nat kadaws assume a persona in their performances that does not necessarily reflect their sexual orientation in real life, but they differ in that both male and female nat kadaws assume feminine roles – a fact underscored by the word kadaw, which denotes them as the wife of a nat.

Drag kings, generally gay women adopting an exaggerated masculine persona, are an increasingly prominent part of international cross-dressing culture, but in Myanmar they are virtually unknown. It is usually gay men and transwomen who perform at drag shows in Yangon.

“Transwomen and gay men are the most active, lesbians and trans men much less, and bisexual people the least likely to participate in the film events we host,” said Maung Oo.

Gay men experience much less discrimination than women, Maung Oo said. As an example, he said he had heard homophobic, misogynous men tell gay women that if they had sex with them they would want to wear skirts again.

The pride film festival hosted by &PROUD at Yangon’s Thakhin Mya Park in January 2019 included a “Drag Queen Olympics”, but there have been no drag king competitions, at least not in public.

Maung Oo said they had introduced awards for the best-dressed drag kings attending &PROUD dance parties but, with few drag kings turning up, this tradition was scrapped after just a few parties. “It can either be because people are unfamiliar with the concept [of drag kings] or because society doesn’t really accept it,” he said.

Are drag queens accepted more readily than drag kings because of their similarities to the centuries-old tradition of nat kadaws, whether or not this link is consciously acknowledged? Myanmar’s emerging drag culture has helped widen the space in society for queerness and gender non-conforming people, but could the drag space itself be widened further?