A dearth of family planning services and sex education in Chin State is endangering women and reinforcing patriarchal culture.

LATE ONE night, Nu Ngun Bil Sung was called to help a woman suffering a complicated miscarriage in the eighth month of her pregnancy. The 67-year-old midwife travelled as quickly as she could through mountainous, jungle-covered terrain of remote Chin State to reach the woman’s village.

“When I arrived, the baby’s body had already been delivered, but the head was cut off and had been left inside the womb,” said Ngun Bil Sung. “The placenta was all mashed up inside her.”

She questioned the woman, who admitted she had travelled to Falam, the nearest town, for a late-term abortion before returning to her village. The abortion provider had timed it so that the drugs she administered vaginally would kick in when the woman reached her home — far from a hospital — and her neighbours would think she was having a miscarriage.

“The woman was in a very bad way,” Ngun Bil Sung said. “She was bleeding a lot and exhausted.”

With difficulty, Ngun Bil Sung saved the woman’s life, but in the morning the villagers were furious with her. They accused the mother of murdering her baby and said she should have been left to die.

Ngun Bil Sung has never received any formal training. But in the 32 years since she was “called by God” to assist women in labour in devoutly Christian and deeply impoverished Chin State, she estimates that she has safely delivered nearly 1,500 babies, including her own.

“Mai Nun Thiam regularly encounters women who say they don’t want to have more children, but their husbands won’t let them stop conceiving. Sometimes they ask to be supplied with contraception in secret, but often they are too afraid.”

Although she earns a living from childbirth, Ngun Bil Sung’s vast experience has led her to believe that people in Chin State need better family planning advice and greater access to contraception.

Her views are based on a number of observations from her work. In addition to having seen desperate and dangerous illegal abortions, she said in about a third of births she attends, the mother had fallen pregnant shortly after giving birth to her previous child. Another is that many of the women are either very old or very young to be giving birth, putting them at greater risk of miscarriage and other complications.

About 40 percent of women in Myanmar use contraception, but in Chin State that figure is just 3 percent, according to United Nations figures. World Bank figures show that Myanmar has the second highest maternal mortality rate in Southeast Asia, with unsafe abortion one of the leading causes of death. UN figures show that 87 percent of maternal deaths occur in rural areas, which account for 70 percent of Myanmar’s population.

But improving access to family planning services and reproductive health education in Chin State will be extremely difficult. Many Chin people believe using contraception is against God’s wishes and promotes promiscuity. There is also a commonly held view, particularly among men, that women are meant to have babies whenever they can, for as long as they can. 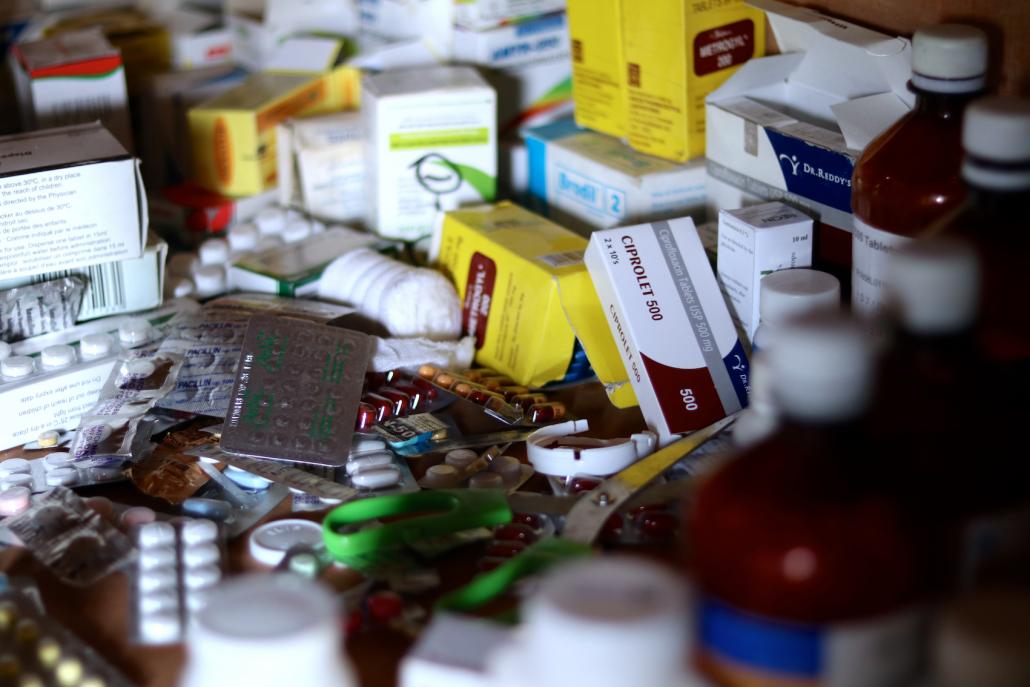 Mai Nun Thiam, a 28-year-old government midwife who works in Si Ngai village, Falam Township, regularly encounters women who say they don’t want to have more children, but their husbands won’t let them stop conceiving. Sometimes they ask to be supplied with contraception in secret, but often they are too afraid. Recently, she said, she was approached by a 31-year-old schoolteacher who had five children already and didn’t want another. The woman’s husband, though, had decreed that she would “keep having babies for as long as she can”, Nun Thiam said.

The midwife said this reinforced the power men held over their wives: The more babies women have, the more dependent on men they become. “It becomes their duty to look after the children, while the husbands go to the farm and become the sole provider of the family, so they are stuck in an inferior role. As they keep having babies their role gets lower and lower, to the point where they have to listen to everything their husband says.”

Dr Henri Za Lal Lian, manager of Marie Stopes International’s Falam Centre, said he had seen women who had to obtain contraception, such as intrauterine devices and contraceptive implants, without their husbands knowing. “Sooner or later the husband finds out and immediately asks them to go and take it out,” he said. “It’s not exactly domestic violence, but they can be pretty rough.”

Za Lal Lian explained that a woman who doesn’t produce enough babies is considered both a bad wife and a bad daughter-in-law in Chin State. “[The family] can practically disown the woman and nobody says a bad thing about them [the family].” 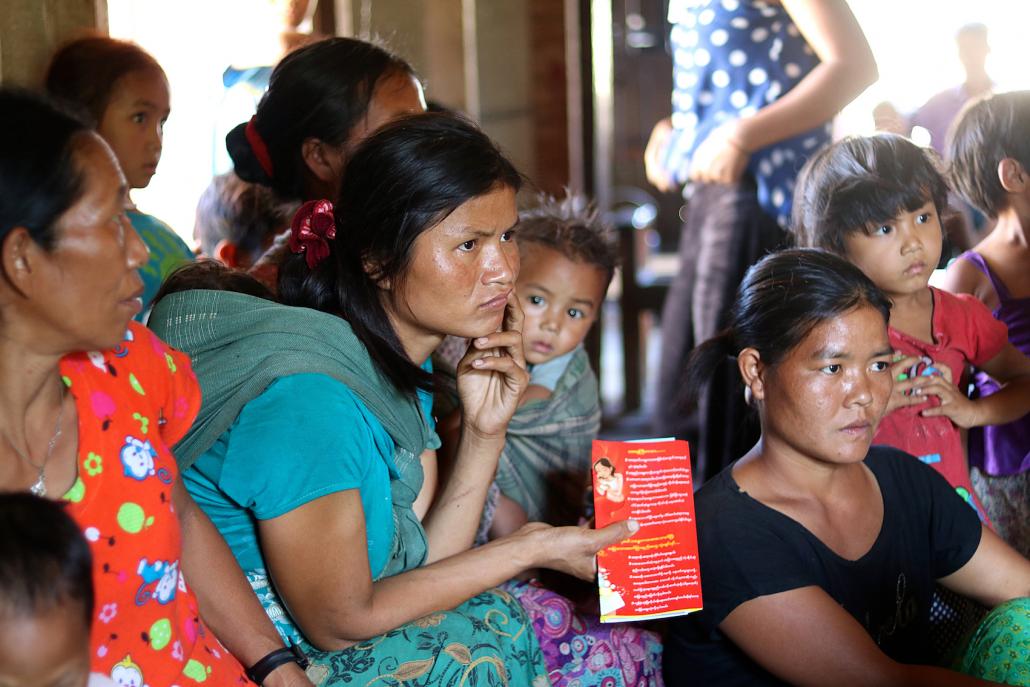 A group of women listen to a presentation by Marie Stopes International about reproductive health in Chin State. (Charlotte England / Frontier)

On the other hand, it is considered completely unacceptable for unmarried Chin women to have children. Single women with babies are stigmatised and shunned, and many turn to abortion.

Nun Thiam said that when she worked in Falam town at least five women came to her seeking abortions because they weren’t married. She turned them all away. Three of the five were subsequently forced by their families to marry the fathers and bear children they didn’t want. The other two, she believes, successfully sought abortions elsewhere.

Abortion is illegal in Myanmar, except to save a woman’s life. Of course, this doesn’t stop abortions from happening – it just means they’re unsafe, expensive, and often a desperate last resort for unmarried women and people who can’t afford to have more children. Difficulty accessing abortion can also force women to wait longer, resulting in even more dangerous late-term abortions, at six, seven, or even eight months.

One source told Frontier there had been nearly 150 abortions so far this year in Falam Township — population 50,000 — alone. Local people said they knew of at least two illegal abortion providers in and around Falam. Many also told of people going to the state capital, Hakha, for an abortion. They said that all providers charged according to the same scale: K100,000 for a pregnancy of one month, K200,000 kyat for two months, and so on.

The same stigma that forces unmarried women to have secret abortions makes unmarried people who are sexually active afraid to buy contraceptives in pharmacies, in case people see them and talk about them.

In a bid to surmount this, Mai Elizabeth Kim, a staff member at Marie Stopes International’s Falam office, explained that part of her job was to discreetly deliver condoms and emergency contraception to Falam residents who phone and ask for supplies or advice.

Chin people, particularly women, are also made vulnerable by a lack of information. Sex education was only recently introduced in government schools as one element of a ‘life skills’ class. It is not compulsory, and many teachers – who are normally women – are reluctant to discuss sex with their students. As a result, many people have little knowledge of the contraceptive options available to them and no concept of safe sex. Women are often told by their parents just to stay away from men once they hit puberty.

“It’s important for young women like me to have knowledge before they become sexually active, so that they can protect themselves,” said Mai Helen Leng Zun Rem, a 26-year-old who also works at MSI in Falam. She said some of her peers had become pregnant unintentionally, including an unmarried woman from an extremely poor family who at 23 already had two small children.

Leng Zun Rem said the woman was one of seven siblings, none of whom had been formally educated. She began working as a labourer on road projects in distant parts of the state to support her family. Away from Falam, she was surrounded by male road workers and with little knowledge of sex, let alone contraception, she quickly fell pregnant. “Everyone talks bad about her,” said Leng Zun Rem. With two dependants and the stigma of sex before marriage, the woman now had almost no chance of escaping poverty, she said. 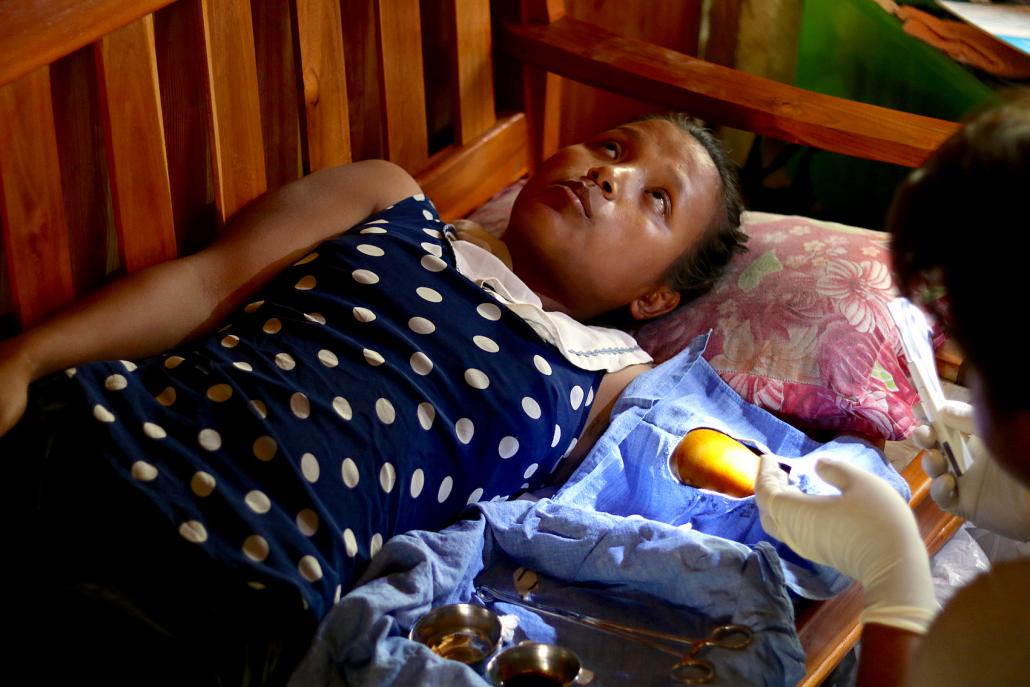 A woman at a clinic in Chin State receives an implant from Dr Henri Za Lal Lian. (Charlotte England / Frontier)

Despite an abundance of individual injustices in Chin State, the reproductive health of Chin women is broadly improving, albeit slowly. When MSI first arrived in the region, they faced deep hostility, including verbal attacks from strangers in the street. Now they have seen 13,725 clients in Chin State – below their target, but a respectable number considering not only the cultural barriers but also the sparse population and tough terrain.

Za Lal Lian said encouraging men to attend education sessions had increased the uptake of services. “The husbands are still the key players in their household, so male involvement is critical,” he said.

But while pragmatic, persuading men to co-operate does little to challenge patriarchal norms, at least in the short-term: women still don’t have the ability to make independent decisions about their reproductive health in Chin State, despite the fact that they’re the ones who are endangered in childbirth, who are responsible for caring for children, and who sometimes have no choice but to undergo dangerous, illegal abortions.

To sustain progress and eventually bring about wider change, Za Lal Lian looks to the new government. To begin with, he said, comprehensive sexuality education needs to be implemented in schools all across Myanmar. Personally, he said, he’d also like more research to be done into the impact of the abortion ban on women in Myanmar, and for the relevant sections of the Penal Code to be reviewed.

“[A woman should] be in charge of her own body,” he said, “and make her own choices regarding reproduction health.”

Charlotte is a freelance journalist based between London and Yangon. She writes in-depth political features with a focus on social justice, feminism, gender, protest movements, migration and development. She writes for the Guardian and VICE, among others.