A recent report says there are deficiencies in a $480 million World Bank-funded project to upgrade and empower rural communities that has brought positive change to millions of lives.

THE CONCRETE road that runs through Pa Inn Gyi village in Yangon Region is a striking example of globalisation.

Contributions from the World Bank’s dozens of member states, and decisions made in Washington, Nay Pyi Taw, Yangon and at the Pa Inn Gyi village assembly led to the building of the road. It is an achievement realised by the work of people far apart whose collective efforts are helping to reduce rural poverty in Myanmar.

Although Myanmar was recognised by the Asian Development Bank earlier this year for having the fastest growing economy in the region – forecast to reach 8.4 percent this fiscal year – many rural areas lack basic infrastructure, such as paved, all-weather roads, access to electricity, and flood prevention measures.

Myanmar and international NGOs have been tackling these issues for years and have improved the livelihoods of many, but their projects often lacked the scale to make a significant impact at the national level.

The Department of Rural Development at the Ministry of Agriculture, Livestock and Irrigation is the agency tasked with tackling poverty outside urban areas. While there were few credible programs to reduce rural poverty under junta rule, the importance of the task was finally acknowledged by the government of President U Thein Sein. 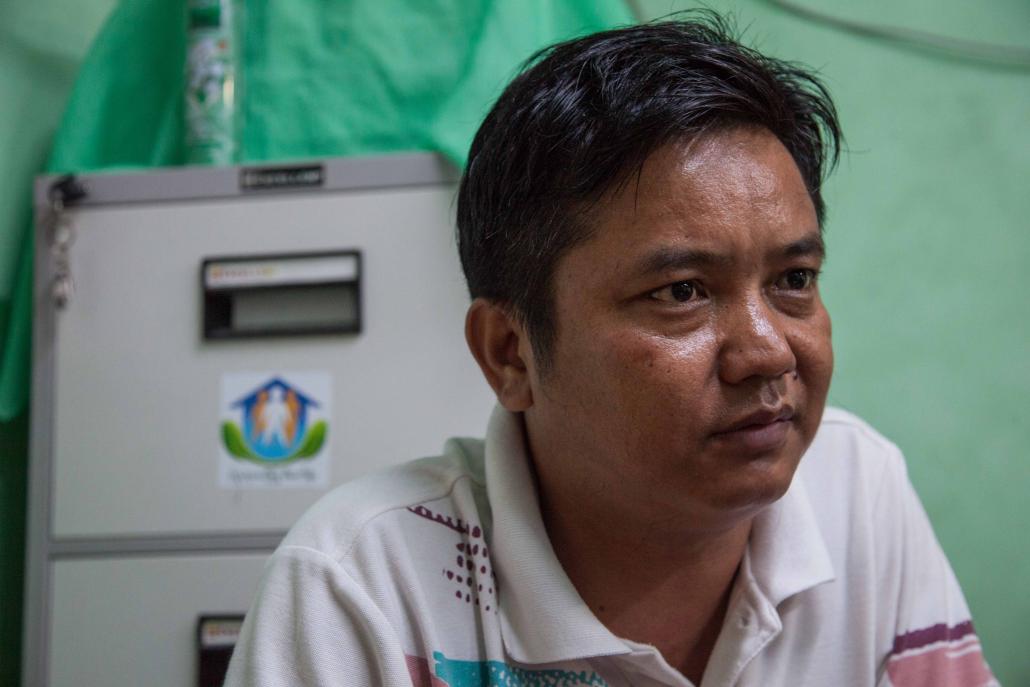 When the World Bank resumed lending to Myanmar in 2012 for the first time in 25 years, the DRD consulted it on ways to foster rural development. The result was the National Community Driven Development Project, which received initial support of US$80 million (K98 billion) from the World Bank in 2013.

The project was upscaled considerably last year through an interest-free loan of $400 million. It is now one of the two biggest World Bank projects in Myanmar, the other being a credit of equal size to increase access to electricity.

The NCDDP (sometimes referred to as CDD) was launched in three of the country’s poorest townships and has been gradually expanded. By the middle of next year it will reach 47 of Myanmar’s 330 townships.

The main objective of the community-driven approach is to put villagers in charge of projects. They hold meetings to decide on priority projects and apply for grants at the local DRD office. Every village in the selected townships, whether it has registered or not, is given an opportunity to participate and is eligible for a yearly grant of between $5,000 and $6,000 on average, depending on the size of the community.

Rural development projects often fail to meet the needs of the local population, but the community-driven approach ensures that everyone has a say in the decision-making process. However, the NCDDP has come in for harsh criticism in a recent report by IFI Watch Myanmar, an NGO.

Mr Nikolas Myint, the head of the World Bank team working on the project, said initial concerns that communities may not be willing to cooperate because of a well-established distrust of government institutions developed during decades of junta rule turned out to be unfounded.

However, the process of choosing the townships to participate in the scheme was delicate, he told Frontier. To determine which townships were most in need, the DRD held meetings in each state and region and the Nay Pyi Taw Union Territory with a wide range of groups and individuals involved in rural development.

After deciding last year to spend their grant on paving the main village road and connecting it with a nearby busier road, the residents of Pa Inn Gyi, in Yangon Region’s outer western Htantabin Township, chose to spend this year’s allocation on an electrification project to link 65 of the community’s houses to the national grid.

“This village is not rural anymore,” said U Saw Myint Swe, 48, in a comment expressing the positive impact the projects have had on the lives of most Pan Inn Gyi residents.

Although a budget of K9.6 million was spent on power poles, each villager needed to contribute an extra K500,000 to have their homes connected. Those who could not afford the extra payment were not able to benefit immediately. This group included resident U Kyaw Myint. Despite missing out, he told Frontier he welcomed having electricity in the village and said the decision-making process was fair.

Kyaw Myint added, however, that he would have preferred that residents had invested more in providing street lighting than connecting their homes.

In neighbouring Kyoung Kone village, residents decided to spend their grant on a new main road through part of their community. Even though the road did not benefit all of the village’s residents, residents interviewed by Frontier said they were content with the outcome. 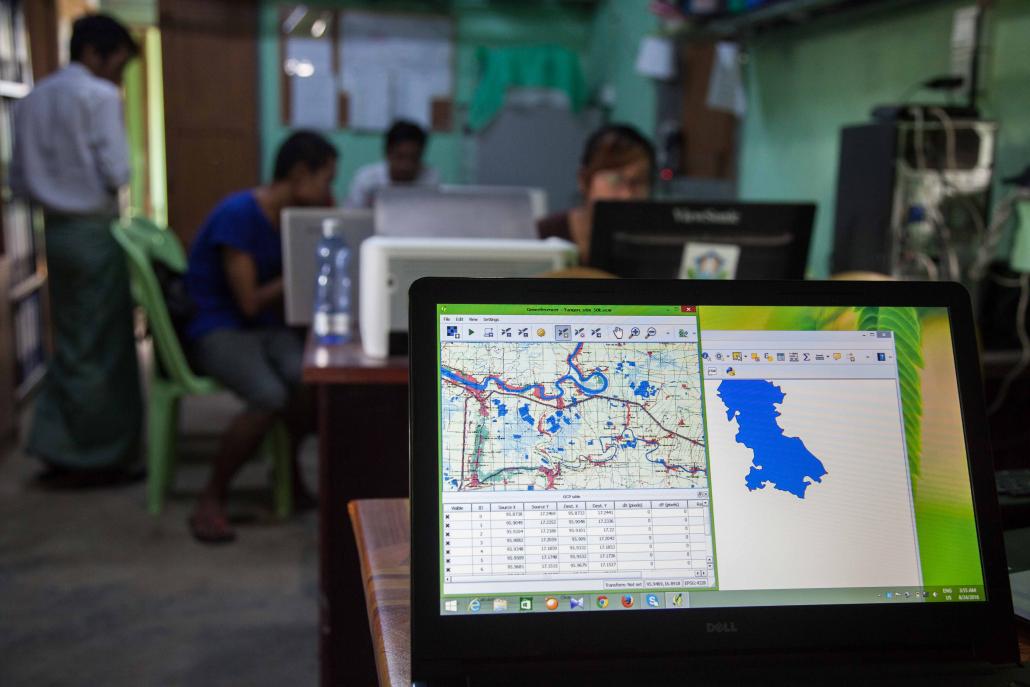 A computer screen in the Department of Rural Development office in Htantabin shows a map of the township. (Theint Mon Soe — J / Frontier)

There is a history in Myanmar of democratic decision-making at village meetings. However, achieving it in practice can be challenging due to the hierarchies in Myanmar society.

Each household is entitled to have one representative at the village meetings. This is usually a family elder, meaning that the younger generation is under-represented in the decision-making process. However, the project does provide for gender equality, through quotas guaranteeing that women hold a share of positions on the sub-committees that oversee implementation.

The community-driven project is different to how the World Bank normally operates. It usually provides large credit sums to a range of institutions, an approach that involves less supervision and technical assistance. The NCDDP is the opposite: it is providing many small grants – so far to about 5,000 villages and about three million people – which requires more training and supervision on the ground.

The project aims to ensure transparency by requiring that information sheets showing how grants have been spent are posted at central locations in villages. This enables residents to see where the funds have gone.

Myint from the World Bank regards the project as a success. In their yearly multi-stakeholder review meetings, DRD and the World Bank have tracked and tackled some major problems.

However, not all agree with the bright picture painted by the bank and the DRD.

IFI Watch Myanmar, which monitors the activities of international financial institutions such as the World Bank and the Asian Development Bank, recently released a report that was highly critical of aspects of the NCDDP.

IFI Watch Myanmar said the report, How community-driven are CDD projects in Myanmar?, was  aimed at providing information about “the gap between the grand objectives that have been overhyped and the actual conditions that communities face in the management of the CDD projects”.

The report says that in many cases villagers had no clear idea what a project was about, which had been a hindrance to their willingness to participate, let alone exercise proper control over the work of local sub-committees.

The report also said a focus on achieving results quickly did not allow enough time to inform communities, train management or implement projects. This had resulted in community members feeling left out, facilitators and managers either being overworked or following their own interests, and deadlines being rushed, it said.

Myint agreed that these issues were major problems to the NCDDP in the early stages but were brought up at the annual multi-stakeholder reviews and addressed. He added that some of the research on which the IFI Watch report is based is more than a year old.

IFI Watch said other key areas of concern included coercion and threats to communities, corruption in the form of kickbacks connected to the recruitment of local staff, and inadequate training for community facilitators.

Community facilitators, who serve as the link between the sub-committees, village assemblies and DRD township officers, are crucial for the smooth implementation of projects.

According to the DRD and the World Bank, these issues should be handled through a grievance mechanism accessible from every village. The cases tracked by IFI Watch were handled by DRD and the staff involved were sanctioned, according to Myint.

Although IFI Watch acknowledged widespread satisfaction among villagers with the results of the project, it doubted whether the NCDDP would succeed in achieving its long-term objective of grassroots empowerment through democratic decision-making at community level.

IFI Watch said it had observed that many villagers were more focussed on short-term benefits rather than long-term achievement, possibly leaving them reliant upon outside help for further improvements in their standard of living.

The CDD approach encourages communities to take responsibility for their development. If the residents do not have a feeling of being in control because of a lack of information, the project is likely to fail, argues the report.

Mr Felix Haas, a Yangon-based development consultant, joined the critique, saying that while the program empowers communities by providing money and support to much-needed developments, it “does not represent a sustainable solution due to the dependence on external support”. A more sustainable solution would be to improve the level of income for community members through “sound economic planning”.

He also doubts the capacity for CDD projects in Myanmar. Years of isolation mean that many residents, particularly in rural areas, lack information on potentially transformative technologies or concepts, such as new techniques in farming or new seeds. This makes it difficult for them to boost their capacity to improve their livelihoods in the long-term, he said.

The World Bank’s involvement in NCDPP is due to end in 2021, so there is time to make further improvements to the project. Italy provided an interest-free loan €20 million (K27.6 billion) for the project last year and Japan is also considering becoming involved. But what happens to the project after 2021 remains unclear.