YANGON — Environmentalists, scientists, writers and monks called for the cancellation of the Myitsone dam at a meeting in Yangon on Monday, at which a committee was formed to fight for the termination of the US$3.6 billion, China-backed project.

The meeting came amid pressure from Beijing for work to resume on the dam and followed State Counsellor Daw Aung San Suu Kyi’s March 20 comment that the 6,000MW project needed to be considered from “a wider perspective”.

Work on the dam, on the Ayeyarwady River about 42 kilometres upstream from the Kachin State capital Myitkyina, was suspended by President U Thein Sein in September 2011 amid escalating and emotionally charged protests against the project.

A joint venture between China’s State Power Investment Corporation and a Myanmar conglomerate, Asia World, began work on the dam in 2009 under a memorandum of understand signed by the ruling military junta and the Chinese government three years earlier.

An agreement provided for most of the power generated by the massive dam, which would inundate an area as big as Singapore and displace thousands of people, to be exported to China.

The State Counsellor was quoted as saying that if her National League for Democracy government broke promises made by a previous administration, it would lose credibility with investors.

Tun Lwin said there were examples of governments not keeping promises for the sake of their people and the national interest, citing the decision by the Malaysian government to cancel China-backed infrastructure projects worth billions of dollars.

“I want the government to listen to the people and cancel the Myitsone project,” he said. “Otherwise I believe the future will not be pleasant.”

In his speech Tun Lwin said he did not support the Myitsone dam because the Ayeyarwady River was more important than Myanmar itself. Global warming was already leading to water shortages, he said, and blocking the flow of the river would endanger the country’s future access to water.

The former director-general of the Department of Meteorology and Hydrology also expressed regret that his warnings about the impact of climate change on Myanmar were largely ignored.

“Sadly, no one has listened enough, especially government officials. This is the fate of our country,” said Tun Lwin, adding that the average temperature in Myanmar had risen by about 1.4 degrees Celsius over the past 50 years. 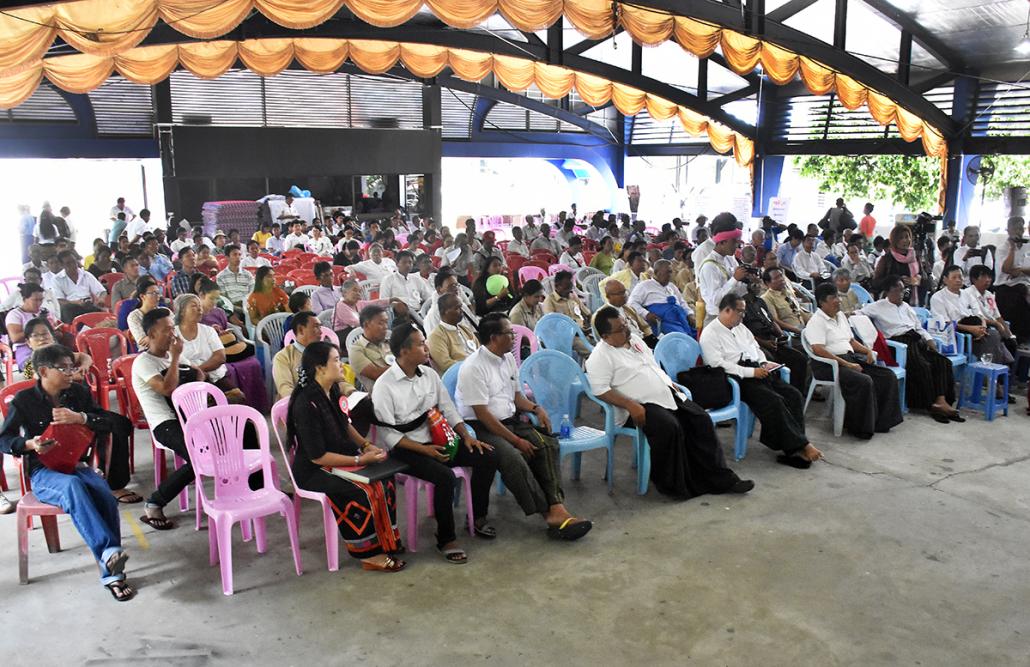 The meeting was held at the premises of Dr Kyaw Thu, a leading member of the Free Funeral Service Society. (Steve Tickner | Frontier)

Tun Lwin was among several prominent members of civil society who were chosen at the April 1 meeting to advise the 23-member working committee.

Ju, 60, who said she had always opposed the Myitsone dam, echoed concerns expressed by Tun Lwin in an appeal directed to the State Counsellor.

“I wish that our trusted leader will not be negligent and I remain very hopeful,” she told the meeting. Ju said she had observed that climate change had already affected the Ayeyarwady and that she was opposed to any dams being built on the river.

Activist monk U Dhama Sara said he had been involved in activities to oppose the dam since 2011, when he was released under pardon while serving an 85-year prison sentence for his role in the protests in 2007 known as the Saffron Revolution.

“The NLD as an elected government should listen to the people and keep the promise of what it said before,” he told Frontier on the sidelines of the meeting, alluding to the party’s disapproval of the project while it was in opposition. Dhama Sara said that governments that come to power but do not work for the people will not survive.

Nyo Nyo Thin invoked the emotion that many citizens feel for the Ayeyarwady when she referred to it as “mother”. The Ayeyarwady is not owned by the government but belongs to the people, she said to Frontier on the sidelines of the meeting, adding, “it is not something that the government or any person should sell”.

She acknowledged that the government was under pressure from China to resume the project, but added, “it should not sell the mother”.

The NLD government did not have to accept the flawed decisions of previous governments, Nyo Nyo Thin said.

“Myitsone represents the heart of the people. The elected government should not sell it, thinking they will be supported. That would be so wrong,” Nyo Nyo Thin added.

Daw Myint Myint Soe, who travelled from Hpakant in Kachin to attend the meeting, said the dam was a political problem that affected “everybody” in Myanmar.

Referring to a planned trip to China by Aung San Suu Kyi this month to attend a Belt and Road Initiative summit, Myint Myint Soe said she hoped that an agreement on the dam would not be signed during the visit.

Myint Myint Soe said she was not completely discouraged by the situation because there were examples of governments losing power when they made decisions that were strongly opposed by the people.

“The cancellation of the Myitsone dam is urgently needed,” she told Frontier. “I wish Daw Aung San Suu Kyi could stop this.”

Human rights lawyers and activists said on Monday that Myanmar is continuing to commit genocide against Rohingya Muslims in breach of orders by the UN’s.
BY AFP

In Myitkyina, the result hinges on who turns out to vote