In returning Myanmar relics to their native land almost two centuries after their capture, a New Zealand lawyer concludes a generations-old story of conquest, spoil and reconciliation.

THE CENTURY-and-a-half-old ceremonial candle stand, exquisitely moulded in the shape of a cobra, looked beautiful on the mantle of Major Donald Darroch.

The candle stand, along with Buddha images, ivory figurines and a handful of other ornaments, were the only tokens the Scottish soldier had to remember his gruelling march through tall grass and jungle against Burmese soldiers entrenched in Bago’s Shwemawdaw Pagoda on the foggy morning of April 21, 1852.

The better part of two centuries later, on another grey morning in July 2017, Major Darroch’s great-great grandson would also climb the hill to Shwemawdaw – this time in a car and armed with a camera.

But Mr Gareth Bodle’s family heirlooms, taken as spoils from the Second Anglo-Burmese War, did not quite make it back to the Shwemawdaw. The New Zealand lawyer and his family had already delivered them in a handover ceremony at the Yangon National Museum on July 20 – an act New Zealand ambassador Mr Steve Marshall said reflected Myanmar and New Zealand’s shared colonial heritage.

For Bodle, the ceremony was the end of a boyhood tale of far-flung adventure told through the shiny vase on the mantelpiece, the cobra-shaped cup filled with cigarette butts and the ivory seal his dad used for a paperweight.

“I had grown up with these stories; dad was a great storyteller,” Bodle told Frontier. “But I think the real significant thing was what dad had got from his uncle: the whole history, all the documents sent to and from the governor general and the Council of India from this campaign.”

Those documents allowed Bodle to almost perfectly recreate – from the initial bombardment of Rangoon to the assault on Pegu (Bago) – the 1852 invasion that wrested control of southern Myanmar from King Pagan and set the stage for Britain’s the eventual conquest of Burma.

“And every now and again there is a mention of Captain Darroch,” Bodle said (Darroch was later promoted to the rank of major).

The papers would lead Bodle, his wife Jennifer and teenage son Darroch to Bago and finally Mawlamyine in Mon State, following the footsteps of Donald Darroch and Bodle’s other great-great-grandfather, George Bodle, who also served in the 1852 campaign as an ensign.

Yet the documents could not tell the personal accounts of what Ensign Bodle might have seen as he sailed up the Pegu River, or what Darroch – then a captain – made of the strange treasures in the newly captured Shwemawdaw pagoda, most likely carefully arranged in offering to the Buddha.

“It seems as if the second major assault, on the Shwemawdaw, was a serious one,” said Bodle, describing the slow advance up a marshy slope under the lead hail of musket balls from the defenders who had fallen back to the pagoda compound. 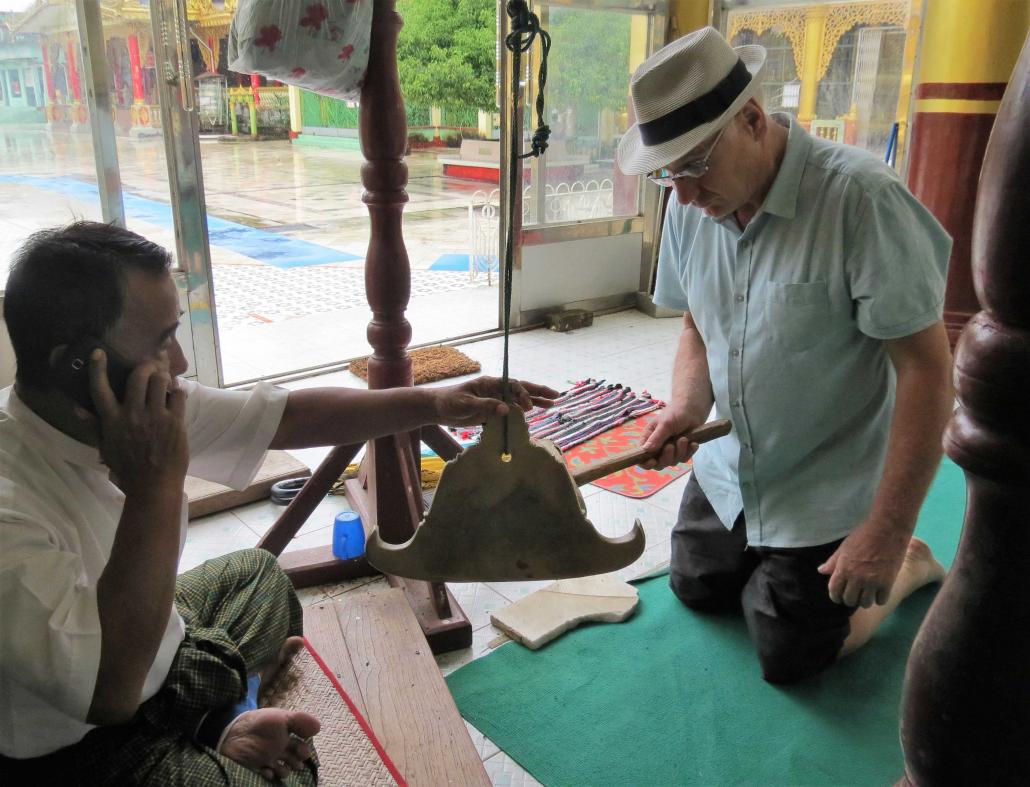 After marching into the Shwemawdaw, Darroch collected the snake candle stand, silver and ivory images of the Buddha, an ivory seal bearing a mythical hinthar bird, a metal vase, a ceremonial kyeezee gong and three ivory figurines.

“When they took the pagoda, basically they sacked it for souvenirs. Anything that could be put in a backpack and carried off was,” Bodle continued. “Some of the contemporary histories use the term ‘loot’.”

But Bodle is reluctant to use the word “loot”. His ancestors lived and fought with a different understanding of the legitimate spoils of war – on both sides.

Indeed, some of the artefacts – the snake candle stand and ivory figurines – likely originated in India and China, and may themselves have been captured by earlier Bamar kings, who had conquered and re-conquered Bago from Mon rulers for centuries by the time the British arrived.

And yet, Bodle went on, the British conquest and subsequent removal of treasures to London and other parts of the empire caused irreparable historical damage to almost all Myanmar peoples.

The Bodles felt that if returning the heirlooms helped to restore even a small piece of that stolen history, then it was their responsibility to do so.

“Our indigenous people are the Māori. They were colonised by England, and a lot of their sacred items were taken,” explained Jennifer Bodle, mentioning a collection of shrunken heads of the Māori and Moriori peoples that were returned to New Zealand from the United States Smithsonian Institute last year.

The process took five years of arduous negotiation and planning. Thus, Jennifer Bodle said, “We have some understanding of how important repatriation can be.”

“There are areas where we have considerable common ground,” Marshall told Frontier. “We are both agricultural economies, so we have an affinity for the land. We’re both multicultural societies with lots of different ethnicities, and we’re both ex-colonial countries.”

Indeed, he said, the New Zealand government was working on a cultural exchange program that would bring ethnic Māori to live and work in Myanmar.

Marshall said New Zealand has a growing movement towards historical restoration in general, not only its own. “It is that interest that was part of what made Gareth feel that he wanted to do the same here, to return these artefacts.”

Daw Ohnmar Aung, director of the Department of Archaeology and National Museum, hopes to see more such exchanges with distant countries whose histories have intertwined with Myanmar’s.

“We look forward to more cooperation in the future to promote our mutual understanding through this type of ceremony,” Ohnmar Aung said in a speech at the handover ceremony.

The morning after the ceremony, the Bodles continued the search for their own history in Bago, yet the artefacts did not return with them. The Department of Archaeology and the National Museum deemed that the items would be best protected and displayed in Yangon.

Gareth Bodle accepted their judgement. However, he wrote after visiting Bago: “I always suspected that the people, whoever they may be, at Bago had no idea we were in Myanmar or returning the artefacts removed from them two centuries before. I was right … [T]hey had no idea at all that this happened.”

Nevertheless, it was enough that the treasures are back on Myanmar soil and not on display on some far-flung mantelpiece.

“This is the very first time I have walked on the same ground as my forefathers,” Gareth Bodle said to journalists and representatives of the National Museum, the Yangon Heritage Trust and the New Zealand embassy. “I know throughout the time [the items] have been with my family, we have, in our ways, been good caretakers of them … The morning I walked in here was the first time I looked at them and knew that they belonged.”

Then Bodle handed the artefacts, arranged on a platter, to director Ohnmar Aung, paused for photos for a few minutes, and the story of Major Darroch finally came to an end.