Coffee catches on as a cash crop in the Shan hills

Coffee is catching on as a cash crop in the Shan hills, helped by programmes aimed at raising quality and finding international buyers.

Three judges stand around a table covered with 35 cups of coffee. Their faces are serious and focused as they prepare to take a sip – and then they let out a loud slurp. The sound is disconcerting for someone told since childhood that slurping is rude, but for a judge at a coffee cupping it’s a necessary skill: the vigour of the slurp is essential for dispersing the coffee throughout the mouth.

After each sample, the judges enter a rating into an app on their phone. At the end of the first round, there’s a discussion. “This one smelled a little bit of dry fruit, but then tasted not very special,” one says. The others agree. “This one is more complex,” says another judge, pointing to a different sample.

The judges are from the United States and Thailand, and are gathered in Pyin Oo Lwin, Mandalay Region, in late March to spend three days assessing samples entered in the fourth annual Myanmar Coffee Quality Competition by 88 producers.

“This competition is very important for the producers to know the quality of their coffee and to attract international buyers,” said one of the judges, Mr Matt Swenson, director of coffee at Chameleon Cold-Brew, based in Austin, Texas. “The winners will be the coffee ambassadors for the country.”

The competition is now in its fourth year, and the number of entries has increased over that time from 58 to 88. Although there were more samples that did not qualify as specialty coffee than in the past, Thai judge Ms Nisakorn Sinsawat said the overall quality of entries was higher. 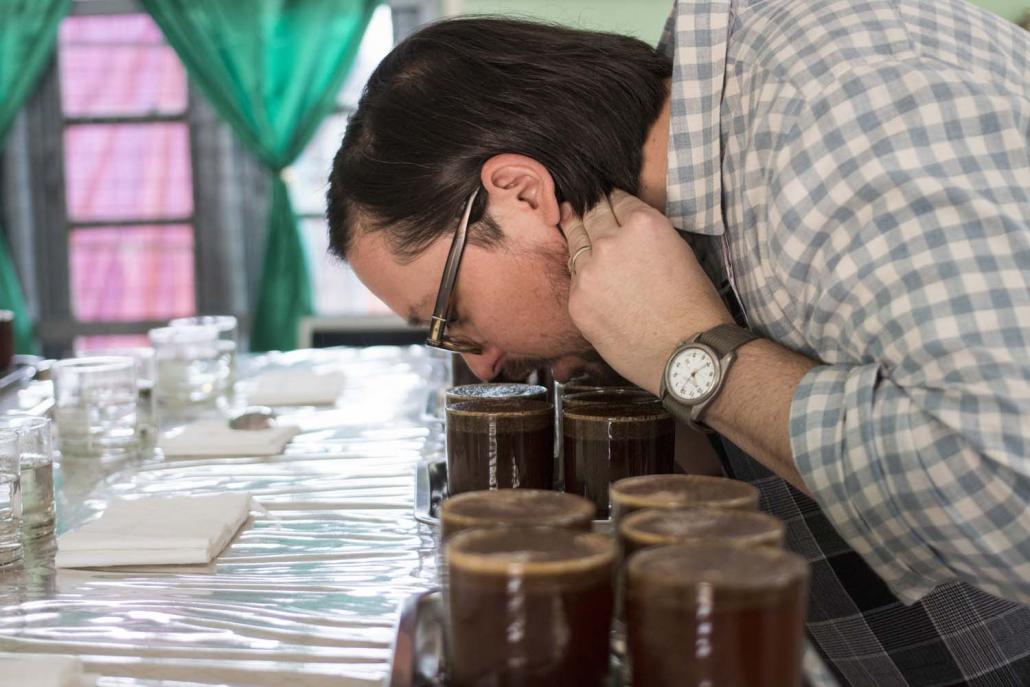 To qualify as high quality, or speciality, coffee, a brew must score higher than 80 points in an evaluation by professionally graded cuppers, or tasters. Quality is evaluated against such criteria as aroma, structure of the body, flavour, acidity and aftertaste.

“In the first year we had only a handful of very good speciality coffee and the quality of the samples was not as balanced,” Nisakorn recalled. “This year the samples are very clean.”

The competition was supported by a California-based NGO, Coffee Quality Institute, a branch of the global Speciality Coffee Association. It was organised by the MCA and Winrock International, an NGO funded by the US Agency for International Development.

Winrock, which is active in development projects in more than 40 countries and funded the participation of one of the competition’s three judges, aims to integrate smallholders and poor rural households in competitive commercial value chains. It is training growers to raise the quality of their crop to specialty grade, enabling them to sell their beans for a higher price and boost their earnings. The NGO then helps them to sell the specialty coffee on the world market.

“We create the linkage to the international market,” said Mr Timothy May, head of communication at Winrock Myanmar.

Access to markets is fundamental for the development of the industry. Although coffee has been grown in Shan State for decades, the lack of buyers in the past meant it was never grown as a cash crop, he said.

“[It] was a backyard crop and the farmers made no difference in quality,” May told Frontier. “They picked green, yellow, red and spotted cherries, so the quality was not very high.” 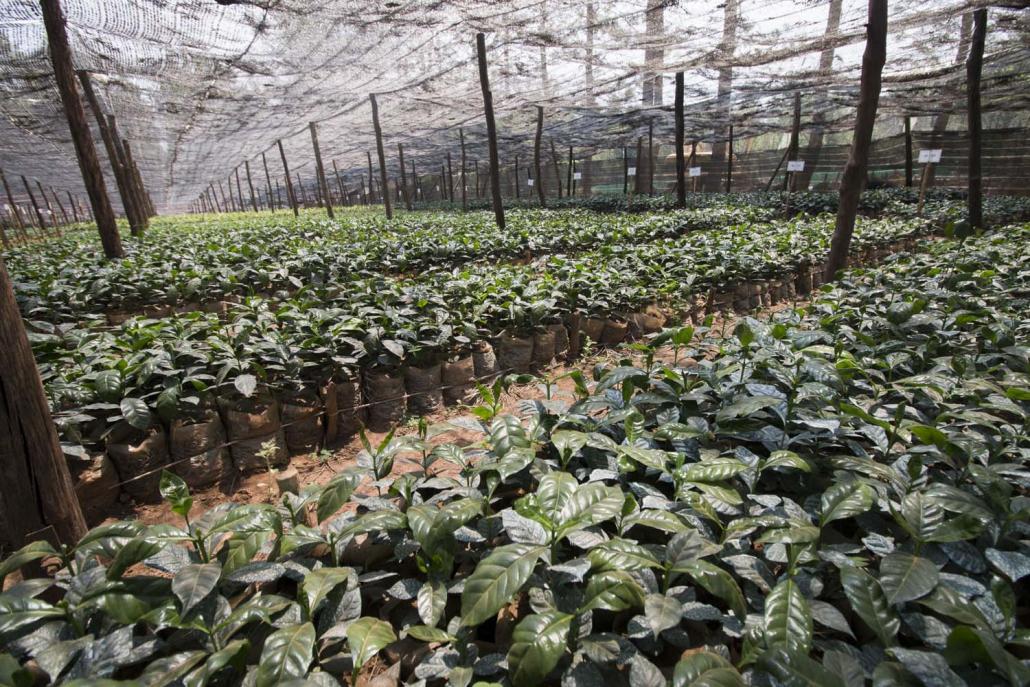 Of the two main varieties of coffee, Arabica is superior to robusta, with a sweeter, softer taste. It’s also harder to grow because it is fussier about climatic conditions. The fact that Arabica can be grown in Myanmar – plantations were established in Shan State during the colonial era but were later neglected – is one reason why it offers strong potential as a cash crop for smallholder growers.

The main goal of the Coffee Quality Competition is to identify specialty coffee that is likely to attract international interest. It’s a strategy that has proved successful for growers like U Thiha, 23, who has a plantation at Mogok in the northern mountains of Mandalay Region.

“I got my first international buyers from the United Kingdom, Singapore and Switzerland after I won the first prize for washed processed beans last year,” he told Frontier at the competition on March 23.

Winning the prize also helped to gain acceptance and respect from his family for his coffee-growing venture.

“Before, they thought I was wasting my time and wouldn’t make a profit,” said Thiha. His beans took out the same category again in March and he is hopeful of turning his first real profit from this year’s crop.

Sai Wan, 49, who farms 283 hectares (700 acres) at Pyin Oo Lwin, also appreciates the competition for its role in helping to improve the quality of his Arabica. He’s been waiting for years to have better prospects for his crop. His family was awarded land from the military government in 1999 to grow coffee but the project went nowhere.

“The government wanted to make a coffee city, but we had no market and no experience and could only sell our product for a very low price,” said Sai Wan.

The sales director of Myanmar Coffee Group, a processing company based just outside Pyin Oo Lwin, he’s also vice chairman of the MCA.

The association has about 200 members, most of whom own large plantations, but Sai Wan said the group was still not very active. Taking the organisation and funding of the Coffee Quality Competition in 2020 would be a challenge.

“This year we charged K30,000 [to assess] a sample and when Winrock gets out we will probably adjust it,” he said.

Fighting drugs and conflict with coffee

Raising the sampling fee risks excluding smallholders from the competition, however. Most of these are in southern Shan State, and some are former opium growers who have switched to coffee with the help of crop substitution projects backed by international agencies such as the United Nations Office on Drugs and Crime.

“A lot of farmers want to change to coffee, there is no doubt about that,” said UNODC country manager Mr Troels Vester. “They no longer want to have the problem of religious groups, the army, the police or organised crime coming in and cutting the opium and they get nothing,” he said, referring to official and unofficial eradication campaigns. Another reason was that opium poppy degraded the soil, he said. 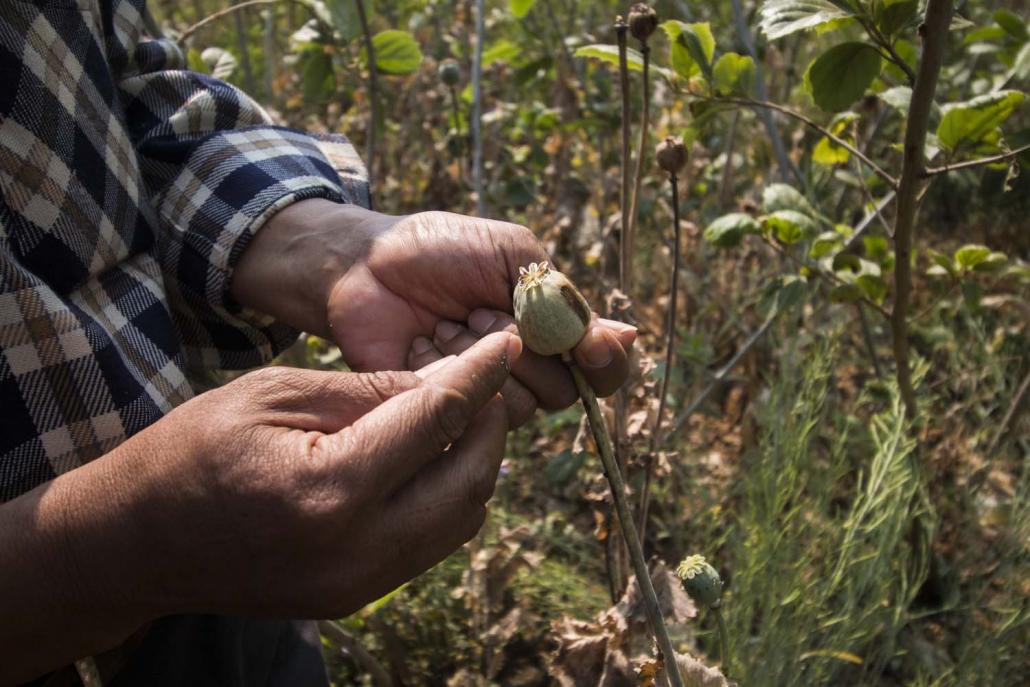 In coffee-growing areas where fighting continues between the Tatmadaw and ethnic armed groups, supporting production of the crop is also about building trust. The UNODC launched the coffee crop programme in 2014 after building ties with stakeholders and trying to establish different crops since 2009.

“In 2014, RCSS signed a nine-point agreement with us which asks us to start programmes in areas under its control,” said Vester, referring to the Restoration Council of Shan State, political wing of the Shan State Army-South.

The first coffee bushes were planted that year around Hopong, about 15 kilometres east of the state capital Taunggyi, and today about 1,050 farmers are participating in the project. Their fields cover almost 1,200 hectares. Vester describes the program as a “pilot”, noting that an area 40 times larger is being used for opium cultivation in Shan State.

The UNODC helps participating farmers crop half a hectare (just over an acre) of their land for coffee cultivation in the first year, and the same area again in the second and third years. The UN agency helps them get land use certificates for the fields, provides training and has established processing facilities.

Vester said transforming all the opium fields into coffee plantations was theoretically possible, but would cost about US$150 million and require an agreement among all political stakeholders.

As with the growers at Pyin Oo Lwin, the key issues for farmers in southern Shan are marketing and finding international buyers. Progress is being made. In 2017 a French company, Malongo, signed a contract with Green Gold, a growers’ cooperative established by UNODC, to buy its specialty coffee until 2022. 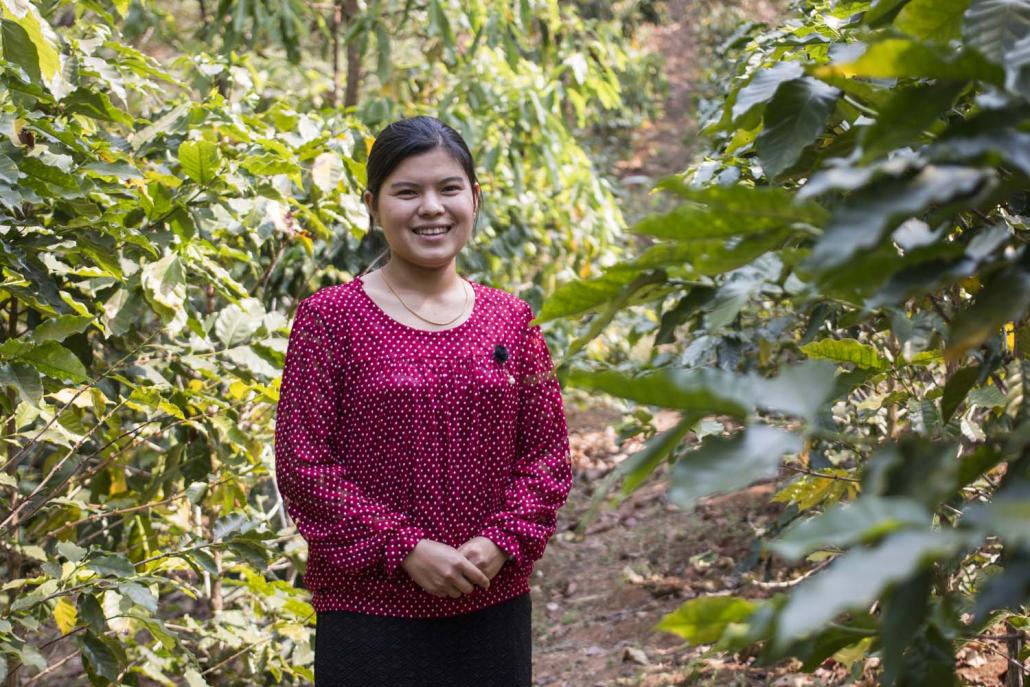 Nang Su Su Kyi is one of the farmers at Long Hay village – about 21 kilometres (13 miles) from Hopong and 40km (25 miles) from Taunggyi – who made the change from growing opium to specialty coffee in 2014. “My farm is near the village, so if the government came to eradicate the poppy I would be the first,” she told Frontier.

Su Su Kyi’s annual income from coffee is yet to match what she was making from opium, the raw material for producing heroin. She had earned at least K1 million from growing opium on 0.4ha, much more than the K400,000 she earned this year from her 0.5ha coffee crop. However, she is determined to stick at it, particularly given coffee yields increase with the age of the bushes and it is not as labour intensive as opium poppy.

Of the 120 households in Long Hay, 33 are growing coffee. Initially, though, only 18 signed up when the UNODC launched the project in 2014. It took three years for them to be able to harvest their first berries.

Some were reluctant because of a previous project in 2006 initiated by Yangon-based NGO Metta Development Foundation. At the time the only market was local and they received just K100 a viss (1.6kg, 3.6 pounds) for their crop; now they can expect to make about K800 a viss.

For many of the others, the risk of changing to a new crop was too high and trust in the foreign organisation was too low. Some villagers continue to grow poppy to maximise their earnings. “There was a rumour that the government would take the land as soon as the farmers changed to coffee,” farmer Nang Ohn, 35, told Frontier.

Seven of the farmers involved in the UNODC project have formed a Long Hay Coffee Group, which won third prize at the Coffee Quality Competition this year for its natural dried beans with a score of 86 points.

However, the farmers are yet to taste their coffee. They don’t have a roasting machine. 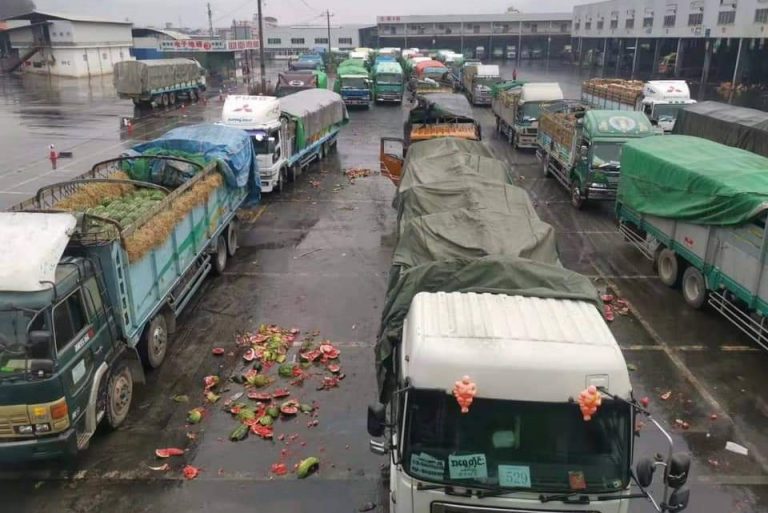 China’s decision to close all border trade gates with Myanmar is having a devastating effect on exporters, who had already been hit by restrictions introduced more than a year ago to counter COVID-19.
BY Frontier