The wide highways and manicured lawns of Nay Pyi Taw, purpose-built by generals under Myanmar’s junta, were dotted with red banners bearing Xi’s face and greetings in Myanmar and Mandarin ahead of the visit.

Xi is expected to ink a series of trade schemes as part of China’s global Belt and Road Initiative, which could change the face of Myanmar with a deep-sea port and high-speed rail line running from east to west.

But analysts also see the trip as symbolic backing for former rights icon Aung San Suu Kyi as Myanmar reels from international blowback over its treatment of Rohingya Muslims.

After a welcome ceremony and dinner on Friday, Xi will sit down with Aung San Suu Kyi and army chief Senior General Min Aung Hlaing on Saturday.

Beijing wants to nail down the port, rail link and several building projects in the emerging democracy despite lingering wariness in Myanmar over China’s influence. 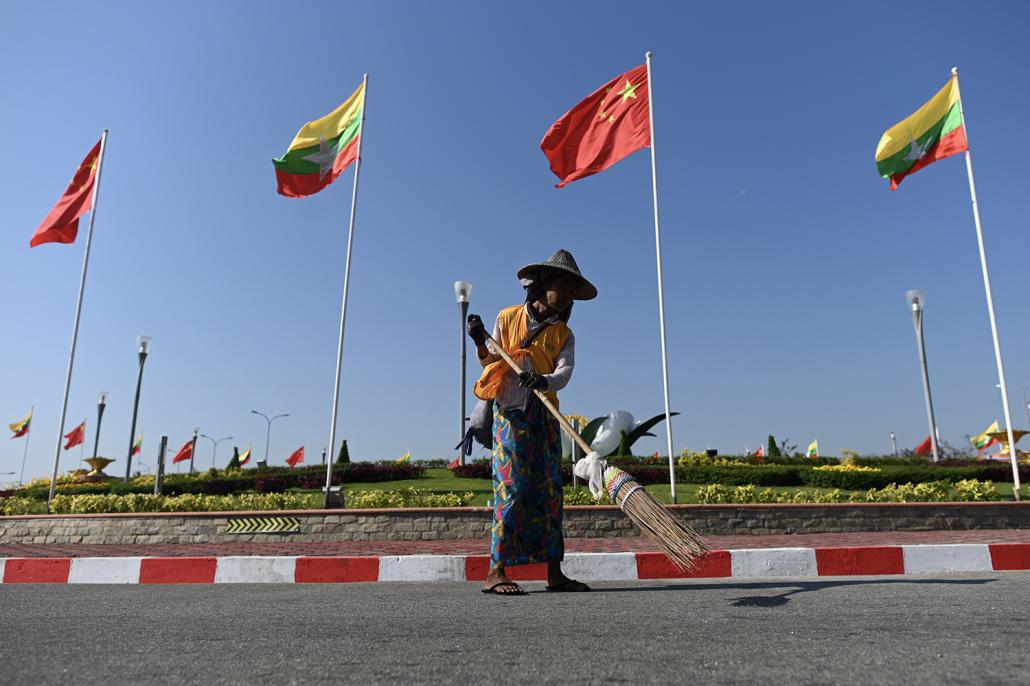 A worker sweeps the road at a roundabout ahead of the visit of Chinese President Xi Jinping in Nay Pyi Taw on January 17. (AFP)

Aung San Suu Kyi made a rare visit to Kachin State on the border with China ahead of Xi’s visit.

Kachin is the site of a planned Chinese-backed 6,000 megawatt dam that was stalled in 2011 in the face of vociferous criticism.

Activists are expected to protest on Saturday against any reinstatement of the project at the Chinese embassy in Yangon.

But China remains an important economic lifeline for Myanmar, with billions in bilateral trade.

The relationship also lends other benefits. In an op-ed in Myanmar’s state-run media, Xi said China supports Myanmar in “safeguarding its legitimate rights and interests and national dignity”.

China has been one of the few major powers to support Myanmar as it faces international condemnation over its 2017 expulsion of the Rohingya, which has prompted allegations of genocide at the UN’s top court.

The campaign occurred in Rakhine State, where Beijing is financing the US$1.3 billion port as well as a special economic zone beset by criticism.

Locals on the ground at the sprawling infrastructure projects are concerned they will reap none of the benefits but suffer all of the environmental and social impacts.