YANGON — The Yangon Region government has blocked foreign companies from operating fuel stations in the country’s largest city because their corporate practices are “not compatible with our business culture”, chief minister U Phyo Min Thein says.

Speaking at a press conference on Wednesday, the chief minister also said the regional government hopes to expand its network of Yangon Petrol stations, which some have argued are anti-competitive.

While the launch of Yangon Petrol has coincided with the regional government ban on foreign fuel stations, Phyo Min Thein offered a different – and seemingly bizarre – justification for keeping them out of the market.

In Myanmar, he said, it was common for distributors to provide fuel to local stations with no upfront charge and then collect payment once it has been sold.

If foreign companies were let into the sector, they would demand payment from locally owned stations immediately, he said at the press conference, which was held to discuss the activities of his government over the past three years.

“When they [foreign companies] sell something, they want the money immediately. They don’t want to wait to collect it later,” he said.

Phyo Min Thein said the regional government instead wants foreign companies to invest only in fuel storage. A group of local businessmen would soon meet officials from PTT in Thailand to discuss potential cooperation in this area, he added.

Since taking office, the Yangon Region government has blocked the opening of most new fuel stations in the city and instead championed the controversial Yangon Petrol model to reduce retail fuel prices.

These policies have undermined Union government efforts to open up the sector to foreign investment.

In April 2017, the Directorate of Investment and Company Administration lifted investment restrictions on the fuel import, distribution and retail business. Foreign companies had previously been required to partner with the government if they wanted to enter these sectors.

Despite strong interest from foreign companies including Total, Shell, Puma and PTT, there has been almost no foreign investment in the sector.

In April, Chinese state-owned energy company CNPC announced it had invested in Shwe Taung Energy, but acquired only 35 percent so that the retailer could remain a local rather than foreign company. Shwe Taung Energy’s existing outlets will gradually be rebranded as Singapore Petroleum Company, or SPC, a CNPC subsidiary.

As Frontier reported recently, state intervention has been one of the key reasons that foreign investors have decided to remain on the sidelines.

Mr Jaume Marques, an advocacy officer for energy at EuroCham, the European Chamber of Commerce in Myanmar, said government efforts to reduce retail prices had made the retail sector less attractive to investors, he said. 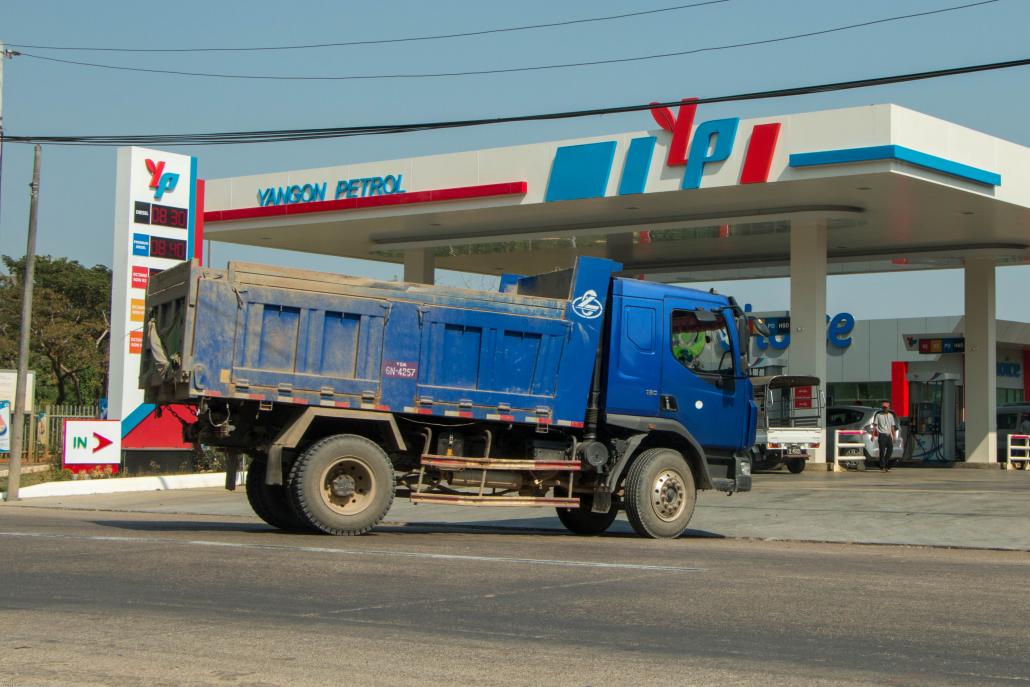 Under the Yangon Petrol model, the regional government leases land in prime locations to a private company, Yangon Petrol Co Ltd, at very low rates with the understanding that it will then sell fuel to customers at a low price.

The three Yangon Petrol stations that have already opened are undercutting other retailers by around K50 a litre, which Phyo Min Thein said showed the initiative had been a “success”.

Phyo Min Thein said the regional government wants to open more Yangon Petrol stations around the city, possibly under a franchise model to allow other businesspeople to participate.

Five of Yangon Petrol’s six directors are from another local fuel retailer, PT Power Group, which operates stations under the PT Power and Best Oil Company brands. These investors first sought to lease land for the Yangon Petrol venture in early 2018 and documents leaked in January of this year show that five sites were leased to the company in May 2018.

The documents show that the regional government planned to lease 26 sites around the city to the company, although it is unclear whether all of these leases have been finalised.

Speaking on Wednesday, Phyo Min Thein confirmed the current lease rates were K2,000 to K4,800 for one square foot, and added that the government would consider reducing land lease prices even further for future Yangon Petrol outlets. The government has not confirmed the length of the leases but they appear to be long term, in which case property industry observers say they could be 30 or 40 times below the market rate.

The chief minister also threatened to shut down private stations that the government believes are selling fuel at unreasonably high prices.

“I would like to ask them [fuel retailers] why they are selling fuel with high prices even though [Yangon Petrol] is selling it at low prices,” Phyo Min Thein said.

He said it was important that the government took action to ensure fuel prices remain low, pointing out that the September 2007 protests were sparked by fuel price hikes, and that he wanted to replicate the Yangon Petrol model around the country.

This already appears to be in progress, with some of the investors in Yangon Petrol having established companies named Mandalay Petrol, Shan Petrol and Mon Petrol.

But the Yangon Petrol model has also been widely criticised. U Win Myint, a fuel importer and retailer who is secretary of the Myanmar Petroleum Traders Association, said the leasing deal was “anti-competitive” as it gave the company an unfair advantage over its competitors.

Others have complained about the secrecy of the arrangement between the regional government and Yangon Petrol, which only came to light because the documents were leaked online.

Lawmakers from Phyo Myin Thein’s own party, the National League for Democracy, have taken aim at the initiative and the chief minister’s lack of transparency.

“We don’t want business to be done like it [was done] under the previous government and the military,” Daw Sandar Min, the representative for Seikgyikanaungto-1, who chairs the Yangon Region Hluttaw Finance, Planning and Economic Committee, said in February. “We have to fight it.”

Sandar Min told Frontier on Thursday that although she had submitted a question about Yangon Petrol to the regional assembly, the speaker had not yet allowed it onto the agenda.

It is also unclear whether Phyo Min Thein violated presidential notification 1/2017, under which government bodies are required to conduct a tender for most procurement and the sale or lease of state assets.

The tender requirement does not apply to public private partnerships but the exact structure of the deal between the Yangon government and Yangon Petrol remains unclear.

Eleven Media has reported that applications for permission to open the fuel stations state that the applicant is “Yangon Petrol Company Limited, in cooperation with Yangon Region government for mutual benefit”, indicating that the deal might be some form of public private partnership.

Phyo Min Thein has previously said the regional government instead receives 20 percent of the profit from Yangon Petrol. He confirmed on Wednesday that it had received some profit already, but did not reveal how much.