Celebrating the manau, and a Thai king’s gift

In northern Thailand, a Kachin village dances the sacred manau to celebrate the gift of land granted to them by a Thai king.

The heavy bass of drums reverberates through the air as the men and women lining the paved road, dressed in their best traditional clothing, begin to sway to the beat.

“I’ve been waiting to do this for years,” said one woman, nudging her way into the line between two other swaying women. “This is one of the most important parts of the whole ceremony.”

Moments later, a Thai military officer walked along the line of dancers, shaking hands and posing for photos until he reached a podium in the shadow of the sacred manau poles, a parade of flute players and dancers following behind him. After a few speeches and endless clapping, the festival is set to begin.

Although the vast majority of Kachin people live in Kachin and northern Shan states, there are also significant communities in China and India. The total Kachin population is estimated at nearly two million. 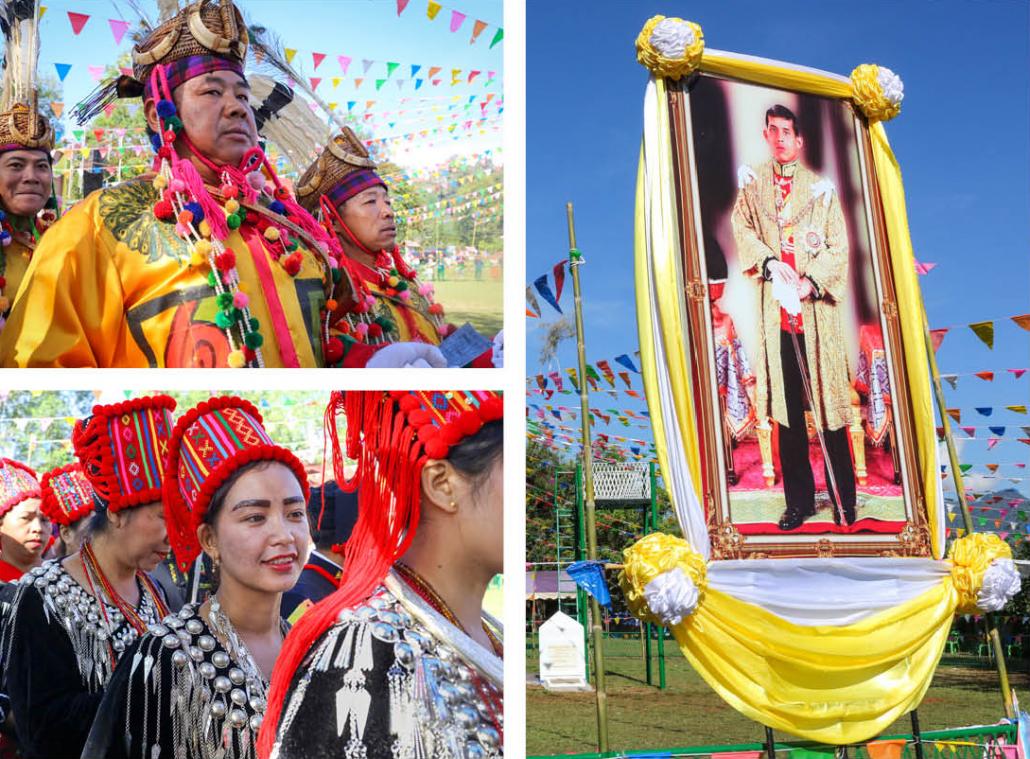 With its roots in the animistic heritage of the now mostly Christian Kachin, the manau dance is performed at times of celebration. (Victoria Milko | Frontier)

The only Kachin village in Thailand, Banmai Samakki, is in Chiang Mai Province, just a few kilometres from the border with Myanmar. Although set in a tranquil mountain valley, the village has a turbulent history, with its founders having fled the violence of their generation.

Before independence from Britain in 1948, General Aung San negotiated the Panglong Agreement with Kachin, Shan and Chin leaders. Signed in 1947 on February 12 – a date celebrated annually as Union Day – the agreement accepted in principle “full autonomy in internal administration for the Frontier Areas”.

Independence brought democracy under a government headed by U Nu but it also triggered a revolt by the Karen and the communists. Frustration and resentment toward the new government also simmered among ethnic groups that had signed the Panglong Agreement. The outbreak of armed resistance by the Kachin Independence Organization in 1961 triggered fighting that continued until it signed a bilateral ceasefire with the Tatmadaw in 1994. The truce collapsed in June 2011 and the resumption of fighting has displaced more than 100,000 people.

Divisions in the early years of Kachin resistance fuelled internal disputes that sometimes ended in violence.

“I had to run away from the Kachin Independence Army and the communities they were aligned with,” said Khawng Hawng, one of the founders of Banmai Samakki, which roughly translates as “New village of harmony”.

In 1975, Zaw Seng, who had founded the KIO in 1961, was assassinated by another member of the KIO at a base on the border between Burma and Thailand. The KIO had been anti-communist but after Zaw Seng was killed it allied with the Communist Party of Burma. Those who supported Zaw Seng, including Khawng Hawng, remained on the Thai side of the border because they feared for their lives if they returned to Burma.

The group established a community in the jungle but after making their situation known to the Thai government in 1982, King Bhumibol Adulyadej granted the refugees 640,000 acres (about 260,000 hectares), resulting in Banmai Samakki acquiring official status. 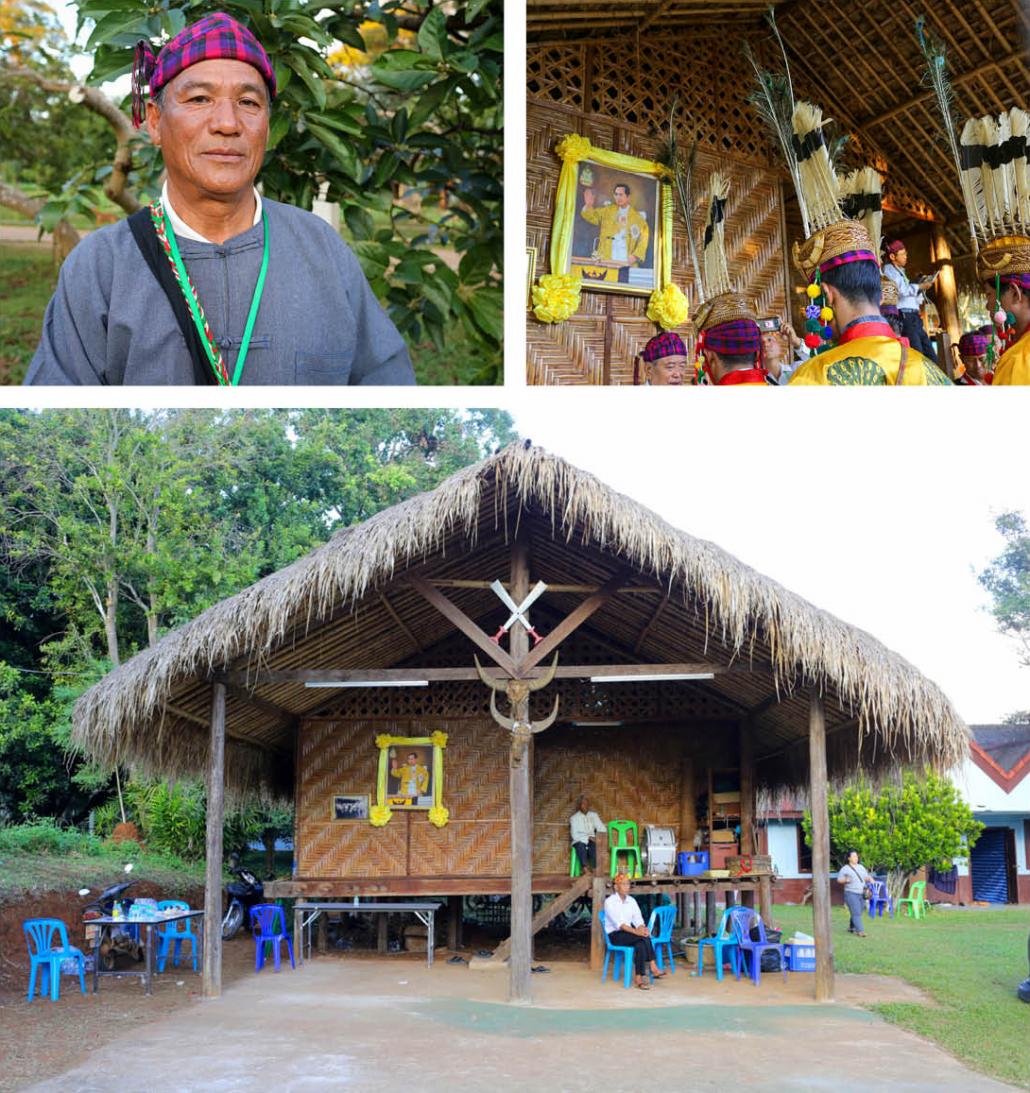 Khawng Hawng (top left), one of the founders of Banmai Samakki. The village was established after King Bhumibol Adulyadej granted 158 acres to the Kachin refugees. (Victoria Milko | Frontier)

Not long after, officials involved in the development projects supported by Thailand’s royal family visited to see if they could be of assistance.

“They asked me, ‘What is most popular and important culture in your Kachin society?’” said Khawng Hawng. “And I answered that the most important thing to us is the manau.”

With its roots in the animistic heritage of the now mostly Christian Kachin, the manau dance is performed at times of celebration, such as after the harvest or victory on a battlefield. Lines of dancers led by a colourfully dressed dance leader, called naushawng, coil and weave around the manau poles, dancing to the beat of the traditional drums in the centre.

In response to Khawng Hawng’s requests, the royal development projects donated 60,000 baht to the village and work began on the manau. To show appreciation, the people of Banmai Samakki began dancing the manau every second year to mark King Bhumibol’s birthday on December 5. The recent performance was the first since 2014, as the king died in 2016. 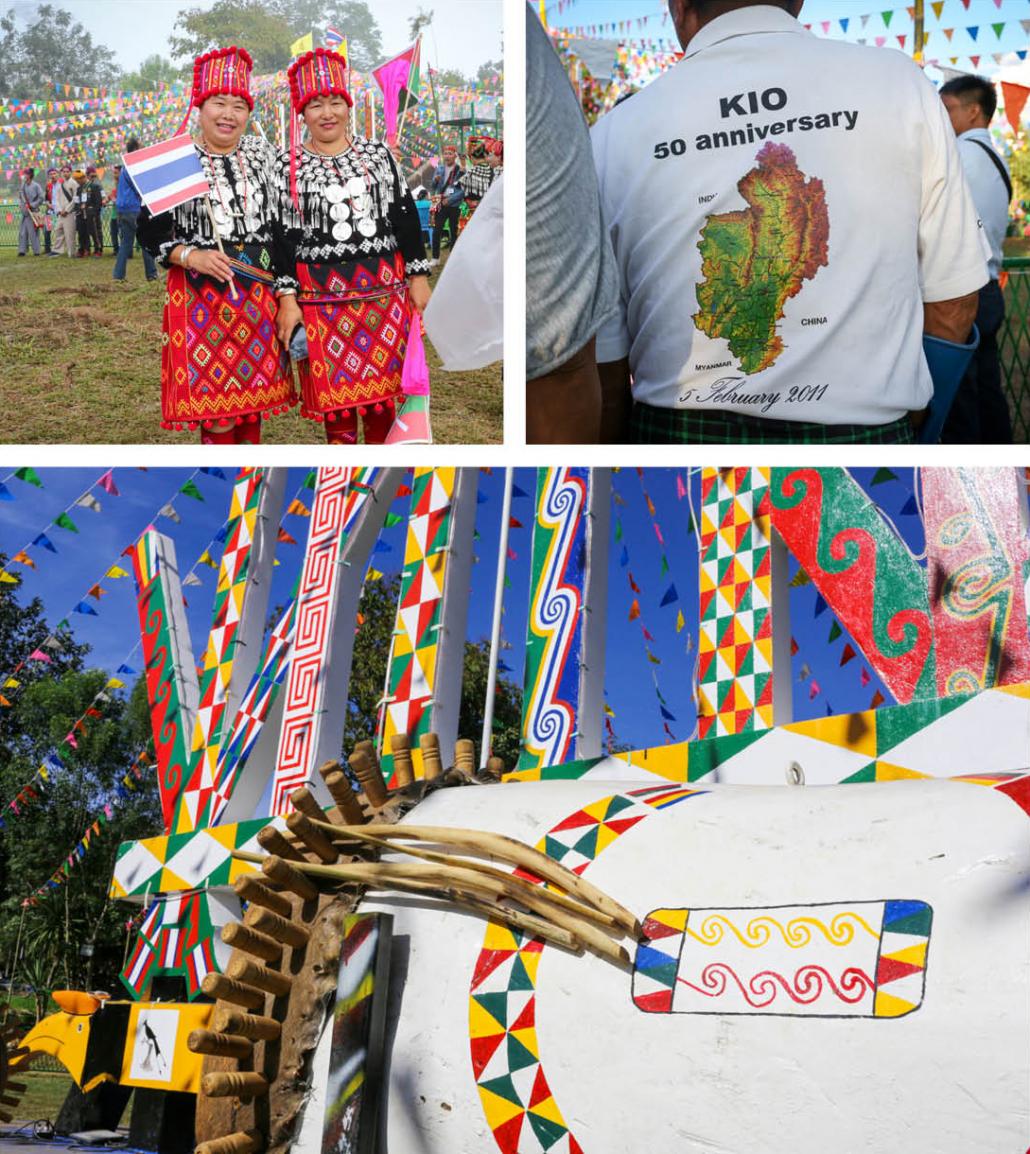 On the surface, the mood is lighthearted and joyous but between the handshakes and the laughter there is sadness and concern over continued conflict in Kachin and northern Shan States. (Victoria Milko | Frontier)

The reinstatement of the manau had the normally quiet village hosting visitors from Myanmar, China and other parts of Thailand. Trademark red, silver and black Kachin outfits dominated the crowd, but other traditional attire included Rawang hats adorned with birds’ heads and animal parts, and Akha headdresses with silver coins and colourful tassels. Pop-up vendors sold diamond-patterned fabric, amber bracelets and the occasional piece of jade, which are all trademarks of Kachin culture and adornment.

The food was as diverse as the crowd. Mohinga, Thai larb gai and Kachin beef salads lined tables for hungry guests. When a snake made an unwelcome appearance, a vendor killed it with his n’htu, a traditional Kachin sword.

“I hope he throws it on the grill,” joked a man who had travelled from the Kachin State capital Myitkyina for the event.

On the surface, the mood seemed to be light-hearted and joyous, as is often the case when the Kachin get together. Between the handshakes and laughter, though, sadder sentiments were being shared.

“Dancing the manau in Myitkyina doesn’t feel right,” said Daw July Hpaw, another resident from the Kachin capital at the event. “With everything going on in Kachin, it just doesn’t feel very respectful.” 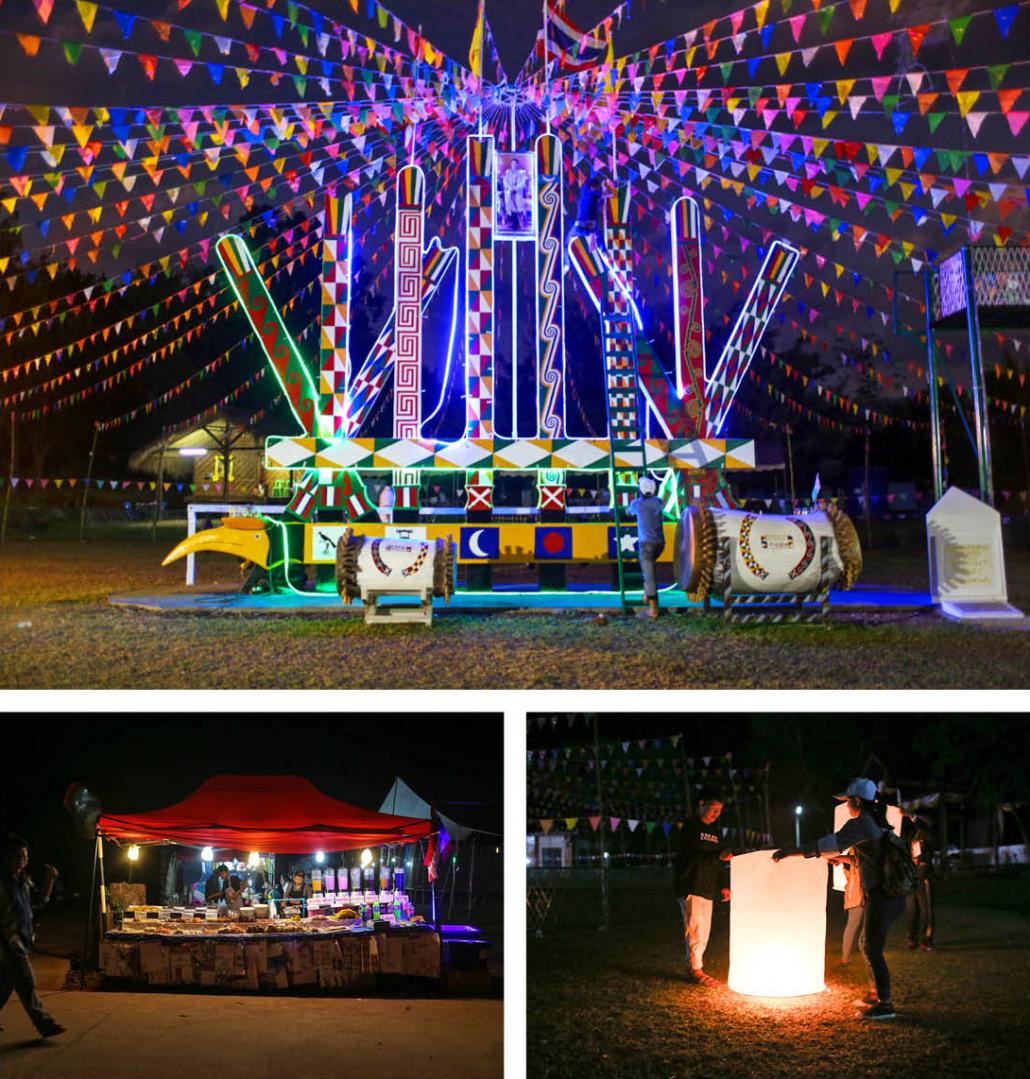 Many Kachin in Myanmar share her opinion. Manau festivals in Myitkyina are subject to a heavy Tatmadaw presence, which the government says is necessary for “security” reasons. Another source of tension is that the park where the manau performance is held is owned and managed by the government and this has led many to boycott the event.

The grim situation in Kachin and Shan states figured heavily in the report issued in September by a United Nations Fact-Finding Mission that focused mainly on the situation in Rakhine State, where it said the Tatmadaw had acted with “genocidal intent”. Gross human rights violations and abuses committed in Rakhine, Kachin and Shan states were “shocking for their horrifying nature and ubiquity” and for “the level of denial, normalcy and impunity that is attached to them”, the report said.

The fighting persists in Kachin, fuelled partly by a battle for control over the state’s abundant natural resources, and civilians continue to be caught in the middle.

But for the two days of the manau in Banmai Samakki, the drumbeats echoed through the village, and even those not in the dancing lines were swaying to its beat.