Catching up with the ‘lowlands’: education in the Naga hills

Improvements in education since 2011 are bringing positive change for children in the remote hills of the Naga Self-Administered Zone.

GROWING UP in the remote Naga hills shortly after Burma gained independence from the British, there was almost no access to education for people such as Eno Jüvsügmiu Makury.

However, Jüvsügmiu Makury had more opportunities than most of his fellow Naga to attend school. His parents passionately believed in education’s ability to change lives for the better, so they sent him to study until Grade 3 at a school in Htamanthi.

The town on the Chindwin River is nearly 700 kilometres by road northwest of Mandalay and on the edge of what is today the Naga Self-Administered Zone. The SAZ borders India and is comprised of three townships – Lahe, Leshi and Namyun – in Sagaing Region.

For Naga of Jüvsügmiu Makury’s generation, there were few opportunities to continue studying beyond Grade 3. But he had a stroke of luck. In 1953, he benefitted from an initiative by then-Prime Minister U Nu to bring people from remote areas of the country to Rangoon to continue their education. Jüvsügmiu Makury studied at the Central High School in the capital’s downtown Latha Township, today known as Basic Education High School 1 Latha.

Coming from one of the country’s most isolated areas, Jüvsügmiu Makury said he expected to be impressed by the country’s capital. Instead he found a city that had been devastated by World War II and was also being affected by the fighting against the Communist Party of Burma and the Karen National Defence Organisation, the forerunner of the Karen National Liberation Army.

“In those days, we heard [Rangoon] was the capital of Burma, the most famous city in Burma,” he told Frontier at his home in Leshi, high in the Naga hills. “So I was really longing to go there and see what it was all about. But when I reached Rangoon in those days, it was very basic.”

Jüvsügmiu Makury soon adapted to living in Rangoon and devoted himself to his studies. In 1959, he and a friend became the first Naga in Burma to pass the matriculation exam. A devout Christian, Jüvsügmiu Makury said he thanked God for his achievement.

After graduating, he first worked as a teacher and then ran his own business. Later he worked with the Burma Socialist Programme Party, the only party allowed to operate after General Ne Win seized power in a coup d’etat in 1962, and with the BSPP’s successor the National Unity Party, which lost the 1990 election to the National League for Democracy.

Jüvsügmiu Makury also served for years as the secretary of the Makury Naga Tribal Council, which represents the interests of one of the 10 Naga tribes that live in Myanmar. Today, the octogenarian enjoys a peaceful retirement at his home in Leshi, where a favourite pastime is reading books.

He welcomes the huge improvement in access to education since his childhood, when there were few schools in the area.

“A lot of changes have taken place compared to that time and now,” he said. “Now the government has taken many initiatives, and there are a lot of changes taking place in the education system, and there now many educated people in this township.” 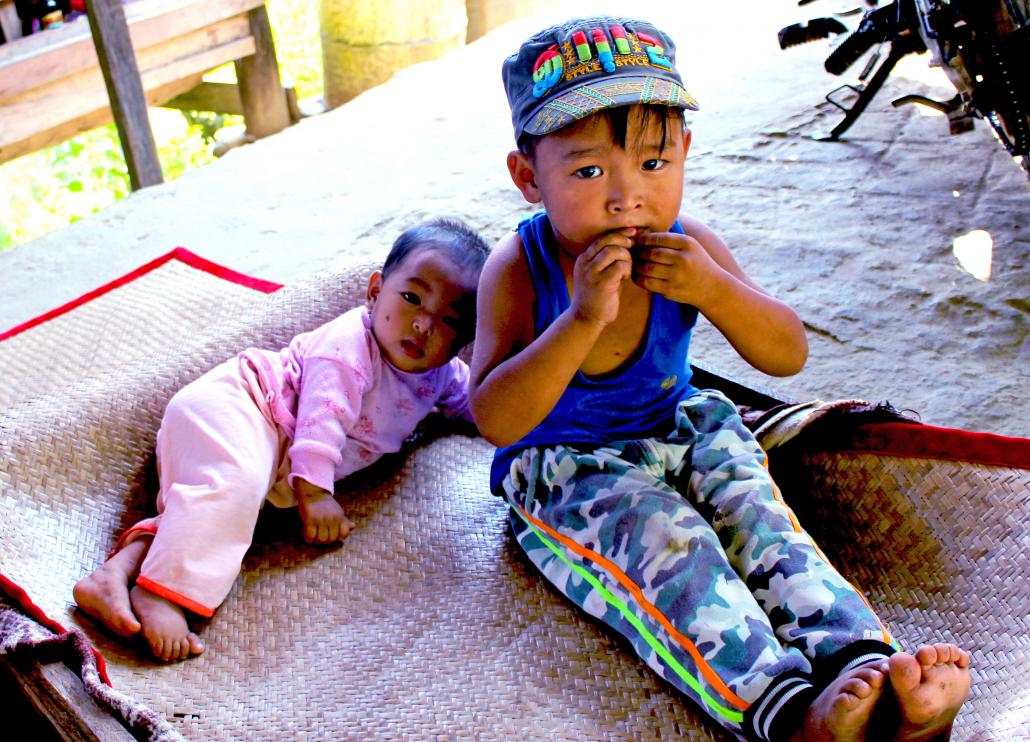 Despite reforms in recent years, there are significant shortcomings in the education sector in the Naga SAZ. (Oliver Slow | Frontier)

Education levels in the Naga SAZ still lag far behind most other parts of Myanmar. The 2014 census, for example, found a literacy rate of 66.7 percent in Leshi Township, compared to 20.6 percent in neighbouring Lahe (the average for Sagaing Region was 93.7 percent).

But Leshi residents told Frontier that education in the SAZ had improved significantly in recent years, particularly since economic and political reforms began in 2011 under the Union Solidarity and Development Party government of President U Thein Sein.

The USDP government significantly raised education spending and the ruling National League for Democracy administration has also made it a priority. About nine percent of the national budget is allocated to education, up sharply from little more than one percent under military rule.

Improvements in Leshi include new schools, together with road upgrades so that students can more easily reach them. Naga interviewed by Frontier said another positive change had been the introduction of some Naga-language instruction in government schools, as part of reforms implemented under the 2014 National Education Law. As well as allowing regional or state governments to introduce teaching of ethnic languages and literature “starting at the primary level and gradually expanding [to higher grades]”, the law also allows ethnic languages to be taught “alongside Myanmar as a language of instruction at the basic education level”.

U Ko Lay Win, director general of the Department of Basic Education under the Ministry of Education, said the teaching of ethnic languages was permitted in primary schools after 2014 to encourage ethnic groups to “embrace the constitution”. Fifty-five minority languages are being taught in schools around the country, he added. “We allowed [regional governments] to each draw-up a regional curriculum for grades 1, 2 and 3. If they want to include [minority] languages, they can.”

Despite the increased spending on education, the situation for teachers working in the SAZ remains challenging.

Eli Khree Fein Tei, 29, became a teacher in the SAZ 10 years ago. Her decision to become a teacher was unusual: it was to protect her family from the effects of conflict. As a child growing up in the Naga hills, she remembers her father being forced to work as a porter for the Tatmadaw when it deployed troops near her village.

“If the military had a column [in the area], my father had to follow them,” said Khree Fein Tei. “They often called villagers as porters. If they rested [near] Htamanthi, I had to go to that place with a rice box for my father. I was worried until he returned home.”

She said that the village head would often select villagers to act as porters if they did not have family members who worked for the government.

Today Khree Fein Tei, who spoke to Frontier while visiting Leshi for a teacher training programme organised by the government, is the principal of a primary school at Shera village, about 18 kilometres (12 miles) from Leshi town.

She agreed that the education system in the SAZ had improved in recent years. However, she said there were still many difficulties, particularly a shortage of staff.

“Sometimes it’s difficult for us because we do not get much salary and have to use our family [money],” she said. “But then we want [the students] to be happy and come to school.”

The education ministry’s Ko Lay Win agreed that there is a shortage of teachers in border areas.

He told Frontier that teachers, most of whom come from outside, typically “serve one year in remote areas, [then] they transfer to other places,” He said, “If we appoint local residents, they stay longer, so we are finding local residents.”

Students also face challenges after they finish secondary school. For those who want to further their education, it’s common to study in Monywa, which is about 500 kilometres away and can take several days to reach.

Economic growth in the SAZ has been relatively slow, so there are also few jobs for graduates outside the civil service. Many Naga who do get an education migrate permanently to other cities or even abroad, with India a popular destination.

“A few people who get a good education from the government system are able to get government jobs, but the rest of the people, most of them rely on the fields and cultivation for their survival,” said Eno Lengsühthong Makury, chairman of the Makury Naga Tribal Council in Leshi.

“The government is trying to develop the roads and bridges, the infrastructure,” he said. “But this has only arrived to our land recently, so we have to progress more in order to catch up with the way of life of the other people living in the lowlands.”

TOP PHOTO: A village in Lahe Township, which has among the lowest literacy rates in Myanmar. (Victoria Milko | Frontier) 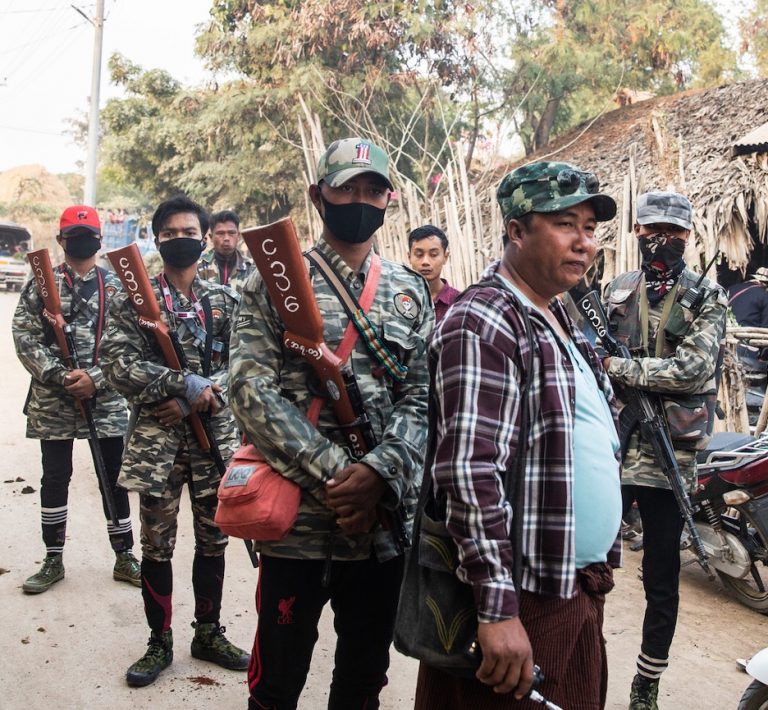