A Burmese-language newspaper launched in California a decade ago is attracting more feedback from readers who were averse to its political coverage before 2010.

California is home to an estimated 30,000 Burmese, the largest concentration of the Myanmar diaspora in the United States. Although many have resettled in the US to escape the political situation at home, the Californian Burmese are not known for their activism. This was evident in 2007 during a campaign outside Los Angeles City Hall to gather signatures for the release of Daw Aung San Suu Kyi, who was under house arrest, and other political prisoners.

“At that time, even though there are about 10,000 Burmese in Los Angeles how many do you think came to the demonstration? Only about 20 people,” recalled Ma Swe Swe, 38, editor of Myanmar Gazette, a Burmese-language monthly newspaper published in Los Angeles.

Ma Swe Swe, a medical graduate and part-time journalist who used the pen name Nyo Khet Kyaw when she was writing for publications in Myanmar, arrived in Los Angeles in 2005 to help care for her aunt. She soon married another Myanmar journalist, U Gyi Soe, and together with a financial backer they launched the Mandalay Gazette in July 2006. It was renamed the Myanmar Gazette in October 2013, when their former backer pulled out. 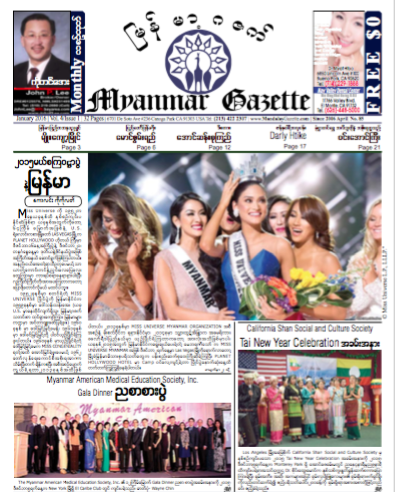 The January 2016 issue of the Myanmar Gazette.

It hasn’t always been easy to run a Burmese newspaper, even in the land of the free. “Before 2010, Burmese people here were very scared to talk about politics,” said Ma Swe Swe. “Even though we gave the newspaper away for free, they would ask me, ‘Is there any political news in this? If so I don’t want to take it,’” she said. “But after 2010 there was more interest. The silent people came out and they were more interested in our newspaper. Now we get a lot of feedback.”

Myanmar have been fleeing their motherland since 1962 when former strongman General Ne Win seized power in a military coup and launched the country on its disastrous Burmese Way to Socialism. The ideological shift allowed the state to seize the properties and businesses of wealthy Burmese, mainly of Indian or Chinese descent. Many decided to leave, mostly to more hospitable Asian countries but also to the US, the fabled land of opportunity. California, with its mild weather and long history of Asian migration, has always attracted overseas Burmese.

“Before 1988 most of the overseas Burmese in LA were Chinese-Burmese, who came here during the Ne Win era,” said Ma Swe Swe, whose husband compiled an informal census of overseas Burmese in 2010. The migrant mix changed after the national uprising in 1988 was brutally crushed by the military, leaving an estimated 3,000 dead and forcing hundreds of student activists to flee to neighbouring Thailand. In the aftermath of 1988 many political activists were accepted for resettlement in the US, and later, as Washington tightened sanctions on the former military regime, it granted asylum to thousands of Karen, Kachin and Chin living in refugee camps along the Thai-Myanmar border.

The Myanmar diaspora in the US has spread well beyond Los Angeles. In California, San Diego has become a major hub for Karen immigrants, while Culver City has a large population of Myanmar Muslims. The second largest concentration of overseas Burmese is in Indiana State. It is home to an estimated 19,960 overseas Burmese, many of them Chin and Karen resettled from Thai refugee camps between 2000 and 2015, shows data compiled by the Burmese American Community Institute. The two cities in Indiana with the biggest Burmese populations are Fort Wayne and Indianapolis. New York is another hub for overseas Burmese.

The Myanmar Gazette is the only Burmese-language newspaper serving the overseas Burmese community in the US.

“The Myanmar Gazette is distributed not just in LA, but also in the San Francisco Bay area and we send it to New York and Fort Wayne, where the Burmese Advocacy Center is based,” Ma Swe Swe said. She estimated the newspaper’s circulation at 12,000 copies, with more than 1,000 online subscribers to the digital edition, which is handled by her husband, U Gyi Soe.

Besides providing updates on community events in California, the newspaper has been focusing on the political and economic transition in Myanmar during the past five years. Ma Swe Swe has also been using the paper to challenge some of the more “extreme” beliefs of the overseas Myanmar community, which are little different to those in Myanmar. “We need to change, not just the political situation, but we need to change our extreme traditional beliefs, our extreme religious beliefs,” Ma Swe Swe told Frontier.

“Before 1988 most of the overseas Burmese in LA were Chinese-Burmese, who came here during the Ne Win era,” said Ma Swe Swe. The migrant mix changed after the national uprising in 1988 was brutally crushed by the military, leaving an estimated 3,000 dead and forcing hundreds of student activists to flee to neighbouring Thailand.

In her coverage of the divisive Rohingya issue, Ma Swe Swe has sought opinions from the predominantly Myanmar Muslim community in Culver City. “But the other Burmese communities, they still don’t like Muslims,” she acknowledged.

In fact, the overseas Myanmar community in the US resembles a microcosm of the real Myanmar. “There are a lot of Karen, Muslim and Burmans in California but they don’t mix. They are like oil and water,” Ma Swe Swe said.

“Myanmar is a country that not only belongs to Buddhists but also to other religions like Christian, Hindu, Muslim and Jewish for such a long time. Majority people are not supposed to attack minority people because of their skin colour or different religious beliefs, but most of our Burmese people of different religions have one common strong traditional belief, ‘Our own religion is the best in the world’.”

Ma Swe Swe believes that extreme religious beliefs can also influence political activism or be a reason why it is absent. “When unfair things happen to others, most of our Burmese Buddhist people used to say ‘Let it be’. Don’t take on bad Karma to your next life. Don’t interfere and let the one who committed the crime take his bad things to his/her next life,” she said.

For Ma Swe Swe, Buddhist passivism in the face of injustice is sometimes inexcusable. For her, the words of Nobel laureate Desmond Tutu have become a favourite motto: “If you are neutral in situations of injustice, you have chosen the side of the oppressor. If an elephant has its foot on the tail of a mouse and you say that you are neutral, the mouse will not appreciate your neutrality.”