The impasse at the 21st Century Panglong conference last month over the principle of “non-secession” highlights the risks to the peace process, which will only increase as political negotiations progress.

POLITICAL NEGOTIATIONS at the 21st Century Panglong Union Peace Conference hit a roadblock on the afternoon of Saturday, May 27 – the penultimate day of the event. As has been widely reported, the disputes focused on whether to include the term “non-secession” in the basic principles of the future Union Peace Accord and whether representatives of each group would sign the agreement from the five-day conference. Eventually, negotiators decided to resume discussions the following day, originally scheduled to be the last of the conference.

The negotiations on May 28 started at 9am. Officials from both teams – that is, the government and ethnic armed groups – later revealed that during the day there were at least two long breaks, which are signs of continuing deadlock.

By the late afternoon, many group consultations, phone calls to outside experts and “sidebars” – that is, one-on-one informal talks outside the negotiating room during coffee, bathroom or other breaks – had taken place. Advice was sought on how to overcome the deadlock. Alternatives were considered; not just on the principle that had caused the impasse but over the entire process.

All was to no avail. The different groups were unable to come to an agreement.

At this point, conference organisers began to announce that the closing session, which had been scheduled for that day, would be postponed. The conference was extended by another day. Because of the protracted negotiations, delegates to the Panglong conference knew something was amiss; they were not surprised by the extension when the announcement came.

Around 6pm on the evening of May 28, negotiators from both sides came together to craft the draft agreement. A total of 37 out of 45 points were agreed. The issue of signing the agreement was also resolved. Given the earlier impasse, it was a substantial result.

The heated issue of secession was postponed for further deliberation. In this way, the major hurdle was removed for the time being. By midnight, all words to be included in the overall agreement had been sanitised and approved; the document was ready for presentation to conference delegates along with the signing ceremony at the closing session the next day.

Those who witnessed the negotiations on May 27 and 28 say they were the “most difficult to date”, according to one participant. They worry about how the next round of talks will unfold. 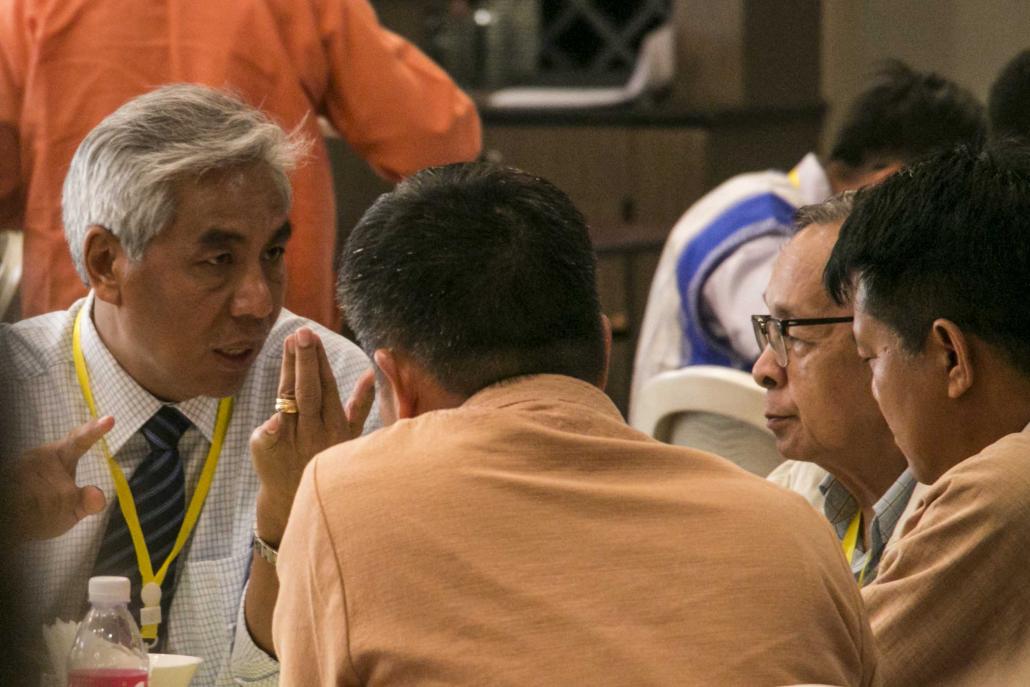 Ethnic leaders locked in discussions during a break on May 26. (Nyein Su Wai Kyaw Soe | Frontier)

Fortunately for them and the process, the successful ending of the conference with concrete agreements took away some of the tension. But as delegates left Nay Pyi Taw on the afternoon of May 29, these tensions were still palpable.

The peace process will go on. Negotiations will continue. But once too many times trust has been stretched to breaking point. The resolve of all stakeholders will be pushed even further during upcoming talks.

For now trust is not dead; it has been wounded and needs healing. This requires concrete steps. A dialogue at the earliest time to review the Panglong conference process and how events unfolded in late May is essential.

However, all stakeholders need to recognise that trust is often the first casualty when negotiations sour. At the Panglong conference, the government side felt they had already sorted out the sticking point prior to the conference, through the Union Peace Dialogue Joint Committee, which is the main negotiating body. The other side insisted that the term “secession” be included, despite this prior agreement.

Peace negotiators in a protracted conflict such as Myanmar’s tend to live in the moment when engaged in serious negotiations. If they overcome the deadlocks, they breathe a sigh of relief and prepare for the next round or the next issue with renewed energy. Or they take a break due to mental exhaustion from the arduous negotiations.

But if talks enter a deadlock, negotiators tend to forget that peace negotiations are a process and not one-off event. They may fight for themselves or their institutions. They may have forgotten the reason why they are at the negotiating table in the first place. In that moment of heightened tension, even the most level-headed negotiator can lose their head.

Given the high stakes, such situations are dangerous. In an uncertain and emotional atmosphere, doubts about the process and the people across the table will creep in. Scapegoats will be made. Past grievances will appear and each side’s political will and sincerity will be questioned. These are the moments when the usual hotheads will be more emboldened. They will call for drastic measures.

Myanmar’s peace negotiations are now substantive and the agreements reached will form the basis for constitutional change to enable a transition to federalism. Under these circumstances, a lot is at stake individually and institutionally. All sides may go for the kill.

There were other critical factors that might have contributed to the impasse at the Panglong peace conference. They include miscommunication, time constraints, a lack of critical information, insufficient preparation and, above all, the politics of negotiations.

In the end, the deadlock at the UPC may serve a useful purpose – as a lesson that deadlocks can be overcome without sacrificing trust.

Aung Naing Oo is currently the director of Center for Peace and Reconciliation. He participated in the 21st Century Panglong Union Peace Conference as an invitee of the government.