Lack of clarity on foreign ownership, land use and building management committees in the Condominium Law are holding back growth in the property market.

When the Condominium Law was enacted in early 2016, many hoped it would provide a framework that could spur development in the sector, not least by permitting foreign ownership. But the law has not helped the dormant condominium market; instead, it has only fuelled uncertainty, prolonging the torpor.

A heavy-handed – albeit well-intentioned – approach to regulation of condominium development in Yangon has not helped. In 2016 over 200 high-rise projects were frozen pending inspection and approval. Some developers were facing the uninviting prospect of removing already-built floors from their projects, before such orders were retracted.

The law has a range of gaps and ambiguities, some of which are minor and others fundamental. It is hoped that the forthcoming by-laws will provide clarity. These by-laws are reportedly in the drafting stage, but there has been little concrete information about their contents.

Moving forward, three things need to happen to make this law implementable and effective. The first is that the by-laws need to clarify land ownership requirements in the law. Second, the by-laws should make condominium and strata schemes workable, preferably using laws and regulations from abroad as a model. Third, some external factors inhibiting the market need to be addressed.

The Condominium Law requires that all projects be constructed on land that is collectively owned by the owners of units in the building. It does not, however, specify which types of land are capable of collective ownership. Mr Alexander Bohusch, a partner at Luther Law Firm, identified this as one of the biggest question marks surrounding the law, and an issue that needs to be clarified in its by-laws. “If only specific types of land, such as grant land and freehold land, can be used for the construction of condominiums then the limited availability of suitable land may limit the registration of properties under the new law,” he said. 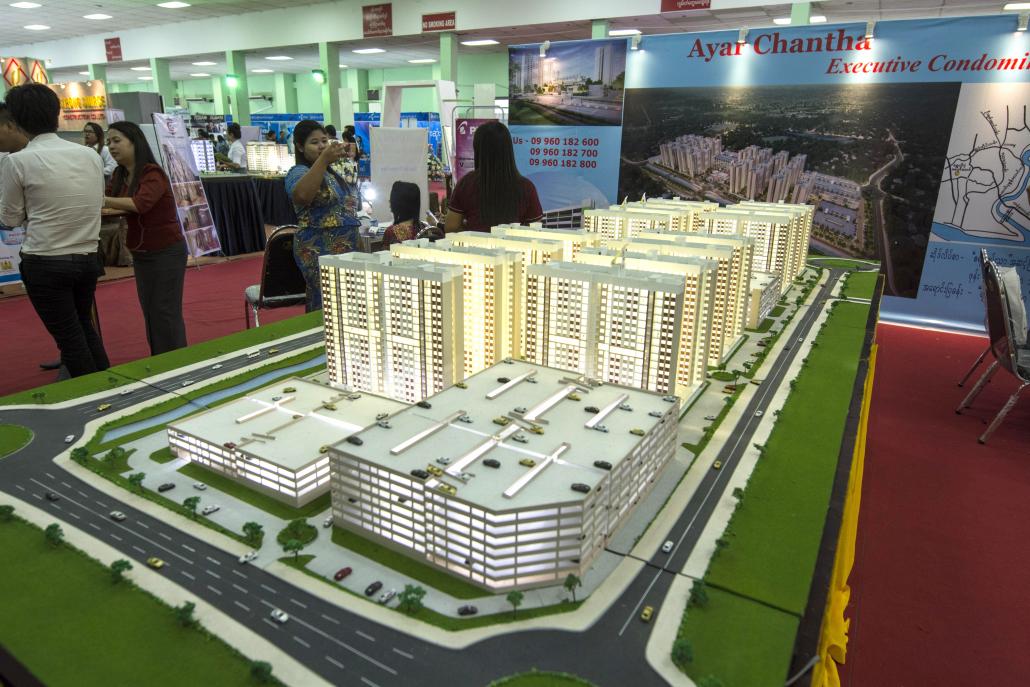 A model of a housing project in Dagon Seikkan Township. (Teza Hlaing | Frontier)

This issue stems from the fact that a large proportion of projects are built on leased land under build-operate-transfer arrangements. This means developers cannot procure strata title of the land for property purchasers, because the land remains owned by the entity leasing it – typically the government.

The pragmatic approach is for the by-laws to integrate this kind of land. This requires providing an expanded definition of “collectively owned land” that includes long-term leasehold interests. It would also be beneficial if such interests could be continually renewed, but that is a matter for broader reform.

The Condominium Law would also be greatly improved if it clarified the rights for foreign owners. Under the law, 40 percent of a condominium may be sold to foreigners under the Law. Thailand’s condominium law permits 49 percent, a similar proportion. This close neighbour provides several useful lessons on aspects of foreign ownership.

In Myanmar, earlier laws forbid transferring ownership of land and property to foreigners, with only limited exemptions. Thailand’s condominium law contains a clear statement that any previous inconsistent laws are superseded. An unequivocal statement in the Condominium Law that it supersedes previous law or qualifies as a permitted exemption would provide clarity.

On ownership, the assumption under Myanmar’s law is that the foreign share is calculated according to the number of apartments: that is, 40 of 100 apartments would equal 40 percent. Where units vary significantly in size, this is not proportionate. The conventional measure of floor space used by Thailand’s law is preferable.

Finally, clarifying that foreign ownership under the Condominium Law extends beyond individual foreigners to also include foreign entities, such as organisations, companies or corporations, would broaden the scope for increased market activity. The law in Thailand specifies that foreign entities can hold ownership.

Condominium and strata schemes from abroad reveal a range of additions that the Condominium Law would benefit from incorporating over the longer term.

Compared to other schemes, the Condominium Law contains limited information about condominium management, for example. It would be advantageous for the forthcoming by-laws to offer clarity. Incorporating a range of detailed processes for forming, managing and running an owners corporation or body corporate – described as an “executive committee” under the law – would be beneficial.

The law would be strengthened if it provided conditions for each executive committee to enact and enforce its own by-laws. Other regulatory schemes incorporate mandatory or model by-laws, and provide for the creation of by-laws by each owners corporation. Such by-laws can govern a broad range of matters, including maintaining common facilities, the use and management of owners corporation assets, and assessing and collecting contributions toward common expenses. 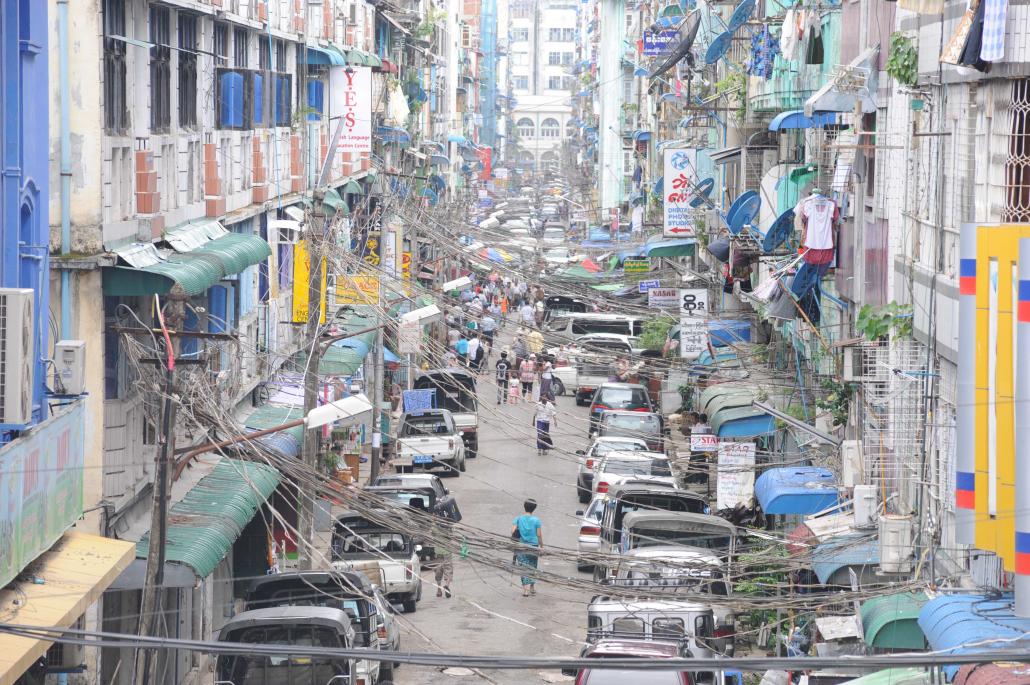 Municipal rules that require all condominiums to have 1.2 parking spaces per apartment could hinder the development of projects aimed at the middle and lower ends of the market, where most of the demand is. (Steve Tickner | Frontier)

The Condominium Law could also incorporate mandatory insurance provisions, which are present in some other regulatory schemes. Ordinarily the owner’s corporation must enter and maintain a contract of insurance over the building. Given the state of Myanmar’s insurance industry, this might not have immediate practical utility. However, it will be important over the long term.

Finally, it would be worthwhile adopting provisions that ensure disputes are settled in a structured manner. Other schemes govern a range of disputes involving owners, executive committees and/or tenants. Dispute resolution procedures can also assist in enforcing owner’s corporation by-laws.

Greater obstructions to growth can be found outside the law, however. Two of these are particularly acute.

Mr Tony Picon, vice chairman of Colliers International Myanmar, said that parking regulations are “really causing problems in the market”. The existing Yangon rules mandate that new buildings have 1.2 parking spaces per unit. “The more units you have in the condominium, the more parking spaces [you need] and the less feasible the project becomes,” Picon said. This regulation could inhibit the development of condominiums priced at the middle and lower end of the market, where demand is concentrated and prospective apartment buyers are less likely to own a car.

The second factor is a lack of access to financing. Most property transactions are paid for upfront in cash, rather than through bank loans. This both restricts access to ownership and gives monetary authorities few policy levers to influence the market.

There are two promising developments on this front. The first is the budding mortgage market. Certain banks now offer loans for property purchases with repayment periods of up to 15 years. The second, related development is the establishment of a credit bureau, which should become operational later this year. The ability to build up a credit score will make securing a loan easier for many. These advances indicate that, at the very least, progress is being made.

Ultimately, though, there are no panaceas for the lagging condominium market and the challenges are formidable. Improvements to the Condominium Law and the broader conditions preventing its implementation will be a positive step.