Brotherhood of the wheel

In fairgrounds across Myanmar, Ferris wheels are turned by the muscle power of teams of young, agile men who form tight bonds in lives lived on the road.

I CAME across the motley crew of travelling funfair workers at a fairground near the Aung Mingalar highway bus station in Yangon’s North Okkalapa Township. Many visitors to Myanmar have marvelled at the human-powered Ferris wheels seen at fairgrounds throughout the country, but I wanted to learn more about the people who risk their lives working the old, wood-and-metal contraptions.

I had suspected they would be similar to the travelling groups I had seen working at rickety funfairs in London. I was not wrong; a nomadic existence attracts a certain kind of person. Some are forced to leave home for long periods in search of work, while others are seeking a life away from their homes, with a new family.

A friend had taken me to the fairground in January on a dusty field near North Okkalapa’s Mae La Mu Pagoda, in the north of the city. Fairs are often held near pagodas during Buddhist festivals, which effortlessly blend religious observance with leisure.

The large wood-and-metal Ferris wheel was the centrepiece of the fair. Sitting beneath it were a dozen idling young men, some dressed only in longyis. They seemed suspicious as I approached with my friend and guide, Sly, and we were a bit nervous. Their boss was not present and they were reluctant to talk. 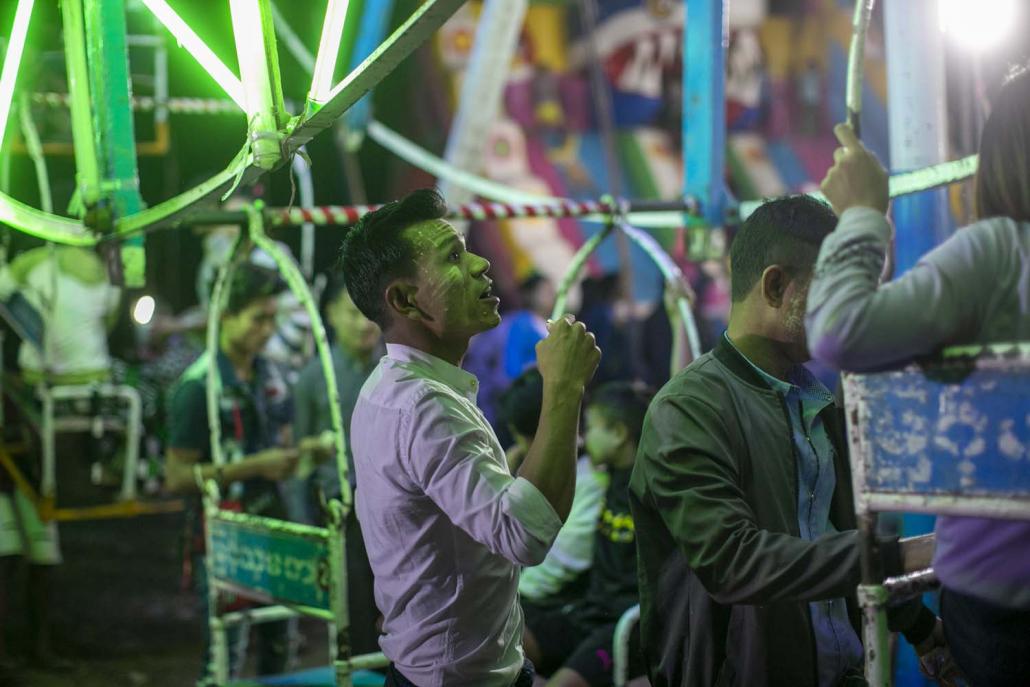 It was my first meeting with the group. (The next came the following month, at a fairground in South Dagon township, where the pictures for this article were taken.)

Next to the Ferris wheel at the North Okkalapa ground was a bamboo shack that serves as their sleeping quarters. Ko Yaw Ye, who had face piercings and a big tattoo of a bird on his chest, was hanging out his washing on the ride’s seats. Other members of the group were napping ahead of what would be another strenuous night.

The shack, where they sleep on mats, is their home for most of the year. At the end of each fair, they break down the flimsy structure and move it with them to the next fairground. Ko Ye Lin Ma, one of the leaders of the group, says he is accustomed to this way of life. “Every year we follow the same pattern and we are used to it, but I miss my family,” he said.

Ko Kyaw Mozin catches my eye. He’s an albino with a friendly, betel-stained smile and the word “music” tattooed in English on his right hand. He smokes a cheroot and seems comfortable answering my questions.

“We all come from roughly the same place,” he says. “We heard about this kind of work from friends and joined them.” 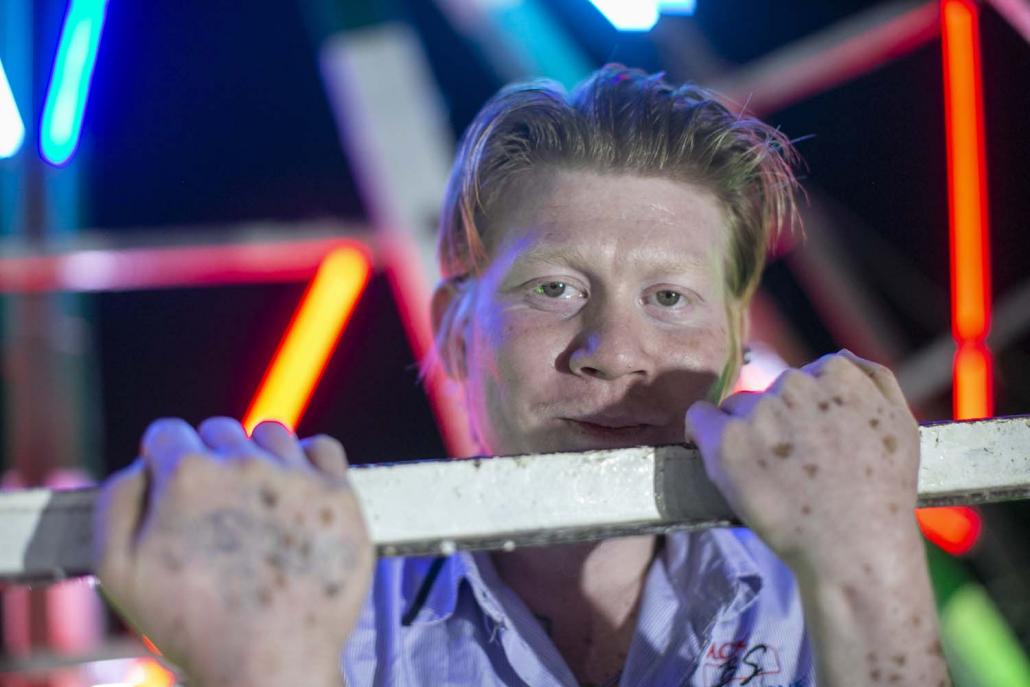 “Sometimes our families send us,” interjects Ye Lin Ma. “We travel around the country for eight months and go home for the rainy season.” Most of the group are from Hinthada Township in Ayeyarwady Region, about 160 kilometres north-west of Yangon.

The group’s boss is Ko Maw Gyi, 45. He started working on Ferris wheel rides when he was 14 and eventually married the daughter of his boss, who asked him to continue the business. He used to have a smaller wheel but replaced it with a bigger one that he designed himself.

Covered in tattoos and piercings, many of the young men exude a rogue spirit seen in travelling communities throughout the world. It was as if the Romani “gypsies” from India’s Rajasthan who travelled west across the Eurasian continent in the late first millennium, and who have often found work in fairs, had also made their way to Myanmar.

To prepare for the show, they put on make-up, including thanaka paste, and jewellery, and pull ironed shirts out of a personal metal cases to wear with their longyis. As the lights and music of the Ferris wheel are turned on against the backdrop of a purple and orange sky, family groups begin arriving and the young men assume their roles. 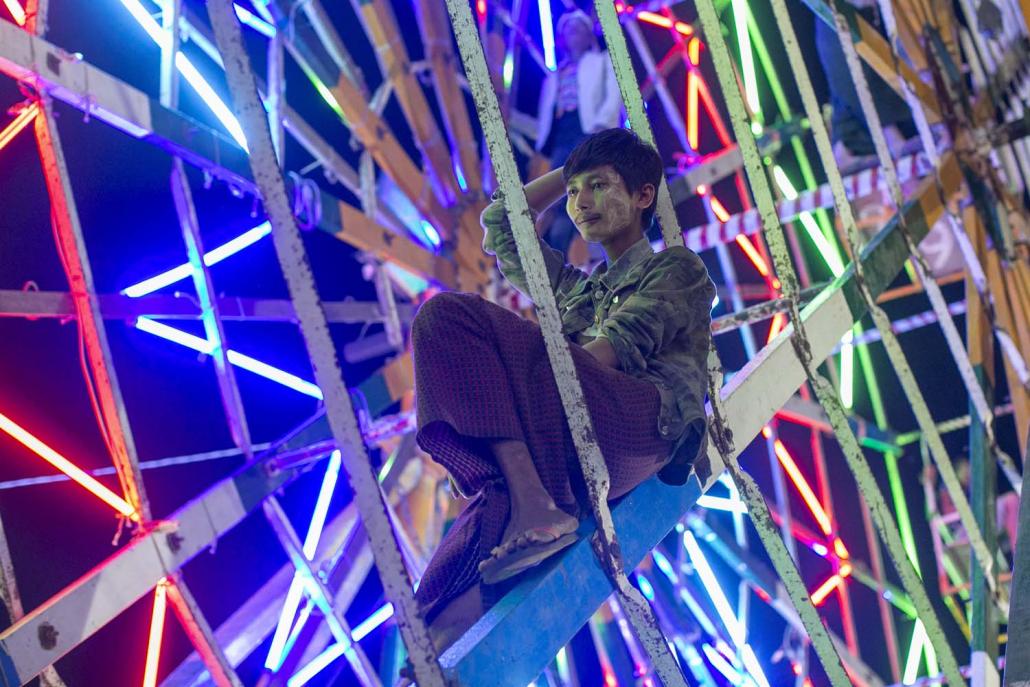 There is fear and excitement in the eyes of the children who squeeze into the wheel’s seats, and for good reason. The Ferris wheel looks old and creaks unnervingly. There are no proper safety bars to hold the children in the seats, which swing on loose hinges.

The wheel is about 15 metres in diameter and is powered by muscle. Before the sources of its power climb to their positions on the wheel, they offer a prayer, each bowing their heads against the base of the structure and muttering a few words. Ye Lin Ma, who has been working at fairgrounds for six years, says they pray not only for their own safety, but also that of their customers.

They work quickly in unison to start the wheel turning. From their positions at the top of the wheel they use their combined weight to accelerate its rotations while hanging off the seats. When they reach the ground, they jump off and quickly get out of the way of the next worker riding the wheel. These agile manoeuvres are performed with well-practiced skill, but the danger of the work is clear. 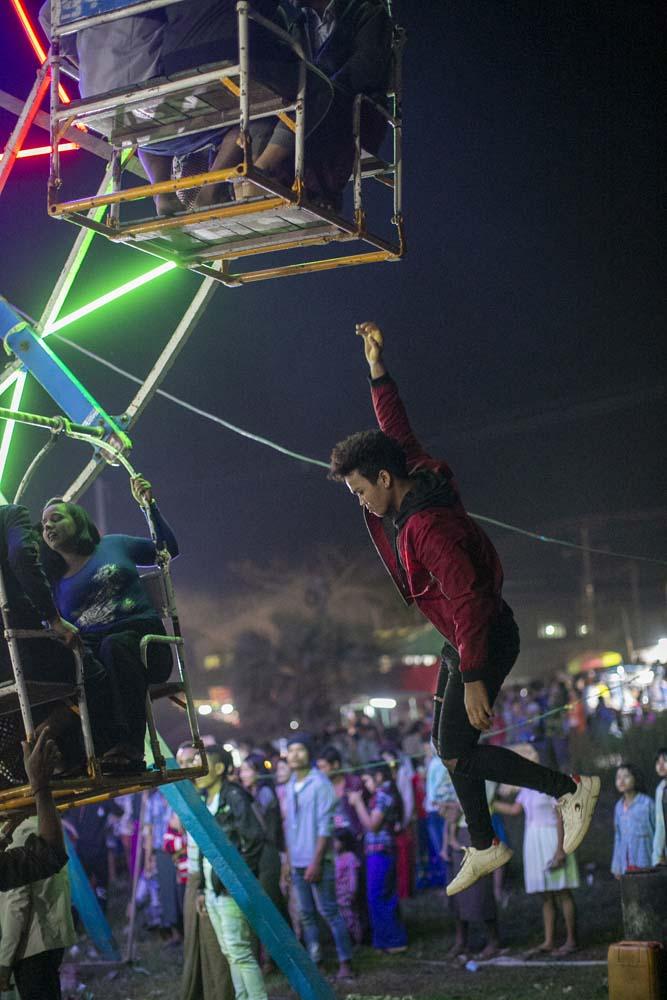 Each time the wheel goes around a member of the team clings to it as screaming children ride high into the night sky. These circuits often contain daredevil flourishes. At one point, a team member wedges himself between two spokes of the wheel and does a full circuit, positioned upside down at the apex. Another remains upright by treading the spokes as they turn, like someone running up a wall without gaining height.

As each ride comes to an end the wheel must be slowed and then stopped before a fresh group of children is ushered into the seats. From their positions high on the frame, the team is directed by a colleague on the ground who blows a whistle as each seat fills. The teamwork and organisation behind this scene of apparent chaos is impressive to watch.

Maw Gyi says the young men who work for him are from poor backgrounds. “Sometimes if their families are struggling, I send money directly to the family,” he said. “I try to help them and if they need their wages early, I give it to them.” Most members of the team are in their mid-twenties. None of those I ask have wives or children. Life on the road would make that difficult anyway. 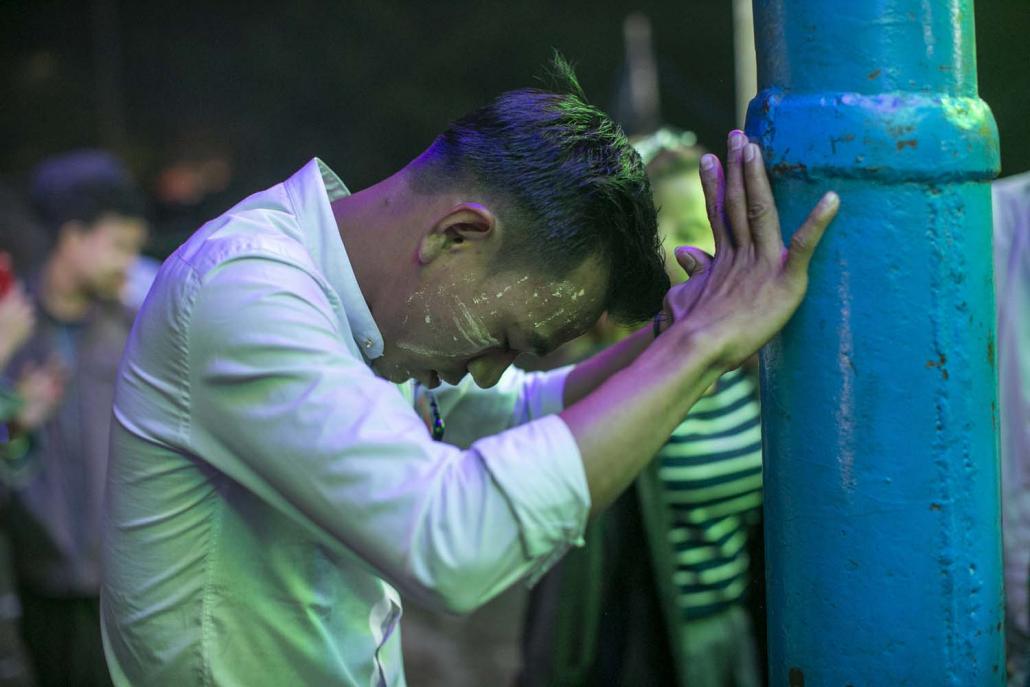 “It’s a tough job, the pay is not great, but it’s enough,” said Ye Lin Ma. “We can earn maybe K2,000 a day in Ayeyarwady, but we can make more here.” He wouldn’t reveal their takings at the Yangon fair.

The team’s next stop will be somewhere in Ayeyarwady. It will be a step closer to home and a few months sitting out the rainy season while waiting for the yearly circuit to start turning again, powered by human strength, skill and daring. 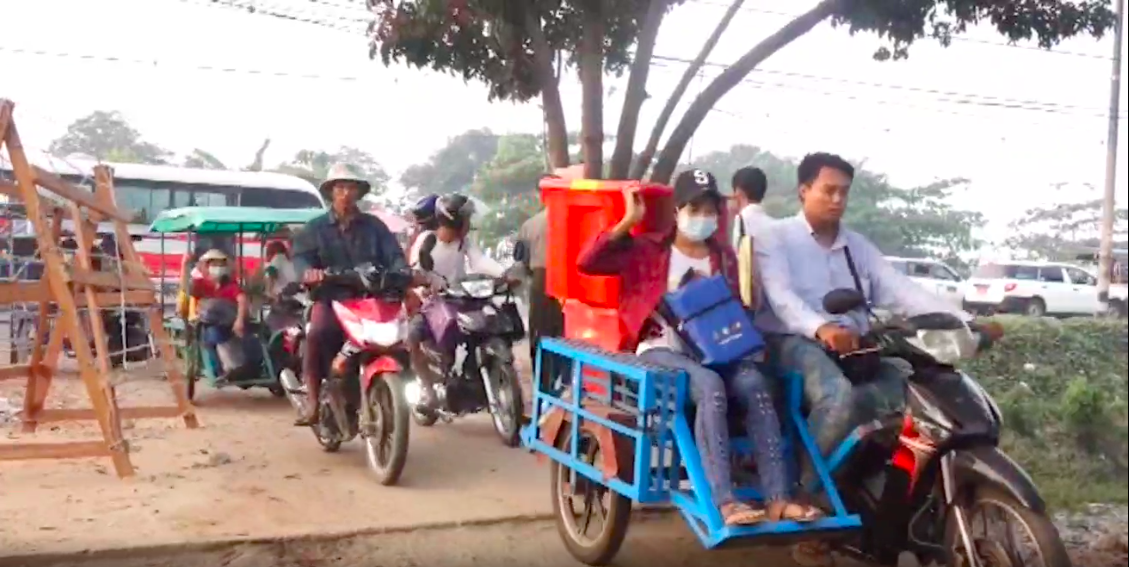