Bridging the divide in Bilu Kyun

A bridge being built across the Thanlwin River at Mawlamyine will bring positive change to scenic, rural Bilu Kyun but some residents worry about the possible negative impact of development on the environment.

THE FIRST bridge to link the mainland at Mawlamyine with nearby Bilu Kyun (Ogre Island) will bring far-reaching change to the lives of its residents. Most of it will be positive.

As well as making it easier for island residents to travel the short distance across the Thanlwin (Salween) River to the Mon State capital for education, business or healthcare, the anticipated opening of the bridge by March 2017 is also likely to boost Bilu Kyun’s popularity as a tourist destination.

The Thanlwin is a formidable barrier and even though barely 500 metres of water separates Mawlamyine and the island, they are world’s apart.

The 1,586-metre (5,203-feet) bridge will link Mupon jetty, just south of Mawlamyine, with Ka-nyaw village in Chaungzon Township. It is the only township on the island, which is shaped like a reverse tear-drop and is about 35 kilometres long and about 20km at its widest. 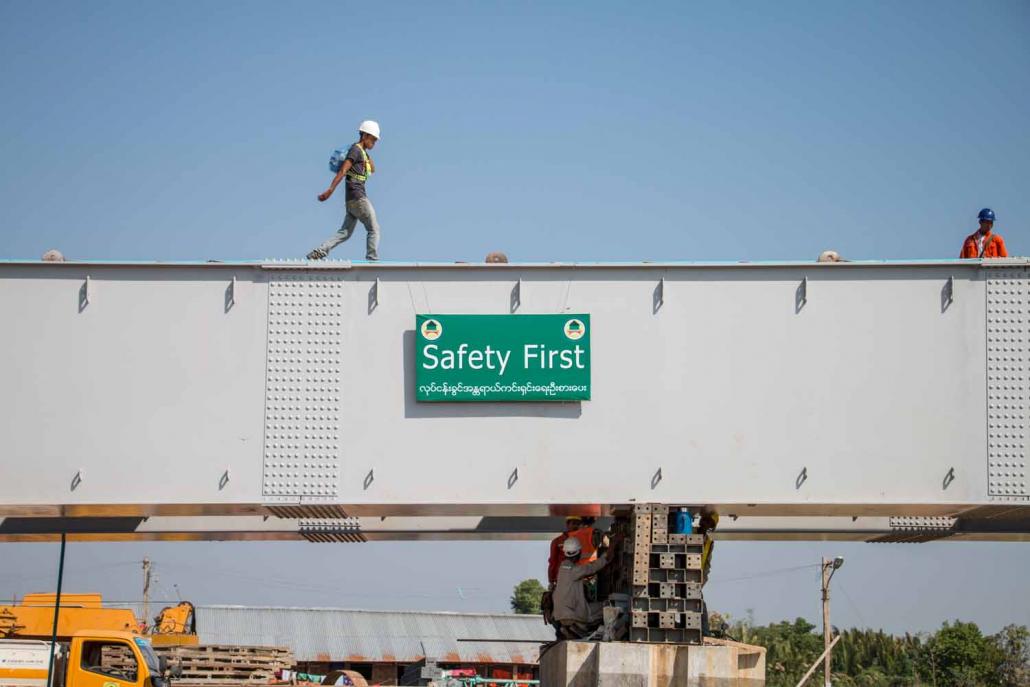 A construction worker walks across the bridge that is being built to connect Bilu Kyun with the mainland. (Nyein Su Wai Kyaw Soe / Frontier)

The estimated cost of the steel box truss bridge, which will be high enough for big ferries and ships to pass beneath, is US$46 million (about K63.76 billion), U Myo Thet Tun, an assistant director on the project, told Frontier.

The groundbreaking ceremony for the bridge was on February 8, 2015 and it is expected to be completed at the end of the 2016-17 fiscal year, Myo Thet Tun said – several months ahead of schedule.

“We are working day and night to try and finish the bridge ahead of schedule, so that residents can enjoy its benefits sooner,” he said. 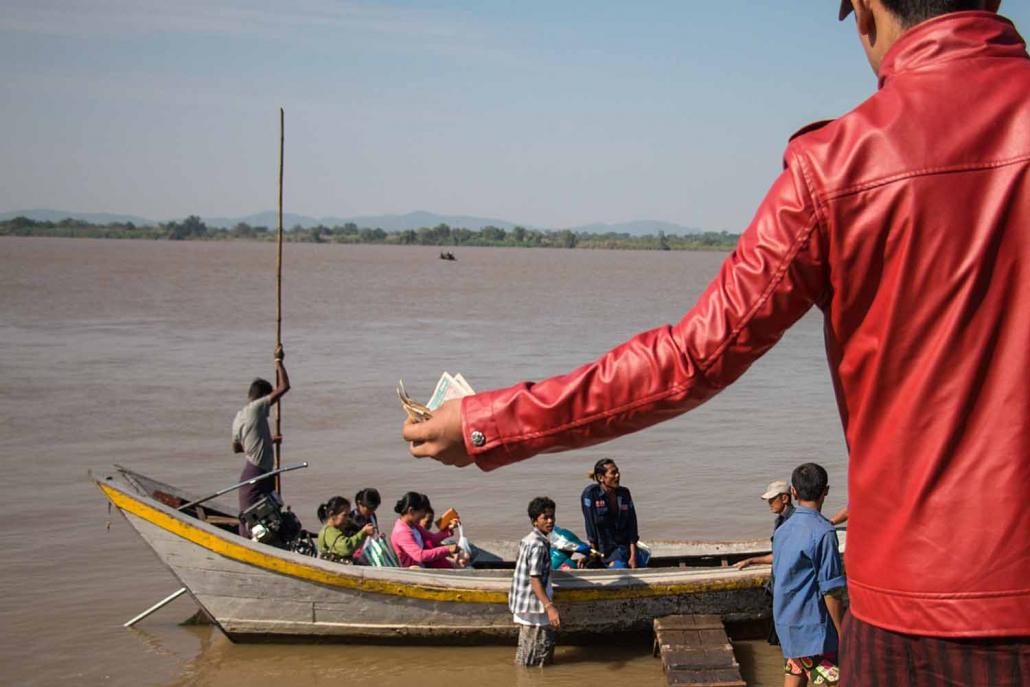 Myo Thet Tun said one positive benefit of the bridge would be easier and faster access for island residents to medical and hospital facilities in Mawlamyine.

For island residents who need to travel daily to Mawlamyine, the bridge will mean an end to having to rely on sampans to cross the Thanlwin and the inconvenience of disrupted plans when the vessels can’t operate because of bad weather. 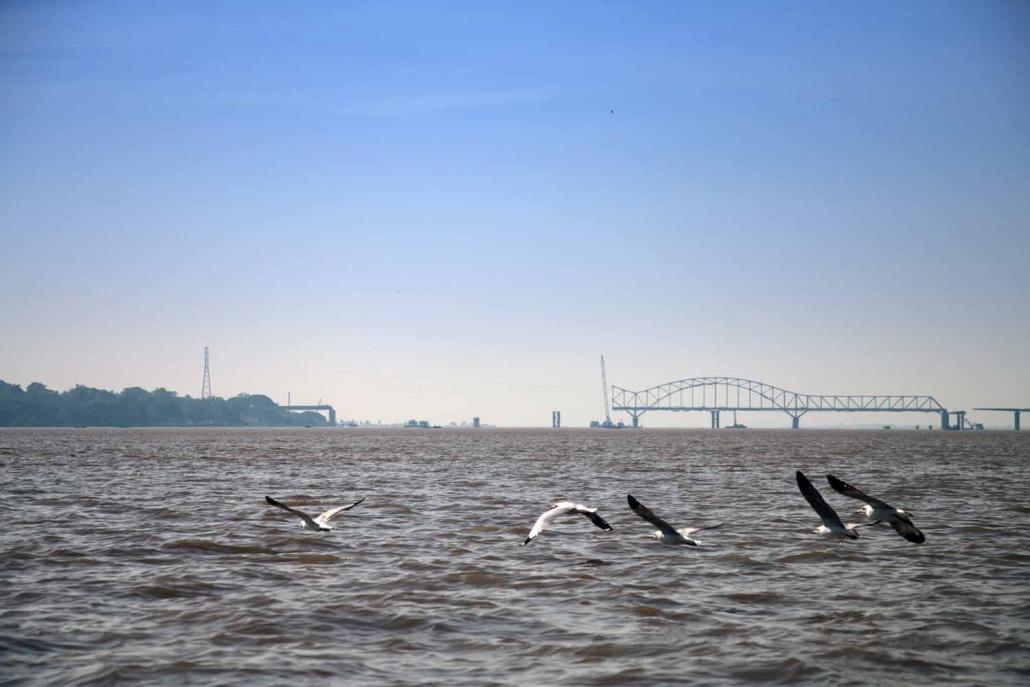 “It’s really difficult to cross the river in the rainy season,” said Ko Kalar, a motorbike taxi driver who lives near Mupon jetty and often takes tourists to the island.

Although the reaction to the bridge is mainly positive, especially among villagers on the eastern side of the island closest to Mawlamyine, there’s concern among some residents about its implications for Bilu Kyun. 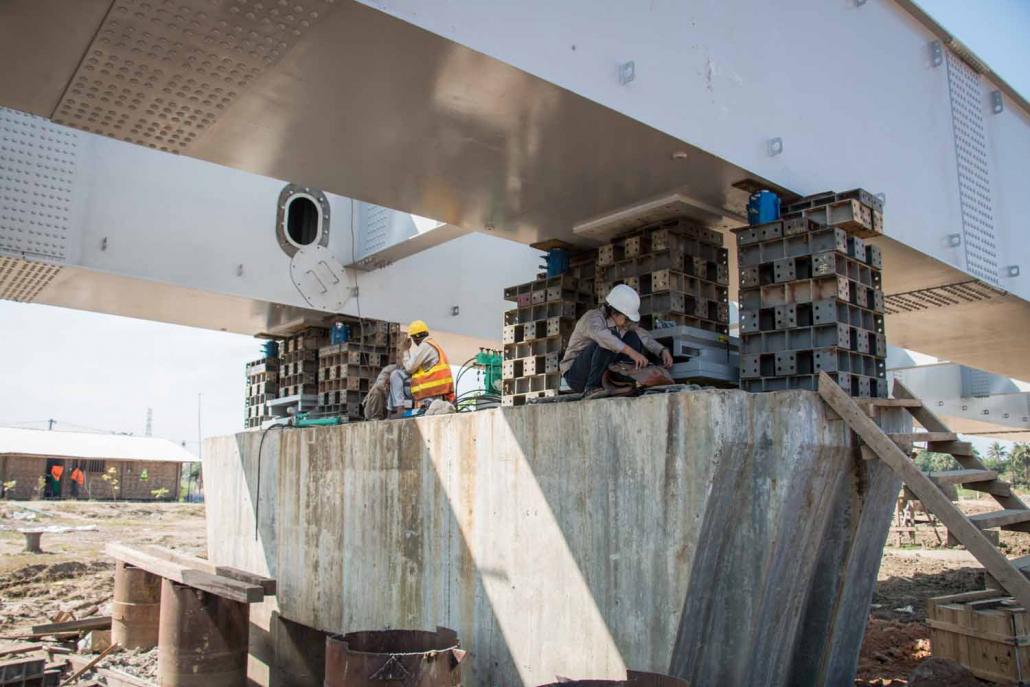 Some residents worry that the accelerated development expected to follow the completion of the bridge will be detrimental to the island’s attractive environment.

Investors have been showing interest in the island’s tourist potential and have surveyed beach and other sites for possible projects, something that concerns residents who want Bilu Kyun’s environment to be preserved. Dr Aung Naing Oo, the deputy speaker of the Mon State Hluttaw who was elected in November 2015 as the All Mon Regions Democracy Party candidate for Chaungzon-1, said the government should develop a management plan for Bilu Kyun.

He welcomes the development the bridge will bring but is concerned about the possibility of negative environmental and social effects.

“The government needs to have a good development plan that involves all stakeholders, including residents on both sides of the river and businesspeople,” Aung Naing Oo said.

“We need a good management plan to protect our environment and the interests of island residents because if we don’t have one development may destroy our future,” he said. 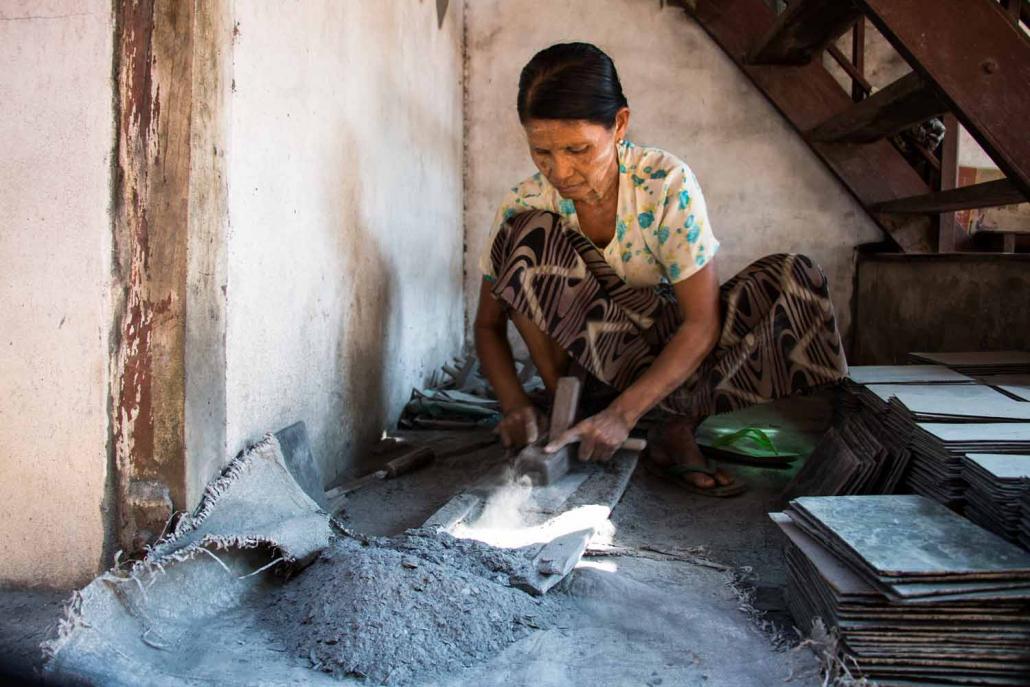 As well as having a large farming population, Bilu Kyun is also renowned for its local handicrafts. (Nyein Su Wai Kyaw Soe / Frontier)

The interest shown in the island by investors is reflected in the steady increase in land prices in recent years, a trend that has only been boosted by the bridge project.

“Businessmen keep offering to buy my rubber plantation but we don’t want to sell,” said U Min Win Hla, 46, who lives near Ka-nyaw and also grows paddy.

“We need the plantation for our livelihood but others have already sold their land,” he told Frontier.

In common with other paddy growers on the island, Min Win Hla sells his harvest to a broker who then sells it in Mawlamyine. 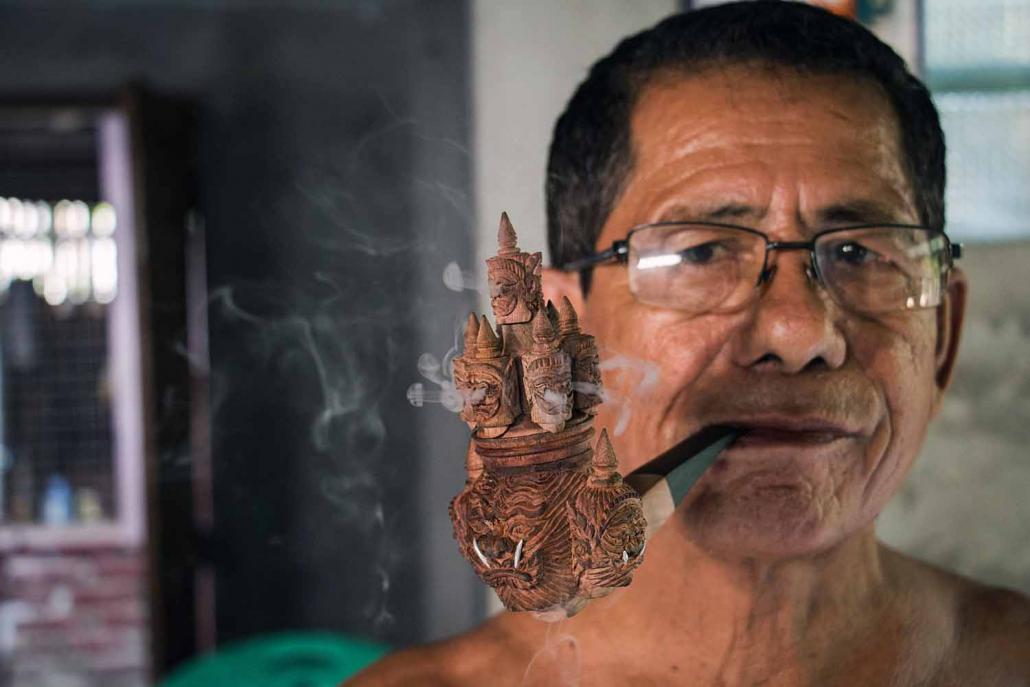 The price difference is substantial. Every basket that traders buy on the island they sell for an extra K5,000 to K10,000 in Mawlamyine; the basket size they use on Bilu Kyun is also 25 percent bigger, enhancing their profit significantly.

Farmers have little choice but to sell, though. Min Win Hla said most large buyers in Mawlamyine will only purchase from brokers, and not directly from the farmers.

“When we want to sell paddy, the brokers come to the island to buy it. The price always depends on the broker because they have to transport it across the river to Mawlamyine,” he said.

As well as paddy, rubber and beans, the other main products on Bilu Kyun are handicrafts and the island is famous in Myanmar for the wooden smoking pipes made in Ywalut, one of its 78 villages.

The pipes are very popular with tourists, said Ywalut resident Mann Ngwe Wynn, who also carves other products from wood. 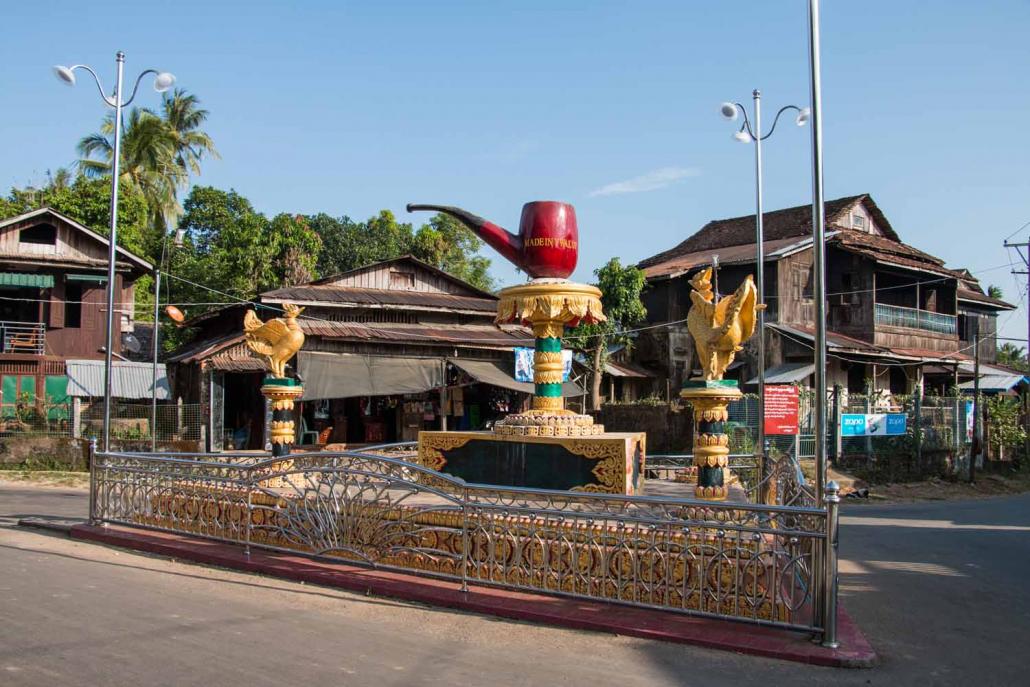 He makes images of famous international leaders, local mythological figures and, of course, Daw Aung San Suu Kyi. He said he recently sold a carving of Che Guevara, the communist revolutionary, to a Japanese tourist.

“The handicrafts industry on the island is very well developed,” said wood carver U Than Htike, who lives at Da-Yae village in the north of Bilu Kyun. His most popular products are animals carved on driftwood found in the river.

Than Htike said he hopes the new bridge encourages more tourists to visit, while also making it easier for him to sell in Mawlamyine.

“Now we are just waiting for customers to come and buy our handicrafts,” he said. “But if it’s easier to cross the river at any time, we can go and sell our products in Mawlamyine, too.”

Top photo: Construction workers on the bridge that is being built to connect Bilu Kyun with the mainland. (Nyein Su Wai Kyaw Soe / Frontier)