Childhood visits to a shrine at the Botahtaung Pagoda provided inspiration for exquisite porcelain ceramics on show at an exhibition in Yangon.

WHEN ceramicist Soe Yu Nwe lived in Yangon’s Pazundaung Township, she often visited the nearby Botahtaung Pagoda, where she admired a shrine dedicated to Mya Nan Nwe, a spirit believed to be the reincarnation of “Naga Maedaw”, the dragon (or serpent) queen, who guards the famous pagoda.

“I was inspired by Mya Nan Nwe and this piqued my interest in the Naga Maedaw,” Soe Yu Nwe, 30, told Frontier at Myanm/art gallery in Botahtaung Township in downtown Yangon, where her “Hybridized Beings” exhibition is on show from February 28 to March 15.

The artist recently returned from a residency at Seattle in the United States, where she also curated an exhibition of contemporary Southeast Asian ceramics. She has a Masters of Fine Arts from the Rhode Island School of Design, also in the US, where she developed her skills as a ceramicist. In 2019, Soe Yu Nwe was included on Forbes’ magazine’s “30 under 30” list for Art & Style.

Although she has exhibited only three times in her native Myanmar, Soe Yu Nwe’s work has often featured overseas, including at contemporary spaces such as ZieherSmith, in New York’s artsy Chelsea district, at Singapore’s Yavuz Gallery, which has also shown the work of other Myanmar artists such as Po Po and Htein Lin, and in Brisbane at the Queensland Art Gallery/Gallery of Modern Art, Australia’s largest contemporary art museum.

Originally from Lashio in northern Shan State, Soe Yu Nwe is a third-generation immigrant from China and is known to friends by a Chinese nickname, Shu Hua, meaning “tree flower”. But beyond a preoccupation with dragons, which is shared across cultures, her work is immersed in traditional Myanmar symbolism.

Through references to animism, folklore and mythology, her work probes traditional notions of femininity in Myanmar. Her creation of solitary figures, alone in a void, seems to express the isolation women can experience in Myanmar’s conservative society. 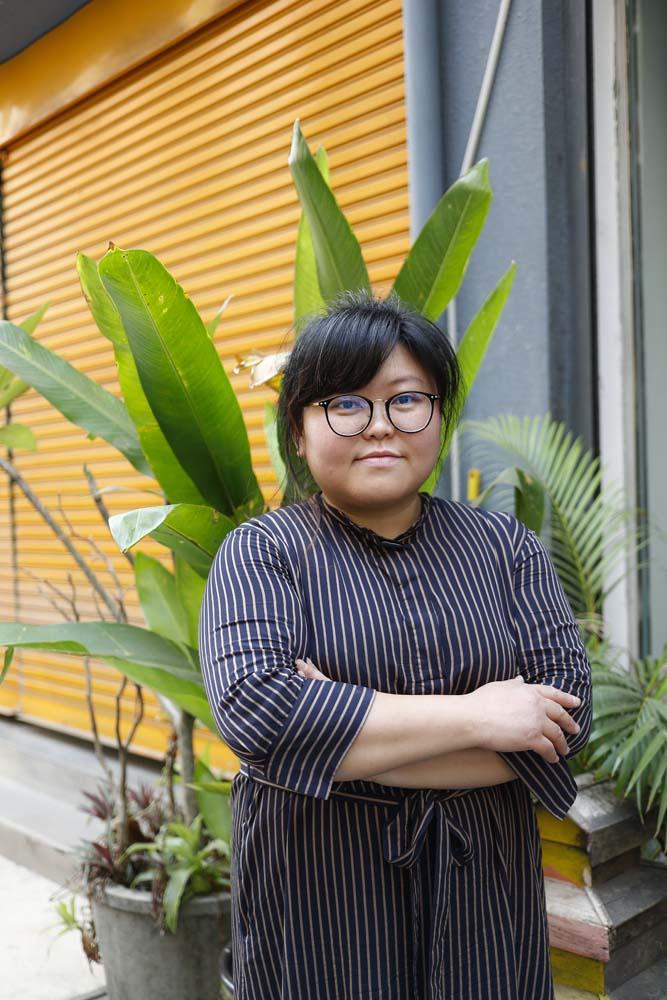 Working with ceramics requires a lot of skill, especially when the material is very “fragile and very heavy,” Soe Yu Nwe told Frontier. As a medium, ceramics can be both limiting and rewarding, she said. “It’s expensive to make, expensive to ship and very high risk as well, so I’m risking a lot to make these things happen.”

“Ultimately, I feel that it’s worth it,” she said. “It depends on who your audience is. I feel like different people respond to different mediums differently. It’s very tough to tackle, but on the other hand, people who like to have a more intimate physical relationship with artwork would appreciate it.”

Soe Yu Nwe strongly feels that it’s easier for people to engage with a three-dimensional ceramic creation than a video or a painting.

“It’s something that you know is out there [in the world], not just in your imagination. It’s real, it’s there and it’s physical,” she said. “And also, when you work with ceramic, you create it by touch and you don’t create the depth as you would in a painting. The depth is already there.”

“I want them to feel like they’re seeing something new, something that I’ve created from my own imagination,” Soe Yu Nwe said. “I’m sharing something very intimate in my head with them.”

In “Serpentine”, her last exhibition at Myanm/art when the gallery was in Bogalay Zay Street, also in Botahtaung Township, she addressed contradictory ideas of femininity in Myanmar culture with intricately designed ceramic snakes.

Snakes or dragons in traditional lore (both conveyed by the word naga) have a potent power that can be either dangerous and malevolent, or protective and nurturing. These serpents find a newer, grander form in the signature exhibit at “Hybridized Beings”, the Naga Maedaw, a creation in white, translucent porcelain, embellished with botanical forms. 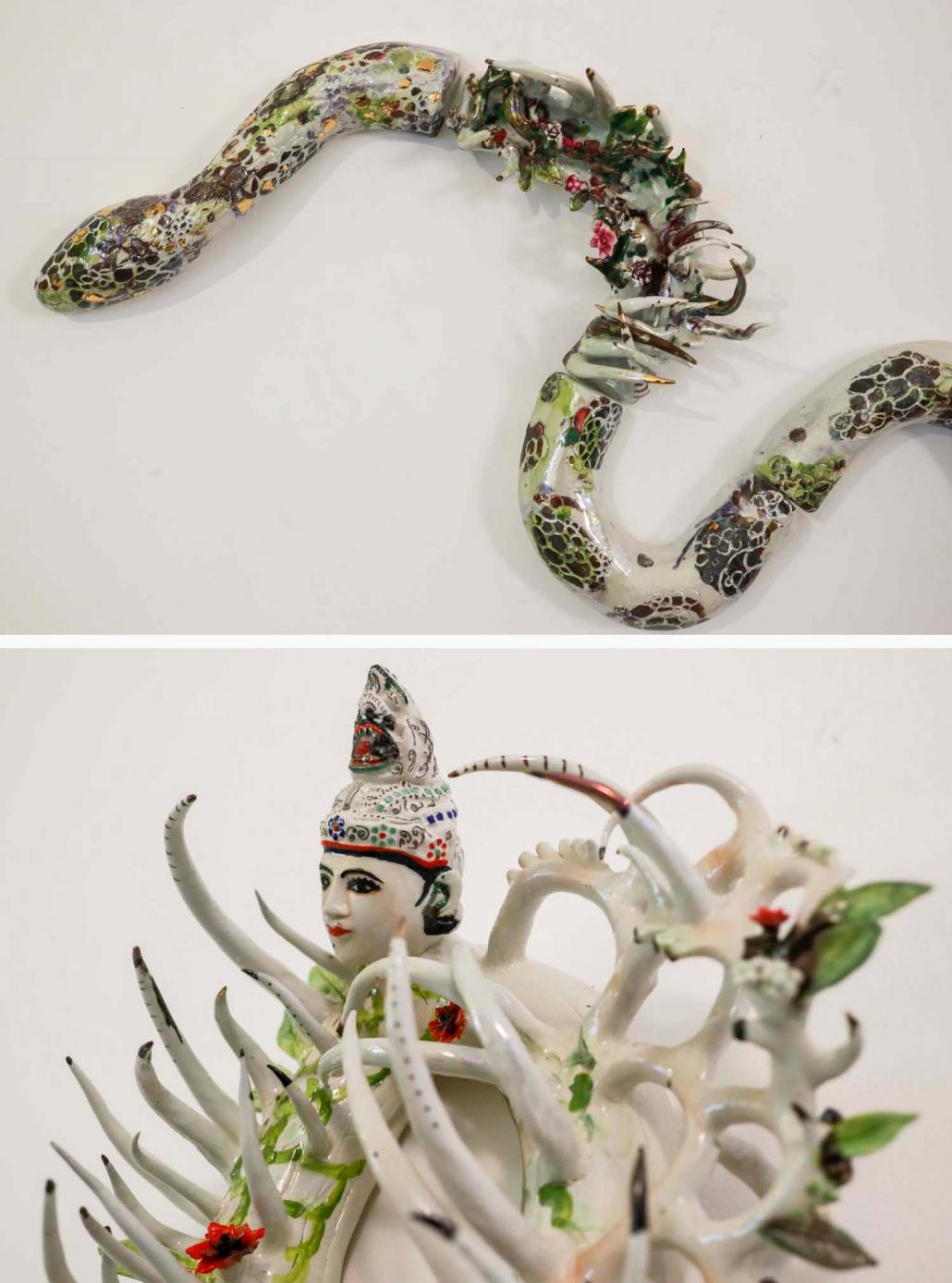 The Naga Maedaw is both a muse and an enigma for Soe Yu Nwe. Like most aspects of Myanmar folklore, its meanings are multiple and hard to pin down. She thinks of it like a puzzle she’s still in the process of cracking.

The exhibition features other works that meld together human, animal and botanical forms to create fantastical creatures, rendered in cold ceramic. She said the botanical motifs are often lifted from nature, as well as from pagodas and temples throughout Myanmar.

“Even though I make most of my art abroad, my interests come from here [Myanmar]. A lot of imagery is inspired by what I see in this country. In temples and pagodas, there are some really mossy areas that you see during the rainy monsoon season here. So, inspiration-wise, I do find it very rich here,” Soe Yu Nwe said. Myanmar’s flora has also been an inspiration for her “Botanical Woman” series, also featured in the exhibition.

But despite the more obvious themes of femininity and folklore, Soe Yu Nwe sees her work as fundamentally open-ended. “I don’t want to dictate what people think of my work,” she said. “They can experience it and interpret it however they like.”

Soe Yu Nwe said only a few people were making ceramic sculptures in Myanmar and she was committed to nurturing the development of the art.

Asked about the health of the Myanmar art scene, Soe Yu Nwe said she felt “energised” by the emergence of new mediums for expression – with more exhibitions featuring installations, video and sound works, and performance art – and the growth in art spaces in Yangon.

“This is a very good thing, and tourists are interested in the development [of the art scene],” she said. “I will have a bigger audience to show my work to.”