Southern Chin State has been open to foreign travellers since 2015 and offers hundreds of kilometres of roads to explore – if you don’t mind some bumps along the way.

By WILL CALLAN | FRONTIER

JUST A FEW years ago, a foreigner visiting Chin State without a special permit would have found the threat of expulsion by government officials as constant as the surrounding green mountains.

Chin, which has been open to foreigners since 2015 and is expecting more visitors, now offers a different travel challenge: the western state’s highways are vertiginous, only partially paved and under continuous reconstruction.

I spent a week in Chin in February with two friends. Travelling with a Chin guide, his girlfriend and a mechanic, we rode Kenbo motorbikes up and down mountains, across rivers, and through villages, from Mindat to Matupi and back, covering nearly 500 kilometres in seven days.

In our summit of Mt Victoria, we shared the road with other foreigners but for most of the trip we met none. Our week in Chin was a window into an ethnically, linguistically, and culturally diverse Myanmar that has so far kept its distance from the backpacker’s highway.

We knew that we wanted the challenge of exploring Chin, but beyond that, our plan was pretty formless. A Yangon-based member of our group, Zach, had a friend who’d trekked in Chin. She put Zach in touch with an experienced guide, Naing Kee Shein, who prepared a detailed itinerary.

He and Zach agreed on a price and finalised our travel arrangements. A few months later, Zach, Nick, and I were jostling around in a Mitsubishi Pajero, travelling from Bagan to Mindat, our base town in southern Chin.

Naing Kee Shein planned every stage of the all-inclusive trip. He booked every guesthouse, arranged every homestay, cooked every meal, and secured all means of transportation.

As his clients, we only needed to keep our eyes on the road, and get used to the idea that almost every moment of our trip would bring another surprise.

One example quickly comes to mind. Toward the end of our second day on the trails, we took a dip in a river and rode up one last set of switchbacks before stopping in the village at the top. Naing Kee Shein stopped outside a two-storey house. Its red and green wallboards shone in a setting sun, and in its lengthening shadow we stretched our backs and ran our fingers through our matted hair.

The house’s owner, a Roman Catholic who introduced himself as Paul, shook our hands and welcomed us, smiling broadly. He is a tribal representative for Mindat Township and runs a well-stocked convenience store in a corner of his house. He wore black, plastic-rimmed glasses and a thick, red turtleneck sweater. 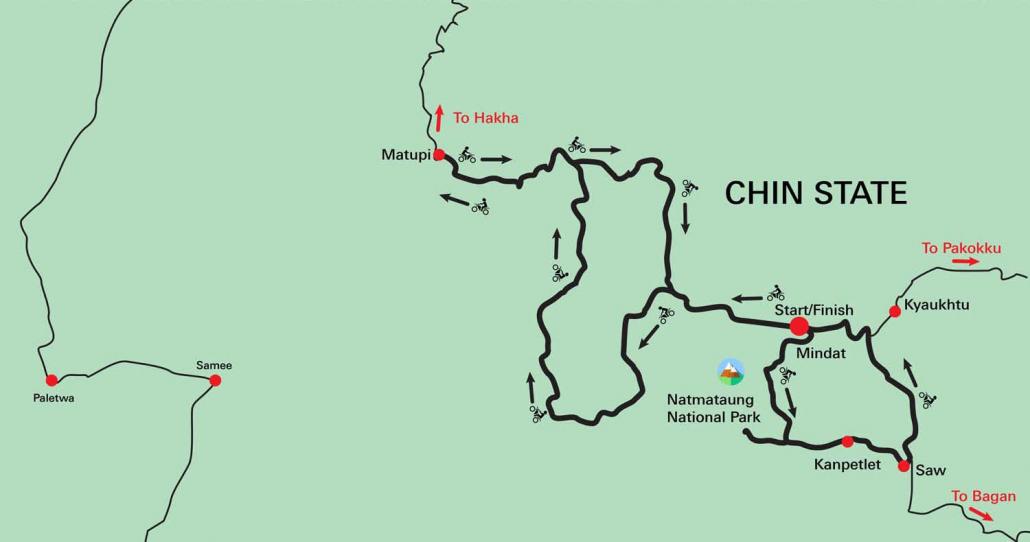 Map of the route

His wife and daughter, who carried her two-month-old in a sling, joined us for a short tour of the property. The family has a small mustard leaf garden behind a netting fence, and around it is a stand of sugarcane, about three metres high. The horns from a freshly slaughtered mithun, a species of domesticated cattle common in the region and over the border in India, had been left to dry on top of the concrete housing for the property’s water pump.

We noticed something we’d seen in other villages: an array of Y-shaped wooden poles planted in the hard dirt. Although Christian, many of the villagers we met still use these totems in ritual sacrifices, a vestige of animist beliefs. This was the first totem we’d seen bearing evidence of the practice. A piece of flesh hung from a string tied between the Y-shaped prongs: the gallbladder from the mithun whose horns were drying on the concrete.

We snapped a few close-ups and thanked Paul for showing us. He said something to Naing Kee Shein, who then asked if we’d like some sugarcane. “Sure,” we said.

Paul deftly cut one of the shorter stalks and chopped it into sections. The clean-tasting sugary water streamed down our chins and we savoured every fibre.

The next day was to be our longest. It involved 25km on trails and 100km on the main road to Matupi, the northernmost stop in our adventure.

We had just finished lunch when Naing Kee Shein stopped at the next village. The dust was still clearing as I dismounted and walked stiffly toward the source of his interest. A long-haired old man sat on his stoop, framed by his doorway. A small bow rested on his knees and he was fiddling with an arrow, trying to nock it to the bowstring.

Naing Kee Shein asked in Daai, a common Chin dialect, what he was doing. He was protecting his chickens, he said, nodding towards a few birds. A hawk had been picking them off and he was waiting for it.

His milky eyes scanned the sky for the hawk. The front wall of his house was decorated not with mithun skulls, which we’d seen elsewhere and is a sign of wealth, but with boar, monkey and musk deer skulls, their jaws lashed to the bamboo slats. We asked his age. “Over 100,” he said, according to Naing Kee Shein’s translation. Asked if he could remember the Japanese during World War II, the old man nodded. 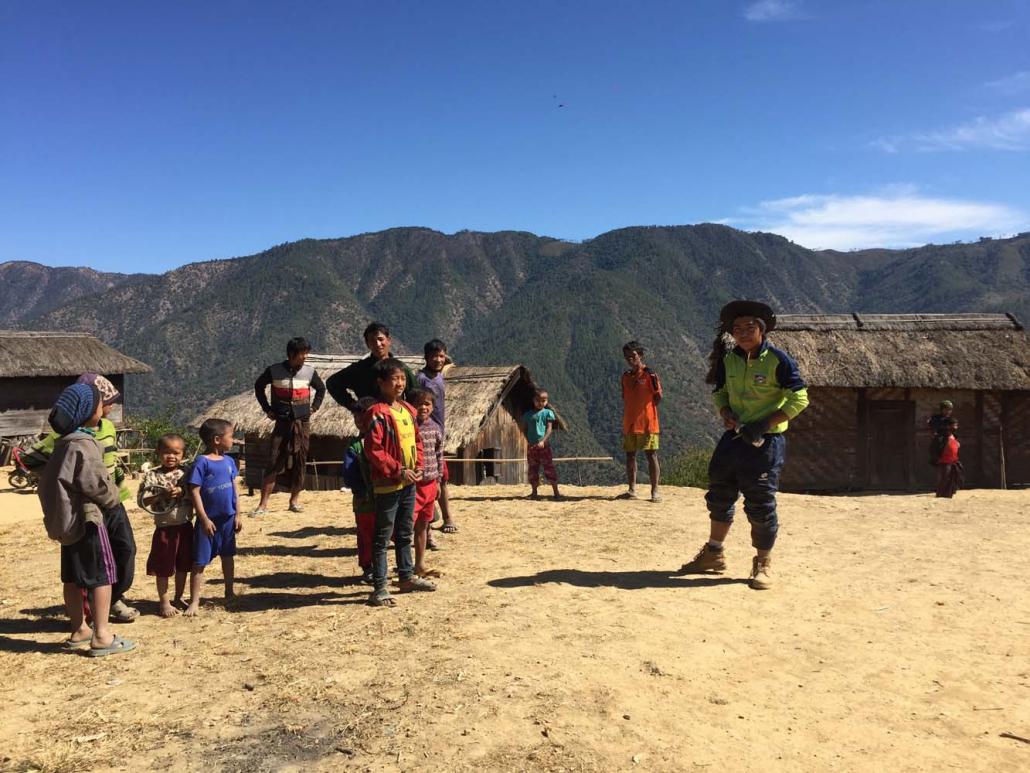 We waited for a while, watching for the hawk, and said hello to a group of children. The old man must have sensed that we were preparing to leave. He rose from his stoop, walked to each of us, and clasped our hands in farewell.

Onlookers crowded the windows in the houses behind us. We waved. Some of them waved, some laughed. As we donned our helmets and mounted our Kenbos, the old man resumed his seat, and scanned the sky.

Matupi was beautiful. We hiked to waterfalls and watched sunsets. We met workers at a hydroelectric facility and biked through an empty army training post. We took our time with breakfast. We took showers.

And then, just like that, it was time for the return journey. Despite the welcome rest at Matupi, the 160km journey from Mindat had worn us out. Even Naing Kee Shein sympathised.

We craved a flat, open, smooth road. A few days later, after summiting Mt Victoria, that’s what we got, about 15km from Kanpetlet.

Up until then, our motorbike journey had been characterised by rocky, narrow trails; low-gear creek crossings; tar fumes from the endlessly labouring road-building crews; and numb posteriors. Despite the adventure, it became exhausing after a few days. With our patience for these challenges running on empty, the fourth-gear-friendly stretch of tarmac came as a thrilling respite.

We had just crossed from Chin State to the flatter Magway Region. We drank some water, peeled off our flannel windbreakers and applied sunscreen. Thanks to Ko Ye Thu, our stalwart mechanic, my Kenbo was starting without protest. Following Zach and Nick’s lead, I cranked into the flat.

We passed palm plantations and sunflower fields, pagodas and tree-shaded village shops. The few cars we encountered acknowledged us with honks.

We leaned effortlessly into blind corners. Our tyres cut cleanly through the gravel at the shoulder, which at lower speeds might have been hazardous. A warm wind rippled through our T-shirts.

We were testing our luck. It was probably a good thing that Naing Kee Shein overtook us and stopped at the next petrol station. We ate some clementines and lemon-flavoured shortbread, washed down with toddy palm wine from that morning’s fermentation.

Then it was time to return to Mindat. It was the eve of the 70th Chin National Day, which the town would celebrate with speeches, parades, game booths and plenty of millet wine – and I, for one, was looking forward to the switchbacks.

TOP PHOTO: Almost totally off limits to foreigners just a few years ago, the mountains of Chin State are waiting to be explored (Zach Nelson | Frontier)