Behind the frontlines, as conflict flares in Kayin State

Fighting between the Tatmadaw, an ethnic Kayin Border Guard Force and a breakaway group from the Democratic Karen Benevolent Army has mostly subsided but the 4,000 people displaced are refusing to return home.

KAYIN STATE has benefited from the peace process and nationwide ceasefire agreement more than any other region in Myanmar; after almost seven decades the guns are mostly silent.

The combined Tatmadaw/BGF forces have seized a number of bases from the DKBA splinter group, and now control the strategically important road between Myaing Gyi Ngu and Mae Tha Waw, a village on the Thaungyin River, which divides Myanmar and Thailand.

There are about 20 villages along the Myaing Gyi Ngu-Mae Tha Waw road. These were formerly controlled by the splinter group, but are now in government hands. 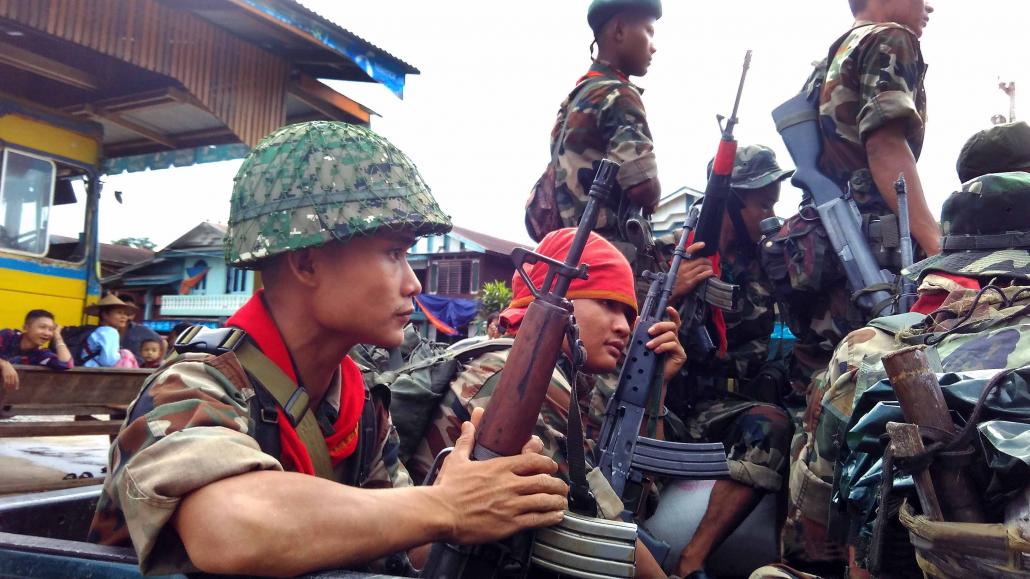 Frontier travelled to the area recently with BGF forces to assess the state of the conflict.

One DKBA base that Frontier visited had been the site of fierce fighting for three days, according to BGF soldiers. On top of a small hill, it featured a stupa and Buddhist hall.

There is an expression in the Kayin community: the grass gets trampled when two bulls fight. It is taken to mean that when two Kayin fight each other, the battle will be brutal.

The smell was overpowering; the bodies of two DKBA splinter group soldiers were still inside the hall. BGF soldiers buried them close to the pagoda.

The exact origins of the conflict are unclear. Captain Saw Ye Htet, an information officer with the splinter group, said fighting erupted because the Tatmadaw asked the DKBA splinter group to give up a base in an area under its control. When it refused, the Tatmadaw sent reinforcement to the area to exert pressure. Fighting soon broke out.

However, by other accounts the fighting started because the DKBA splinter group fired on the BGF.

The group had recently issued a statement warning that it planned to attack BGF positions because BGF troops were increasingly encroaching on its territory. When the BGF forces did not withdraw, they were attacked.

Regardless, the Tatmadaw and BGF have pushed the DKBA splinter group further into the jungle, and expanded the territory under state control. However, the splinter group remains an operational threat. Rumours that its leader, Colonel Saw San Aung, has been killed or seriously injured are untrue, according to Ye Htet.

“A column of our troops met him recently. He was neither killed nor wounded – he was alive and still active on the front lines,” he told Frontier by phone.

Ye Htet said the Tatmadaw and BGF vastly outnumbered the DKBA splinter group, so its troops withdrew and began fighting a guerrilla-style war, lying in wait and ambushing the advancing government forces.

“We need to protect ourselves and the forces are unbalanced so we had to use landmines,” he said.

He said it was too early for those displaced to return home because the fighting is continuing and the mines need to be cleared.

For now, the fighting has not spread to include other armed groups in the state. However, in an indication of the tense state of affairs in northern Kayin State, rumours have circulated that the KNLA has joined the fighting on the side of the DKBA splinter group.

The fighting is close to the proposed Hat Gyi hydro dam, which is under KNU control. KNU commanders are said to be worried that Tatmadaw forces will use the conflict as a pretext to gain control of the dam area. The chief of the KNLA has warned his troops to shoot if Tatmadaw forces enter the group’s territory, according to Karen Rivers Watch, an NGO close to the KNLA leadership. Neither the KNU nor KNLA could be reached for comment.

There is an expression in the Kayin community: the grass gets trampled when two bulls fight. It is taken to mean that when two Kayin fight each other, the battle will be brutal. They’ll use all their available weapons, and might end up killing each other.

The members of the Border Guard Force and the DKBA splinter group know each other well. At one point they all served at the former headquarters of the Democratic Karen Buddhist Army. Until recently, they met regularly at Myaing Gyi Ngu village. Even just a few weeks ago, they acted in a friendly way toward each other, said an ethnic Kayin woman who lives near Myaing Gyi Ngu monastery.

“We didn’t even know there was an issue between the two groups [the BGF and DKBA splinter group]. They met here sometimes and acted like very good friends,” the 50-year-old woman told Frontier. 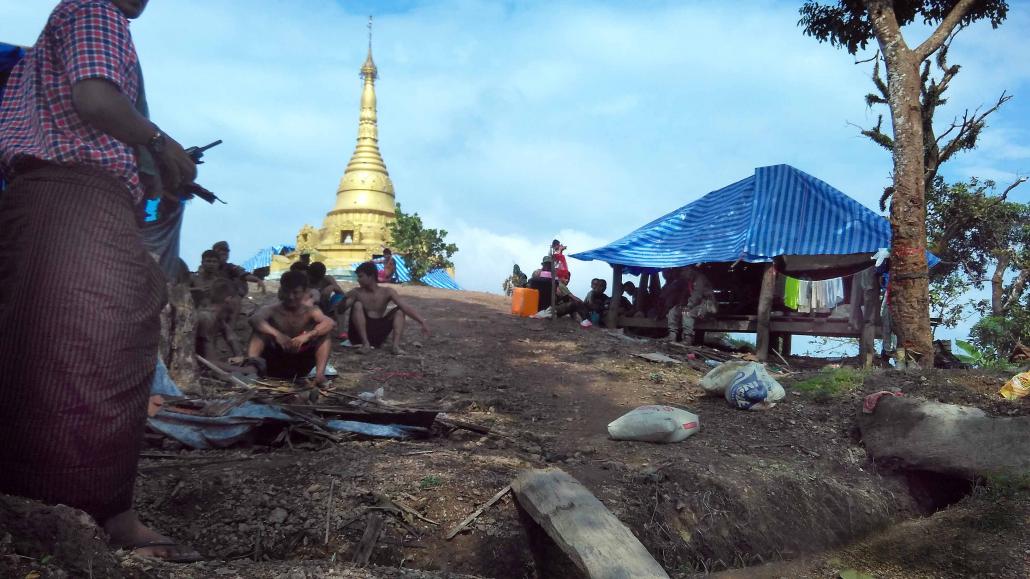 Another ethnic Kayin man sitting near her in front of the market in Myaing Gyi Ngu said, “The grass was trampled when these two groups were fighting.”

The hall of Myaing Gyi Ngu monastery is now packed with 4,0000 people – the trampled grass in this conflict. They were forced to flee the fighting. Now they live in the small hall, with no electricity and barely enough space to lie down. They are not happy to be there, but at least they are safe.

In conflict-hit Kayin State, Myaing Gyi Ngu is a refuge. Established by the monk U Thuzana – better known as Myaing Gyi Ngu Sayadaw – it is considered a place where a person can live in peace. That is, as long as they agree to follow the sayadaw’s rules: among other things, they must practice Buddhism, follow the Buddhist precepts, avoid violence and not eat meat.

U Thuzana is a controversial figure. He is closely associated with the DKBA and he is said to have encouraged Buddhist Kayin soldiers in the Karen National Liberation Army to break away and form the DKBA in the mid 1990s. In late 2015 and early 2016, he instructed his followers to erect stupas inside church compounds and near mosques in several villages in Kayin State and ignored pleas from various quarters to stop inflaming religious intensions.

Asked how many times he has fled fighting in his life, he said, “We often had to run in the past.” He pointed his finger to a nearby mountain range. “That’s where our village was. I came here to escape the fighting.”

He said the strict rules at Myaing Gyi Ngu are designed to ensure residents live in peace. “I’ve got used to it; it’s no problem,” he said.

A video posted to social media recently showed U Thuzana asking Colonel Chit Thu, the head of the BGF, to stop the fighting. He is shown saying in Kayin language, “My son, you should stop this fighting. Your action would not be proud or honourabe for your Kayin people.”

His warning went unheeded; the fighting soon broke out.

Although it hasn’t ended completely, the Tatmadaw has been pressuring the IDPs staying at Myaing Gyi Ngu to return home.

This is thought to be for operational reasons. The villages are more dangerous for the army when they are deserted; it gives opposition forces more opportunities to stage ambushes.

When Frontier visited, a Tatmadaw commander was attempting to persuade the IDPs to return. He held talks with community leaders and offered free transportation. He even stood up in front of the IDPs and made his appeal in person, promising them that it was safe to return home. So far, though, the refugees have refused to go back.

This is in part because U Thuzana has told them they should stay for at least five months. According to village leader Saw Aung Soe, an IDP staying in the monastery, the sayadaw said that their former homes were not safe at the moment because of landmines.

“They [the refugees] do not trust anyone else,” Aung Soe said. “They will only go back when Sayadaw [U Thuzana] tells them they should.”