Cartoonists, who have long played an important role in Myanmar’s society, say that an infamous defamation law is curbing their ability to do their job.

TERRORISM, armed conflict, drug trafficking and child soldiers. These are some of the subjects that Myanmar cartoonist Maung Maung Phaung Tain gets nervous about.

He wasn’t always so worried, but a spike in online defamation cases under the current National League for Democracy government has put him on edge.

The number of cases has increased since the NLD came to power in March 2016, raising concerns about a chilling effect on freedom of expression in Myanmar.

The charges have been filed using article 66(d) of the 2013 Telecommunications Law, a broadly worded law that prosecutes individuals for “extorting, coercing, restraining wrongfully, defaming, disturbing, causing undue influence or threatening any person” over a telecommunications network. The law holds a maximum sentence of three years’ imprisonment.

“It is quite complicated. So I seldom draw cartoons these days,” said Maung Maung Phaung Tain, who draws for several local media outlets.

So far the cases have been limited to mostly civilian critics, who have found themselves the target of a lawsuit after writing something negative about a member of the current administration, including the NLD or the military. But journalists and those in the media profession have also been targeted.

Poet Maung Saungkha, who spent six months in prison after being convicted under the legislation for a poem posted to Facebook allegedly about former president U Thein Sein, has formed a group to campaign against it while tracking the number of cases. He said that there have been 71 since the law was adopted in 2013, but only seven of them occurred under Thein Sein’s military-backed government.

Out of the total, 10 involve media professionals.

“The meaning of defamation is complicated. Criticism might be wrongly interpreted as defamation under this law,” he said.

Amid mounting threats of being prosecuted, cartoonists who spoke to Myanmar Now said they practise self-censorship and have also run up against resistance from editors worried about pushing the limits.

“I continue drawing cartoons without any defamation. But some editors refused to use some of my satirical pieces,” said Mandalay-based cartoonist Hlaing Myo. 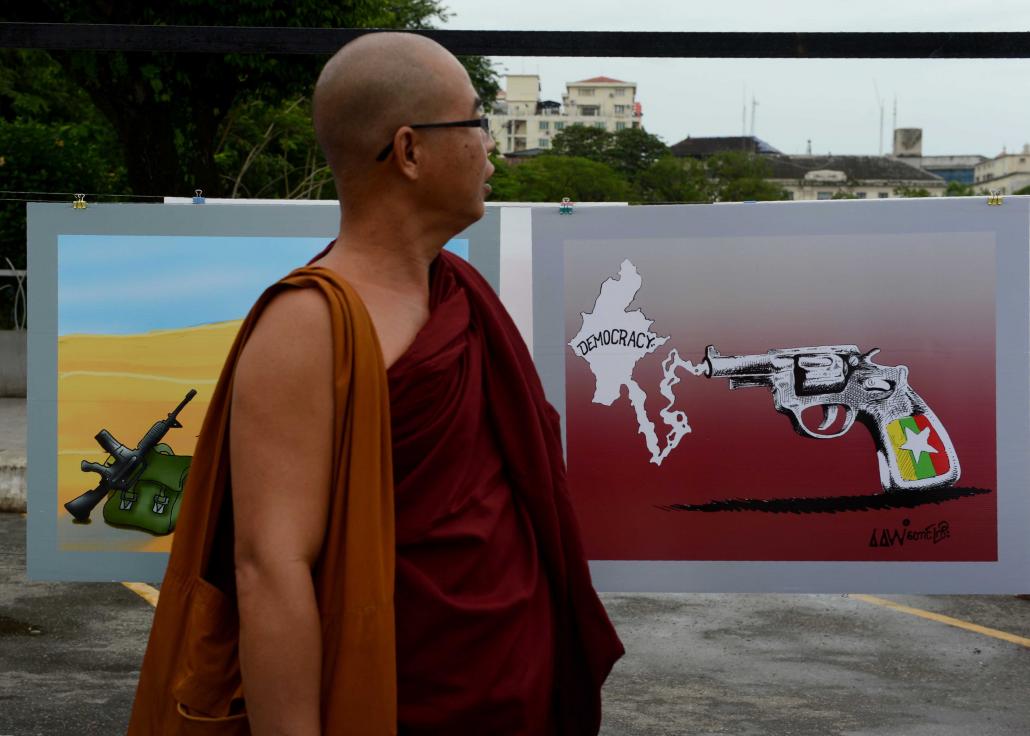 Cartoons have a long and storied history in Myanmar, with drawings capturing everything from the severity of military rule to the shortcomings of the democratic transition. The medium was particularly popular for satirising the military junta when it controlled the country.

But the rise of the web has threatened the survival of the art and created new fears of repression.

“Although I am drawing cartoons regularly, media editors rejected some of my pieces, and because of that I have lost confidence,” said cartoonist Nyi Pu Che. “They have full authority in choosing and publishing our pieces.”

Lwin Min Oo, editor of the Standard Time daily, said that while there are no restrictions on the types of cartoons the paper publishes, he doesn’t see many that intensely satirise the military or the government. However “they often criticise article 66(d)”, he said.

The government has not been in a hurry to amend or abolish the law, even as pressure is building to take action. On June 28 more than 60 local and international organizations signed a joint statement urging the government to repeal the clause.

“In the last year, we’ve seen an alarming increase in the number of people being arrested and charged for their peaceful online activities – in some cases, simply sharing images or articles which mock the military or the government,” Mr James Gomez, Amnesty International director for South East Asia and the Pacific, said in remarks accompanying the joint statement.

“This has to stop. The government must repeal or amend repressive laws to ensure that no one can be jailed for peacefully expressing their ideas and opinions.”

Cartoonist Nyi Htwe said that he also felt insecure after a spate of rejections, but he worried about the overall impact of a society that isn’t willing to tolerate satire, describing it as helpful criticism.

“The present situation is very intimidating for us,” Nyi Htwe said.

This article was originally published by Myanmar Now. TOP PHOTO: Cartoonist Maung Maung Aung draws a cartoon of a politician at his house in Yangon. (AFP)